The $143.5M sale in South Lake Union will raise millions for affordable housing, but what could Seattle accomplish with a little more imagination? 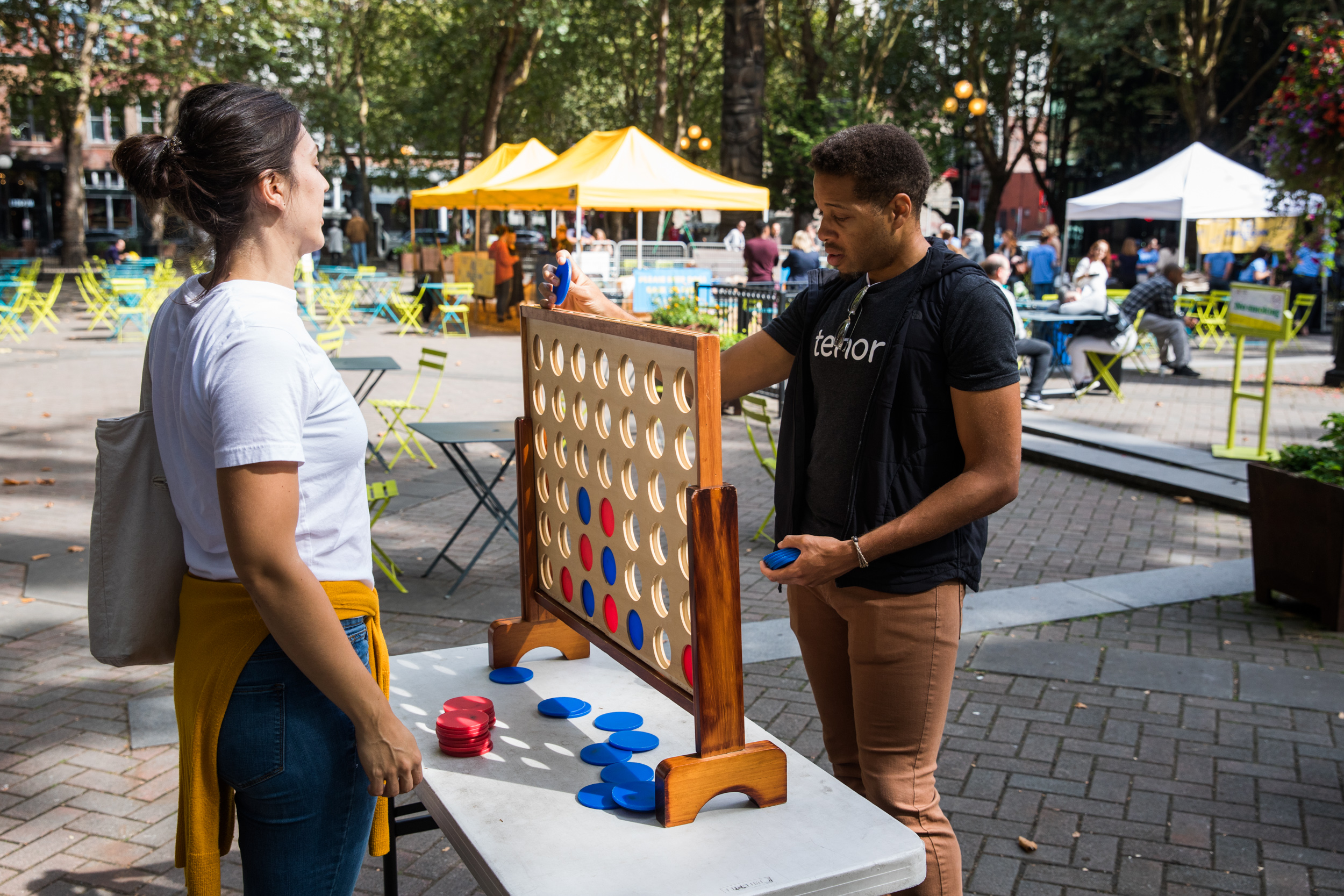 Sarah Schiller and Jeff Sinckler, visitors from San Francisco, play Connect Four together at Occidental Park in Pioneer Square, Aug. 23, 2019. "We were walking by and the park caught our eye so we stopped," says Sinickler. "It's really wonderful that there's all sorts of games to play together in the park." (Photo by Matt McKnight/Crosscut)

Time and again this summer I’ve found myself in Occidental Square, conducting meetings over coffee outside Grand Central Bakery, watching Megan Rapinoe rock the Women’s World Cup, or just catching a few moments in the sun. The Downtown Seattle Association has managed the park since 2015, through an agreement with the city. They didn’t kick the poor people out; instead, they created a space where people want to be and where everyone can co-exist. And you can do more than exist: You can play pingpong, foosball, cornhole. You can even take free dance lessons.

I believe the DSA, dominated as it is by large corporations and developers, behaved abominably during last year’s battle over the head tax. I am also deeply suspicious of public-private partnerships. And yet, every time I visit Occidental Square, I have to admit: The DSA has done a stellar job “activating” that space.

I got kind of the same feeling when I first learned the details of the city’s proposed sale of the Mercer Mega Block to the developer Alexandria. I don’t think the city should be in the business of selling off public land. And yet a deal like this is hard to hate. One lot will become housing, a mix of market-rate and units affordable to the people who work in South Lake Union as janitors and food service workers. The larger plot will be a biotech tower with a city-operated community center on the ground floor. In addition to making transportation improvements around the site and paying into the city’s Mandatory Housing Affordability fund, Alexandria will donate $5 million outright to the city for homelessness — money we can pray will not be spent on sweeps.

Then there’s what Mayor Durkan wants to do with the sale’s $138.5 million proceeds. Some of that would repay debt and another chunk is restricted to transportation projects, but the rest — $78 million — would be slated for housing in one form or another, including $57 million to acquire land for affordable housing and community-driven development near transit, particularly in communities at risk of displacement.

When you add up all the public benefits, Alexandria will pay among the highest prices per square foot for any property ever sold in South Lake Union. It’s as good a deal as one could reasonably hope for. And yet, I still can’t help but feel a sense of missed opportunity (full disclosure: I represent a group that voiced public concern about the project). This outcome points to a larger failure of imagination in how we think about public land and the role of government in addressing the housing crisis.

What if we didn’t view the Earth through dollar-sign-tinted glasses? What if we kept public land in public hands and actively strove to increase its total extent? It’s true that, even if the city wanted to develop thousands of affordable homes on the Mercer Mega Block site, it simply doesn’t have the funds. Unimaginable wealth courses through Seattle and yet we can’t seem to siphon off enough to fix the potholes, let alone guarantee that everyone has a place to call home. In this regime of artificial scarcity, selling off high-value parcels to the highest bidder and using the windfall to meet urgent social needs starts to feel not merely tempting, but almost like a moral necessity. But isn’t there an equally compelling moral necessity to reject that false choice?

From this point of view, the most intriguing part of the Mercer Mega Block deal is the land purchase fund, because it opens the possibility that the city could use this money to acquire as much or more land than was just lost. To me, this suggests a policy worth considering: no net loss of public land, in quantity or quality. The city would have to define “quality,” probably through some combination of suitability for housing or other public uses, and proximity to transit, jobs, parks and schools. Public land could still be sold, but only to acquire other land at least as extensive and useful.

But that’s just about holding the line. What could we accomplish with a little more imagination and ambition? Socialist-leaning urban policy nerds in the U.S. often gaze with envy toward Vienna, where over 60 percent of residents live in “social housing,” a legacy of radical municipal movements of a century ago. What if Seattle operated public housing for people of all incomes? Some remarkable things could happen. Higher rents could effectively subsidize lower rents, enabling low-income and maybe even permanent supportive housing to be sustained without continual infusions of tax revenue. Rather than segregating well-off and lower-income renters into different buildings, we could create truly mixed-income communities where no one pays more than 30 percent of their income in rent. And, to the extent that a significant percentage of Seattle’s housing stock became publicly owned, this would have a moderating effect on the private market, taming its worst excesses.

Unimaginable wealth courses through Seattle and yet we can’t seem to siphon off enough to fix the potholes, let alone guarantee that everyone has a place to call home.”

Of course, off-market housing doesn’t have to be owned by the government — it can also be owned by the people. Consider an example from our own country’s history. In the 1920s, immigrant garment workers in New York City, many of them Jewish communists, pooled their resources to build a vast cooperative housing development in the Bronx. It was called the United Workers Cooperative Colony, or “The Coops.” Other similar projects followed, creating communities of thousands. And these were, in many respects, truly communities, not merely housing: There were libraries and classrooms, cafeterias, space for youth clubs and for dancing. In the 1930s, The Coops welcomed Black families in an act of racial integration almost unheard of at that time. After weathering many storms, the project eventually succumbed to economic pressures and the erosion of its members’ radical vision. Still, today New York City has far more not-for-profit cooperative housing than anywhere in the country.

We can’t recreate the past and, really, we shouldn’t want to. If the instability of our time, and all of its human and environmental calamities, have any silver lining, it's a growing sense that a profound transformation of the social order is both possible and necessary. And people are walking through this door of possibility — heck, the Berliners are ready to start expropriating their landlords. Surely the least we can do here in Seattle is to stop auctioning off our public land. But it’s probably too much to expect our political leaders, consumed as they are with putting out the fires of the day, to make this a priority — unless a popular movement does so first.

The next time I find myself in Occidental Square, mingling with tourists, downtown workers and the down-and-out, listening to the city-sanctioned busker (paid a decent wage, I’m sure), maybe I’ll let myself dream bigger. Maybe I’ll let myself imagine what that park could become if we the people really got our act together.