The Crosscut Courage Award-winning ethnomuseumologist is spreading “Unspoken Truths” about the history of slavery. 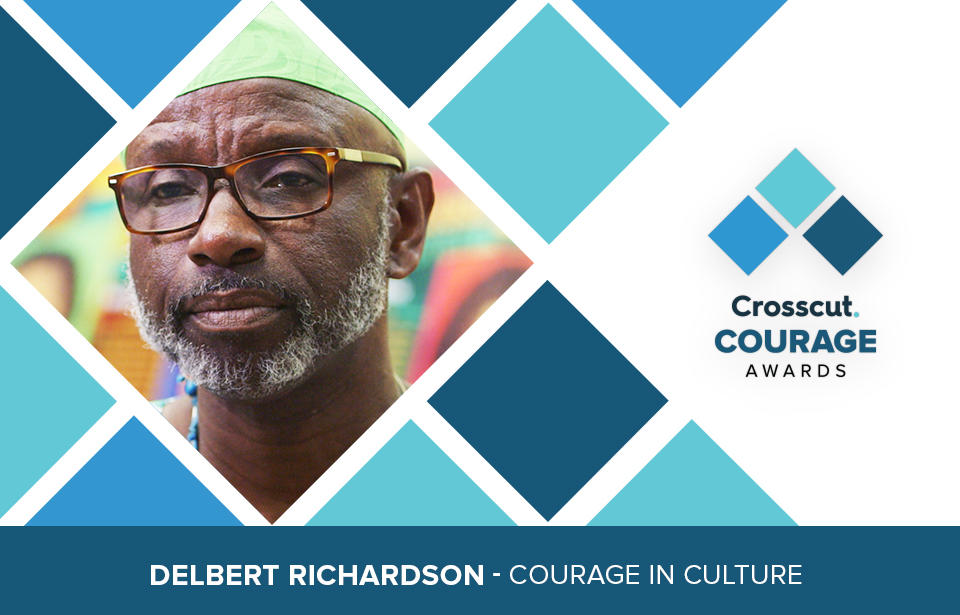 When Delbert Richardson was born, his father took one look at his skin and asked Richardson’s mother, “Is that the best you can do?”

It was a comment likely made in jest, Richardson acknowledges, but it mirrored a message that Black boys and girls have received from American society for generations: the lighter your skin, the more you are valued.

Like many Black Americans, Richardson, now 64, would live with this “less than” feeling for much of his life. It wasn’t until he started attending classes at the University of Washington in the 1970s that Richardson began to learn more about African culture and the systemic oppression of Black Americans. Later, Richardson would fuel his curiosity by collecting artifacts of bigotry such as signs directing Black people to “colored” restrooms, shackles and restraints used to keep slaves from escaping, and even a Ku Klux Klan robe. Richardson’s rich physical collection would come to dovetail with his desire to empower others. The result: a traveling museum combining these artifacts with group discussions designed to help people of all ages and races understand Black Americans’ cultural inheritance.

Richardson is the winner of Crosscut’s 2019 Courage in Culture award. He’ll be honored at the Courage Awards breakfast October. Seats and tables can be purchased here.

Many of the objects in Richardson’s “Unspoken” Truths American History Traveling Museum are scarring reminders of a sadistic past, such as a runaway slave collar and a branding iron. Just as many are meant to inspire.

“Do you know who this is?” Richardson asks a mostly Black crowd of 50 high school students in a summer program in south Seattle, holding a laminated photo of Mark Dean. Dean, a Black man, helped develop a number of landmark technologies for IBM, including the color PC monitor and the first gigahertz chip. Richardson asks the same question while presenting photos of astrophysicist Neil deGrasse Tyson and video game technology designer Jerry Lawson.

Few of the students recognize the names or photos of these Black inventors and scholars. Richardson is not surprised.

“We all know who Bill Gates is,” Richardson said. “But the accomplishments (of Black men and women) are never taught to us in school.”

‘I will see people in a different way’

Tilman Smith, an educator and anti-racism activist who works mostly with white people to reflect on internalized white superiority, recently collaborated with Richardson on a series of trainings for Seattle Public Schools. She’s continually impressed by his ability to create a space for participants to take risks, ask questions and be vulnerable.

“I have never seen him make anyone feel bad for asking what might be considered an offensive or naïve question,” Smith said. “His vision of liberation for children and for the world is so clear and genuine, that it enters people’s hearts and opens us up to transformational change.”

Richardson asks his visitors to fill out a three-question survey before they leave. He said the responses he receives to the survey’s second question — “What will you do differently as a result of what you learned?” — are his report card.

His most treasured responses: “I will respect people more.” “I won’t judge people.” “I will see people in a different way.”

A facilitator for difficult discussions

Richardson has brought his traveling museum to dozens of venues in the Seattle area, from middle schools to community centers to festivals. He’s found his most welcoming audience to be children.

“They’re curious,” Richardson said. “As adults, a lot of our values and beliefs have been framed by us and for us by our social constraints and lack of exposure. Children are still fertile ground.”

While engaging with children and young adults remains Richardson’s focus, his youth-centric presentations have recently evolved to include more workshops and trainings for adults. He recently took part in a series of presentations at Leschi Elementary in Seattle aimed at white teachers and parents, which centered on how racial bias presents itself in schools. It‘s a topic Richardson knows can be polarizing.

“My goal is to share information in a way that creates curiosity,” Richardson said. “Hopefully it encourages them to embark on their own journey of self-discovery.”

Donald Felder, a former Seattle teacher and principal who now coordinates race-related trainings in schools and communities, has seen Richardson’s museum bring together people from all cultures as they seek common ground.

“A community is formed for an honest dialogue about the nature of white supremacy and racism, and how it impacts the consciousness of Americans,” Felder said.

Expressions of anger and blame are common among those who view the museum’s artifacts and Richardson’s presentations, especially among Black visitors, Richardson said. But he welcomes the emotions, he said, because it means there’s opportunity for healing, and — more importantly — for empowerment.

“The museum creates a healthy space for difficult conversations,” Richardson said. “It’s almost impossible to be close to (the artifacts) and not experience some feelings.”

“But this is our history,” he said. “This is American history.”

For Thanksgiving, check out new Native art in Seattle

Plus, cultural things to do during these dark and stormy Seattle days.