Temple Beth Hatfiloh in Olympia took in an undocumented family on Thursday. It became the third religious institution in Washington state to protect individuals from deportation. 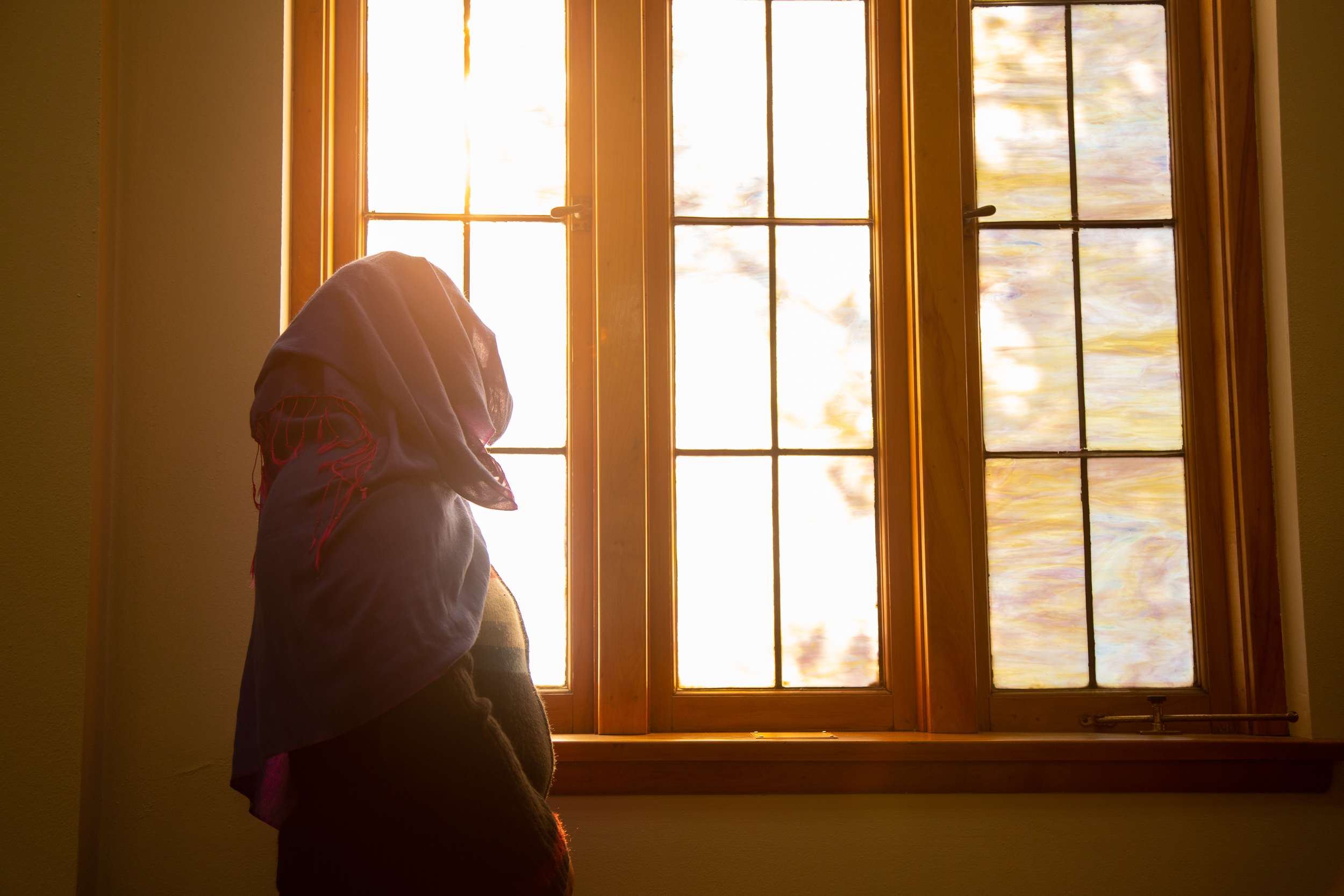 Maria Pablo, a scarf wrapped around her to preserve anonymity, stands in the sanctuary of Temple Beth Hatfiloh in Olympia on Sept. 5, 2019. An asylum seeker from Guatemala fleeing domestic violence, Pablo and her young son sought sanctuary in the temple after their petition for asylum was denied. (Photo by Jen Dev/Crosscut)

As a woman draped in a large purple scarf sat to one side, a rabbi wearing a yarmulke stepped forward to announce that his synagogue would shelter a survivor of domestic violence and her young son, saving them from deportation.

Anticipating the announcement, the dozens gathered at Temple Beth Hatfiloh erupted in applause before Rabbi Seth Goldstein had a chance to say a word.

As the applause faded, Goldstein explained that the Olympia congregation’s decision to take in Maria Pablo, a native of Guatemala, was dictated by both faith and history.

“Our Torah teaches over and over again that you should welcome and love the stranger,” Goldstein said.

The temple, just a short distance from the state’s Capitol, is thought to be the first synagogue in Washington state to take a family into sanctuary.

“We at the temple have received them with open arms,” Goldstein told those gathered at the synagogue late Thursday afternoon. As Goldstein spoke, Pablo sat quietly with congregants, her scarf covering here face.

In choosing to provide sanctuary to Pablo and her son, temple members considered the biblical story of the Exodus, when Jews were forced to flee Egypt in the hope of reaching the promised land, Goldstein explained.

More recent Jewish history was also front-of-mind for the congregation, Goldstein said, particularly the 1924 Immigration Act. The act, which restricted immigration from Eastern Europe to the United States, left European Jews trapped as the Nazis rose to power and seized the continent.

“The American Jewish community is a story of immigration, of fleeing oppression and hardship and seeking safety and security on these shores,” Goldstein said.

With regard to Pablo, Goldstein said she had applied for asylum but was denied. She plans to appeal the decision to the Board of Immigration Appeals, an executive branch court operated by the U.S. Department of Justice.

The decision to take in Pablo comes a year after Temple Beth Hatfiloh opted to become a sanctuary congregation, as hundreds of other faith communities across the country have in the wake of what they see as the Trump administration’s draconian immigration policies.

“We as Jews and as a faith community demand a different reality,” Goldstein said.

Religious spaces have long operated as safe houses. The Bible refers to churches as cities of refuge, where those accused of murder could safely await trial. In the 19th century, some American churches hid runaway slaves. In the 1980s, hundreds of churches supported the so-called sanctuary movement and sheltered Central American refugees fleeing civil war from deportation.

The U.S. Immigration and Customs Enforcement agency, or ICE, generally avoids churches because they are considered “sensitive locations,” as are schools and hospitals.

In an email, Tanya Roman, an ICE spokesperson in the Pacific Northwest, said of Pablo: "Unlawfully present foreign nationals are subject to arrest and removal regardless of how long they remain within a designated sensitive location ... Removal orders do not expire and the individual would remain subject to arrest and removal at whatever point they exit said location."

In Olympia alone, 16 faith communities, which refer to themselves as the Greater South Sound Faith Network for Immigrant and Refugee Support, have pledged support to congregations offering sanctuary.

“We are living in troubled times in this country, times that continue to see racist, xenophobic and violent rhetoric used to vilify both documented and undocumented immigrants,” said the Rev. Carol McKinley, affiliated minister at the Olympia Unitarian Universalist Congregation. “It is imperative that people of goodwill, people of faith, come together to challenge unjust, inhumane acts perpetrated in our name at the border — to offer sanctuary to those living in fear.”

Goldstein pointed out that the city of Olympia had itself become a sanctuary city in 2016, and that it had signed off on a charter of compassion. As a sanctuary city, Olympia police and city officials will not assist in enforcing federal immigration laws or inquire as to the immigration status of residents using most city services.

Jewish activists recently made headlines when they tried to shut down ICE by holding protests and barricading ICE headquarters’ doors, causing the office to close early.

Temple Beth Hatfiloh is the third house of worship in Washington state to take in people facing deportation.

Last year, Jose A. Robles became the first Washington man to take sanctuary in a church. In July, Robles, an undocumented father of three, stepped out of Seattle’s Gethsemane Lutheran Church for the first time since taking sanctuary and surrendered himself to immigration officials. He was detained and now sits at the Northwest Detention Center in Tacoma as his immigration case proceeds.

At the gathering at Temple Beth Hatfiloh, Michael Ramos, executive director of the Church Council of Greater Seattle, addressed Pablo in Spanish while he condemned former Attorney General Jeff Sessions’ directive preventing many victims of domestic and gang violence from gaining asylum.

“It is no secret that trauma does not discriminate,” said Ramona Ramírez of Cielo, an immigrant advocacy group in Olympia, as she paused, trying not to cry.

When asked about her new home at the temple, Pablo said she was “happy” for now.

Asked how long she planned to stay, Pablo, whose primary language is the Mayan language Mam, said that was “up to God.”