Saving the 'missing puzzle piece' to a world of biodiversity, hidden in grass and sagebrush

Once dominant on the landscape, Washington has lost most of its shrub-steppe ecosystem. But a new land acquisition could help the flora and fauna that rely on it survive. 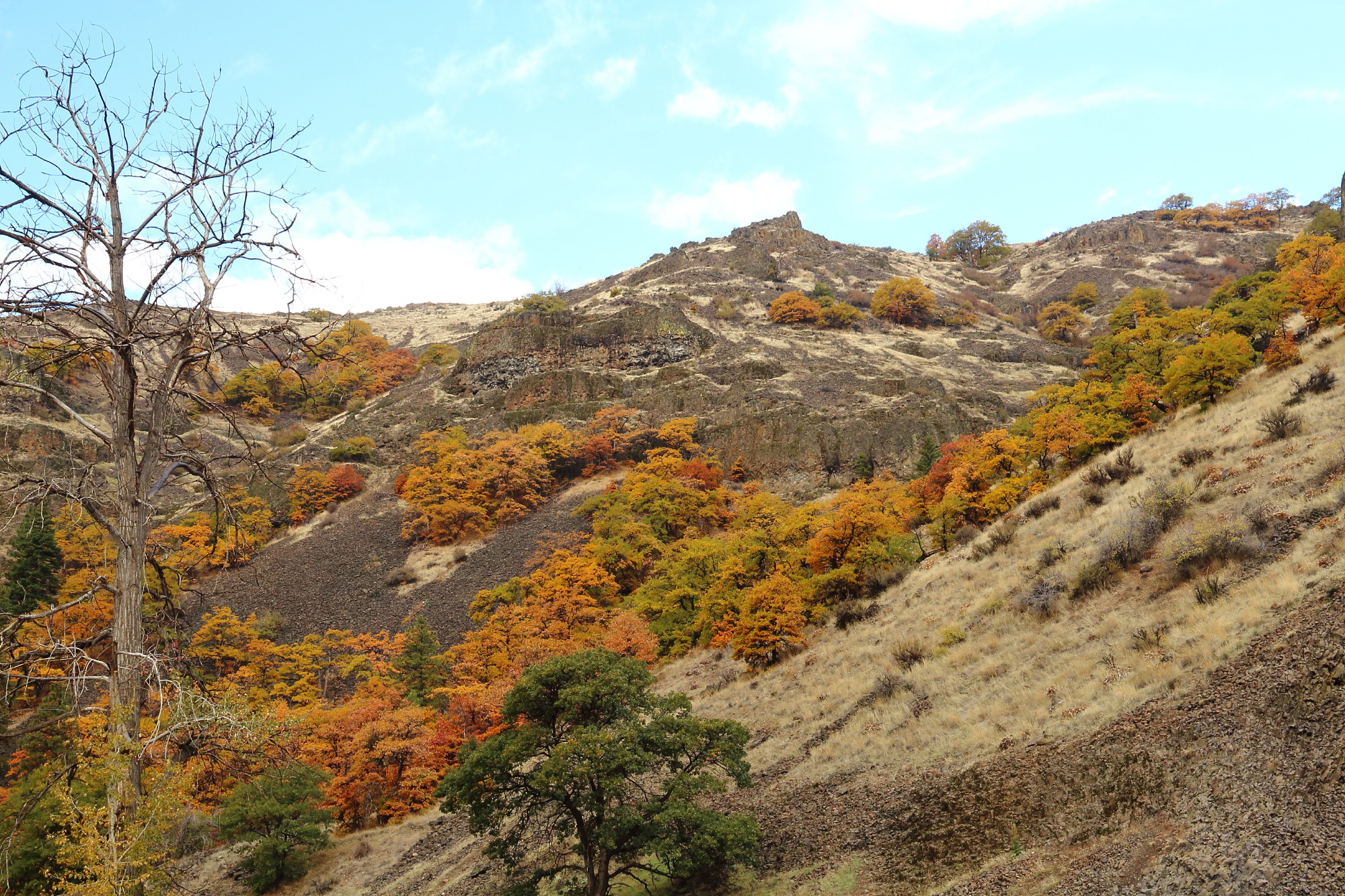 Most people experience Washington’s shrub-steppe as a yellowish blur on the sides of the highway from the eastern base of the Cascades down to southeast Oregon. From this vantage point, its homogeneity can make it seem bland and indistinct.

But walking through this ecosystem reveals something much richer and multilayered: It's mostly defined by sagebrush, but a diverse topography of canyons, creeks and rivers shelters native bunch grasses, shrubs and trees, with moss and lichen flourishing in higher-moisture areas. Bighorn sheep, elk, cougars and raptors make their home here.

Shrub-steppe was once an expansive ecosystem in Washington, covering one-third of the state. But with a high desirability for development and farming, it has shrunk substantially. After white settlers arrived in the mid-1800s, over 60% of the habitat disappeared. The U.S. Geological Survey has classified ungrazed shrub-steppe as critically endangered.

The land was purchased in conjunction with the Washington Department of Fish and Wildlife and the Rocky Mountain Elk Foundation, which have worked alongside community members over the past few decades to preserve this “missing puzzle piece” for Washington’s shrub-steppe.

Obligate species like sage sparrows and pygmy rabbits, which are dependent on shrub-steppe habitat, wouldn’t survive without it. But nonobligates like elk still rely on the shrub-steppe as one of the wide variety of habitats they need throughout their migration. These connected pieces of land also permit migration for smaller, less mobile animals like small mammals or reptiles.

It’s particularly important for a unique subset of flying migrators: Over 70 species of butterfly use this landscape for their seasonal travels. They’re attracted to the shrub-steppe’s multiple converging habitats, which provide diverse and plentiful food sources, as well as shelter.

“While we think about migrations being these big landscape traverses by large animals or birds flying to South America, these little butterflies are doing their own annual commute … from low elevation in the foothills to upper elevations,” Forterra CEO Michelle Connor says.

Connor says this newly connected wildlife area is one of the few places in Washington with a large parcel of shrub-steppe left intact. That’s essential for animals headed into an uncertain environmental future.

“It spans going up into the forests and into the foothills of the Cascades,” she says. “To be able to save a landscape that’s at this scale and connected — that’s the kind of thing that helps species survive and be resilient when you’re looking at a changing climate.”

National parks get a lot of attention when it comes to preservation, Connor says. But parks weren’t preserved just by chance.

“Somebody made a choice and worked really hard to create those special places,” she says. “So to be a part of this one feels like a legacy for future generations of Washingtonians and for all the creatures what will rely on that habitat.”

The previous landowners wanted to sell the tract in a single transaction. The state Department of Fish and Wildlife was interested, but the multiple budget cycles the staate required to facilitate the $3.55 million purchase kept the ranch out of reach, Connor says. The Rocky Mountain Elk Foundation and  Fish and Wildlife approached Forterra to step into that gap. She says the organization is still raising money to replenish those funds. Forterra holds stewardship over the land, meaning it can continue to work on restoring habitat, from preservation of creek and riparian areas to creating interpretive trails.

Forterra also maintains an ongoing relationship with the Yakama Nation, which previously had been involved in efforts to restore salmon and trout into Cowiche Creek.

Elizabeth Torrey is the assistant habitat program manager with the Department of Fish and Wildlife's Region 3. She was previously a habitat biologist with expertise in shrub-steppe habitat.

The reasons Van Wyk's shrub-steppe is so important begin at ground level: The deep soil of shrub-steppe habitat is vital for animals like badgers and burrowing owls, which need to dig burrows. The depth supports larger plants with long roots, such as sagebrush, which in turn creates perfect nesting habitats for birds like the Brewer’s sparrow. That deep soil is part of why shrub-steppe is now extremely rare: It’s also highly conducive to growing such crops as wheat and corn.

Above the deep soil lives the cryptobiotic soil. It’s a mix of fungi, lichens and bacteria that form a crust on the soil beneath shrubby plants. It can take many years to form and is important for conserving soil moisture and preventing erosion in high winds, but it is easily destroyed by footsteps.

Growing above the soil are native bunch grasses — including flowering plants like bitterroot, phlox and lupin — that support pollinators. In the next layer are shrubs most likely to be seen on hikes, like sagebrush or rabbitbrush. Cottonwoods, aspen and willows dominate the canopy, thriving in riparian areas, where they provide much-needed shade.

Cowiche Creek, a tributary of the Naches River, runs through the property. Riparian restoration has brought back chinook and rainbow trout and supports dogwoods, roses and willows. The Yakama Nation has long worked to reintroduce wild steelhead and coho salmon, which historically use the creek for migration. It started efforts in 2009, where it introduced up to 10,000 coho smolts a year to the watershed.

Forterra encourages visitors to come to Van Wyk Ranch and hopes to build interpretive trails and host volunteer events to attract outdoor enthusiasts. Fish and Wildlife's Torrey emphasizes that they can still preserve the land while appreciating its recreational value.

“All of this comes back to a very diverse and important habitat, an ecosystem which requires people to get out and recreate and observe in order to really appreciate all of the diversity and hidden life that you can find within it,” she says.

Climate change is a significant hurdle to preserving shrub-steppe and all that lives within it. As the climate warms and changes in ways we can’t yet quantify, Torrey says, retaining connected pieces of land creates resiliency by giving species more land, food sources, shelter and protection.

There are other threats. Invasive species like cheatgrass compete with native plants, degrade habitat and feed wildfires. Combined with human development, it’s more important than ever to protect the habitat, Torrey says.

“I think it is very urgent. We have several species in Washington that are extremely dependent on shrub-steppe and their populations continue to diminish,” she says. “If we want to continue to see those animals in future decades, and for future generations, we need to make sure that we're protecting and restoring what remains of this really important Columbia Plateau habitat.”

Bill Richardson, Oregon and Washington lands program manager of the Rocky Mountain Elk Foundation, says this strip of land is wild, open country that’s an essential beltway for elk to maintain uninterrupted migrations from the Cascades.

The blooming plants that are important for butterflies are equally important to elk, especially during calving season. It’s a natural place for them to pause in their migration, Richardson says, because of the quality of available forage. They give birth in spring, then rest for several weeks until the calves grow enough to follow the herd through the hills.

He emphasizes the negative impact of habitat fragmentation, which can include anything from recreation to development to fences blocking their migration route.

These herds are a key population of elk in Washington, Richardson says, as they cover a wide range from the top of the Cascades all the way to Oak Creek and Van Wyk. The benefits of a healthy elk population extend far beyond the shrub-steppe: When those elk migrate back into the Cascades, they become key prey for animals like cougars and wolves.

“We believe that all creatures belong in the ecosystem, but if you’re going to have your creatures be successful, they’ve all got to work together and be plentiful to sustain each other. If you want wolves to be successful, you've got to provide the prey species for wolves, and that's elk,” he says. “So this all ties together. It’s so important if you're going to have iconic species in the landscape.” 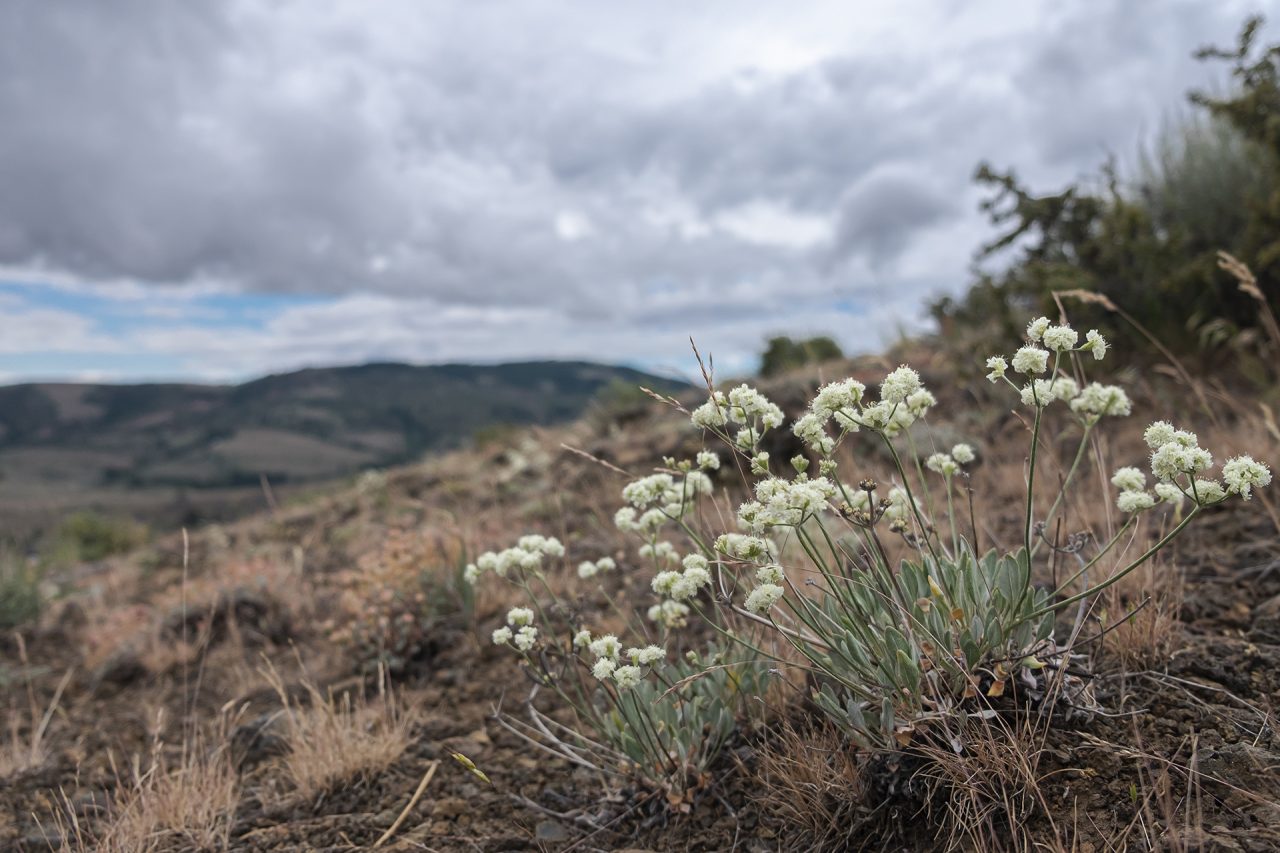 Spring blooming plants are vital for butterflies, birds and elk, who use them as natural resting points during migration, especially during calving season. (Carrie Hawthorne)

Spring blooming plants are vital for butterflies, birds and elk, who use them as natural resting points during migration, especially during calving season. (Carrie Hawthorne)