We might think of smoky summers as a new plague. But for centuries, wildfire smoke has been confounding Northwesterners, blocking sunsets and even sinking ships. 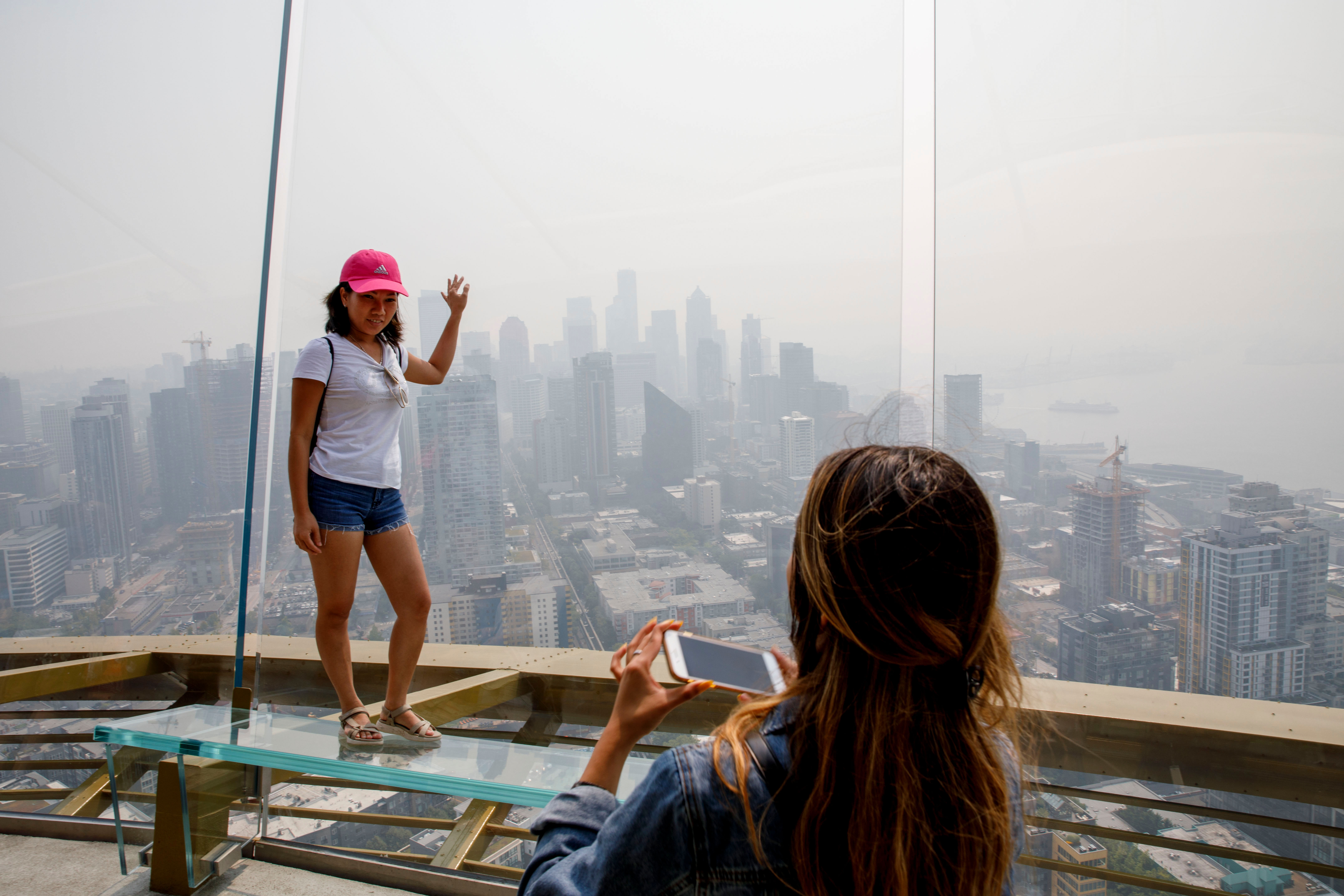 Hope Nguyen, left, of Houston has her photo taken from the Space Needle observation deck on Aug. 20, 2018, in Seattle. Haze from wildfires caused a decrease in air quality in the area. (Photo by Sarah Hoffman/Crosscut)

Wildfire smoke has been an unwelcome guest in Puget Sound the past two summers, with acrid, yellow smoke polluting the air and clogging lungs. Warnings about the health risks have been issued. Seattle is setting up filtered air "breathing rooms." Mayor Jenny Durkan has declared that Seattle be "Smoke Ready" as residents are told to expect more smoke, more frequently as the climate warms and Northwest summers get hotter and drier.

But wildfire smoke is not a new thing. Indigenous people throughout the Northwest used fire as a tool for hunting and agriculture. Tribes used seasonal burning to promote edible plants like camas and huckleberries to create open prairies for hunting game and to encourage the growth of oak trees.

Historians and foresters say accidental fires proliferated after European settlement, with blazes often ignited by pioneer hunters’ runaway campfires, steam engines on trains or logging equipment and land-clearing and timber-harvesting practices such as summer slash burns. Before the mid-20th century era of suppressing forest fires, seasonal fires and smoke — roughly from May to October — were common in the region, especially from the mid-19th century into the 1930s. Then, as now, smoke came from a variety of sources, including fires in Eastern and Western Washington, British Columbia, Alberta, Oregon, California, Alaska, even Siberia, depending upon the winds.

Historical accounts indicate the impact of smoke could be severe. Wildfire smoke was blamed for illness, damaging crops and impairing travel and navigation. It even prevented aircraft from finding their way and blocked the scenic views for summer visitors and VIPs (like Mark Twain). Haze obscured atmospheric phenomena such as a total solar eclipse and the Northern Lights. In at least one case, smoke was partly to blame for a collision of ships on Puget Sound, which resulted in the deaths of 16 passengers and crew.

Accounts in journals and frontier newspapers recorded the inconvenience, fear and other impacts of wildfire smoke west of the Cascades. The following is a sampling of descriptions of some of these events.

Great fires noted. “American maritime explorers, cruising along the coast near the present Oregon/California border … note smoke from great fires.” — Indians, Fire and the Land in the Pacific Northwest, edited by Robert Boyd, 1999

Puget Sound smoke. Capt. George Vancouver’s exploratory expedition of Puget Sound: “[w]e directed our route along the western shore of the main inlet [Possession Sound] … and as we proceeded the smoke of several fires were seen on its eastern shore.” — Vancouver’s Journals

Smoke protects us. “The country around us is all on fire, and the smoke is so great that we are in a measure protected from the excessive heat.” — Hudson’s Bay Co. factor’s journal, Fort Nisqually (near Tacoma), quoted in The Last Wilderness by Murray Morgan

“The weather is gloomy from the smoke around us.” — Hudson’s Bay Co. factor’s journal, quoted in The Last Wilderness

Smoke halts ships. A settler’s slash burn south of Beaverton, Oregon, swept from the Cascade crest and across the coast range to the Pacific. “The dense smoke was said to have made navigation on the Oregon coast so dangerous that ships remained at the mouth of the Columbia [River]. — “Fires in Western Washington and Western Oregon” by William G. Morris, Oregon Historical Quarterly, 1934

“Heaven’s aflame.” The Willamette Valley in Oregon is believed to have been very much shaped by indigenous burning. “[T]hose who lived here in 1849 tell of seeing the heavens aflame — lit until a pall of smoke settled on the world that almost smothered communities.” — Pioneer Days of Oregon History by S. A. Clarke

People getting sick from smoke? In September, the press comments on fires in southwestern Oregon’s Rogue River country. According to the Jacksonville Sentinel, “Never, since the white man trod on the sod of southern Oregon, has there been so much fire in the mountains as during the past few weeks. … Much of the sickness that prevails among us at present has been attributed to the heated state of the atmosphere and the immense volumes of smoke ever created by the vast fires.”

Smoked bacon-on-the-hoof. Heavy fires and smoke in Kirbyville, Oregon. According to an Oregonian correspondent with a sense of humor, “hogs are running around and smoke through and through — live, running bacon.”

A bad year for fires and smoke. Reports said residents of Olympia, Portland, and Oregon City had to use lamps in the daytime to carry on normal activities because the smoke was so dense and dark. — Accounts cited by William R. Morris, 1934

The Washington Standard of Olympia reported Victoria, British Columbia, papers were saying fires were doing considerable damage: “This probably accounts for the hazy conditions of the atmosphere hereabouts the past few days.”

Smoke obscures eclipse. An upcoming total eclipse of the sun on Aug. 7 was said likely to be visible in Washington, Oregon and British Columbia. “We trust that the smoke will clear away, and allow us a peep at this interesting phenomenon.” — Washington Standard

The Standard worried that smoke will obscure eclipse due that afternoon.

The Standard carried an account of the total eclipse as seen from Carlin, Nevada, but not Olympia.

Summer smoke is common. An issue of the Washington Standard in Olympia extolled the virtues of the region’s temperate climate, but acknowledged that summer smoke is a regular visitor. “[D]uring the summer months and till late in the fall, barring some smoky days occasioned by forest fires, we have the most genial and lovely weather anywhere prevailing on the continent.”

Dog days of smoke. An item in the Vancouver (Washington) Independent read: “The thermometer marked 84 on Thursday. The annual fires are burning in the forest and the air is becoming thick with smoke. Dog Days are fully initiated.”

Seattle gets smoke. The Puget Sound Dispatch of Seattle said, “Steamboat men report an extensive forest fire raging just beyond Alki Point. … At times yesterday the smoke in this city was very dense from this and other forest fires.”

Impenetrable wall. “Along the Bellingham Bay railroad, running from Sumas to Whatcom, the fires seem to be the fiercest. The smoke appears like an impenetrable wall, and, although the flames are not near enough to stop traffic, traveling under such circumstances is decidedly unpleasant, as it is almost as dark as night, with the heat and stifling odor of smoke added.” — Seattle Post-Intelligencer

Smoke hurts crops and views. Mark Twain’s visit to Puget Sound country was marred by heavy wildfire smoke that settled in over the region. In Tacoma, he joked, “Really, your scenery is wonderful. It is quite out of sight.” He also remarked in Olympia that he wasn’t bothered by the wildfire smoke because the cigar-loving Twain said he was “a perpetual smoker myself."

But the smoke had a worse impact than any inconvenience for tourists like Twain. The Seattle Post-Intelligencer reported on Aug. 15 that George N. Salisbury of the Weather Bureau reported on conditions impacting agriculture in Western Washington. It had been difficult time due to smoke, fires and heat. The headline above the report said it clearly: “Everybody Wants Rain.” It was needed to end drought, to put out fires and clear the air. 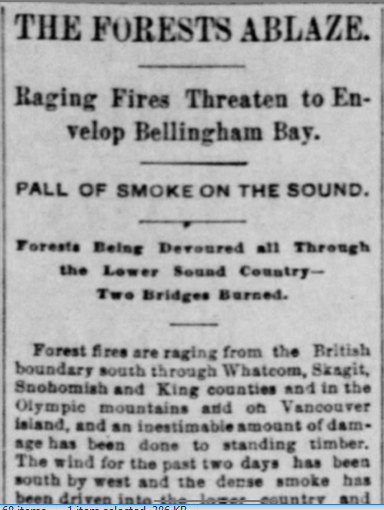 “The week has been one of dull smoky weather … the atmosphere has appeared very stagnant and oppressive, owing to the dense smoke that has so thickly pervaded the air from immense forest fires in the peninsula and other localities of the state. Not only has the sun been partly, and at times wholly, obscured by the smoke, but ashes and particles of soot have been deposited upon growing vegetation to such an extent as to injure it.” Grain and oat crops in Skagit and Whatcom counties were being impacted and fruit in King and Snohomish counties was “much injured by particles of smoke deposited upon it.”

The P-I reported on Aug.16 that “A Big Smoke Blanket” hung like “a pall over the entire state.” Some fires were close to home. Wooded areas around Seattle’s Green Lake and Magnolia Bluff down to Salmon Bay were reportedly burning, sending up “great clouds of smoke and cinders.”

Largely fire-free, but ... An Aug. 11 article headlined “Forest Fires Are Scarce” in the Seattle Post-Intelligencer indicated the region was unusually free of fires and smoke. The story begins, “There is general satisfaction felt among the railroad and lumber men at the scarcity of fires this year. Annually, the immense forests of Washington have fallen prey to the carelessness of hunters and campers. Each year millions of feet of valuable timber have been destroyed and many homes and ranches have been devastated. The air was murky, and tourists who came to the coast complained of the smoke and the inability to see the splendid sights that nature furnished.”

Wanton destruction. A July 12 editorial in the Seattle Post-Intelligencer lamented fire losses. “We have grown accustomed to those smoky days of late summer, and look upon them as a natural phenomenon. They are a sign of wanton destruction of valuable property.” The editorial argued for stricter laws and enforcement of them to prevent fires. 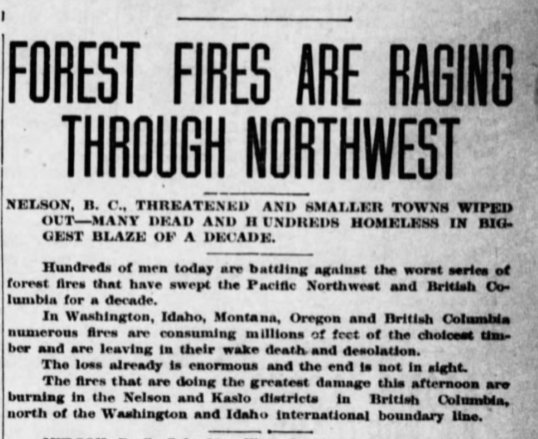 A terrible collision. In one of the single-most deadly incidents involving smoke, in the early morning of Aug. 24, the Seattle passenger steamer Admiral Sampson, bound for Alaska, collided with the Canadian steamship Princess Victoria in Puget Sound off Point No Point, near the northeast tip of the Kitsap Peninsula. The ships were traveling at low speed “in a fog and thick smoke from forest fires,” according to newspaper accounts. Sixteen passengers and crew from the Sampson, including the captain, died as the ship sank. The Princess Victoria stayed afloat and rescued more than 100 of the Sampson’s survivors.

No Northern Lights. According to an item in the Aug. 28 Seattle Star, locals had a bad view of the aurora borealis, the Northern Lights, because “They were dimmed Sunday night by forest fire smoke and fog.” Still a professor at the University of Washington said the lights would be visible the rest of the year.

Aircraft blinded by smoke. A Sept. 18 headline in Spokane’s Spokesman-Review read: “Mail Plane Wins Through/Follows Highway in Smoke on Portland-Seattle Run.” A Varney Airlines pilot “nosed his plane north through a blinding yellow-green pall of forest fire smoke and landed today at Boeing Field with the air mail. All available beacons and floodlights were used to guide the pilot to Boeing Field, the first time it had ever been necessary to use them in day time.”

Westside residents largely have been spared wildfire smoke this summer, but much of the planet, from Alaska to the Amazon, hasn’t been so lucky. Smoke used to be a regular visitor, and its absence shouldn’t be taken for granted, even if this summer gave us a much desired breather. History and future trends suggest we’d all be wise to keep masks and filters at the ready when summer rolls around again.