The tribe made history Nov. 1 by purchasing a 45-acre area surrounding Snoqualmie Falls for $125 million. Now it hopes to restore onsite representation and waterfall flows. 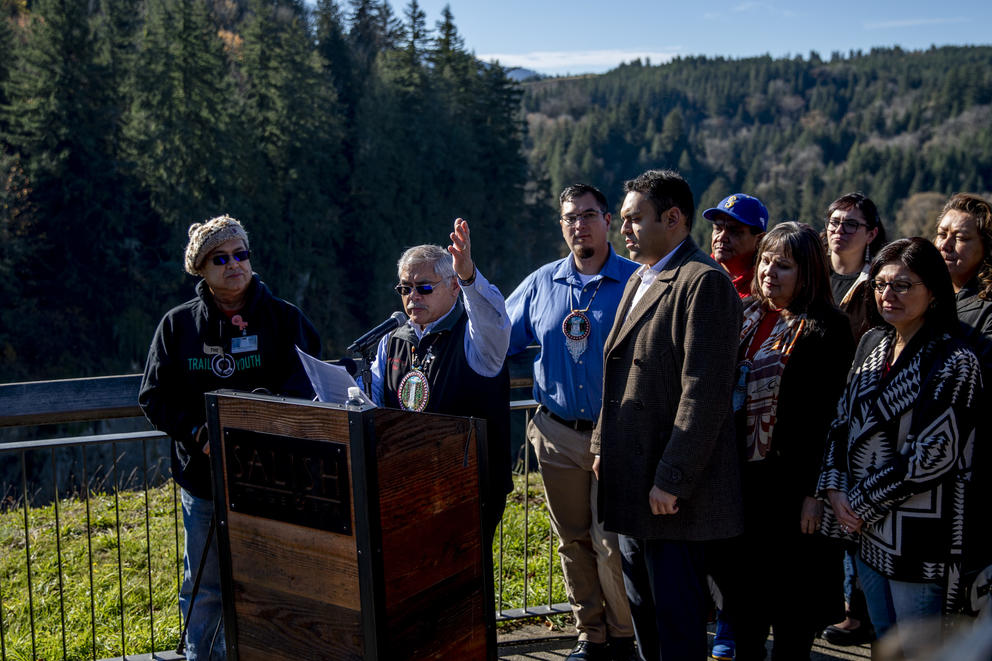 Snoqualmie Tribal Elder Lois Sweet Dorman says she’s been fighting for the preservation of Snoqualmie Falls for decades. Every inch of the surviving treeline surrounding it has had its protection lobbied for by the tribe, she says. The falls themselves are the tribe’s most sacred site: It’s always been important that the site, as the birthplace of her people, retains as much of its natural state as possible, Dorman says.

“That pounding of the water is a sacred cycle, and that pounding and the mists rising [are] a connection of worlds,” she says. The falls have been touted by tourists and advertisements for the city as its crowning natural glory since well before its appearance on the television show Twin Peaks, from which it’s now often recognized. In 1969, the city even considered renaming itself “Snoqualmie Falls” after its crowning natural feature.

Dorman says it’s easy to see why even non-Native people are drawn to the falls: “It’s part of why people visit here — they visit because there's a spirit here, the spirit of Snoqualmie Falls.”

With the Snoqualmie Tribe's Nov. 1 announcement that it had purchased the Salish Lodge & Spa and the 45-acre area surrounding Snoqualmie Falls for $125 million, developments planned for the area by the previous owner, the Muckleshoot Tribe, will not continue.

It’s the culmination of a 120-year effort. Since the first hydroelectric plant on the falls was built about 1898 (another was added in 1910) the Snoqualmie have fought to preserve the falls. Members of the tribe have prayed, protested and testified before Congress as part of their campaign. While efforts to save the area from further development have grown louder in recent decades, they haven’t always been successful: In 2015, the city of Snoqualmie began construction on a roundabout that the Snoqualmie Tribe claimed as the site of their ancient burial grounds.

“It was always the plan to protect it and be stewards of it, but 10 years ago we could never have imagined that we’d be able to buy it and own it,” Ross says. Since the tribe gained federal recognition 20 years ago, Ross says they’ve been able to raise the funds for the purchase.

“It’s hard to pay the descendants of the people who stole your land to get your land back,” he adds. “But that’s the world we live in, and those are the things that we have to do.”

For the Snoqualmie, reclaiming the land and resort surrounding the falls is only part of the equation. However, Puget Sound Energy, which currently operates both hydroelectric plants at the falls, signed a 40-year agreement in 2004 allowing the utility to continue power generation operations.

“We as a tribe protested [that],” Ross says. “That continues to allow them to divert 90% of the flow from the falls and use it however they need for their hydroelectric facility.”

Dorman says that, now, the only time you can fully experience the falls at full blast is when there’s flooding. The mist that comes up during these times is essential to the experience of them, she says, especially as it’s the mist that carries up their prayers to their ancestors. Without the falls running at their fullest, she says it’s harder to access that.

As PSE continues to divert water from the falls, Ross says the tribe's preservations efforts aren’t over.

“This purchase doesn’t affect it,” he says. “But it does give our voice more weight in talking to them in what matters to us.” 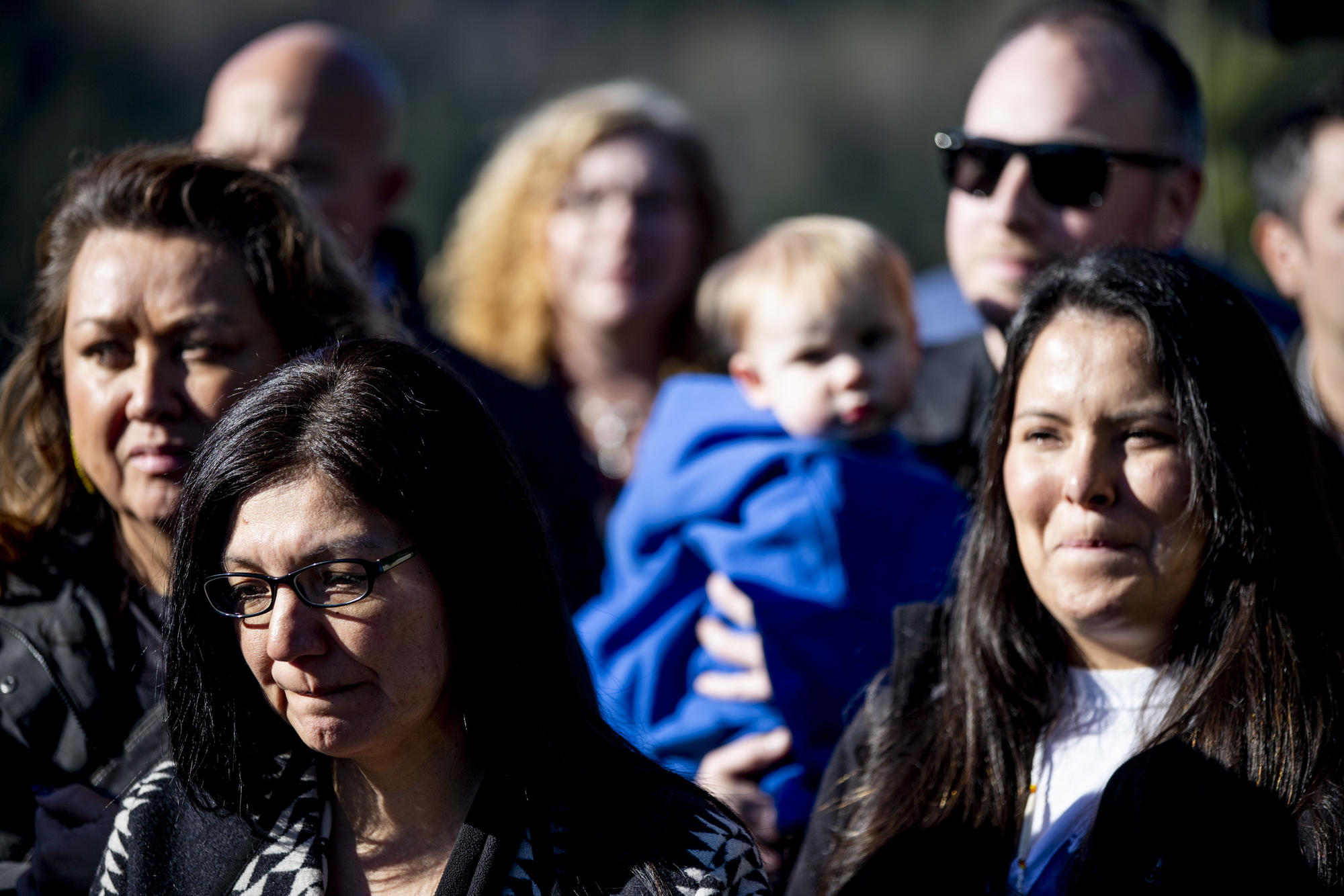 How to protect a sacred site

In recent years, other tribes in Washington have sought various forms of repatriation with some success. Famously, the prehistoric remains of a Native person known as Kennewick Man found in the region that includes the Confederated Tribes of the Colville reservation were returned to a coalition of Columbia Basin tribes in 2017 for burial after years of controversy. Another case involved the Lower Elwha Klallam Tribe on the Olympic Peninsula, in which construction on a bridge was paused and later permanently halted after hundreds of thousands of artifacts and human remains from an ancient Klallam village called Tse-whit-zen were discovered in 2003.

And last year, a 50-year lease on 35 acres of the Suquamish Tribe’s ancestral lands along the Port Madison Indian Reservation ended, returning ownership to the tribe. The area was originally leased out as a means of revenue for the tribe, whose officials saw it as the best course of action during a time of economic need. Suquamish Chairman Leonard Forsman says that the tribe plans to develop a “new modern Suquamish village” that would include housing and a health clinic. Forsman describes the development plans as a “real renaissance of the Suquamish people at their ancestral home.”

“I really credit our people for hanging in there and waiting this out … believing that we were going to someday achieve the dreams that our previous generations had for us to accomplish,” he says. Up until now, he says Suquamish-owned land has been scattered.

“For us to have a neighborhood that’s going to be near services, near the water, near cultural facilities — we’re really looking forward to reestablishing our presence here,” he says.

Ross, the Snoqualmie vice chair, says that in his tribe's case and in many others, it’s difficult to prove that a site is sacred: “The way the system is now, we have to find bones and remnants to prove anything.” It’s particularly difficult in the Snoqualmie Tribe’s case, especially because, as Ross says, their burials often happened above ground in trees, leaving little material evidence behind.

When construction of the roundabout on Snoqualmie ancient burial grounds began in 2015, some tribal members hoped that an artifact, a projectile point, found at the site would keep the area from being paved over. But a statement from the city at the time favored the opinion of outside archaeologists who said the find was an isolated discovery. The city of Snoqualmie continued construction. Now, as owners, the Snoqualmie Tribe can prevent further developments on their land.

Often, Ross says, the biggest issue in protecting sacred sites is getting non-Native people to listen.

“The mindset is their problem,” he says. “When I’m explaining to you or anyone else — PSE board members, politicians, anyone like that — when I tell them that this place is sacred to me, their eyes glaze over. They don’t know what that means. But if I tell them it’s a church or a steeple or something like that, then they understand.”

“They have to be open,” he says. “It doesn’t have to be a building, it doesn't have to have a cross, a saint doesn't need to be involved for it to be a sacred place.”

Ross and other tribal members say improved signage at the site can better public understanding of it. Since the first hydroelectric plant was built in the late 1890s, much of the narrative surrounding the falls has focused on the plant’s founder, Charles Baker; old Snoqualmie Falls brochures mention Native history only briefly. To this day, tourists can read the story of Baker on a display put up by PSE in the upper and lower park areas by the falls. (While one panel among a handful of others in the display tells the story of the falls as a nationally registered historic place and notes its cultural value to the Snoqualmie, some tribe members have expressed interest in adding more information about the site’s Native history.)

The continued fight for Snoqualmie Falls

Negotiations on flow have happened frequently in the past; PSE once offered to increase the flow for the Snoqualmie on requested days — one article from a 1994 copy of Earth Island Journal reported that PSE had offered to establish “Indian flow days,” where the falls’ flow would be increased with 24 hours' notice for spiritual needs, which the article says the tribe found “insulting and disrespectful.” PSE has also diverted less water from the falls during May and June since 2005 after a legal battle with the Snoqualmie Tribe.

“The current schedule of variable flow requirements throughout the year has changed the way that PSE uses the flow in the Snoqualmie River to produce power,” a PSE spokesperson wrote by email.

While Snoqualmie Tribal Chairman Robert de los Angeles and other members of the tribal council hope for a different agreement in the future, they’re also interested in taking steps to remind visitors of the site’s cultural significance in more immediate ways.

“We don’t want to change a whole lot,” de los Angeles says of the site. But, he adds, more context is necessary: “I’d like to see a lot more reference to our tribe and the cultural values that this area has to us.”

While the purchase of land is a huge step for the Snoqualmie Tribe, Ross hopes that it’ll help them in conversations with PSE, with whom they’ve been discussing issues for years.

“We’re going to preserve it the way it is,” he says, “but we’re going to share the Snoqualmie people’s story [and] educate people — how cultural significance and sacred sites are just as important as the Vatican is to Catholics.”