If Referendum 88 fails, what’s next for affirmative action in Washington state?

State officials are already working on ways to boost diversity in government hiring and contracting, two of the ballot measure’s key goals. 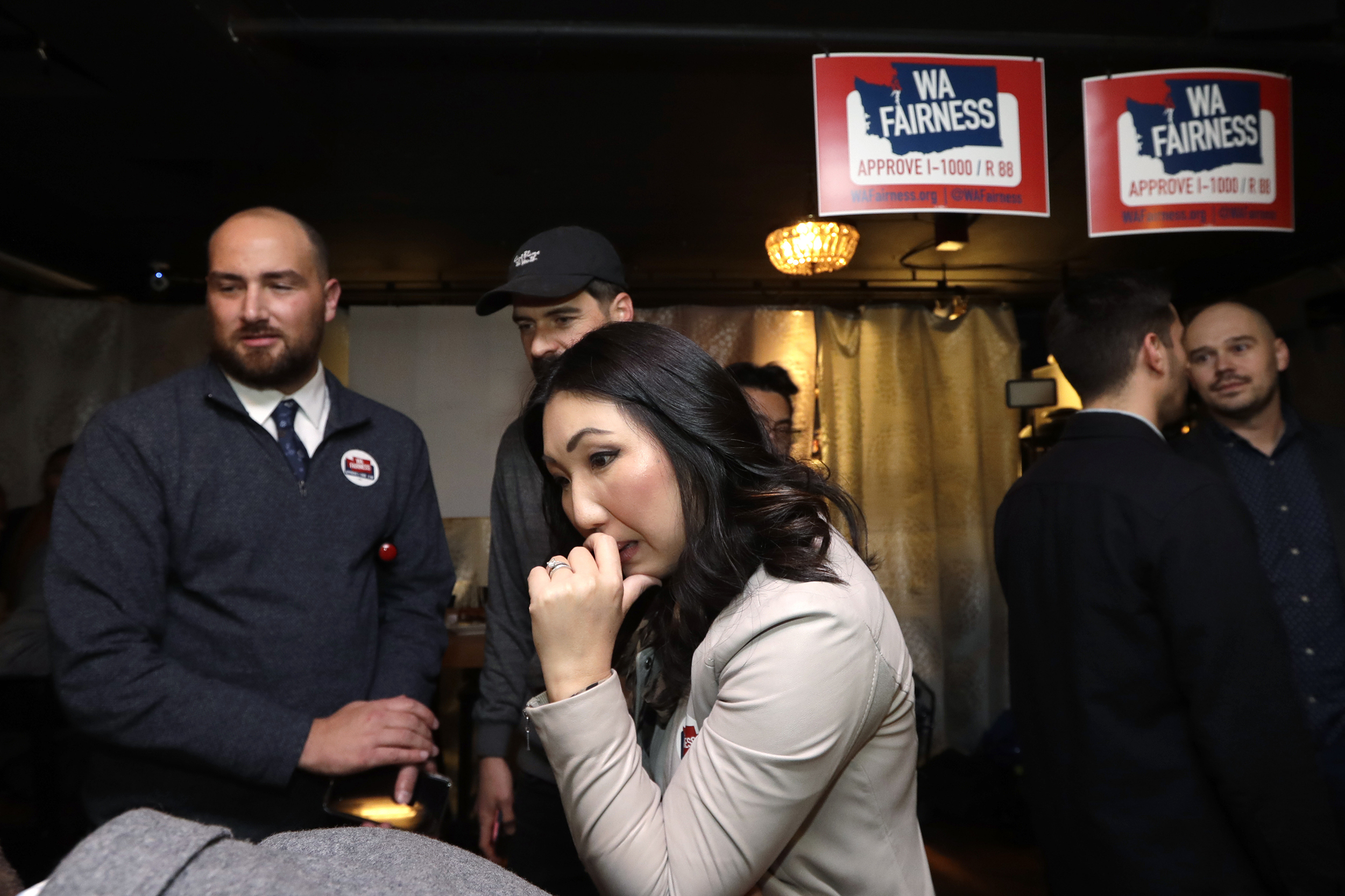 Hyeok Kim, center, a co-chair of the Washington Fairness Coalition, watches for early results at an election night party for supporters of Referendum 88, Nov. 5, 2019, in Seattle. Voters were deciding whether one's minority status should be considered as a contributing factor in state employment, contracting and admission to public colleges and universities. (Elaine Thompson/AP)

A measure to restore affirmative action in public programs in Washington state faced an uncertain future heading into the weekend. After the latest rounds of ballots were counted Friday, Referendum 88 was still behind by a small margin, with 50.3% of voters rejecting the measure and 49.7% approving it.

More ballots from Tuesday’s vote-by-mail election were expected to be tallied over the weekend and into Monday, with many coming from counties that haven’t favored R-88 so far, suggesting the measure would fall further behind.

Yet supporters of R-88 said that, even if the measure fails, they plan to pursue new strategies to boost diversity among state employees and government contractors — two of the ballot measure’s main goals.

If approved, R-88 would once again allow race to be considered as a factor in government hiring, contracting and public university admissions. A 1998 ballot measure, Initiative 200, currently limits the role that race, sex and ethnicity can play in those decisions.

Even with the election results still in up in the air, several efforts to increase diversity in state programs are already well underway, state officials said this week.

“In the scheme of things, all we are trying to talk about is creating a fair playing field, where small businesses that are women- and minority-owned have a fair chance to compete and grow,” said state Rep. Sharon Tomiko Santos, D-Seattle.

Since voters approved I-200 in 1998, the state has seen a precipitous drop in the number of certified women- and minority-owned businesses that receive public contracts, according to state data. In 1998, 13.31% of expenditures by state agencies and educational institutions went toward certified minority- and women-owned businesses. In fiscal year 2018, that percentage had declined to 3.6%.

Now, for the first time, the state’s Office of Minority and Women’s Business Enterprises is asking for significant new funding — about $1 million — to boost its outreach to businesses owned by women and people of color. The idea is to inform a wider range of businesses about state contracting opportunities that they otherwise might not be aware of, said Lisa van der Lugt, director of the office.

The agency is also asking for $1.1 million for a computer-software system that can help it track data on state contracts and who is receiving them. That will make it easier to see if the state is meeting its internal goals for improving diversity in contracting, van der Lugt said.

Another $1 million would go toward training agencies on how to increase diversity in contracting and reduce bias in the selection process.

The Office of Minority and Women’s Business Enterprises is now developing model policies to address some of the racial disparities found in the report.

Those policies can move forward whether or not R-88 ultimately passes, van der Lugt said.

RaShelle Davis, a senior policy adviser to Gov. Jay Inslee, said the governor is “strongly considering” including those diversity-focused requests in his 2020 supplemental budget proposal, which comes out in December. The governor’s budget plan then goes before the Legislature, which is scheduled to finalize a new supplemental budget by March.

In the meantime, state agencies are taking similar steps to try to increase diversity among their full-time employees.

Most of the initiatives the state wants to pursue can move forward whether or not R-88 passes, said Franklin Plaistowe, who directs the human resources division within the state Office of Financial Management.

Those plans include updating the agencies’ policies around diversity hiring and outreach; establishing training protocols on recognizing implicit bias in hiring; and ensuring agencies have goals for improving diversity in areas where they are falling short, he said.

“This is not quotas or hiring preferences, but it is just knowing what kind of numbers should you be looking at. And are you doing a good job of hiring a diverse workforce?” Plaistowe said.

If R-88 fails, it will restrict agencies from using diversity information when selecting between two equally qualified candidates for a job, Plaistowe said. But it won’t restrict agencies from improving diversity training and outreach, or analyzing why candidates of color aren’t making it through various stages of the application process, he said.

Right now, about 20% of employees in the state’s executive branch agencies identify as people of color, according to state data. By July 2020, the state has a goal of boosting the percentage of people of color and people with disabilities in leadership positions from 18.6% to 21.4%.

Already, legislators are talking about ensuring that state agencies get the money they need in next year’s budget to help them achieve those types of goals.

“We have the legal authority right now to recruit and encourage a pipeline of more diverse candidates,” said state Sen. Joe Nguyen, D-West Seattle. “There’s just no mechanism to fund that work and hold it accountable.”

State Sen. Rebecca Saldaña, D-Seattle, said she, too, wants to ensure agencies such as the Office of Minority and Women’s Business Enterprises “have sufficient funds to keep doing their work.”

If R-88 fails, the Legislature is unlikely to try to pass another measure in 2020 aiming to roll back the state’s longtime ban on affirmative action, Nguyen said.

The Legislature already attempted such a move earlier this year, when it passed Initiative 1000, a citizen-sponsored initiative that would have relaxed the affirmative-action ban.

Afterward, opponents of I-1000 quickly gathered enough signatures for a referendum effort, putting the policy before voters as Referendum 88.

As of Friday, the fate of R-88 — and by extension, I-1000 — had yet to be decided, though the numbers were looking increasingly bleak for supporters.

But it appears that even some lawmakers who opposed I-1000 might be open to increasing state agencies’ bias training and outreach efforts.

State Rep. Morgan Irwin, R-Enumclaw, said he is generally supportive of such measures. “Training on bias is one of those things I think we all need to do,” Irwin said.

When it comes to setting standards for improving diversity in different agencies, Irwin said he would be concerned mainly if agencies faced consequences for not meeting diversity goals, such as having their budgets cut.

He said he had worried that I-1000 would have set up “de facto quotas” because of the way it was written.

That was a key argument made by the campaign committee opposing R-88, a group called Let People Vote. Leaders of the group argued that the affirmative-action policy would draw distinctions based on race that were discriminatory and divisive.

Supporters of R-88, meanwhile, have said the measure is needed to open up opportunities to people of color, who historically have faced barriers in accessing jobs and educational programs.

As of Friday, supporters were still holding out hope that R-88 could pass, even as that outcome looked more and more unlikely. "I think by Tuesday, we will have a good idea of where we are," said April Sims, the co-chair of the Washington Fairness Coalition, which urged passage of the measure.

Plaistowe, the human resources division director at the Office of Financial Management, said whatever happens, his team is ready to work on improving diversity efforts within the bounds of current law.

"My intention is to move quickly once we know the results," Plaistowe said. "The plan is to move forward — whatever the landscape is."