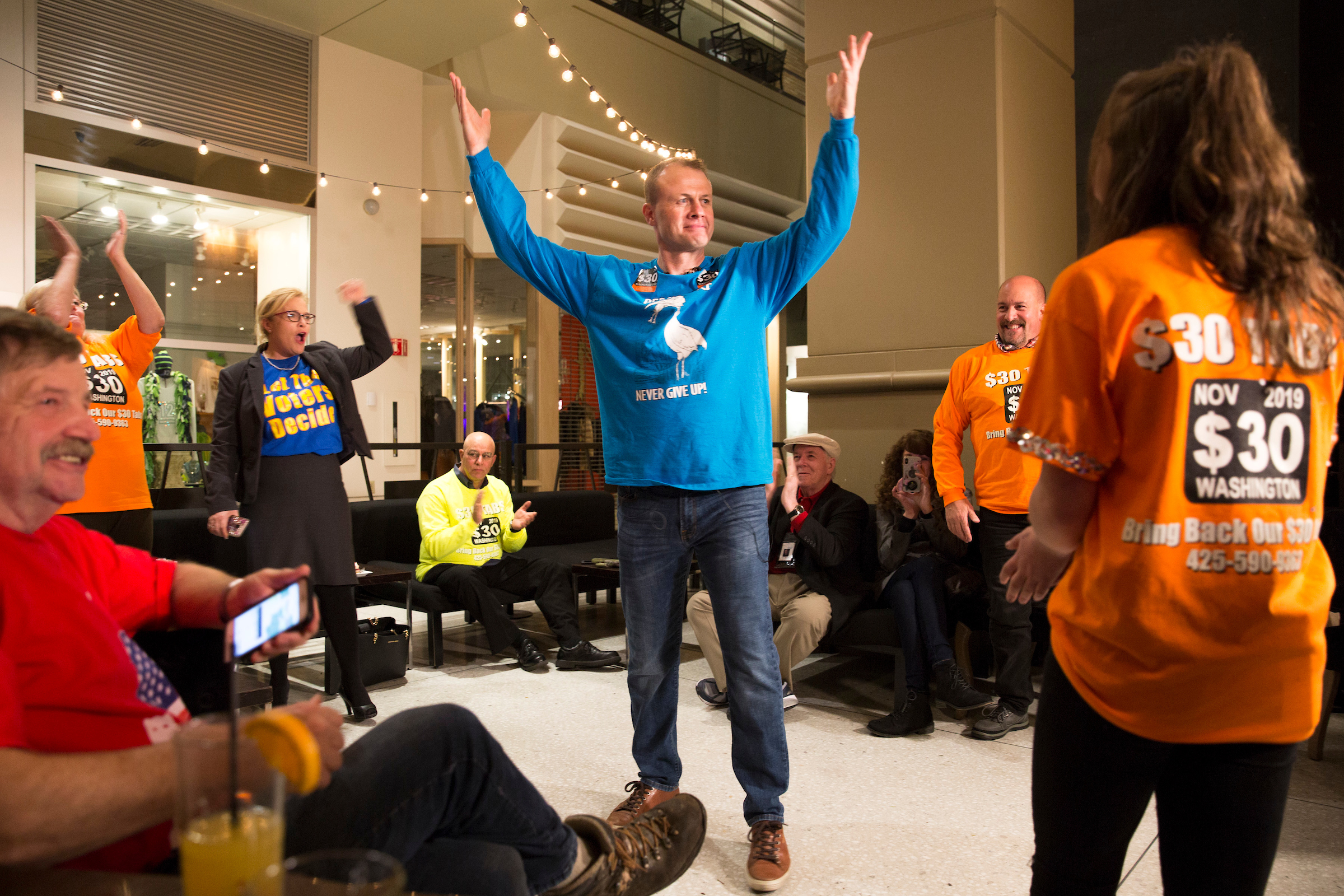 Initiative 976 sponsor Tim Eyman and supporters react to early positive returns during an election night event in Bellevue on Nov. 5, 2019. The initiative would reduce car-registration fees that are paying for new light rail projects in the Puget Sound region, while eliminating local fees that pay for bus service, road maintenance and other transportation needs in cities throughout the state. (Jason Redmond for Crosscut)

Washington voters didn’t seem eager to lift a statewide ban on affirmative action, based on Tuesday night’s early election results. But they appeared more than happy to reduce what they pay in car-tab fees, voting in favor of Initiative 976, the latest proposal from Tim Eyman to reduce annual vehicle-licensing fees to $30.

In early returns from Tuesday’s election, Referendum 88 — the affirmative-action measure — was falling short of passing, with more than 51% of voters rejecting the measure and less than 49% voting to approve it.

Many ballots have yet to be counted. But if those results hold, government agencies will continue to be prohibited from considering race as a factor in decisions about hiring and contracting, as well as when offering admission to public universities.

Meanwhile, I-976 was passing by a clear margin Tuesday night, winning more than 55% of the vote. The measure reduces state and local car-tab fees to a flat $30, while also eliminating a 0.3% sales tax on vehicle purchases.

I-976 is the latest proposal from perennial initiative promoter Tim Eyman, who has previously sponsored other successful measures to reduce annual vehicle registration fees.

The new measure takes particular aim at Sound Transit 3, which voters in the Puget Sound region approved three years ago to extend light rail throughout Pierce, King and Snohomish counties. The transit package relies on higher car-tab fees, as well as increases in sales taxes and property taxes, to finance about $54 billion in projects over a 25-year period.

All along, Eyman was confident that frustration with Sound Transit’s taxes would lead voters to approve his latest measure. So confident, in fact, that he delivered a victory speech at about 7:45 p.m. Tuesday, declaring the measure a success before the earliest vote counts were even released.

After reviewing the results later in the evening, Eyman said he was thrilled that voters statewide were approving I-976 by a similar margin as they approved his first $30-car-tabs initiative back in 1999.

"It is really gratifying that it's been 20 years and the voters are saying, 'We still support it,'" Eyman said.

Sound Transit officials estimate that passage of I-976 will cost them about $20 billion through 2041, which they say could delay voter-approved transit and light rail projects. Some of that projected revenue loss will result directly from the cuts to car-tab fees, the agency estimates, while the rest will come from increased financing costs.

Under I-976, about 60 cities will also lose the ability to impose car-tab fees to pay for local projects, such as increased bus service and road maintenance.

All told, a state fiscal analysis estimates that I-976 will cause state and local governments to lose about $4 billion in revenue for transportation projects over the next six years.

Fear about what that could mean for the region’s transportation system prompted businesses to contribute more than $3 million to try to fight I-976. Microsoft and Amazon were the top donors to the campaign to defeat the measure, joining labor groups in urging voters to reject it.

The No on 976 campaign — which spent $4.4 million, as of the latest public records — ran TV ads focusing on how the measure would hurt transportation infrastructure around the state.

Eyman has said that approval of I-976 won’t cause a transportation crisis, but instead will force government agencies to prioritize their spending and stop taking advantage of taxpayers.

Eyman has been particularly critical of how Sound Transit calculates annual car-tab fees. The agency uses an outdated vehicle valuation schedule from the 1990s that overestimates the value of vehicles in their first 10 years of life, leading to higher renewal fees than what drivers might expect to pay.

Though the Legislature approved a different, more accurate vehicle-valuation schedule in 2006, the bill that lawmakers approved in 2015 to authorize Sound Transit 3 continued to rely on the outdated formula.

"I think voters said, 'This is just a fundamentally dishonest tax, and  I can’t endorse having a dishonest tax like that,'" Eyman said Tuesday.

In a statement, King County Council Chairman Rod Dembowski said the county will work diligently to prevent cuts to services such as Metro bus lines. "While I-976 is a roadblock, I am committed to immediately going to work to mitigate the worst of its impacts," Dembowski's statement said.

Passage of I-976 will similarly create complications for the Democratic-controlled Legislature. The measure will affect some of the state funding that currently goes toward the Washington State Patrol and the state ferry system. Lawmakers may have to scramble to fill some of those holes when they reconvene in January.

Should I-976 continue to lead in later election returns, opponents will also most likely launch a legal challenge seeking to invalidate some or all of its provisions.

The Legislature tried to reinstate affirmative action on its own earlier this year. In April, lawmakers passed Initiative 1000, a citizen-submitted initiative that would lift the longstanding ban on considering race in government employment, contracting and education programs.

Opponents of the initiative, however, quickly gathered enough signatures to force the measure to a referendum vote. That referendum is what voters had the chance to weigh in on Tuesday.

While the affirmative-action measure was trailing by about 3 percentage points on Tuesday night, supporters of R-88 said they were still hoping that later ballot counts could shift the results.

"We’re cautiously optimistic," said April Sims, co-chair of the Washington Fairness Coalition, which had urged voters to approve the measure. "We think there are still lots of votes to count in King County and we are carrying the county by a pretty comfortable margin."

"I don’t think either side is going to sleep well tonight," Sims added.

Opponents of the measure also said it was too early to call the race, but that they were confident the measure would ultimately be defeated.

"We are encouraged by the early numbers and will watch closely as additional ballots are counted in the coming days," wrote Linda Yang, a member of the committee urging voters to reject R-88, in an email.

Approval of R-88 would mean I-1000 would go into effect as the Legislature intended. A “no” result would block the measure from becoming law, leaving in place the current ban on affirmative action in government programs.

Supporters of R-88 cite data showing that fewer certified minority- and women-owned businesses have received public contracts in the two decades since Washington's affirmative-action ban went into effect. According to state numbers, at the time the ban was passed in 1998, 13.31% of expenditures by state agencies and educational institutions went toward certified minority- and women-owned businesses. In fiscal year 2018, that percentage had declined to 3.6%.

That steep decline has caused small minority- and women-owned businesses to lose an estimated $3.5 billion in revenue over the past 20 years, according to the Office of Minority and Women’s Business Enterprises.

"It's important for the state in terms of restoring fairness and opportunity," Sims said. She said the measure would also help make the state's colleges and universities "more representative of the communities they serve."

But those who sought to overturn I-1000 say that returning to a system where race plays a role in college admissions and hiring decisions would be divisive and discriminatory. Some of the leaders of the opposition effort are Chinese immigrants, who say Asian students will be at a disadvantage if affirmative action is reinstated, particularly when it comes to college admissions.

While I-1000 contains language specifically banning the use of racial quotas, opponents of the measure said it would end up relying on quotas anyway, despite past U.S. Supreme Court decisions that have found such quota systems illegal. Supporters and opponents of the measure also disagreed about whether the affirmative-action measure would reduce certain advantages that military veterans already receive under current law.

Thomas Jarrard, a member of committee urging a "no" vote on R-88, said he thinks military veterans turning out to oppose R-88 contributed to the results seen on election night.

"It's always hard to predict the future, but I’m really pleased with the turnout of Washington state veterans,“ said Jarrard, who serves on the board of the Washington State Veterans Bar Association. "If it keeps following this trend, there’s not going to be a real chance for King County to wipe out that 25,000-vote lead."

Correction: An earlier version of this post misstated the amount of money spent by opponents of I-976. 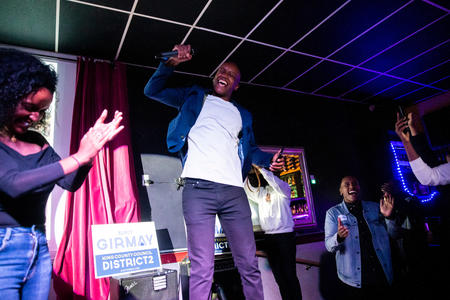 Gossett, the civil rights icon who has been a mainstay on the council for 25 years, was trailing by 14 points.

Gossett, the civil rights icon who has been a mainstay on the council for 25 years, was trailing by 14 points.