A group called Washington Asians for Equality is leading the charge against affirmative action this November. It's not their first fight. 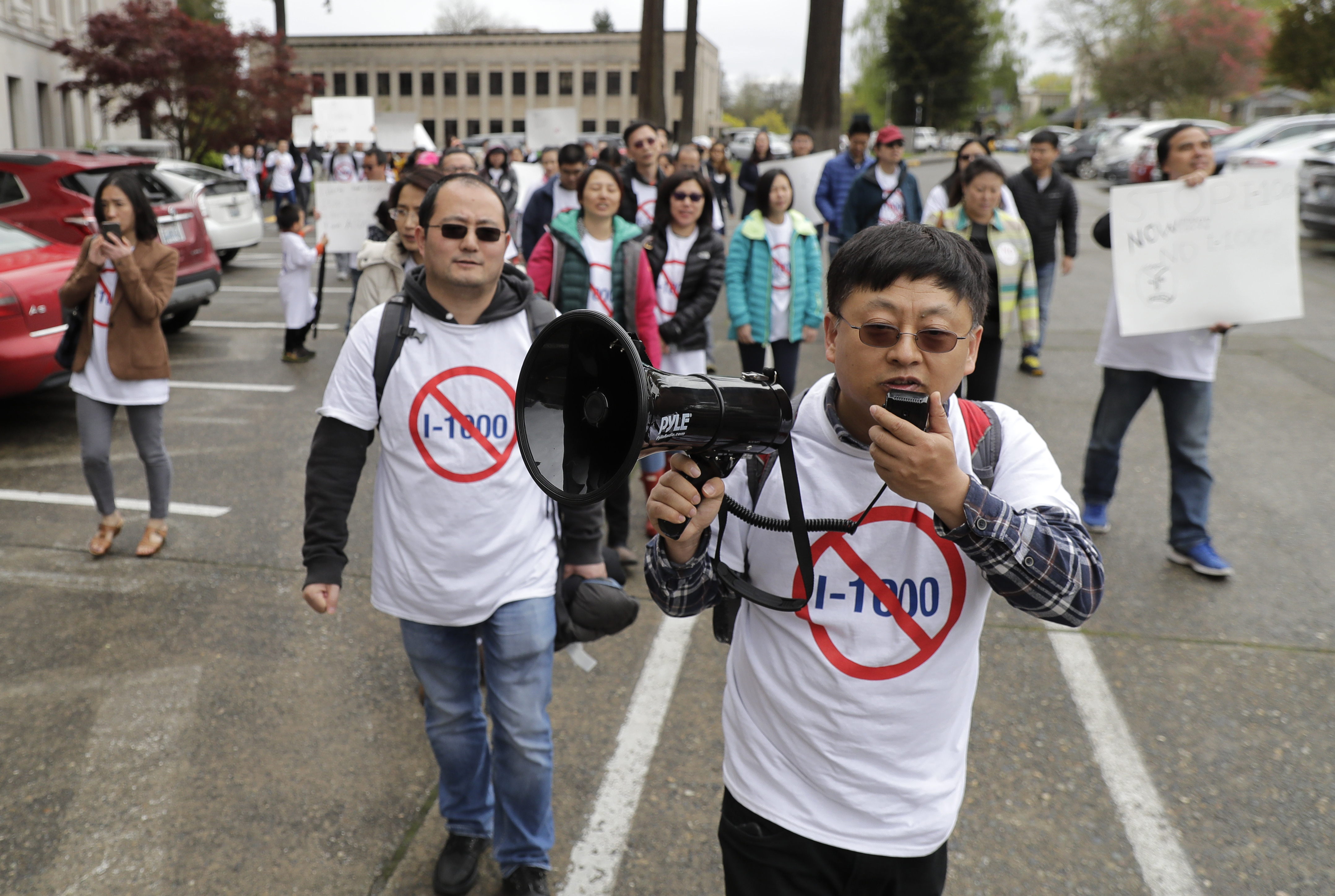 Protesters opposed to Initiative 1000, including Kan Qiu, right, chant and march at the state Capitol after a joint committee meeting held on the initiative on April 18, 2019, in Olympia. Several members of the group spoke in opposition to I-1000, which would allow the state government to use affirmative action policies that do not constitute preferential treatment to remedy discrimination in public employment, education and contracting. (Photo by Ted S. Warren/AP)

Last year, Kan Qiu stood before members of the Bellevue School Board and made a bold demand: Get rid of the school district’s Department of Equity.

“I call for the disbandment of the Equity Department and make the district accountable to the taxpayers,” Qiu told the board members in April 2018.

Qiu and other members of his group, Washington Asians for Equality, frequently attended Bellevue School Board meetings last year to oppose the district’s development of a new racial-equity policy. Qiu and other members of the group said such a policy would focus inappropriately on students’ race, resulting in racial divisions and unfair treatment.

A year and a half later, Qiu is making a similar argument to voters throughout Washington state. He is the primary sponsor of the effort to overturn Initiative 1000, an affirmative-action measure the state Legislature approved in April.

The initiative relaxes Washington state’s 20-year ban on the use of affirmative action in government employment and contracting, as well as in admission to public colleges and universities. It does not allow race to be used as the sole factor in hiring or admissions decisions, however, and includes language banning the use of quotas.

The latter outcome is what Qiu and other leaders of Washington Asians for Equality are hoping for.

The group was key in ensuring the referendum would go before voters, helping collect and deliver the 130,000 signatures necessary to place the measure on the ballot.

Looking back, Qiu said some of the group’s early efforts opposing the equity work of the Bellevue School District helped mobilize local parents, setting the stage for the larger fight against the statewide initiative.

“It helped build up the base to oppose I-1000," Qiu said of the group's confrontations with the school board, "because they were not listening."

Some of the parents who showed up to those Bellevue School Board meetings ended up testifying before a joint legislative panel earlier this year, speaking in opposition to I-1000. Several have since donated to Let People Vote, the committee Qiu now manages that is urging voters to reject R-88.

In both settings, the parents — many of whom said they were Chinese immigrants — claimed it would put Asian Americans at a disadvantage if government officials began looking at racial identity when making decisions.

While testifying against I-1000, several members of Washington Asians for Equality expressed concern that I-1000 could make it harder for high-performing Asian American students to gain admission to state universities.

In Bellevue, meanwhile, members of the group had criticized the district’s equity work as trying to force identity politics into schools. At times, Qiu and other members of Washington Asians for Equality questioned why the school district offered mentoring programs specifically designed for Black, Latino, Native American and Southeast Asian students, instead of geared more broadly toward students of all races and ethnicities.

Jie Xie, a Bellevue parent who said she came to the United States from China about 10 years ago, called the district’s proposed racial equity policy “divisive.” She later testified against I-1000, and has donated to the campaign to reject R-88.

“Nowadays all children have equal access to the public education in this country, regardless of their skin color,” Xie told Bellevue School Board members in 2018.

She said she didn’t understand why district officials wanted to bring race back into the conversation.

“Do not just subscribe to a single story: race,” Xie said, adding, “Would you judge your kid’s school performance by their skin color?”

But Tim Mills, former superintendent of the Bellevue School District, said that over time, the district found students of certain racial and ethnic groups were not experiencing the same academic outcomes as their peers of white or Asian descent. Like it or not, those racial disparities were part of the district’s story, he said, and something district officials wanted to change.

“Bellevue was very definitely changing in terms of student population,” Mills said in a recent interview, referencing how the district has become more demographically diverse. “There were some subgroups of students where it was obvious that we needed to do a better job in terms of the educational process.”

Similar achievement gaps were seen among Bellevue’s Latino students, as well as among those who identified as Native Hawaiian or Pacific Islander.

After the Bellevue School District created its Department of Equity, the district’s overall academic performance did not decline, contrary to claims made by Qiu and other members of Washington Asians for Equality. The district’s four-year graduation rate has risen from 88.9% to 92.7% since 2013, while student test scores in math and reading are higher than they were five years ago, according to district and state data. Black students’ test scores also have improved, though some of the district’s other ethnic and racial groups haven't seen the same progress.

State Rep. My-Linh Thai, D-Bellevue, served on the Bellevue School Board through November 2018, when she left the board after winning election to the Legislature.

While on the school board, she said she had numerous meetings with members of Washington Asians for Equality to discuss their concerns about the district’s work on racial equity.

In particular, Thai said members of Washington Asians for Equality worried the district’s equity focus could lead to fewer spots for Asian students in the district’s highly capable program. Members of the group had previously raised similar concerns when state lawmakers considered a policy to increase access to highly capable classes, as well as when the Northshore School District took steps to diversify its gifted program.

In response, Thai said she told members of Washington Asians for Equality that the district has an obligation to meet the needs of all of its gifted students. That means if more students are identified as gifted, she said, the district is supposed to serve them all, not cut anyone out.

At the same time, Thai said she told the parents that the district had an equal obligation to help the other students being left behind. To her, that meant making sure students of all races and ethnicities have their needs met, she said.

She said she doesn’t see those kinds of targeted efforts as disadvantaging anyone else.

That was where she and members of Washington Asians for Equality seemed to disagree, Thai said.

“A question being asked to me at a personal level was, ‘My-Linh, why are you doing this? You are Asian, you are supposed to fight for us Asians,’ ” Thai recalled in a recent interview. “And my response was, why wouldn’t I? Why would you not see this work is about all of us? And there’s that gap between how we perceive things.”

Today, she sees some of the same arguments she encountered in Bellevue carrying over to the debate on I-1000, a measure she supports.

“I think it is a zero-sum way to look at things: that if somebody is gaining something, then somebody else is losing something,” Thai said. “In my opinion, that is a misunderstanding of what 1-1000 is about.”

After several contentious community meetings, the Bellevue School District appointed an advisory committee to develop recommendations for what the district’s new equity policy should look like. District officials said that, to their knowledge, members of Washington Asians for Equality didn’t apply to be a part of that community advisory committee, something Qiu disputes.

The school board, with input from the advisory committee, went on to develop a racial equity policy that talks about ensuring all students and families “feel a deep sense of belonging.” The policy recognizes that students of color and those with disabilities face additional barriers, “and that the experiences of different groups cannot all be addressed in the same ways.”

Michael May, a spokesperson for the Bellevue School District, said the district’s equity policy “is not about dampening the success of any students, but raising all students up.”

The school board formally adopted the new policy in June.

By that time, Qiu and other members of Washington Asians for Equality had shifted their energy toward opposing I-1000.

Members of the group were frequently present at the Capitol throughout the spring to protest against the initiative. Yet others, too, showed up to speak their minds, showcasing the broad range of opinions surrounding affirmative action — including among Asian American groups.

Another group, Asian Pacific Islander Americans for Civic Empowerment (APACE), drafted a letter to Washington lawmakers in February expressing the group’s support for I-1000, while disputing Washington Asians for Equality’s claim that the initiative would hurt Asian Americans.

“This group does not represent the views of most Asian Americans and Pacific Islanders,” the letter read.

Nat Jackson, the citizen sponsor of I-1000, said the initiative is needed because of how badly Washington’s ban on affirmative action has hurt communities of color over the past two decades.

He said the damage has become clearly visible since 1998, when voters passed the measure known as Initiative 200. I-200 forbid the use of preferential treatment based on race, sex or ethnicity in government hiring decisions, contracting and educational programs, effectively putting an end to affirmative-action practices.

According to state data, when I-200 was passed in 1998, 13.31% of expenditures by state agencies and educational institutions went toward certified minority and women-owned businesses. In fiscal year 2018, that percentage had declined to 3.6%.

That steep decline has caused small minority- and women-owned businesses to lose an estimated $3.5 billion in revenue over the past 20 years, according to the Office of Minority and Women’s Business Enterprises.

“It is just morally wrong. It is just destructive to continue as we had been continuing,” Jackson said last week, referencing those lost years of revenue. “I don’t think the citizens of Washington would continue that if they knew about it.”

I-1000 amends I-200 to allow race, ethnicity, age, sex, and veteran status to play a role in hiring and admissions decisions, but states those characteristics cannot be the sole qualifying factor in any decision. In other words, none of those characteristics can be used on their own to justify picking one candidate over someone else who is more qualified, according to a legislative staff analysis of the initiative.

Besides viewing I-1000 as discriminatory, Qiu said he takes issue with how the Legislature passed the measure without a vote of the people. He said he thinks it is important for Washington voters to have a say, particularly since I-1000 alters an earlier ballot measure that won voter approval.

He said that’s why he fought so hard to give voters a chance to weigh in on the policy this fall, through R-88.