'It's a beautiful story': The Seattle Sounders victory will be heard around the world

A handful of locals helped elevate Seattle soccer to the global stage. 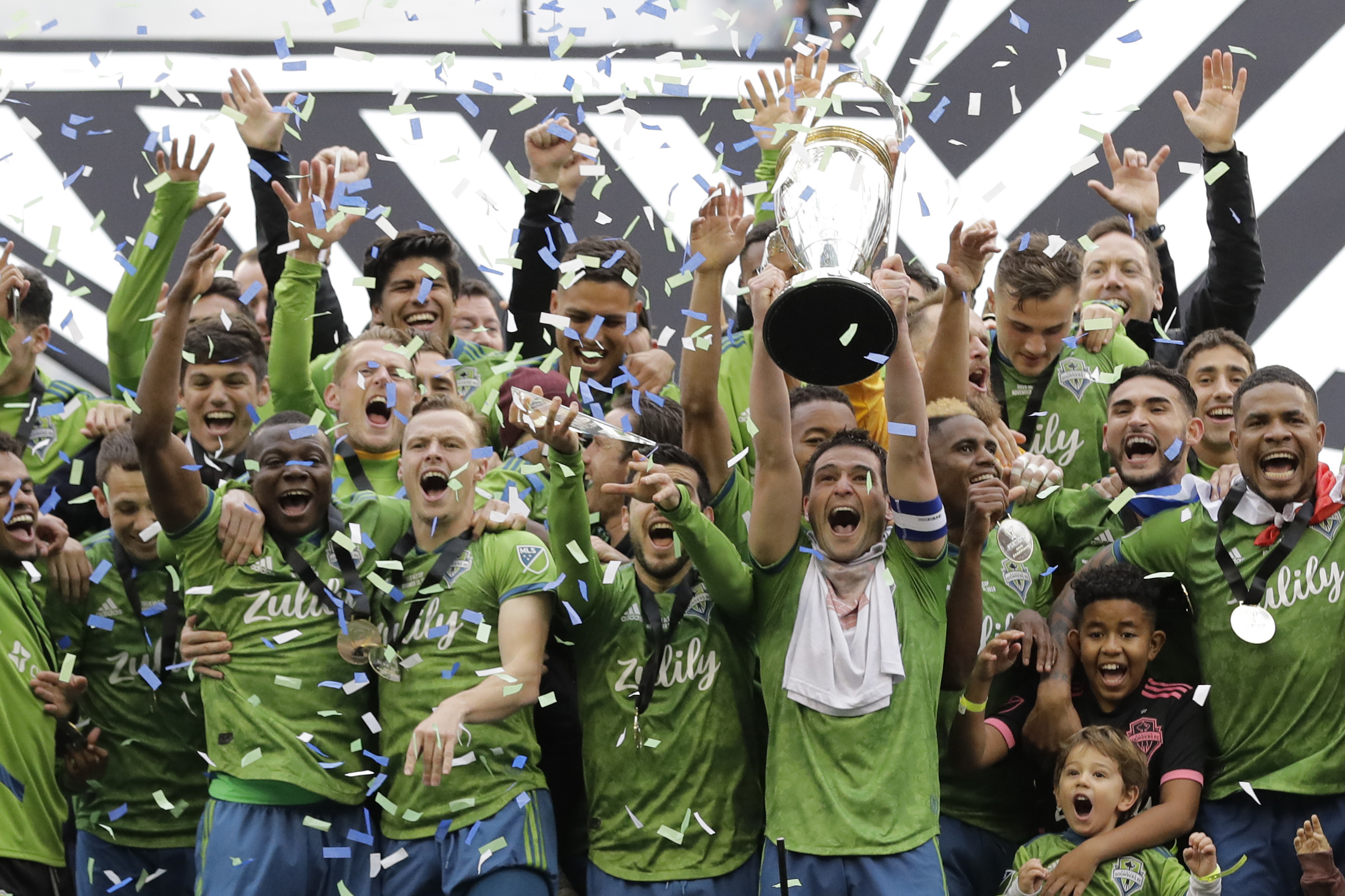 After the Seattle Sounders were thoroughly outplayed in the first half Sunday, yet dodged and ducked to a scoreless draw, general manager Garth Lagerway looked over at his boss. Club owner Adrian Hanauer, a kid from Mercer Island who came to wealth and then to Major League Soccer with a passion to create a team with a global brand in a global sport, was tighter than yoga pants on Santa.

"I saw it in his face," Lagerway said. "You walk into this stadium and see all these people, especially for Adrian and [coach Brian Schmetzer], who are Seattle lifers. ... You blow this in front of everybody you grew up with?"

Fortunately for Hanauer’s health, Schmetzer and 69,247 fans, the largest, loudest, lustiest sports crowd in CenturyLink Field's history, matters turned in the second half. Second-half goals by Kevin Leerdam and Victor Rodriguez, the first a redirection off a defender and the second a laser from a substitute player, gobsmacked Toronto FC.

The release of tension quickly turned into an exultation of success, the 3-1 triumph securing the Sounders not only as 2019 MLS Cup champions, but as a player on the world scene after three Cup appearances in four years and a second title.

Once the fireworks, confetti and trophy walkabouts by players in front of delirious fans finally abated, I caught up with Hanauer, walking alone in the stadium hallway between locker rooms.

I asked him to describe this pinnacle moment for a kid who attended his first game as an 8-year-old and never gave up on a sport that many Americans had derided.

"After the second goal [in the 71st minute], I checked on the time left," Hanauer said, grinning. "I felt peace."

For one of the longest-tenured owners in Seattle pro sports — one who during the last year talked a group of 13 wealthy families that included Russell Wilson and Macklemore into buying out the shares of Hollywood producer Joe Roth — the absence of tension was more profound than joy.

"After the game, he says to me, 'Can you believe we did this?' It was a relief," said Lagerway, whom Hanauer hired four years ago. "You know Adrian. He worries about everything, he anticipates everything, he looks around every corner. He's a guy always thinking about his next move."

The relentless drive has helped produced the winningest team in MLS during Seattle's 11-year tenure, which has included playoffs each season, an ongoing league record. This season, the Sounders lost only twice in their final 12 contests, a run that included four wins in the playoffs: 4-3 over Dallas, 2-0 over Real Salt Lake and 3-1 on the road against Los Angeles FC, then the championship Sunday.

All three MLS Cup appearances were against the Reds, the previous two in Toronto. Seattle now has won two, this one in a venue more spectacular than Toronto's BMO Field, a tidy, 25,000-seat, soccer-specific stadium. The large stage and deeply passionate Seattle fans must have made an impression on the red-clad Toronto fans.

Lagerwey recalled a pregame conversation with a senior MLS executive: "He said Seattle was the most authentic, loudest place they've seen,” he said. “From a third party, that says something."

Sounders technical director Chris Henderson is another Seattle lifer, from Cascade High School in Everett. In the beer- and champagne-soaked locker room, he talked about the power of the moment after decades of helping to grow the game on a community, as well as professional, level.

"There were times during the game when I looked up and was thinking, 'This is my hometown!' " he said. "I got goosebumps looking at a completely full stadium where everyone's having a blast. This was the time for our club to show the city, show the world, who we are."

Everyone understands soccer is not yet on the level with the longer-tenured American pro sports, although exactly zero evidence for that claim was visible Sunday. The idea is to be patient and look beyond the U.S. borders. 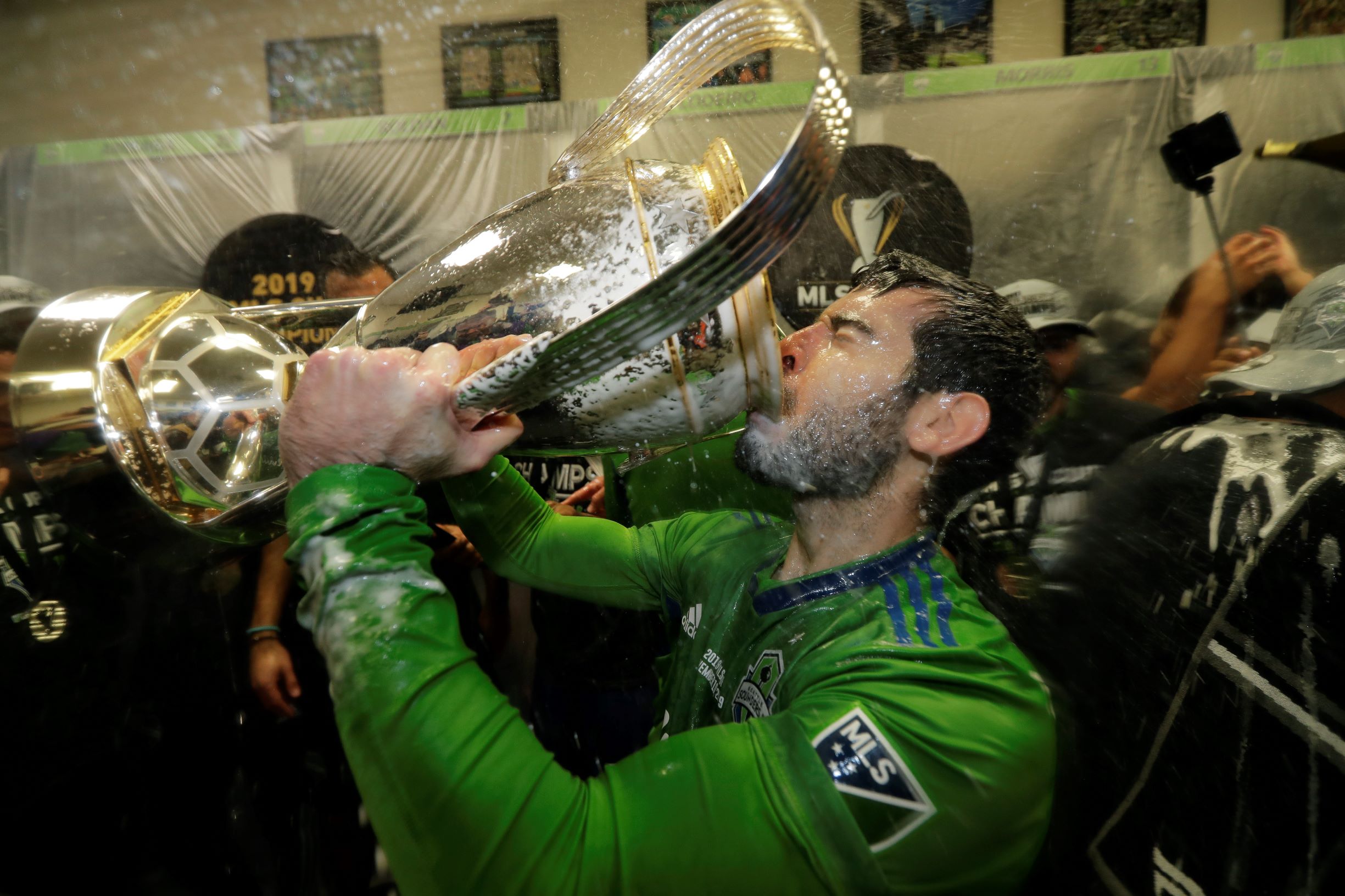 Seattle Sounders' Victor Rodriguez, who scored a goal in the match, drinks from the cup after defeating Toronto FC in the MLS Cup championship soccer match in Seattle, Nov. 10, 2019. (Ted S. Warren/AP)

Seattle Sounders' Victor Rodriguez, who scored a goal in the match, drinks from the cup after defeating Toronto FC in the MLS Cup championship soccer match in Seattle, Nov. 10, 2019. (Ted S. Warren/AP)

"We can be a global club that strives for excellence every single year," Henderson said. "Lots of people take great pride in building this club over the years. Adrian's strength was to be able to connect the Sounders of the '70s, '80s, '90s and today, to who we are as a club. People know we want to win championships.

"The league has moved leaps and bounds from where we were in 2009. I think today was one of those moments where everyone in the soccer world knows the Sounders are one of the top teams ever in this league."

Recruitable European, Latin American and Asian players who pay attention to American soccer know the Seattle Sounders. Because they are winners. They can win a championship game despite possessing the ball just 35 percent of the time.

Watching the game from the pressbox was Alan Hinton, Sounders coach from 1980 to 1982 who's since earned his stripes as a Seattle lifer, staying close to the club in his retirement.

"It's a beautiful story," he said. "The big deal is [the win] happened here, more beautiful because Brian Schmetzer is a local boy. How many local boys coach their team to the top in professional soccer? Very rare.

Hanauer, now at peace, can relax, knowing he hasn't let his friends down. Then?

"Back to work tomorrow," he said.