A plan in the state Legislature would require private insurers to cover the devices, which must be replaced every few years. 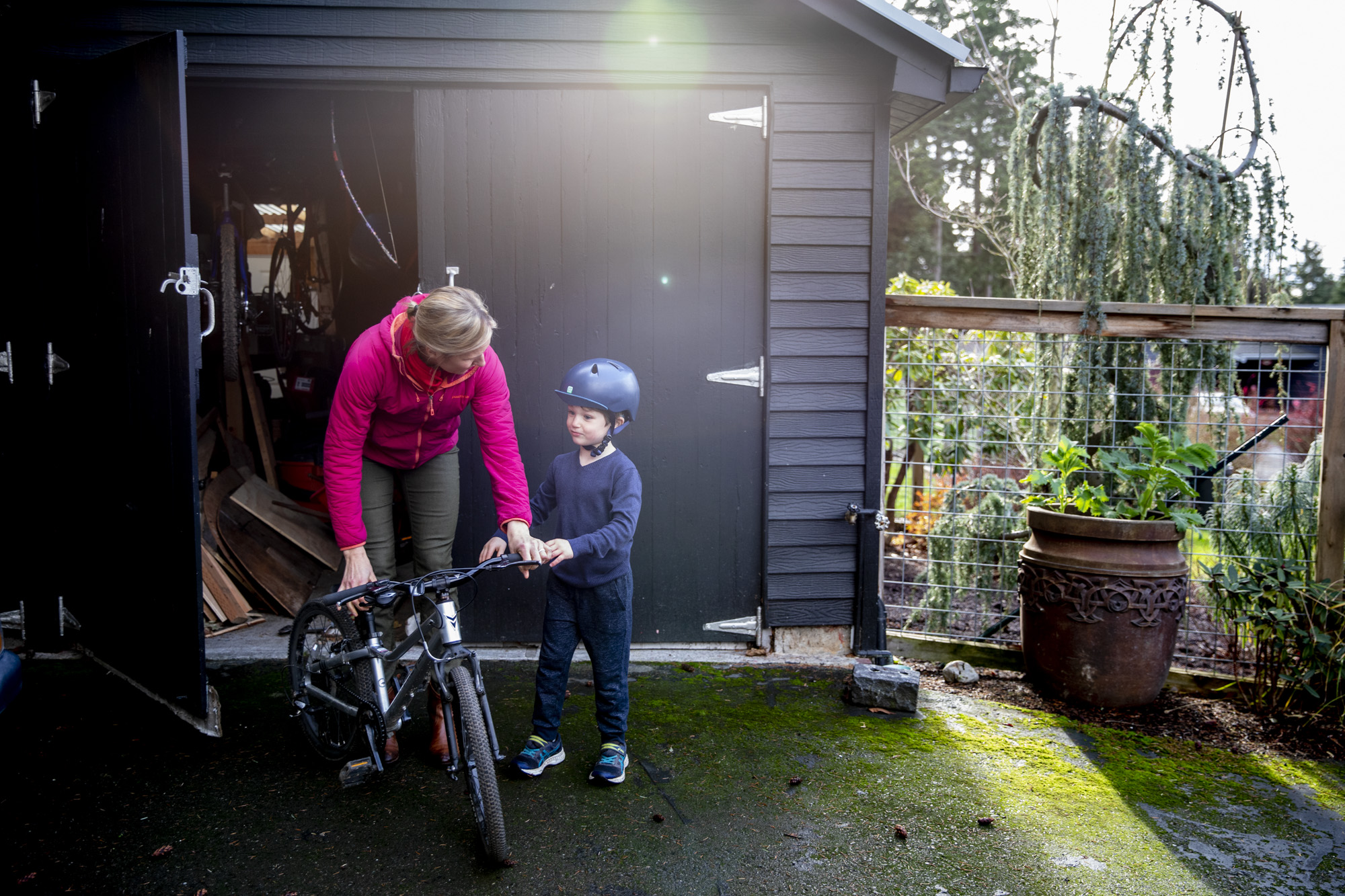 Hugo Esterhay was hitting just about all the normal milestones for a 3-year-old. Except when he spoke, he struggled to pronounce certain sounds — like the “th” in “the” and the sounds made by the letters “s” and “l.”

Hugo's parents took him to a speech therapist looking for help.

But the real issue wasn’t with Hugo's speech, the family soon found out. It was his hearing.

As it turned out, the hairs in Hugo’s inner ear didn’t move how they were supposed to, causing him to miss out on nearly 50% of sounds most people can hear.

“It was just shocking. I was like, how did I not know this?” said Bujnevicie, who lives in Normandy Park. After Hugo was diagnosed, she realized she had been unconsciously crouching down to speak to him so he could hear her — something she didn’t do with her older son.

Soon, the family was in for another shock: Bujnevicie’s insurance plan, for which she said she pays about $1,200 a month, wouldn’t cover Hugo’s hearing aids.

Hearing aids for both of Hugo’s ears cost $4,000. Families also must invest repeatedly in custom silicone molds, which ensure the devices continue to fit snugly as children grow.

On top of that, kids typically need new hearing aids every three to five years, Bujnevicie soon discovered. The total cost would be tens of thousands of dollars by the time Hugo reached adulthood.

In Bujnevicie’s case, the family of four was able to manage: She works as a physician assistant, and her husband, Hugo’s father, is a doctor.

Yet she worried about others who might not be able to afford such high out-of-pocket costs.

While Medicaid covers children’s hearing aids, private insurers in Washington state are not required to do so. A majority of Washingtonians – about 56% — have private insurance.

Bujnevicie said she didn’t understand why insurers are required to cover eyeglasses and eye appointments for children with limited vision, but not hearing aids for kids who are deaf or hard of hearing.

She soon found herself on a mission to change Washington state law. Across the country, 24 other states require private insurance companies to cover hearing instruments for children, according to the group Let America Hear.

Bujnevicie wondered: Why not Washington?

Bujnevicie soon found an ally at the state Capitol. State Rep. Christine Kilduff, D-University Place, agreed to sponsor legislation that would require private insurers to cover hearing aids for people 18 and under.

While the initial version of Kilduff’s legislation stalled in the spring, she is about to try again. She said she plans to file a new version of the bill later this month, in advance of the 60-day legislative session, which begins Jan. 13.

The basic concept of the bill will remain the same: Insurers would be required to provide up to $5,000 in coverage for hearing instruments every three years. Coverage would need to extend to patients 18 and under.

“We have a gap right now in our state,” Kilduff said. “I think the bottom line is that undetected, undiagnosed hearing loss for kids can have a devastating impact on their lives.”

Doctors who work with people who are deaf or hard of hearing affirm that is the case.

Dr. Kathy Sie, the director of the Childhood Communication Center and chief of otolaryngology at Seattle Children's Hospital, said children require exposure to language for their social and cognitive development.

Sign language can provide those benefits, Sie said. But because most deaf or hard-of-hearing children are born to parents who have standard hearing, those children may not get adequate exposure to language if they don’t have hearing aids, she said.

“I think this legislation is very important, because kids are developing, and often they don’t have any other way to communicate,” Sie said. “Early amplification and consistent amplification really contributes to their speech, language and cognitive development, and their academic performance.”

In a written statement, Regence BlueShield, Bujnevicie’s insurer, said it covers bone-anchored hearing aids and cochlear implants, which are designed for people who are severely deaf.

Some plans also cover other types of hearing aids, the company said, though Bujnevicie's plan was not one of them.

The company didn't take a position on Kilduff's bill, but said it is "reviewing our coverage policies to ensure they provide the essential care our members need."

Even some families that have insurance coverage for hearing aids say the coverage is often insufficient.

Seattle resident Laura Gramer is deaf, as are her husband and two children.

Gramer said that, for her youngest son's hearing aid, she recently had to pay nearly $1,800 out of pocket, plus more for custom ear molds.

While her current plan, provided by Premera, covers up to $2,000 per person every three years, “this is not enough,” Gramer wrote in an email.

Lianne DeVerter, who lives in Snohomish, said she has run into a similar problem trying to get a replacement hearing aid for her 7-year-old, who has severe-to-profound hearing loss. Her family’s current insurance plan will cover a hearing aid for only one of her son’s ears, she said.

She and her husband are searching for jobs that provide better benefits.

After all, “he has two ears,” DeVerter said of her son.

Yet, as with so many things in the Legislature, the issue may come down to money. Under the federal Affordable Care Act, the state is required to defray the costs of new insurance mandates imposed by state lawmakers. That’s because those mandates will affect subsidized plans that are sold through the state’s insurance marketplace, the Washington Health Benefit Exchange. 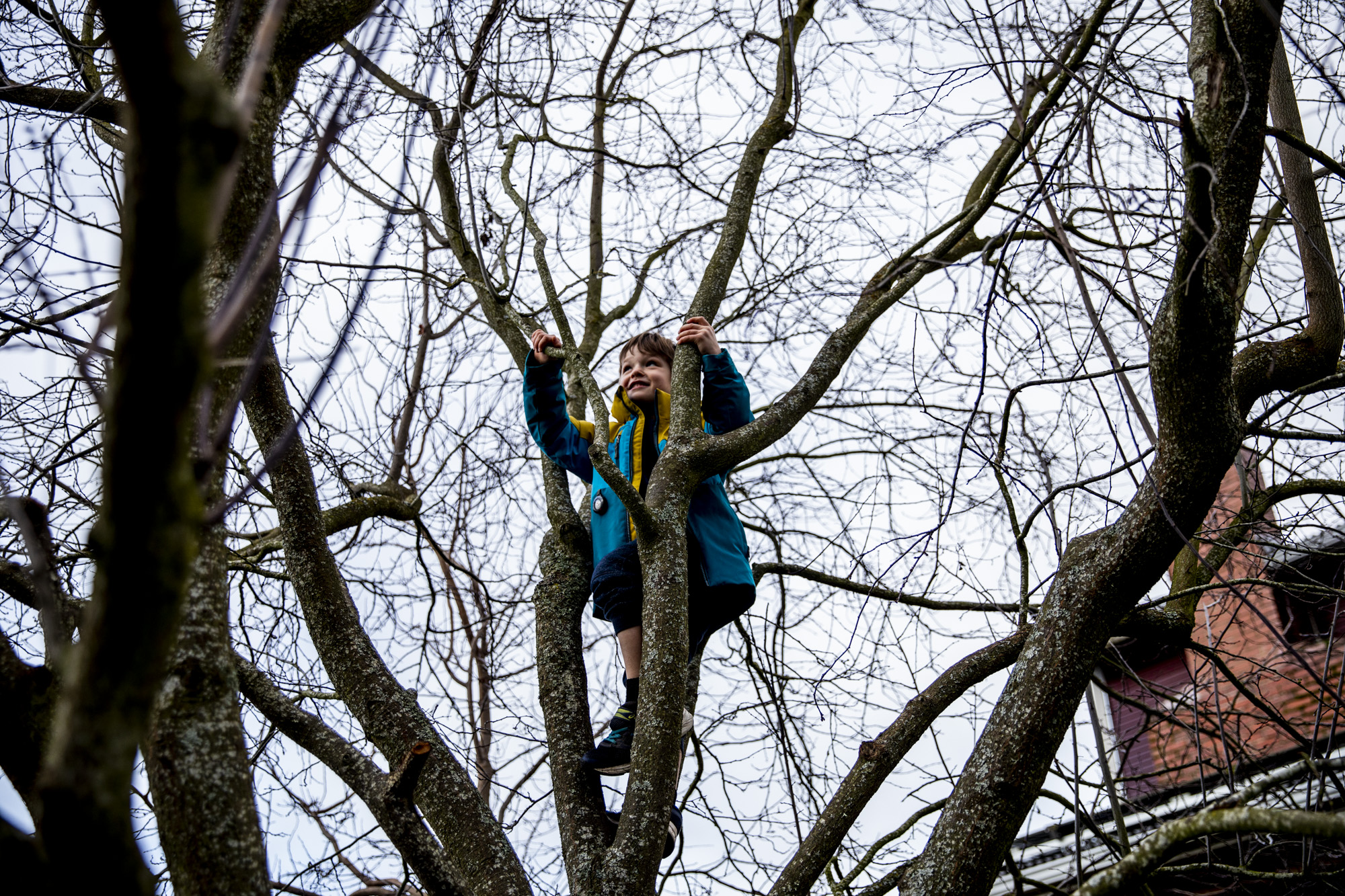 Hugo Esterhay climbs a tree in the backyard of his Normandy Park home on Dec. 13. (Dorothy Edwards/Crosscut)

Hugo Esterhay climbs a tree in the backyard of his Normandy Park home on Dec. 13. (Dorothy Edwards/Crosscut)

A fiscal analysis has yet to be completed for Kilduff’s proposal, but it would undoubtedly cause a hit to the state budget.

State Rep. Eileen Cody, a Seattle Democrat who chairs the House Health Care and Wellness Committee, said that could pose a challenge, at least in the short term. In the upcoming 60-day session, the Legislature isn’t writing a new two-year budget, but merely making adjustments to the $52.1 billion spending plan lawmakers adopted in April.

State Rep. Joe Schmick, the ranking Republican on the committee, said he also worries that adding another mandate could increase the cost of insurance premiums.

“No one is going to argue it’s not a worthy cause,” Schmick said Thursday. “It’s just, do we keep adding and keep pushing the cost of private insurance up?”

Still, the idea of expanding hearing-aid coverage for children has piqued the interest of some of Kilduff’s colleagues. State Rep. Paul Harris, a Republican from Vancouver, said he is interested in cosponsoring the bill in the upcoming session, but is still waiting to see the legislation's final language before deciding for sure.

In general, “I just want to make sure individuals have access to this,” Harris said last week.

State Rep. Laurie Jinkins, a Tacoma Democrat recently chosen by her colleagues to be the next speaker of the House, has also signaled support for the idea in the past. Jinkins co-sponsored the initial version of the bill, before she was elected in July to become the House’s top leader.

In a text message, Jinkins said she still likes the concept, “but mandates are a hard thing.”

For Bujnevicie, the changes Hugo has undergone since getting his hearing aid a year ago are profound. At the Montessori school Hugo attends in Burien, the now 5-year-old is successfully learning to read and write. He can engage in class in ways he couldn’t before, she said.

Hugo no longer struggles to pronounce the words that once tripped him up, his mom said. Last month, he came to his mom with an announcement.

Bujnevicie thinks the hearing aid has made all the difference.

“He’s going to have to work harder, but he’ll be OK — because he has been given what he needs,” she said.

In the coming months, she and other parents will urge lawmakers to make that true for all families.

“We can afford this,” she said of her own family. “But it’s the principle, and it’s about the other people who don’t qualify for Medicaid.

“They are falling through the cracks because they can’t afford it.”