Is bowing to business decaying our democracy?

What an exchange during the House impeachment inquiry between Gordon Sondland and Rep. Denny Heck says about our values. 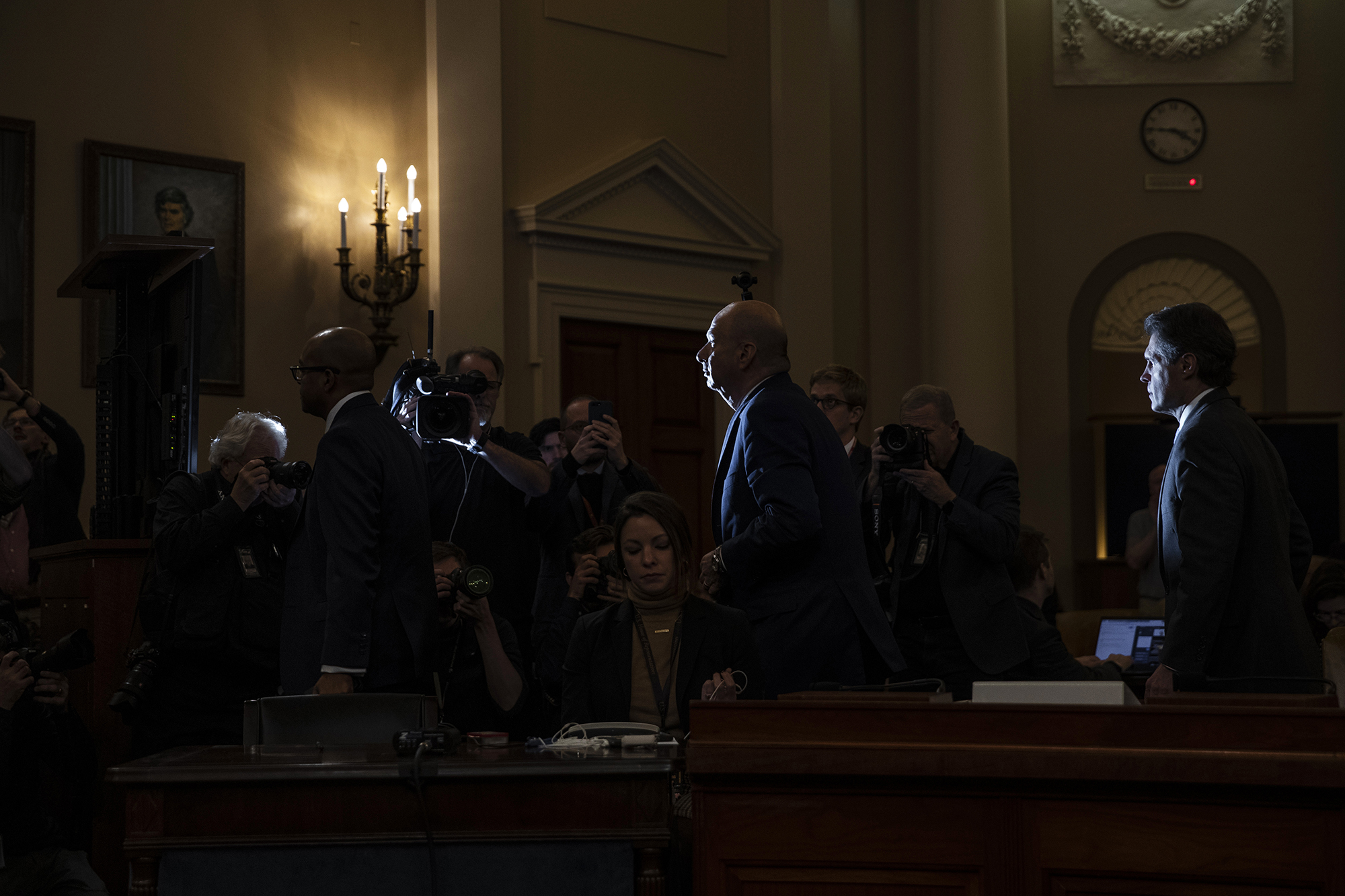 U.S. Ambassador to the European Union Gordon Sondland, center, finishes a day of testimony before the House Intelligence Committee on Capitol Hill in Washington, Nov. 20, 2019, during a public impeachment hearing of President Donald Trump's efforts to tie U.S. aid for Ukraine to investigations of his political opponents. (Anna Moneymaker/AP)

In November, at the very end of Gordon Sondland’s testimony before the House Intelligence Committee, U.S. Rep. Denny Heck of Washington’s 10th District asked why the U.S. ambassador to the European Union came forward, despite advice from his superiors and Republican colleagues. Sondland replied with words about duty and commitment to country. Heck, a Democrat from Olympia, then responded with a moving and thoughtful counteranalysis generously suggesting Sondland made the choice based on his history as the son of Holocaust survivors, his sense of loyalty to a country that gave his family an opportunity to thrive and his desire to affirm the principles his parents taught. It spoke volumes about Heck’s sense of decorum and compassionate intent. Sondland gave a slight nod in response.

I wanted to believe Heck’s words, but something kept nagging at me. If those values were what motivated Sondland, how did he get into this mess in the first place? How could Donald Trump’s former national security adviser John Bolton, a man with controversies of his own, see the situation clearly enough to tell Fiona Hill, then a national security official, he didn’t want to get entangled in “whatever drug deal Sondland and [Trump’s personal lawyer Rudy] Giuliani are cooking up,” while Sondland played blissfully along with the president’s plan?

If we squeeze Sondland’s actions to distill his values, we see a man following orders without caring about their impacts or questioning their legality or propriety. Isn’t that the very behavior that created the circumstances his parents fled from in Poland? Bolton clearly saw the “art of the deal” going down, as did Lt. Col. Alexander Vindman, director of  European affairs with the U.S. National Security Council. Vindman was so alarmed by what he heard on the July 25 phone call between Ukraine President Volodymyr Zelinskiy and Trump that he reported his concerns to NSC’s lead legal counsel. Was Sondland so incompetent that he didn’t recognize the illegality of what he was being asked to do? He’s a very successful businessman, so he’s not stupid. What motivation was so strong it overrode any internal moral checkpoints he may have had?

After watching Sondland’s testimony, I thought about the thousands of children separated from their parents and guardians at our southern border, while Sondland represented our country to the European Union, a collection of nations that suffered the separation of children from their families first by force, by the Nazis, and then by choice, in the attempt to protect them from the Nazis. How could this son of refugees from that war serve a president whose policies invoked that horrible history and present himself in the capitals of countries that had suffered such deep intergenerational trauma? What muted his conscience so profoundly that he could ignore all those things and continue to simply follow orders to “just get it done,” the justification he kept repeating? What, exactly, did he think he was getting done?

Over time, I realized Heck’s response was problematic on another level. Why did he think it necessary to give Sondland an alternative, perhaps more heroic, way out? Like the serial killer’s proverbial mother who simply replies, “He’s really a good boy at heart,” Heck seemed willing to cover the dung heap of Sondland’s actual actions with a polished veneer of good intent and call it a day. Why? Where was Heck’s moral compass and, by extension, where is the moral compass of this nation? What has seduced us into accepting the horrors of our day as “business as usual”? Maybe the answer rests within that last phrase itself: business as usual.

The night before our November elections, I attended a Town Hall talk by Anand Giridharadas, author of Winners Take All: The Elite Charade of Changing the World. Jeff Bezos had recently contributed $1.5 million to support business-friendly candidates in Seattle’s city council election. The year before, he rallied business owners to threaten the city council until they overturned a new tax that would have assessed a $275-per-employee “head tax” on Seattle’s largest private employers in order to pay for new public housing and homeless services caused by these businesses’ rapid expansion. When asked about Bezos’ intervention in the election, Giridharadas posed two questions that encapsulated the thoughts I’ve been wrestling with. I paraphrase: What does it say of someone if they have more money than anyone has ever had on the planet, freeing them to do and be whatever they choose, and they choose to use their power and resources to silence the voices of the most vulnerable in our society? What does it say of our society that we allow them to believe such behavior is acceptable? In other words: Where is their moral compass, and where is ours?

In his book, Giridharadas explores how business ethics have changed over the past 40 years and crept into the nonprofit realm under the illusion that businesspeople best know how to implement social change. He very effectively challenges the notion that business ethics should drive society by comparing outcomes with efforts, and he shows how the “do well and do good” mantra of this past decade is code for “make money by fixing the problems you created,” while disassociating the self-titled philanthropists from responsibility for creating those same problems. He uses interviews with specific individuals to illustrate how they talk themselves into believing their own little white lies while ignoring the actual impacts of their actions.

What he brushes over lightly is how the same self-seduction has been applied to government under the guise of public-private partnership. Since the Reagan era we’ve been inundated by the business-knows-best mythology, yet in that same time span the majority of Americans have worked more and benefited less. Pension plans created as retirement savings for loyal employees were converted into 401(k) plans feeding the voracious appetite of the stock market while remaining subject to its sometimes-volatile whims. Hospitals left their service as nonprofit institutions and became for-profit behemoths tied to insurance company profits. Charter schools were touted as the answer for under-resourced, failing schools.

The uniqueness of our government is supposed to be its aspiration to protect the people from tyranny, be it domestic or foreign. Government workers are supposed to be those who watch out for all of us. They are supposed to be those who put our collective interests above any and all individual interests, their own or others. The 1999 protests against the World Trade Organization (WTO) and the 2008 Occupy movement were benchmarks along a continuum to refocus our government on its role: “this is what democracy looks like.” Until he retires, as long as Denny Heck holds office as an elected representative to the U.S. Congress, it’s his job to hold accountable Gordon Sondland and all those Sondland colluded with, not to assuage their guilt.

Thousands of public servants like Vindman and Hill put their lives on the line to maintain structures of accountability, but from the Reagan administration to this day they have been thwarted by the “greed is good” philosophy of business. Instead of rates of education, health of children and the elderly, condition of our infrastructure, or our cities’ abilities to recover from a natural disaster, the measure of our nation’s strength has become the success of Wall Street gamblers.

This same self-seduction allowed presidential acting Chief of Staff Mick Mulvaney to say, “Did [the president] also mention to me in passing the corruption related to the DNC server? Absolutely — no question about that. That’s it, and that’s why we held up the money.” (He later tried to clean up his comments.) Quid pro quo is a business tactic: scratch my back, I’ll scratch yours; win-win. It is, however, blatantly illegal to use our governmental resources to benefit any individual personally, economically or politically. Mulvaney’s moral compass was nowhere to be found.

Perhaps Sondland, like many throughout the administration, justified bringing that same business philosophy to his government job. Still, I wonder what incentive could possibly desensitize him to the deep harm he was doing to our nation. Then I’m led to ask the second half of Giridharadas’ question: What incentivizes us to allow such behavior to continue? What self-seductions keep us from refusing to participate in the systems harming our society? Why have we not risen up and demanded our federal government use a Public Works Administration-type program to fund and implement an entirely new water system for Flint? Why hasn’t every parent in this country refused to do another day’s work until our government reunites children torn from their families at the border or in Indigenous communities? Who are we as a city, a county, a state, a region, a nation? If you squeeze our actions, what values will be distilled from us?

I’m grateful for the election of a progressive city council in our town, despite Amazon’s unprecedented attempt to influence the outcome. Glad to have champions who have not been seduced into abdicating our collective voice to those whose primary goal is to enrich themselves. Thankful they use the sense of the common folks to declare winter is not a time to displace the poor. We will need to hold them to their promises and weigh their actions against their words. Otherwise, we are no different from Denny Heck, well-meaning collaborators in the polite destruction of our democratic form of government.