The decade progressives started fighting for themselves

Seattleites of the future will remember the 2010s for the first stirrings of a new movement. 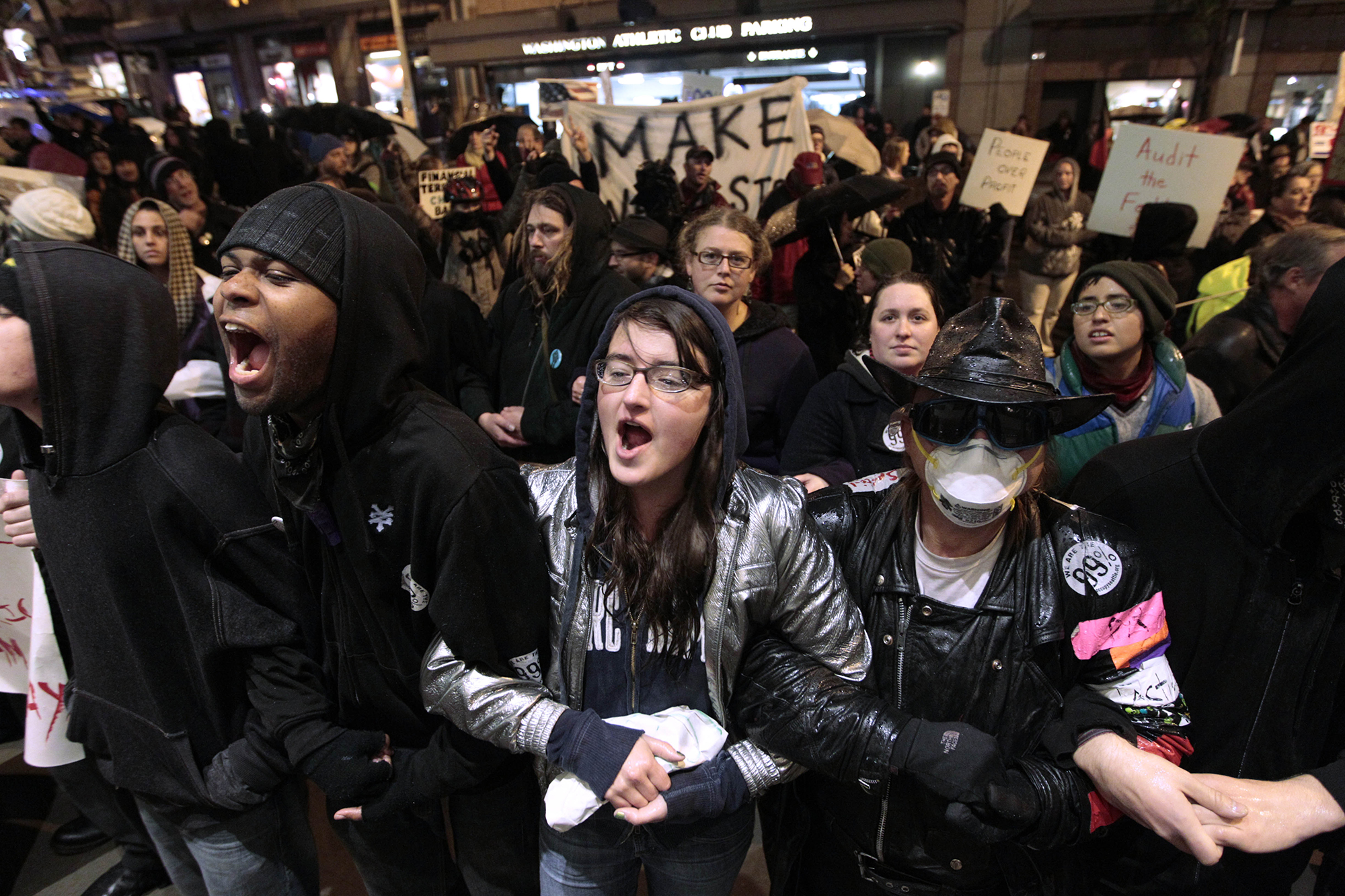 With only a few days left in 2019, we’re nearing not just the end of a year but the end of a decade. Sure, some pedantic person will insist that the next decade doesn’t actually begin until 2021, because there never was a year zero; but humans like round numbers, so now is the time that we reflect. I find myself thinking about how Seattleites of the future will look back at the 2010s. What will be the significance of these years in the eyes of future historians?

Setting predictions down in black and white carries certain risks, mainly that of being laughed at by people who haven’t yet been born; but since it’s highly unlikely anyone will be reading this column 100 or 50 or even 10 years from now, I’m going to make a bold one. I think the 2010s will be remembered as the decade we began fighting for ourselves. But let’s back up, because the novelty of this notion is clearest against the backdrop of what came before.

This fall Seattle marked the 20th anniversary of the 1999 World Trade Organization protests, which launched the anti-globalization movement into prime time. I wasn’t at the Battle of Seattle. I was 17, a senior in high school on the other side of the country. But I heard all about it, and the following spring, in the dawn of the new millennium, I boarded a bus filled mostly with college students and rode down to join the next big convergence, the “A16” protests of the International Monetary Fund and World Bank meetings in Washington, D.C.

For the young people whose energy and idealism fueled these demonstrations, the point was not primarily to air our own grievances. We might not be happy, exactly — the 1990s constituted almost the whole of our reality, so we suffered from the ennui of living at the end of history and finding out that it kind of sucked — but we were mostly OK. We were there, instead, for the developing countries we’d heard were being exploited and squeezed by debt. We were there for the small farmers who couldn’t reuse the seeds from their own crops because of Monsanto’s patents. We were there for the disappearing rainforest. We marched because we’d learned that these undemocratic, supranational entities — the WTO, the IMF and the World Bank — were imposing neoliberal policies with devastating consequences for people less privileged than ourselves, all over the world.

The anti-globalization movement was brief; it never regained the vitality on display in pre-millennium Seattle, and lingered only a couple of years before the 9/11 attacks on the World Trade Center abruptly altered the public mood. Patriotism and militarism were in, carnivalesque puppets were out. It would be another 10 years before mass protest next captured the national news cycle in a sustained way, and roiled Seattle’s politics.

That moment came with the Occupy movement in late 2011, early in our current decade. The people who set up camp in Westlake Park shared many values and beliefs with the WTO protesters — some of them were the same people — but there was a key difference. This time we were struggling. It was our homes in foreclosure. It was our student loans we could never pay back. We were the ones working dead-end, low-wage jobs. We were the 99%, and we traced our troubles to the 1%, the wealthy financial and corporate class who wielded massive and unaccountable power over our economy, our political system and our daily lives.

A lot had happened in that first decade of the new millennium to bring us to this point. The dot-com bubble burst. As war raged in Afghanistan and Iraq, seismic changes took place in Americans’ economic reality. Globalization, far from being stymied by the alliance of “Teamsters and Turtles” at the WTO protests, went into overdrive. It was a time of mergers and acquisitions, outsourcing and offshoring, and automation; 5 million manufacturing jobs evaporated in those 10 years. The financial meltdown hit in 2008, and in the recession that followed, millions of families lost their homes. Trillions of dollars in middle class wealth was wiped out, with Black households especially hard-hit. College graduates couldn’t find jobs. Life for the non-wealthy American felt increasingly precarious.

“Occupy” might not have been any more effective than the anti-globalization movement in terms of its tangible achievements, but it marked a real shift in public consciousness. And in the years that followed, no city proved more effective than Seattle in translating that new consciousness into political and policy wins. We were the first major city to establish a $15 minimum wage. We elected a socialist to the city council, and re-elected her, and re-elected her again. We challenged long-standing legal precedent to tax the rich, and made a valiant and briefly successful effort to tax big business. And, in the waning months of the decade, we roundly defeated a naked bid for political power by Seattle’s homegrown global mega-corporation, Amazon.

Those are just a few highlights of a decade that has seen the undeniable stirrings of a new progressive-left movement in Seattle, and in cities around the country. This movement, though far from unified, shows no signs of going away. Neither is the need to fight for ourselves going away; inequality has continued to grow to levels not seen since the 1920s, before the Great Depression. Seattle will remain in the spotlight — if for no other reason than Amazon, which is fast becoming a symbol for global capital and its ever more intrusive power over every facet of our lives.

To fulfill my prediction, however, it won’t be enough to continue fighting for ourselves. For the movement that began stirring in the 2010s to blossom in the 2020s, we’ll also need to get better at fighting alongside and for each other. I don’t just mean greater cooperation among progressive forces here in Seattle and our region; we must also forge stronger alliances with our counterparts around the country and even around the world. Otherwise, mega-corporations like Amazon will continue to pit cities and regions against each other in a race to the bottom. When it comes to Amazon, that alliance-building is already starting to happen. Jeff Bezos might not be quaking in his boots quite yet — but maybe that’s a good resolution for the new decade.