The Rev. Bryan Pham is pushing the company to improve conditions at the immigration detention center in Tacoma and hold true to its human rights policy. 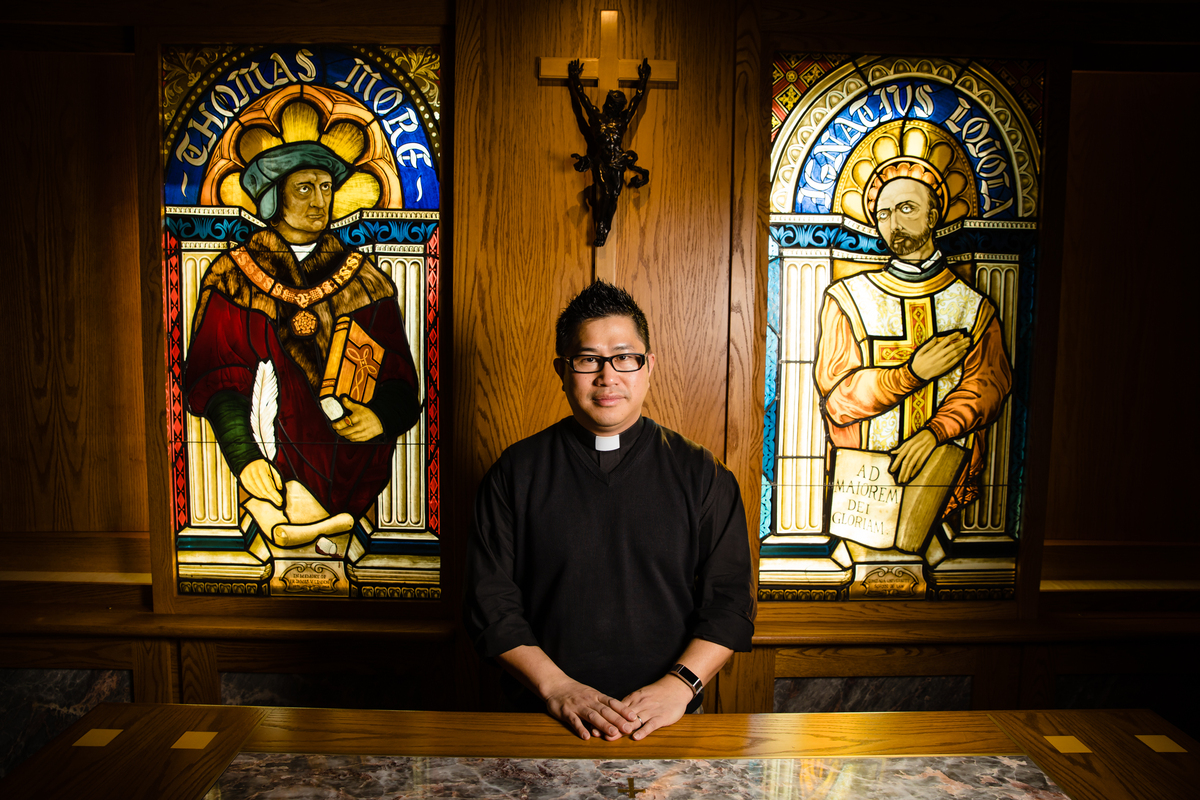 Rev. Bryan Pham is a professor at Gonzaga University School of Law and serves as a shareholder representative of the Jesuits West Province, which has taken part in shareholder activism. Jesuits West purchased shares of the GEO Group, one of the largest for-profit prison and detention center operators in the U.S., in order to influence the corporation's policy. (Jerome Pollos for Crosscut)

Over approximately the past five years, objections to what some see as abusive conditions at immigration detention centers have often come in the form of well-publicized hunger strikes or protests outside the facilities themselves.

What the public has largely missed, however, are the men and women, many of them religious, working behind the scenes to push private prison companies to improve conditions by investing in the very system to which they object.

The Rev. Bryan Pham, SJ, of the USA West Province of the Society of Jesus is one such person.

The Jesuit priest, who also works as an immigration lawyer, is an active shareholder with various companies he believes have the power and responsibility to make the world a better place. One corporation in his portfolio is GEO Group, one of the largest private prison companies in the country. It operates the immigration detention center in Tacoma for U.S. Immigration and Customs Enforcement (ICE).

“It is an uncomfortable relationship, but someone has to do it,” Pham said from the campus of Gonzaga University in Spokane, where he is an adjunct professor in religious studies.

“We need to engage with people whether they’re at the very top of the food chain or at the very bottom,” he continued. “All are people of God. All people intend to do good.”

Pham said the USA West Province of the Society of Jesus first bought stock in GEO Group in 2012, investing the minimum amount needed to have some influence — about 153 shares. About a year later, GEO Group adopted its first human rights policy.

“The GEO Group expects that we treat each other with mutual respect,” the policy states. “We are serious about our responsibilities to inmates and detainees.” The company also expresses respect for its employees, the community and pledges to evaluate the impact of its policy while encouraging the reporting of any perceived violations.

But Pham and other shareholders have been dissatisfied with what they see as the company’s failure to act on such a policy.

“The concern has always been: Is it just a policy on the shelf or is it really changing the culture?” said Pat Zerega, who also owns shares in GEO Group. Zerega is senior director of shareholder advocacy at Mercy Investment Services, a ministry of the Sisters of Mercy of the Americas.

“We’d like to see it get better because we know there are a lot of ... brothers and sisters in these facilities who we don’t want to see harmed,” she said.

So earlier this year, Pham and other shareholders presented a proposal, which passed with 88% shareholder support, that “called for details regarding how the implementation of GEO’s human rights policy demonstrates respect for inmates and detainees in light of serious allegations of human rights abuses.”

“What we’re talking about here is really quality of life. Quality of life for the security guards, for the people who work in these detention centers, as well as for the life of the detainees themselves.  What we’re asking for is good moral business practices. We’re not asking them all to become Catholic,” Pham said.

He and other shareholders pointed to what they view as serious lapses at GEO Group facilities that have been documented in the past few years. The Department of Homeland Security’s Office of Inspector General in September 2018 reported “serious issues relating to safety, detainee rights, and medical care” at, for example, an immigration detention center in Adelanto, California, owned and operated by GEO.

Inspectors found nooses made from twisted bed sheets in 15 of 20 cells, despite a 2017 suicide and seven recent attempts at the facility. In addition, officials found that all 14 detainees in administrative segregation had been placed inappropriately.

In addition, a lawsuit filed against the company by Washington state Attorney General Bob Ferguson for paying detainees less than the minimum wage continues to drag on.

As a result, local activists have launched an effort focused on pressuring the Tacoma City Council to declare the Northwest ICE Processing Center a public nuisance and revoke the business license of GEO Group.

Additionally, two Washington lawmakers —  U.S. Sen. Maria Cantwell and U.S. Rep. Adam Smith, both Democrats — have called for a review of the use of solitary confinement at the Tacoma detention center. Their letter also asks that the investigation into the death of Amar be completed.

In their proposal, the shareholders asked GEO Group to ensure that “employees are aware of, and know how to apply, the company’s commitment to inmate/detainee human rights.” They also asked about what, if any, metrics are used to assess human rights performance and how the company remedies any shortcomings.

“If we as a church group, we as Jesuits and the other co-filers, if we did not engage actively like this, it doesn’t justify us owning shares with these companies,” Pham said.

“Even if we make one penny, and we don’t engage actively, then that one penny is blood money, money off of people living in those facilities, which is not moral,” he said.

The report GEO Group produced as a result of Pham’s proposal — and which came after the U.S. Securities and Exchange Commission ruled in favor of the shareholders over the company’s objections — itself boasts of the management of “approximately 96,000 beds at 133 secure facilities, processing centers and community reentry centers, with a growing workforce of approximately 23,000 professionals.” The company notes that new employees are required to undergo a minimum of 120 hours of training and 40 hours of recurring training each consecutive year.

Despite the inclusion of various statistics in the 78-page report, Pham said it doesn’t answer the questions they continue to have about the standards at GEO Group facilities.

“We were very disappointed in the report,” Pham explained. “In our view, the report demonstrates significant gaps that raise more questions than they answer. Importantly, GEO’s policies are not aligned with the UN Guiding Principles on Business and Human Rights, considered the current best practice standard for human rights due diligence.”

GEO Group did not return Crosscut's request for comment.

Pham said that unlike the “abolish ICE” movement, he doesn’t object to private prisons in and of themselves.

Pham said he expects GEO Group to meet him and other shareholders at the table so that they can talk about how to improve conditions at immigration facilities.

“We’re Catholic so we’re hopeful. We’re hoping they will come back to the table,” Pham said while noting that GEO Group has refused to communicate with them now for approximately a year.

The last resort, Pham said, would be to divest from the company.

“I have a vested interest in GEO ... because my clients are in these facilities. I can’t just walk away,” Pham said.