In Seattle's WTO protests, the seeds of today's anti-globalist nationalism

The massive global action against the World Trade Organization was framed as a protest from the left. But the far right has gone out ahead. 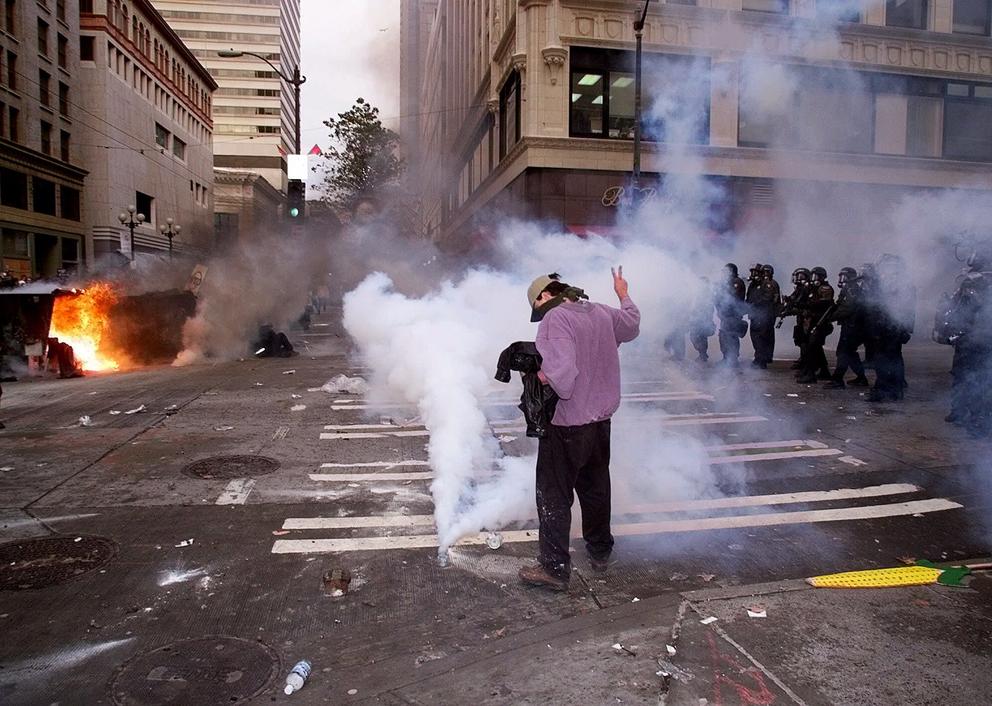 A World Trade Organization demonstrator gestures a peace sign while standing over a gas bomb that was thrown by Seattle police during protests in downtown Seattle, Nov. 30, 1999. (Beth A. Keiser/AP)

On Nov. 30, 1999, Seattle was overtaken by a global protest on the occasion of a meeting of the World Trade Organization (WTO) in the city. The headline-grabbing event was the largest, most disruptive protest since the 1919 Seattle General Strike.

It was the ultimate CNN news event: burning dumpsters, armor-clad police firing tear gas and rubber pellets into a mostly peaceful crowd, windows being smashed as news boxes on the streets were used as battering rams as well as barricades.

Lost in the smoke and gas was this fact: The event was by and large peaceful and celebratory — a kind of Woodstock with music and costumes and friendly alliances. Most noted were animal rights demonstrators who, in a whimsical, theatrical mood, dressed as sea turtles. There were pranks, puppets and a sense of joy at seeing so many fellow protesters from across the world and the political spectrum. The Teamsters union was out in force. Turtles and Teamsters, it seemed, could be a new national alliance to push back against the negative consequences of free trade and the sprawl of corporate influence around the world — labor and greens fighting for working people, jobs, equity and the planet.

The WTO protests have been framed largely as a protest from the left. But there were other threads running through them that have turned out to be even more important in the long run. Gary Bauer, a Republican far-right Christian candidate for president, thought the protesters were right about the WTO being an unaccountable bureaucracy. Pat Buchanan, the ultraconservative politician and commentator who ran for president in 2000 as the standard-bearer for the Reform Party, founded by Ross Perot, came to town. He praised the protests and called the WTO an “embryonic monster.” Another Reform Party presidential hopeful in 2000 was Donald Trump, who called Buchanan “Attila the Hun” for his far-right politics, yet Buchanan beat him out for the Reform Party’s nomination.

I was editor of the Seattle Weekly at the time, and our editorial board interviewed a man who represented the Socialist Workers Party. I asked if his party intended to be part of the upcoming demonstrations. No, he said. He believed the anti-globalist movement to be an incipient fascist movement. “We believe in globalism, but it is international socialism,” he said, and he went on to critique the nationalism and tribalism associated with WTO critics.

Twenty years on, and Donald Trump is now president, not representing the Reform Party but the Republican Party, which has been “Attila the Hun-infied.” He has embraced the anti-free trade stance and suspicion of international agreements and organizations long promoted by the far right. U.S. nationalism defines his administration’s trade, immigration and foreign policies. Trade wars have resulted from tariffs imposed on imports (the antithesis of free trade) and by canceling or rewriting trade deals under the “America First” banner — a slogan used by domestic isolationists and Nazi sympathizers to argue against U.S. involvement in World War II against Hitler.

The supporters of President Trump’s agenda include Pat Buchanan, some angry rural voters and many folks whose industries have been negatively impacted by trade and economic trends. Those on the left who are free trade skeptics, but who are also concerned about global corporations, climate change, restrictive immigration policies and environmental issues, are largely marginalized or tagged as the enemy in a nasty political environment sure to get nastier as we get into 2020.

It is the conservatives of the anti-WTO wing who currently have the influence, not the turtles or the Teamsters. What was a broad and loud voice against globalization has fractured. Those pro-labor elements of the Democratic Party and progressive left, with their desire for more local and worker-oriented economic control, have had much of their agenda hijacked by ideologues whom they would otherwise find anathema.

In addition, liberal Seattle remains deeply committed to trade. In courting the WTO to hold its 1999 conference in Seattle, then-Mayor Schell and members of the Port of Seattle Commission believed that Seattle was the perfect spot to show off the glories of free trade policies. Democrats split on that nationally, but most members of Seattle’s business community were cheerleaders for it. Our state, in general, depends on trade, what with Boeing, as well as wheat, apples and other agricultural products. Our Puget Sound ports are also key to goods flowing in and out of the country.

But WTO also showed off the city’s yin and yang of competing views: a pro-business town with a tradition of protest and lefty leanings — the old “Soviet of Washington” image that clung to us after 1919. Michael Moore, speaking in Seattle on the eve of the protests, rhetorically asked the audience at KeyArena, “The WTO in Seattle? What were they thinking?” They were thinking it would be a showcase for the aspirational “world-class” city. They weren’t expecting a fiasco.

The protests of ’99 hoped to inspire a different arc to the new century — a vision of greater global equity, environmental awareness, fairer labor standards, a U.S. government that allowed for localism, but also for wiser international engagement. However, the localism turned into nativism. International cooperation is under attack. Nationalism and bullying are the new drivers of U.S. foreign and domestic policies.

The WTO demonstrations highlighted some major problems that the right and left agreed on, but as of the 20th anniversary of those protests, the far right and corporate interests appear to have won out.

This column previously appeared in the November issue of Seattle Magazine.

by / January 14
Inside Crosscut