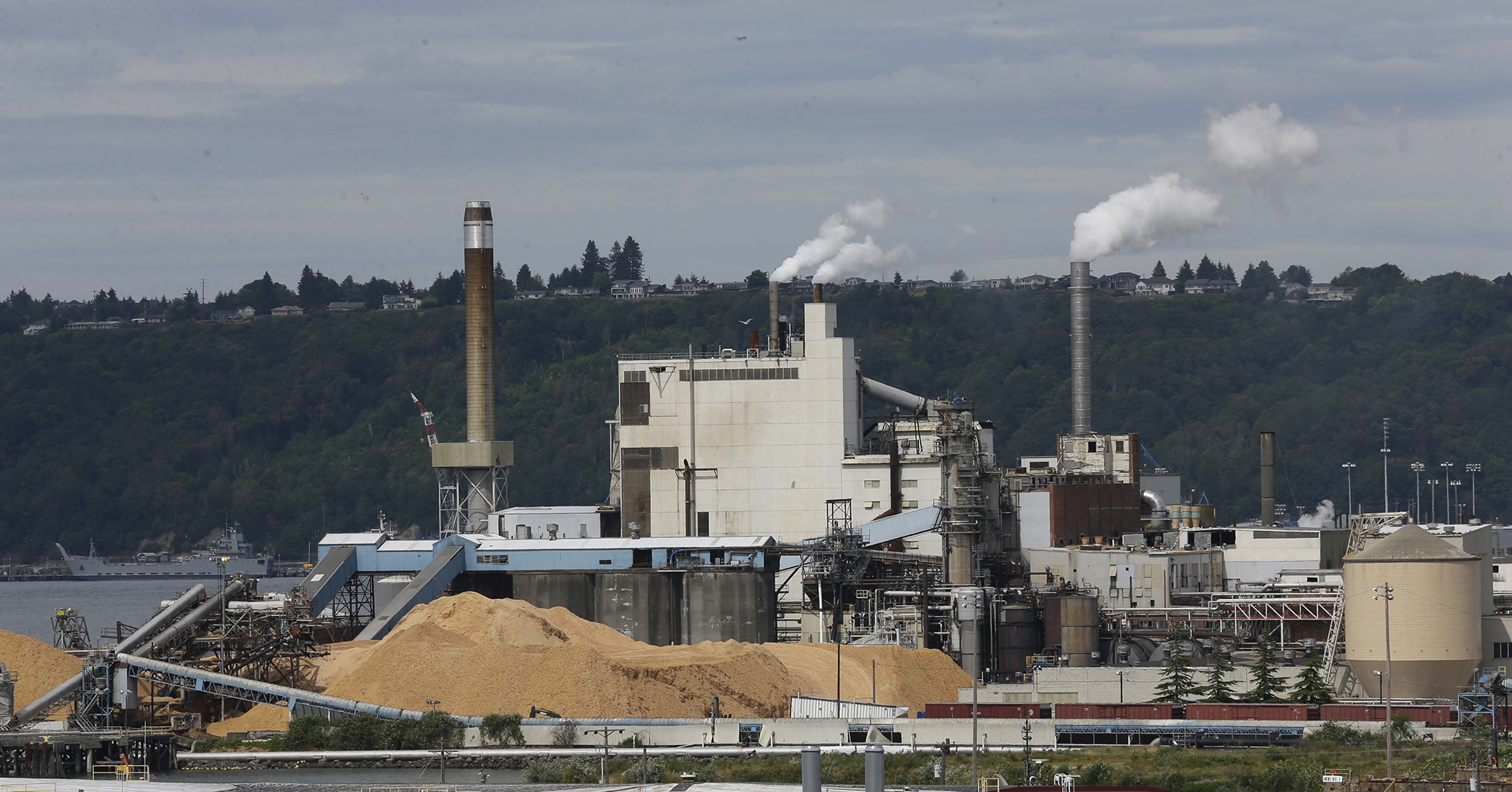 Piles of wood chips sit near the RockTenn paper mill in Tacoma, June 1, 2016. State measures to limit greenhouse gas emissions from large polluters, including the mill, aren't on track to meet the targets set in current law. Despite this, Inslee is pushing the Legislature to increase the state’s goals and pass a new law making the target even stricter. (Ted S. Warren/AP)

Twelve years after the Washington Legislature first codified limits on greenhouse gas emissions, lawmakers are considering a new bill that would establish even stricter state targets.

The original legislation, passed in 2008, sought to reduce greenhouse gas emissions to 1990 levels by 2020, a goal that the state has not met. In fact, emissions are 8% higher than 1990 levels.

This week, he said swift action is needed now more than ever — especially given the state Supreme Court’s decision Thursday to strike down parts of his Clean Air Rule. The 2016 rule capping emissions from certain businesses was a key part of Inslee’s efforts to meet the state’s existing pollution-reduction goals.

Inslee said the latest science has shown that even those goals are insufficient, and that the state must do more.

Rep. Vandana Slatter, D-Bellevue, is sponsoring Inslee’s proposal to set tougher pollution-reduction targets. She compared the legislation to a roadmap — without it, the state doesn’t have a clear direction for needed action to take. Furthermore, she said Washington is overdue for an adjustment to the 2008 targets it set in place.

In addition to the greenhouse gas emission targets outlined in the 2008 bill, the law also required the state Department of Ecology to work closely with the Climate Impact Group from the University of Washington. Together, they review the most updated science after global assessments from places such as the Intergovernmental Panel on Climate Change (IPCC) are released. The two state agencies must then determine if adjustments should be made to state statutes.

Published in 2018, the most recent IPCC report was dire: Global warming increases of only 1.5 degrees Celsius will have “severe consequences” in Washington.

And so the new recommendations from the Department of Ecology and the UW group were drafted into the policy being considered this session. The recommendations call for a steep decrease in greenhouse gas emissions in only 10 years, aiming for emissions to be 45% below 1990 levels by 2030.

Outside of the Legislature, some experts agree there is value in raising state targets.

Karen Litfin, a UW political science professor, said she believes there are important benefits to setting new goals, even if the current ones aren’t being met. Litfin has studied and written extensively on the intersection between scientific recommendations and politics.

Litfin said even though Washington is ahead of many states when it comes to reducing emissions, by doing more, the state can lead by example and show others what is possible.

In the future she believes “the climate crisis will rise to the top of our national agenda.”

“When that happens, political leaders and states at the forefront will be credible leaders on the national scene,” said Litfin.

Other legislators are not so sure about the emission-reduction targets included in the new bill.

Sen. Doug Ericksen, the ranking Republican on the Senate Energy, Environment and Technology Committee, said he thinks there is no reason for Washington to try and “punish” itself by attempting to meet new goals. In the past, he has fought against similar proposals that tried to increase the state’s greenhouse gas-reduction targets.

“We waste all of our money on a frivolous pursuit of a carbon jihad in Washington state,” Ericksen said.

Ericksen dismissed the idea that carbon dioxide is pollution at all, calling it “plant food” and one of the “things we need to survive.”

The IPCC report, however, identifies carbon dioxide as a major contributor to rising global temperatures.

Slatter noted that the bill setting stricter pollution-reduction targets won’t curb emissions on its own. She said adopting a clean-fuel standard, another measure championed by Inslee, would help significantly.

While Inslee has found some success in pursuing his environmental agenda over the years, he has also hit roadblocks.

Lawmakers declined to pass his clean-fuel standard bill last year, even as they adopted several of his other proposals to reduce emissions. One of those bills was a plan to move the state to 100% clean electricity by 2045.

The latest setback to Inslee’s plans to reduce pollution came Thursday, when the state Supreme Court invalidated parts of his Clean Air Rule. The rule, which Inslee created through a 2015 executive order, was the governor’s attempt to reduce emissions from the state's top polluters, after legislators declined to adopt his cap-and-trade proposal that year.

The rule would have gotten the state two-thirds of the way toward meeting the greenhouse gas reduction targets set in 2008, state officials said. But Thursday’s ruling weakens the rule significantly by limiting the types of businesses affected.

Inslee said the court ruling has made him even more committed this year to passing a clean-fuel standard, which would require producers of gasoline and diesel to reduce their emissions.

“The need for the clean-fuel standard is even more apparent today than it was compared to yesterday,” Inslee told reporters Thursday.

Washington state is a founding member of the U.S. Climate Alliance, a group of states that have pledged to continue working toward the goals of the Paris Agreement, the global climate accord signed by more than 150 countries.

While the U.S. government has expressed its intent to withdraw from the Paris Agreement, states within the alliance have committed to finding ways to reduce greenhouse gas emissions on their own.