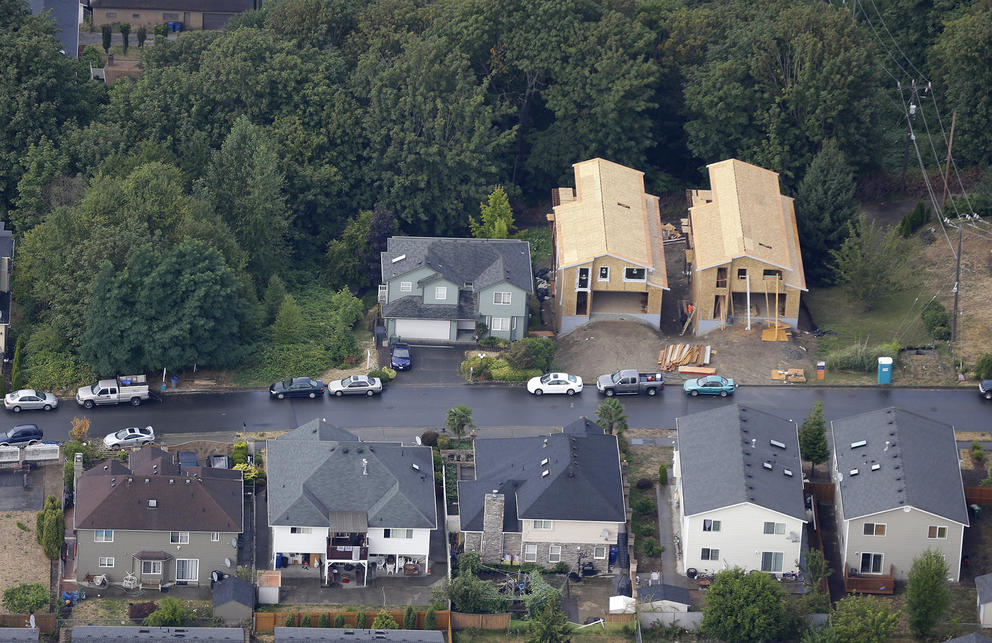 Two houses under construction in a Seattle neighborhood are seen on Aug. 2, 2014. According to a report from Up for Growth, a Washington, D.C. nonprofit research firm, the state of Washington failed to build enough new homes between 2000 and 2015 to meet housing demands of a growing population. (Ted S. Warren/AP)

An additional 225,600 homes should have been built between 2000 and 2015 in Washington state to keep up with growing demands for housing, according to a new report released Friday that calls the Evergreen State the eighth worst in the U.S. for underproduction of homes.

The report, by Up for Growth, a Washington, D.C., nonprofit research firm, says California and Florida have the worst record for housing production not meeting demand and found that the nation underproduced homes between 2000 and 2015 by 7.3 million units. The organization's newest report, a follow-up to its 2018 housing shortage report, takes a magnifying glass to each county in Washington state, highlighting areas where job growth or households being formed were particularly high in comparison to the number of housing units built.

State lawmakers hope to address the state housing shortage from a variety of angles, from making it easier for builders to produce homes by lowering impact fees to feeding money into the state’s Housing Trust Fund for affordable housing projects.

State Rep. Nicole Macri is working on a bill inspired by an Oregon measure that allows duplexes to be built in areas zoned for single-family homes. She generally hopes to add density to areas that have the most restrictive zoning in the state.

“The tension is often in different stakeholders perspective on whether or not we’ve struck that balance in the best way,” the Democrat from Seattle said.

Republican Sen. Hans Zeiger says there’s bipartisan recognition among legislators of the housing shortage, and there’s room for disagreement when it comes to dealing with it in ways that impact people in the rental market.

“Where we’ll find the most disagreement is where it comes to a regulatory or limitation kind of approach. I think that efforts to impose rent controls or to add new layers of regulations — I think those kinds of efforts are going to [be met] with a lot of disagreement across party lines,” the Puyallup lawmaker said.

Up for Growth Executive Director Mike Kingsella says the acuteness of the issue depends on what part of Washington you’re looking at. In the report, King County has the most off-kilter ratio of jobs formed to housing units created — 3.3 jobs to one unit. The report also indicates that many Western Washington counties have fewer housing units being built per each household formed. Multiple western counties from Pierce County up to Whatcom County have only 0.5 to 0.75 housing units built per household formed.

While Kingsella said a functioning housing market should produce 1.1 housing units for every household formed, the report shows Washington produces 0.99 houses for each household formed. This creates the supply-and-demand imbalance that’s resulted in the statewide housing shortage that Kingsella calls “one of the most severe in the country.”

If these trends continue, he said, Clark County will become “the next Seattle, as far as unaffordability” is concerned, with Eastern Washington communities not far behind. In order to mitigate this, the report suggests policies that emphasize an “accessible growth,”  which means building higher-density housing that leverages existing infrastructure and is built near transit.

“Every part of our state is feeling the pinch,” the Democrat from Bellevue said. “We’re all experiencing the same issues — that is, housing affordability and homelessness. But they’re not experiencing them in the same way. Communities are going to need to have flexibility in order to address the needs on the ground.”

Kuderer and other state legislators look to last year’s passage of House Bill 1923 as one instance of successful flexibility within housing legislation. The bill provided cities with a “menu” of options to provide incentives for housing density, like allowing backyard cottages and basement apartments in areas zoned for single-family homes or allowing 25 housing units per acre near high-frequency bus stops. In its first draft, the bill would have made it mandatory for cities to carry out at least two items on the “menu.” Later the list became optional, which garnered the legislation bipartisan support.

Macri hopes the Legislature will build on that bill’s success this year.

“There’s a lot of work that we’ve done in the Legislature that I’m hoping we’ll build on, including a lot of bipartisan work around building housing supply and incentivizing communities to look at affordable production,” said Macri, who is the deputy director of the Downtown Emergency Service Center, a Seattle nonprofit focused on housing and homeless services.

Zeiger says he thinks lower impact fees on housing developers would encourage them to create more affordable housing. He says a lot of the ideas being discussed this year have the potential for bipartisan support. Last year, lawmakers from both parties were more interested in incentives for housing affordability and development than having the state tell local governments what to do.

“You want local citizens to control their own destiny,” Zeiger said.

Kuderer is also interested in incentivizing home building and plans to introduce legislation that would create a funding mechanism for the Housing Trust Fund for affordable housing projects.

“We need to incentivize building, both in terms of for-profit and nonprofit, and working collaboratively with all levels of government to make this happen,” she said.

Balancing the wishes of local governments, legislators and interest groups is tricky, Kuderer acknowledges. Looking toward this year’s legislative session, she said, “The goal is going to be to craft legislation that facilitates [housing development] for communities and doesn’t unduly restrict them.”

by / January 12
Inside Crosscut