Fresh off a strike and still without a contract, Swedish nurses say they’re struggling to keep up with the pandemic. 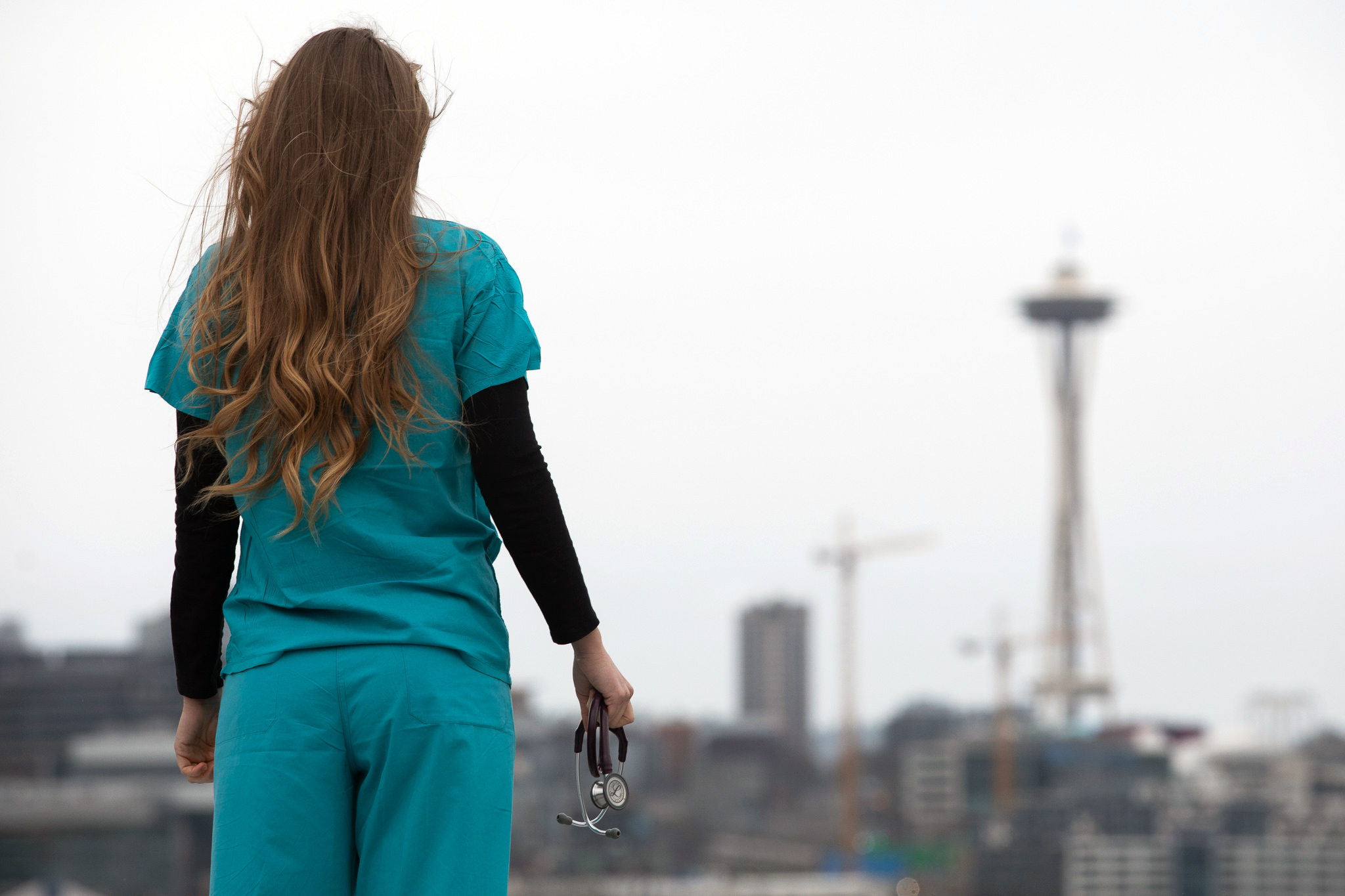 Intensive care nurses at Swedish Medical Center are working without a contract and struggling to keep up with COVID-19. "It's all just so insane right now, we were never prepared for something of this magnitude," a nurse told Crosscut on March 26, 2020. (Matt M. McKnight/Crosscut)

Fliers for this year’s nurses’ week have begun to appear in the staff rooms at Swedish Medical Center, promising games and a chocolate fountain for employees.

It’s been nearly two months since Swedish caregivers ended a three-day labor strike over staff ratios and pay, and then were locked out of the hospital when they tried to return. And it’s been one month since the first confirmed death from COVID-19 in Washington state launched a frenzied period for the region’s medical providers.

“We’re having this internal conflict right now,” said one intensive care unit nurse, who asked not to be identified for fear of retribution and because labor negotiations are ongoing. On the one hand, the nurses are more motivated than ever to work extra shifts and help stretched colleagues; on the other hand, they don’t want to signal that the current staffing levels are acceptable.

“You need to step up and do your part,” the nurse said of leadership.

The battle between the nurses’ union and Swedish leadership is ongoing; as with much in the time of coronavirus, it has only been paused. The two sides have been negotiating a new contract for nearly a year without resolution. Gov. Jay Inslee’s office stepped in to mediate negotiations last month, only to announce that talks were on hold as the coronavirus outbreak began to spread.

Those talks, however, apparently resumed. Nurses were notified Friday that their bargaining committee members had reached a tentative agreement with management and were recommending a "yes" vote, but no specifics were made available. Members will begin voting on the proposal Saturday March 28. Ballots will be counted Monday, April 6.

Swedish spokesperson Tiffany Moss said, “We are hopeful the union and Swedish will soon reach agreement.” A spokesperson for SEIU Healthcare 1199NW declined to comment, citing the ongoing negotiations.

Even as the negotiations slowed down, many of the underlying issues could not be paused; in fact, the stress of the coronavirus has served to expose and even exacerbate workplace tensions inside Swedish that never went away.

Two nurses in the hospital’s intensive care unit told Crosscut they feel unsafe and underpaid and that staffing is tight.

Meanwhile, contracted crisis nurses, brought in to boost staffing, are being paid more than the in-house crews, which Swedish staff members say serves as a daily reminder that the union still doesn’t have a contract and that they have not been given raises. Some veteran ICU nurses have already left or are threatening to leave, the nurses said.

Moss said Swedish has implemented a number of new policies in response to COVID-19, including continuation of pay when services have been paused, additional emergency time off and backup child care or elder care for staff. They’re working with the union to implement additional programs, but so far have not offered hazard pay. “The safety of our caregivers and patients is our top priority, especially during these unprecedented times,” Moss said.

What they don’t need, they say, are chocolate fountains.

“We’re not dogs that are going to sit for a treat,” said a second ICU nurse. “We’re humans. We need to feel validated and valued for the hard work we’re doing. Give us some [personal protective equipment] and give us some hazard pay.”

There are tricks to managing a pandemic with a scarcity of resources.

When sterilizing the only N95 mask each of them have for their shift, nurses have learned to only lightly dab it with cleaner. Drench it and it will become limp, and the next time its owner enters the intensive care unit, a draft of air may sneak through the sides. When they do take the mask off, they tuck it into a paper bag and write their name across the side for later use.

For protective hoods — once intended for single use — repeated sterilization can cause the collars to sag, so it’s good to have a designated safety person on hand who can recognize when the seal may be broken.

They learn to write backwards. Coming and going from patients’ rooms uses up protective equipment, so nurses have taken to scrawling messages — instructions, requests — on the windows for their co-workers on the outside to read.

When COVID-19 first appeared in Washington state, Swedish nurses completed an online training module in which they were told that those infected with the coronavirus would be taken to Swedish Issaquah.

But as the number of cases in King County passed 1,000 and the number of deaths has exceeded 100, ICUs at every hospital have needed to brace for a surge of patients. “When push came to shove and we were getting all these COVID patients, we weren’t actually sending them to Issaquah,” one of the ICU nurses said.

At Swedish on First Hill in Seattle, staff have begun flipping floors to expand the 32-bed ICU by 16 additional beds and converting parts of the pediatric wing to handle patients transitioning out of intensive care.

Staff from other units — post-anesthesia, intermediate care, pediatrics — have been conscripted into the ICU. It’s welcome help, but it means veteran nurses are training their colleagues on the go.

“My heart goes out to them because a lot of them are very scared,” said one of the ICU nurses. “It’s not their environment.”

But even for longtime ICU nurses, the shortage of supplies, in addition to news about health care workers dying of COVID-19, is wearing them down. They fear their equipment is not effective. They fear bringing the virus home. And they fear the time when their hospitals look like those in Italy, and they must decide who gets a ventilator and who doesn’t.

Staff find themselves turning away patients’ loved ones. One of the ICU nurses described using her own phone to let a family FaceTime with a patient on a ventilator. They sang to him.

With the trauma and fear of the coronavirus lingering over them, the nurses said the weight of working without a contract is compounded. Contract crisis nurses are serving only non-COVID ICU patients, but their pay is higher than nurses in the middle of the real crisis. One staff nurse said she makes about $3,000 per biweekly paycheck; some job listings for crisis nurses promise more than double that amount.

“It’s just frustrating because we feel like we are giving our blood, sweat and tears, and now we are exposing ourselves to this disease and we aren’t worth it to them to get a contract,” said another ICU nurse. “We just want to be compensated for all the hard work we’re doing. It’s definitely increased my stress.”

Moss, the Swedish spokesperson, said, “We are grateful for our caregivers’ unwavering commitment to our patients and the selflessness they bring to work every day to ensure our patients and community are safe.”

Swedish management offered pay bumps of just over 11% and what CEO Guy Hudson called “the strongest package provided by any health care employer in the region.”

But the talks broke down, mostly around staffing ratios, as nurses and caregivers complained they were stretched thin and patients were suffering. Vacancy levels there were more than 6%, according to reporting by The Seattle Times, higher than other hospitals in the region.

Inslee said in a statement earlier this month that resolving the contract dispute remains a priority.

“The hard work of a new contract must still get done for the long-term stability of a very important health care system,” Inslee said. “We will be looking to reconvene as soon as possible."

The nurses Crosscut spoke with said they fear turnover will soon increase. Nurses are in high demand right now, and Swedish employees have seen their peers elsewhere receive bumps in pay. Their own union recently celebrated increases of up to $10 an hour for registered nurses at a different medical organization, Multicare.

“We’ve had a lot of people leave,” said one nurse. “I feel like the people that are left are kind of the last group. We’re just trying to hold down the fort…. I feel like we’re just these little toothpicks holding up this giant block and if one of us goes it’s going to crumble.”

“We’re all very much on edge,” said another nurse. “We’re trying to be as kind as possible but we’re also very short-tempered and emotional. One by one, we’re all cracking.” 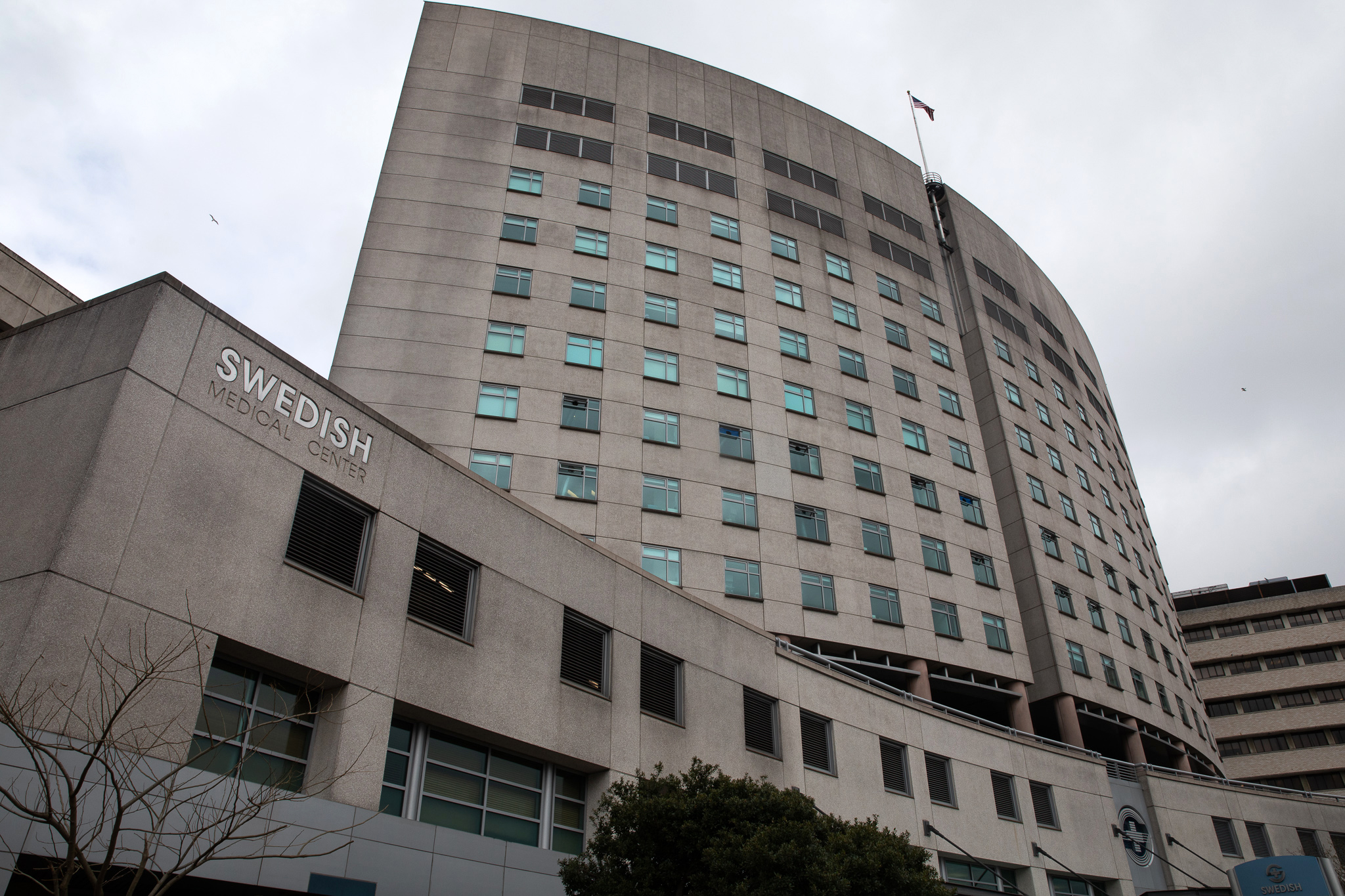