Washington leaders and the public are frustrated with those who aren't taking health guidelines seriously. 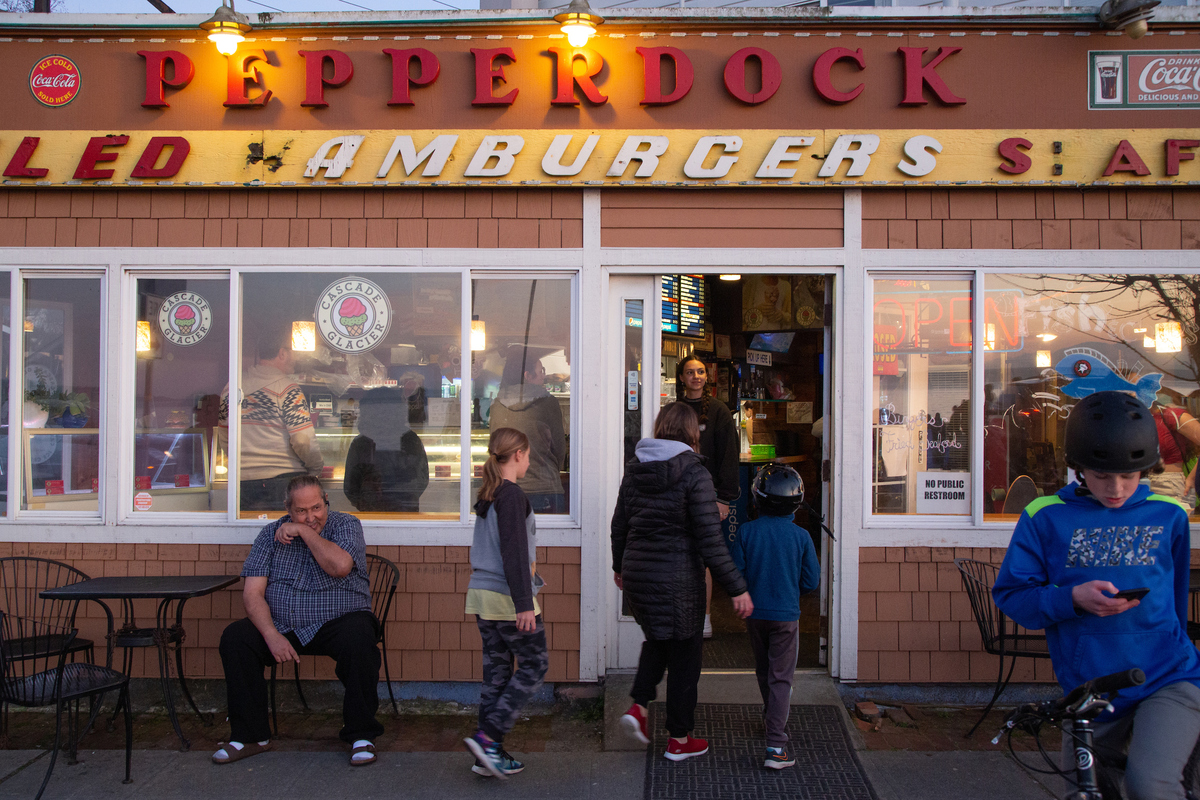 Customers enter Pepperdock Restaurant by Seattle’s Alki Beach, March 19, 2020. New social distancing measures have closed down bars and restaurants in Washington state, with the exception of takeout and delivery services. Local officials have urged people to either stay home or stay 6 feet apart when going out. (Jen Dev/Crosscut)

On a typical sunny day at St. Andrews Bar & Grill on Aurora Avenue, the door remains wide open, allowing people walking by a peek at the row of customers sitting at the bar casually having a drink. But last week, despite the sunshine, no day was typical in Seattle. And yet St. Andrews was still full of customers having drinks in spite of the governor’s order shutting all bars and limiting restaurants to takeout only.

Outside the restaurant hung a sign:  “We tested negative for coronavirus.”

On March 13, an employee posted a picture of the sign on Facebook, joking that the bar and restaurant is the only one “endorsed and recommended by both the CDC and the American Medical Association.” When asked about the sign on Thursday, the owner, who refused to give his name, claimed everyone on staff at the restaurant had tested negative for COVID-19.

He then argued it was more dangerous for people to wait in a long crowded line at Costco than it was for customers to have a drink while waiting for their to-go orders. He indicated a reporter from Crosscut should leave. According to a news report in the Seattle Post-Intelligencer, Mark Wall and Craig Gibson opened St. Andrews Bar & Grill in 2005.

“The problem is selling drinks even under the auspices that a customer is there for a to-go order potentially creates a scenario where more people end up congregating in close spaces,” said Mike Faulk, a spokesperson for Gov. Jay Inslee, when asked whether serving drinks at a bar was allowed under current state orders meant to combat the spread of COVID-19.

All across Washington state, government officials and, some might say, the majority of the public have been frustrated with citizens who aren’t taking orders to self-isolate seriously.

At Alki Beach in West Seattle on the first day of spring Thursday, one man sat alone reading a book with a dog on his lap, while others, such as teenagers playing Frisbee, interpreted social distancing a little more loosely.

One young woman sitting with a group of about five others around a bonfire declined to answer questions, but said: “We just wanted to spend some time together since we were quarantined the rest of the day.”

At a press conference last week, Inslee begged the public to voluntarily follow the state and federal government’s recommendations for social distancing.

“I’m asking you, and you may say I am pleading with you, to stay home unless it is necessary for you to go out,” Inslee said. “The penalty is you might kill your grandparent.”

“It’s a moral crime to put other people at risk,” he added.

Yet over the weekend, people continued to gather, most noticeably outside. Seattle Police and the city’s Department of Parks and Recreation, have begun patrolling popular gathering spots, such as Capitol Hill's Cal Anderson Park, urging people to go home.

At Green Lake Park on Saturday, a couple of dozen men of all ages played basketball in the sun, a day after officials announced Seattle and King County would be closing all playgrounds and sports courts.

Rom Torribo, 51, an employee at Boeing standing on the sidelines of the basketball court, pointed out that none of the players seemed to be sneezing or coughing. “I just kind of look at the players and think, ‘Oh, they look fine,’ ” adding that exercise is “good for your body to fight the infection.”

Sneezing or coughing is just one way to spread this virus, according to the Centers for Disease Control and Prevention. It may also be spread by touching a surface, like a basketball, that has been touched by someone who has the virus and then touching your nose, mouth or eyes. Scientists still don’t know everything about this new virus, but they do believe people with no apparent symptoms can still spread the disease.

Torribo said he knows that people can carry the virus and display no symptoms but said he thought playing outside was probably safer than doing so indoors. Since gyms and community centers are closed, playing indoors is not an option for most people.

Torribo admitted that a shelter-in-place order would change his behavior.

On Monday, Inslee issued a statewide stay-at-home order, which directs individuals to stay home and nonessential businesses to close. New York, California and Illinois, as well as certain tribes, such as the Lummi Nation and the Makah have had shelter-in-place orders in effect. On Saturday, the city of Everett ordered shelter in place, although certain businesses, including Boeing, were exempt. Boeing is expected to close down its production line for at least two weeks after an employee died from COVID-19. The Yakima Health District also issued a stay-at-home order late Sunday night for the county.

Before the stay-at-home order, Inslee shut down restaurants and bars, places of entertainment and recreation, schools and funerals, and encouraged employers to allow employees to work from home.

When asked about the consequences of failing to follow Washington state’s social distancing guidelines, Faulk said: “Failure to comply with a governor’s emergency order may be subject to criminal prosecution.” Violations of the emergency orders amounts to a gross misdemeanor, Faulk said, which can be reported, investigated and referred to the prosecutor’s office.

“As with any misdemeanor offense, conviction may be punishable by fine and/or jail time,” he said.

Faulk said local health departments or the state’s Liquor and Cannabis Board could also revoke a business license.

“Literally everyone has a role to play. The sooner more people observe social distancing, the better to manage the pandemic and ultimately get life back to normal,” Faulk said.

But even cities or states with shelter-in-place orders have struggled with crowds. In Northern California, for example, people have flocked to the beach in large enough numbers to congest traffic.

In Washington state, some hiking trails have been crowded, and some have questioned whether residents are increasingly leaving urban centers and traveling to more rural communities, such as the Methow Valley, in the midst of the pandemic.

“It’s a small place, and a slow time of year, so you can tell when people show up,” said Chris Solomon, a freelance journalist living outside of Winthrop. He said he has noticed grocery stores seem busier than usual.

Sue Joslyn, a psychology professor at the University of Washington who specializes in decision-making, said shelter-in-place orders would likely have to come with a good explanation to be effective.

“People always want to know why,” Joslyn said. “If you just tell them what to do without explaining why, that doesn’t really help.”

Despite Inslee’s extensive pleas, Joslyn said, some might choose to ignore social distancing guidelines because they assume that authorities are giving them worst-case scenarios.

“It may be for them the benefits do outweigh the risks,” Joslyn said. “On some level it’s making sense to them or they wouldn’t be doing it.”

At Compass One Catering, which contracts exclusively with Amazon, employees were still required to go to work, even though the online giant was one of the first employers to allow workers to report from home.

When asked why caterers had continued to report to work when Amazon offices sat mostly empty, a Compass One employee who asked to remain anonymous because she feared losing her job said: “We wonder the same thing.”

Employees had the choice to not come in and not get paid "but most of us can’t afford to do that,” she said. Employees were still working, she added, but “just more so projects than actually delivering food.”

Another employer, Unionbay Sportswear, headquartered in Seattle, had continued to require employees to come into work in part because it has a small number of employees and lots of work space, according to a company email.

The company increased cleaning, including on railings, handles and elevator buttons, set up a thermometer station, distributed hand sanitizer and encouraged employees to stay home if sick, according to a March 9 email obtained by Crosscut.

An employee, who asked to remain anonymous because she feared losing her job, said a colleague traveled to Disneyland with a friend who later tested positive for COVID-19. That colleague worked in the Seattle office last week for about a day before notifying management.

The office has since shut down for at least 14 days, but the Unionbay employee said she resents potentially being exposed to the virus.

In response, Michelle Moeller, vice president of operations at Unionbay, said, “For any employee who thinks we should have closed the office earlier, I would reiterate that our consistent message has been proactive prevention and social distancing.”