Citing summer-peak crowds and an increase in injuries, the Pacific Northwest Region of the United States Forest Service limits access to recreation sites. 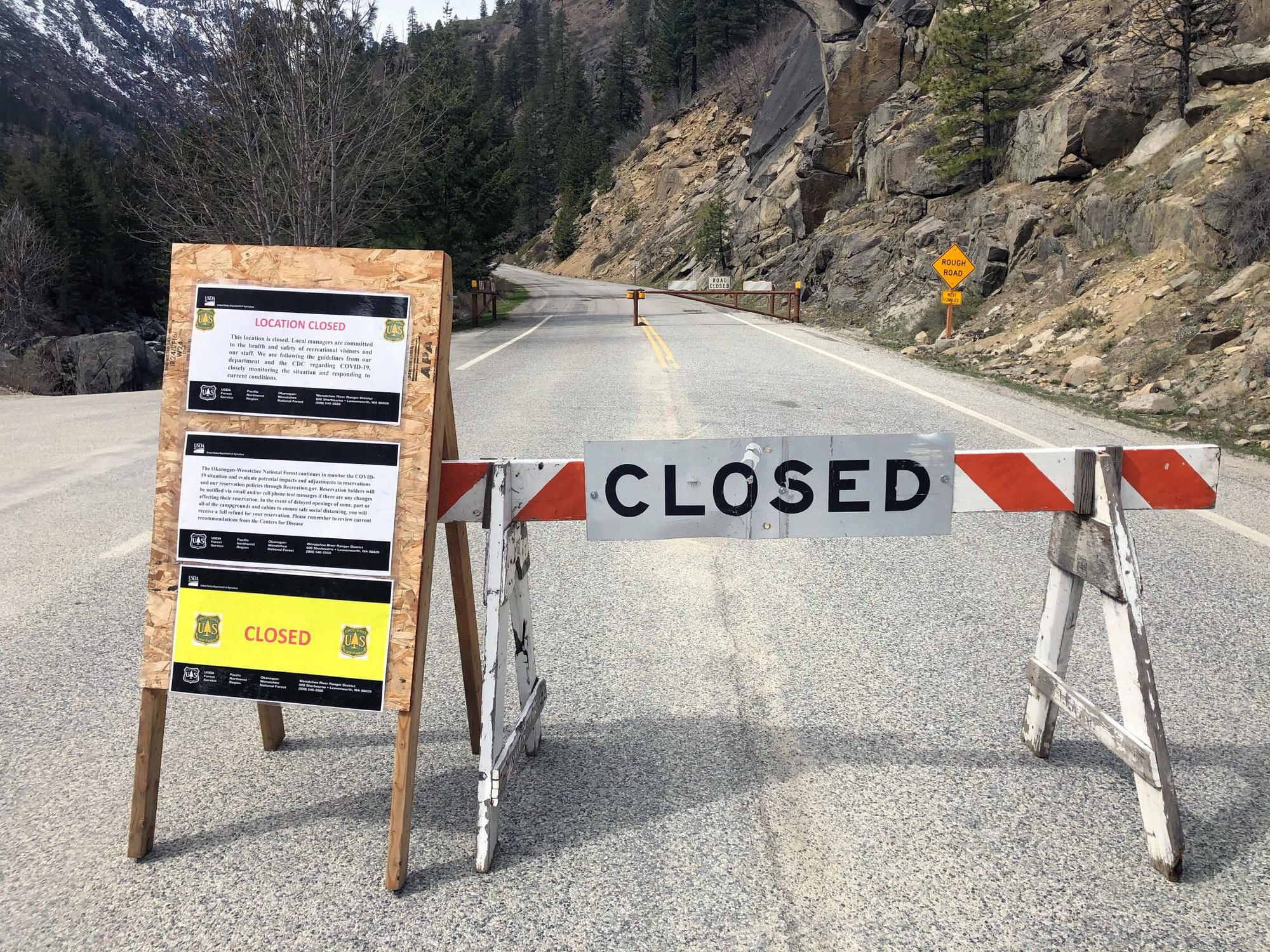 A barricade erected March 30, 2020, on Icicle Road near Leavenworth, WA, indicates that the Snow Lakes Trailhead is closed until further notice due to health risks associated with COVID-19. (Okanogan-Wenatchee National Forest)

On March 30, following the closure of a substantial amount of public land across Washington and Oregon, the Pacific Northwest Region of the U.S. Forest Service limited access to recreation sites.

All developed recreation sites on national forest land in both Oregon and Washington are now closed to the public for the foreseeable future. These include trailheads, campgrounds, cabin rentals, visitor centers, snow parks and all bathrooms.

The Forest Service closures come in response to stay-at-home orders enacted a week ago by both Gov. Jay Inslee of Washington and Gov. Kate Brown of Oregon. Following those orders and previous social distancing measures, land managers across the state say they saw a surge in visitation to Forest Service land over the past several weeks.

“One thing that we did not expect is that once this stay-at-home guidance came forward, we saw an enormous increase in recreationists that were hitting the trails,” said Colton Whitworth, public affairs specialist with the Mount Baker-Snoqualmie National Forest.

“Unfortunately, right now, not many of our trails are snow-free,” said Whitworth. “We’re seeing injuries, hurt hikers and more people than ever in the lower-elevation trails.”

The regionwide closure order follows efforts of a few individual forests to take action against weekend overcrowding: Gifford Pinchot National Forest in southwestern Washington, Mount Hood National Forest in Oregon and the Columbia River Gorge National Scenic Area, which spans both states, all restricted public access to their trailheads several days before the entire region did.

“They were swamped with visitation coming out of the Portland metro area,” says Tom Ibsen, developed recreation program manager of the Forest Service’s Pacific Northwest regional office. “We’ve been seeing peak summer visitation on spring weekends that has really overwhelmed the sites.”

Because of crowding at Multnomah Falls in particular, the Columbia River Gorge National Scenic Area has taken the extra step of closing all trails.

In all other Northwest national forest areas, trailhead parking lots are closed and will be cordoned off by gates, signage or barricades. Trails themselves aren’t exactly closed: It is still possible — and legal — for people to park on the shoulder of a Forest Service road and walk to a trailhead, but the Forest Service advises against doing this. Law enforcement officers have the authority to give citations or even arrest those who don’t follow the order, but officials hope that Pacific Northwesterners will stay home of their own accord.

“We encourage people to recognize that rural communities are struggling, and we don’t want to add strain to their already strained situation,” said Christopher Bentley, public affairs specialist with the Okanogan-Wenatchee National Forest.

Surrounded by the Okanogan-Wenatchee National Forest, the town of Leavenworth in Chelan County is normally a hotspot for outdoor adventure. It’s near popular climbing areas and is the closest access point to the Enchantments, a striking chain of lakes and peaks so popular that only about 8% of the 24,614 people who applied for an overnight permit there last year got one.

But Leavenworth Mayor Carl J. Florea personally asked the local Forest Service ranger to consider limiting public access to these areas after recreationists from Western Washington continued to travel to the 2,000-person town, despite the governor’s order to stay home.

“They were thinking that the thing to do to escape the [public land] closures on the west side was to come to the east side, but what that does is further the spread [of COVID-19],” says Florea.

“We had far too many people still coming our way, and it goes against the whole spirit of shelter in place,” Florea adds.

Local Washington hiking and climbing organizations, like the Washington Trails Association and The Mountaineers, have encouraged their members to stay home. The Mountaineers has paused all its outdoor education programs in the wake of COVID-19, and while CEO Tom Vogl says he’s hopeful that normal activities can resume by summertime, he understands the disappointment and uncertainty that outdoor enthusiasts are facing.

“The outdoors is a part of who I am, so it’s been really hard modifying my own behavior and accepting that I can’t go hiking right now,” Vogl says. “So many of us are just wired that way, where we want the solitude of wilderness, but there’s just not a way to do that safely without putting public health at risk.”

The Forest Service closure is authorized until Sept. 30, but Whitworth of the Mount Baker-Snoqualmie National Forest says how long it lasts depends on guidance the Forest Service receives from the Centers for Disease Control and Prevention and the governors of both states.

“It would definitely be rescinded once guidance suggests it’s no longer needed,” Whitworth says.