What does it take to reopen Washington's wilderness? 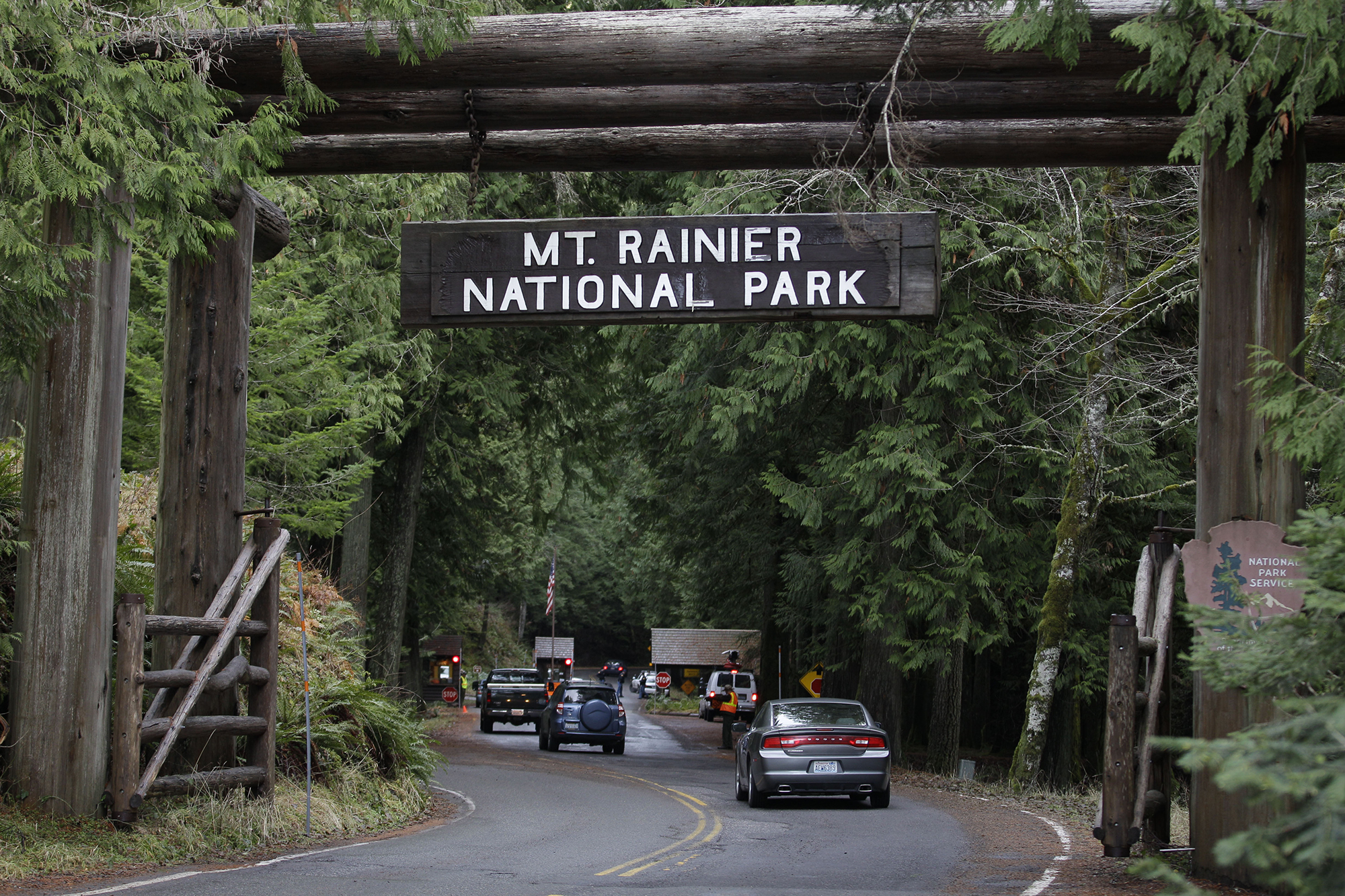 The west entrance to Mount Rainier National Park during busier times in 2012, before COVID-19 health concerns brought parks to a standstill. As Washington considers how to reopen public lands, social distancing will remain a priority. (Ted S. Warren/AP)

The last week of March, public lands across Washington shuttered one after another in response to Gov. Jay Inslee’s “Stay Home, Stay Healthy” order. For more than a month, many avid hikers, climbers and skiers kept their adventures closer to home or skipped them entirely, and the Washington Trails Association advised that if someone had to drive to get to a hike, it was probably too far away.

Behind the scenes during those weeks without wilderness, outdoor advocates and public lands managers had an inevitable challenge to consider: reopening.

“Within days of us closing to vehicle access, while there was still a lot of press coverage and anxiety around whether a lot of national parks were going to reduce their service, we had already turned our attention to ‘Oh my gosh, what does this mean when we need to restore access?’ ” says Chip Jenkins, superintendent of Mount Rainier National Park. “What does this mean for normal spring opening, for bringing summer employees on, for climbing season?”

Like businesses and communities across the country, Jenkins and other managers of public lands are grappling with the fact that reopening to the public does not mean snapping back to normalcy. For some, the pandemic has brought delays in seasonal hiring, smaller budgets and increased workloads while trying to manage higher-than-normal rates of visitation from a cooped-up public with few other options for recreation.

Although most state lands reopened May 5 for day use, many national forest trailheads remained closed until May 22, and all three national parks in the state still have partial closures in place. Campgrounds remain closed almost everywhere, though state parks recently announced that camping can resume in 22 counties beginning June 1.

Recognizing that this asymmetrical reopening could cause confusion and that the public health crisis isn’t over, REI and the Washington Trails Association launched the Recreate Responsibly Coalition on May 22 to provide clear guidance on how to get outside as the threat of the coronavirus stretches into summer.

“As public lands and waters were gradually starting to reopen, we started to notice the likelihood of inconsistencies across boundaries and geographies,” says Taldi Harrison, government and community affairs manager at REI. “We were trying to figure out how we could head that off. We knew that people were super eager to get out beyond their neighborhoods, but it might be confusing.”

The coalition’s first act was to publish six universal tips for getting outside safely. With more than 100 current members, the Recreate Responsibly Coalition represents outdoor advocacy groups as diverse as the Washington Trails Association and the Pacific Northwest Four Wheel Drive Association, businesses like The North Face and Clif Bar, and land managers from King County Parks to the U.S. Forest Service. Harrison says that within the first 24 hours of launching, she received more than 250 requests from organizations wanting to join.

“The common theme is understanding how important getting outdoors is for everyone’s physical and mental health and how can we enable everyone to do that in a way that’s responsible and keeps our public lands open,” says Andrea Imler, director of advocacy with the Washington Trails Association.

“If we’re going to do this together and do it well, we need to do it as a combined effort so that the information’s clear and we all have a consistent message that we’re putting out there as much as possible,” says Imler. “People are excited to get back outside and they want to do it the right way.”

The coalition’s first recommendation is to “Know Before You Go”: That is, check to make sure the place you want to visit is even open before you leave the house. Reopening public lands hasn’t been a uniform process because the the pandemic's effect is different everywhere, and what’s safe for visitors, residents and employees depends on the location. The Washington Trails Association has made a point of updating its online Hike Finder tool with information about continued closures.

For example, at Wallace Falls State Park, one of 14 state parks that has yet to reopen, practicing social distancing would be a challenge on the narrow trail leading to the falls, and visitors naturally tend to congregate at viewpoints.

“Wallace Falls is a very popular destination, and they have to begin with a pretty small parking lot. People will park along the county road, which has a very small shoulder, for up to a mile,” says Anna Gill, communications director of the Washington State Parks and Recreation Commission. The decision to keep the park temporarily closed also took into account the safety of Gold Bar, a town of fewer than 3,000 people located just southwest of the park’s entrance.

Other state parks have reduced their capacity, and one is open only on weekends. Dash Point State Park, for example, located 35 minutes south of downtown Seattle and offering beach access on Puget Sound, has closed about half of its parking lot. Lake Sammamish State Park has done the same.

But Tobin notes that about 80% of the state parks operating budget comes from camping and cabin fees, Discover Passes or special permits paid for by visitors. Now, with less visitor money coming in and pandemic-related tasks added to their usual responsibilities, parks staff members are forced to prioritize.

“We’ve never lived through something like this before, and it requires us to do some things differently,” says Tobin. “If you went to Lake Sammamish right now, you’d see some high grass, which causes our staff a bit of stress. But we’ve been prioritizing cleaning.”

Vandalism and illegal trash dumping add to the workload. The Washington Department of Ecology has seen an increase in illegal dumping of waste since the beginning of the pandemic, and Tobin says that one weekend, the barricades his staff put up to limit parking — and thereby capacity — at Dash Point State Park were torn down, along with signs promoting social distancing.

In the Naches Ranger District of the Okanogan-Wenatchee National Forest, recreation manager Jerry Ford says he’s seen about four times as many visitors as usual, and because his district had to delay seasonal hires, it is operating with only about 11% of its typical workforce. Over Memorial Day weekend, Ford’s department worked every day, and had volunteers from other districts pitch in to help manage crowds.

Ford and his staff are also working to prepare developed recreation sites like campgrounds for reopening, a process more involved than “just swinging open a gate.” Before opening, Forest Service employees must test the water quality at campgrounds and remove any trees that might have become dangerous to the public over the winter, like those damaged by storms that threaten to fall on campsites.

And for the Forest Service and National Parks Service, where some seasonal employees traditionally live in group housing, tough decisions have had to be made about how to accommodate employees while following Centers for Disease Control and Prevention guidelines for social distancing. Leadership at Mount Rainier, for example, determined that they could fill only 112 beds while adhering to public health guidelines.

“We had to do this giant zero-sum game,” says Jenkins, the Mount Rainier superintendent, “of what are exactly the 112 jobs that are most important to fill?”

Because of these realities, even when the park does reopen to vehicle traffic, some things won’t look the same. For one, Jenkins doesn’t expect visitor centers to reopen anytime soon. And overnight accommodations for visitors inside the park might not be available for a while.

In practice, that means that opening Mount Rainier National Park back up to vehicle access is really a question of whether it’s safe to open the popular Paradise and Longmire areas to heavy visitation from the state’s two most populous counties. Because of this, Jenkins says the park will probably open its roads when King and Pierce counties move into Phase 2 of Washington’s “Safe Start” plan.

As the summer stretches on, the Recreate Responsibly Coalition plans to evolve its message to amplify public health advice as needed.

“Personally, I needed guidance. I went out hiking this weekend with my 15-month-old and my husband, and it was interesting to see how many people had face coverings and what the new trail norms are,” says Harrison, the REI manager.

“The end goal is that by following the guidelines, hopefully people feel more confident getting out there.”

Update: Information about state park campground reopenings and the number of parks that continue to be closed was added at 1:12 p.m. on May 29, 2020, following an announcement from Washington State Parks.