Amid scattered calls for Mayor Jenny Durkan to resign, the Seattle City Council will discuss the once-radical call to redirect funds from the police department to social services. 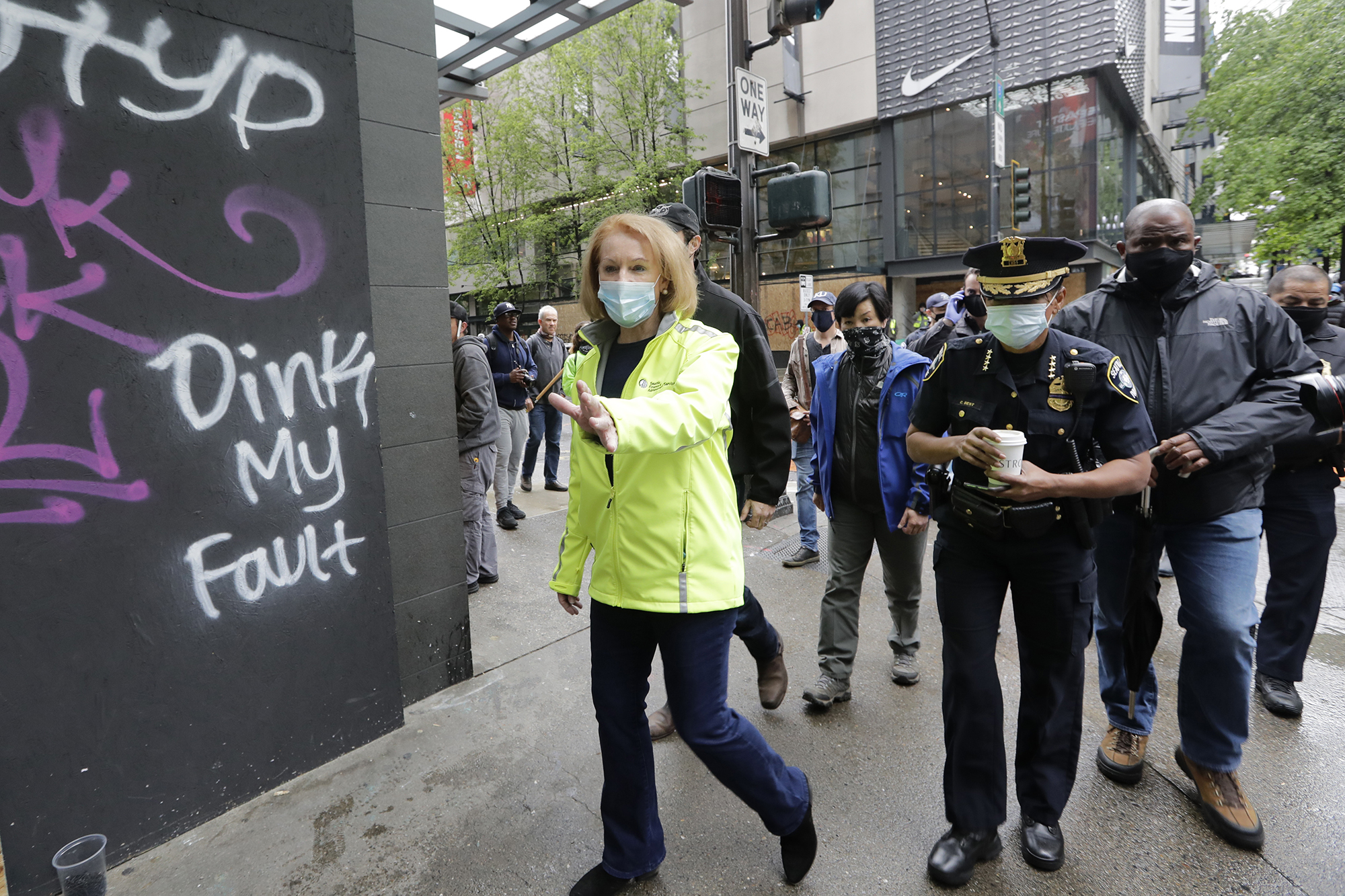 Seattle Mayor Jenny Durkan, left, surveys downtown Seattle with Police Chief Carmen Best on Sunday, May 31, 2020, following protests the night before over the death of George Floyd. On Sunday morning, hundreds of people turned out in downtown Seattle to help clean up the damage, sweeping up broken glass and cleaning off graffiti. (Elaine Thompson/AP)

In just over a week, as citywide protests have exploded, Seattle’s oft-polite politics are blowing apart at the seams.

The city’s plodding approach to police reform has suddenly been displaced by visions of a teardown and reimagining of the very definition of public safety. And the usually consensus-driven City Hall is in tatters, as council members attacked Mayor Jenny Durkan's leadership Monday, while three of them — Tammy Morales, Kshama Sawant and Teresa Mosqueda — urged her to consider resigning.

In a city known for its slow process — it took months to call for the resignation of a mayor credibly accused of molestation — the council's ambitions and the speed of its conversations are remarkable. The once-radical call to “defund police” is now on the agenda for the legislative body of a major American city.

“I have now come to a place where I believe you cannot fix what appears to be fundamentally broken,” said council President Lorena González, after years spent working on incremental reform.

Since at least the year 2000, the Seattle Police Department has never seen a budget reduction from one year to the next. Even through the dot-com bust of 2001 and the housing crash of 2008, as human services, housing, transportation and other departments saw cuts of up to and beyond $10 million, the police department continued to see its funding tick upward.

The current budget for the Seattle Police Department is $407 million — nearly one-third of the city’s entire general fund.

Seattle is facing at least a $300 million shortfall in the coming years. In the wake of the economic devastation driven by the COVID-19 pandemic, the police department was likely already headed toward cuts; Durkan said as much last week.

But the reductions elected leaders are advocating would go beyond, as Mosqueda said, “nibbling at the edges.” The pressure from more than a week of demonstrations since George Floyd was killed at the hands of a Minneapolis officer have forced the momentum.

“I am committed to defunding the police and using most of that money, 50% ideally, to invest back into the community," Mosqueda said Monday during a city council meeting.

Even the the council's more moderate wing — anchored by Debora Juarez and Alex Pedersen — pledged to work closely with their colleagues on redirecting funds toward community organizations.

“It’s just not a healthy tree,” said Juarez. “We need to plant a new tree.”

Budget discussions, usually reserved for the fall, are scheduled to begin this week because of the COVID-19 crisis and are expected to continue for weeks.

Additionally, the council is set to consider a bill that would permanently ban the use of what Sawant called “weapons of war” at protests, including tear gas, rubber bullets and pepper spray.

Durkan is under fire in a way she’s not been since she took office in 2017. Once upon a time, she tied her election to that of Mosqueda’s, saying “she was a person who ran a race with a very similar approach to mine.”

That relationship had already frayed, but was broken completely Monday. Mosqueda was incredulous at the continued use of certain crowd control tactics, including tear gas on Sunday, and said there was a “vacuum of true leadership” in the city.

On Sunday evening, Durkan dismissed calls for her resignation as a distraction. Nevertheless, every council member went after her Monday for the chaos that’s now a nightly feature on Capitol Hill. Not all called for her resignation, but they echoed points made in a recent letter — signed by state senators, representatives and council members — assailing police response to the protests. The situation was made worse by a pledge last week to halt the use of tear gas at protests, a pledge promptly broken Sunday night after Chief Carmen Best authorized its use.

Durkan has said that SPD’s budget will be cut. On Sunday, she said those cuts would go beyond just responding to the COVID shortfalls and that she would find $100 million to invest in community organizations, although not necessarily all from the police department. “We will examine SPD’s budget, and in addition to the partnership with Chief Best and the leaders of the community, really have a community-driven voice in that budgeting,” she said.

Durkan also listed actions her office has already taken or intends to take, including instructing officers to turn on body cameras, reviewing crowd management policies and withdrawing the city’s motion to remove federal oversight of the police department.

Yet the mayor — a longtime prosecutor before taking her seat in City Hall — has stopped short of reimagining policing as those in the legislative body have called for. Asked Sunday about a pledge by the Minneapolis City Council to tear down its department, Durkan pointed instead to the 2012 agreement with the federal government to rewrite policies on uses of force.

“That’s basically what we did through the federal consent decree,” she said. “We tore it down and rebuilt it around all uses of force. But we’ve road tested a lot of those policies in the last week or two weeks. We now know where we need to make changes in the area of crowd control.”

At the same time, Best has sought to strike a balance between sympathizing with protesters and supporting the police officers. Before every public appearance she’s recognized Floyd. As a Black woman, Best said she herself has been the target of racism, only to find herself accused of perpetuating the same.

“We find ourselves in this really surreal position where those of us who really want to have fairness and freedom and justice, people like myself, are now the target of complaints of brutality,” she said.

At their core, the mass demonstrations across the country in recent weeks are about issues of racism and disparities in law enforcement. Seattle is no exception. Past surveys show Black communities are much less likely to believe police treat people equally based on their race.

As recently as December 2019, 30% of Seattle police stops were of Black people, who comprise less than 7% of the population. But police were less likely to find a weapon than when they stopped white people. Additionally, 32% of all uses of force and 26% of instances Seattle officers pointed their weapons were against Black people.

“We don’t necessarily know what it means to dismantle a police department,” said Morales. “But we have to commit as policymakers to asking ourselves some really important questions. What does a world with no police look like? How do we redefine safety to focus on the well being of our neighbors? And what does it mean to invest in black lives?”