Debate over policing in Seattle continues after years of federal oversight

Some believe the city is ready to handle its own police department, while protesters disagree. 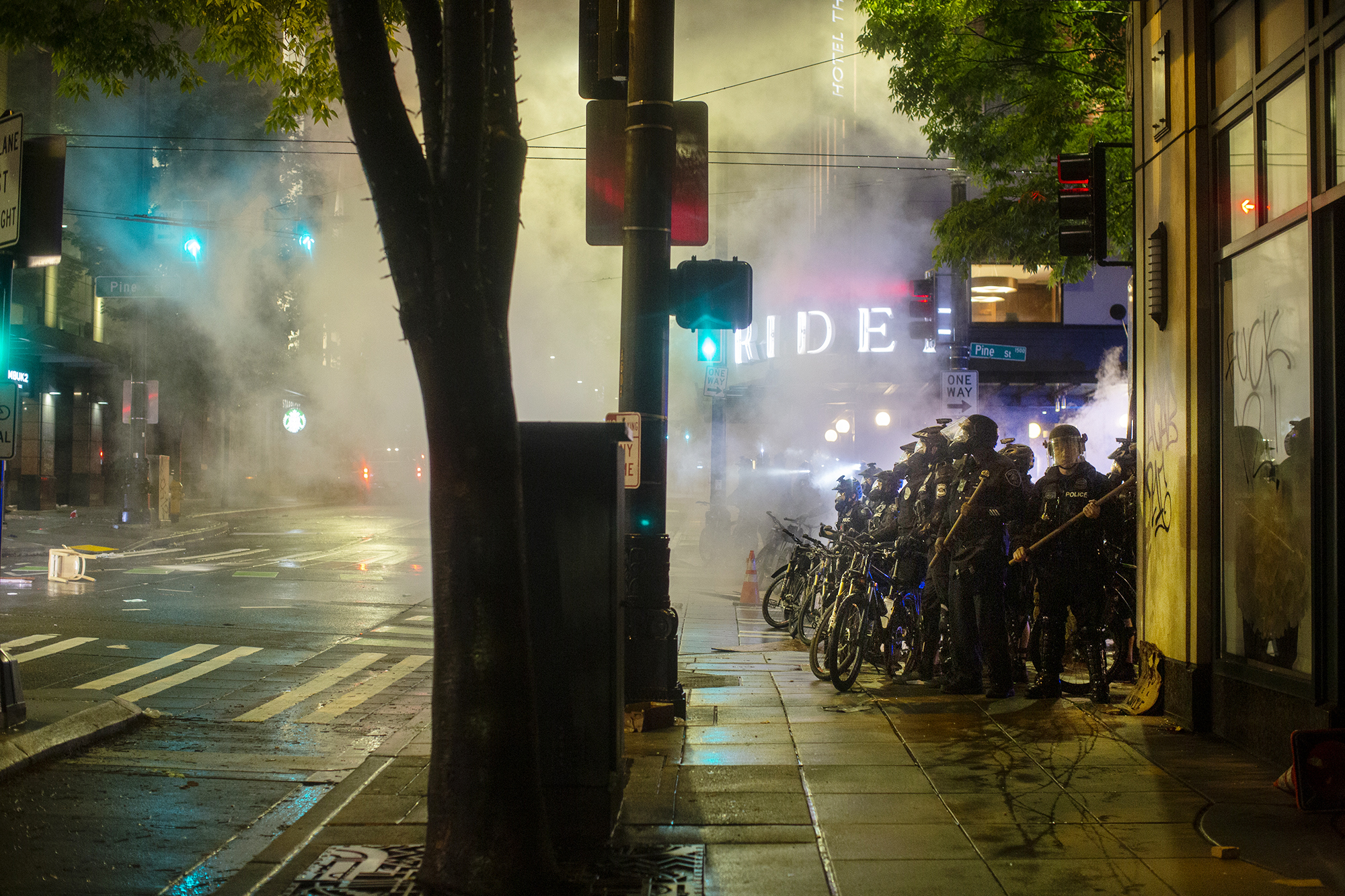 Seattle police officers set up a barricade and block off access to Pine Street, May 30, 2020, after using tear gas and flashbangs to disperse a crowd of protesters along the street. (Shaminder Dulai/Crosscut)

Two weeks before George Floyd was killed by a Minneapolis police officer — and a little more than two weeks before protests began to boil in cities across the country — Seattle asked a federal judge to terminate the bulk of his long-standing oversight of its police department.

That request, which would formalize a wind-down process that began in 2018, has now become a point of tension within the community and among some elected officials at a time when tension is easy to find. Beyond the legalese of the court filings, dating back to a 2011 report on excessive force by Seattle police officers, the future of the federal government’s involvement — via an agreement known as a consent decree — is also seen as a question of the city’s ability to police its own police department.

“Working with Trump’s justice department to get rid of the consent decree, you start to wonder whose side they’re on and how serious they are about change,” said Kamau Chege, a community organizer and managing director at Washington Census Alliance, a coalition of 93 tribes and community organizations of color.

Seattle City Council President Lorena González acknowledged the concern. “I think that what we’re hearing from community members who are negatively impacted by policing, about what is going to happen when the consent decree goes away, is real,” she said. “Those concerns have to be addressed whether we have a consent decree or not.”

But beyond the consent decree are questions of the roots of reform: What are the origins of lasting change and where should the anger of the city’s protests find a home?

For Lisa Daugaard, who spent years working within the structure of the consent decree as co-chair of the Community Police Commission, it’s not in federal court.

“The consent decree is a distraction,” she said. “People need to stop waiting for the judge to come and save us. It’s never happened and it’s not going to happen.”

At the urging of the American Civil Liberties Union and a host of other community organizations, the DOJ launched an investigation into the Seattle Police Department in the wake of the 2010 killing of John T. Williams — a Native woodcarver shot in the back by an officer while he was crossing the street.

The investigation — led by then U.S. Attorney and now Mayor Jenny Durkan — found the department used an unconstitutional level of force and showed patterns of bias.

“It was clear to us in 2010 that we would not be able to prevail without federal involvement and oversight,” said Diane Narasaki, retired director of the Asian Counseling and Referral Service and an original member of the Community Police Commission. “And frankly, we were glad that the Department of Justice did come to Seattle, did investigate, and the finding did reflect what community members have seen all these years.”

In response, the city and the federal government agreed to a series of benchmarks the department must hit when it comes to use of force, training, data collection, crisis intervention and more.

In 2018, U.S. District Judge James Robart concluded the city had hit those marks and declared Seattle to have met its obligations under the consent decree, triggering a two-year cool-down period. In recent court filings, the city has called SPD a “transformed organization,” pointing to lowered levels of force.

But there was a wrinkle. A new contract with the Seattle Police Officers Guild — which represents rank-and-file officers in the department — altered and, for some, rolled back new police accountability measures that the Seattle City Council had approved in 2018, including the review process through which officers can appeal discipline.

Robart chastised the city over the new contract, demanding it offer a path toward fixing what he viewed as the weakened accountability measures; otherwise, he said, he would have to stick around for years to come.

At the same time, he left open the possibility that Seattle could be released from monitoring on all other aspects of the consent decree. With its most recent filing, the city has formally requested he take such a step, while promising it would continue its work on accountability.

On Friday, Durkan downplayed the significance of the filing. “We are simply seeking to terminate that sustainment plan, but made very clear to the court that we would continue to address the issues raised by the court,” she said.

Council President González agreed Saturday that it’s time for the city to move on from the bulk of the consent decree, expressing confidence in the increase in civilian oversight that’s come in recent years. “I think we have done 10 years of really hard work, and it’s time for the training wheels to come off and for us to do as much of this work alone as we can,” she said.

Some of her colleagues disagree, especially following the weekend's protests, which elicited over 12,000 complaints to the Seattle Office of Police Accountability.

On Monday, Councilmembers Kshama Sawant and Tammy Morales — the two most left-leaning members of the body — argued the city should rescind its latest filing.

“That consent decree is there for good reason,” Sawant said.

Andre Taylor, founder of Not This Time and whose brother was killed by police in 2016, called for “rejecting this idea that the Seattle Police Department wants to get out from underneath the consent decree.” That the unions may chafe at the oversight signals to Taylor that it must be worth something.

“If that's one of those tools, then put that on there,” he said. “It might not be the greatest tool, it might not operate like we want it to operate, but if [the unions] don't like it so much and are fighting against it so much, there's something that the community doesn't know why they feel that way.”

For Daugaard, however, the court’s presence only serves to take pressure off of elected officials.

“The court didn’t stop the purge of SPD reform leaders by Mayor [Ed] Murray in 2014,” she said. “The court didn’t step in when peaceful Black Lives Matter protesters were kettled, terrorized and arrested a year later. The court didn’t intervene to protect the 2017 accountability ordinance when it was gutted by the 2018 SPOG [police union] contract. The court didn’t require the force review process to produce recommendations for policy changes after deaths that honorable SPD leaders themselves felt were avoidable.”

“Instead of looking directly to city officials for accountability, activists and advocates get distracted hoping the court will weigh in,” she continued. “It’s not going to happen.”

Repeated audits of the Seattle Police Department have found that officers are using less force than they used to — and, when they do use force, it’s at lower levels. In 2018, force was used in just one-quarter of one percent of incidents to which they responded. Evidence suggests officers are more often de-escalating crisis situations than there were in 2011.

But racial disparities remain. Thirty-two percent of uses of force in 2018 were against Black men, despite African Americans comprising just 6% of the city’s population. People of color generally are more likely to be searched by a Seattle police officer and yet less likely to have weapons in those searches than white people.

“When it comes to communities of color, no, I do not believe they are an improved department,” said Jackie Vaughn, an anti-racist organizer and executive director of Surge Reproductive Justice. Vaughn advocates for disinvesting from police and pressuring elected officials from within the community, she said. In the meantime, “while we build to that, we have a tool right now and that is the consent decree,” she said.

Chege, who is Black and lives on Capitol Hill, said the large East Precinct in the heart of the neighborhood represents safety for many. “That is not my feeling of walking by that precinct,” he said. “I do not feel safer. If anything it’s a little reminder that if there was an Amy Cooper situation at Cal Anderson [Park],” the police would be quick to respond.

The next milestone is likely to be contract negotiations with the city’s two police unions. Durkan and the city have promised to codify strong accountability measures in their talks with the unions, a message Durkan hopes will satisfy the judge.

Negotiations with both groups have been delayed. Bargaining with the rank-and-file union has not yet begun, despite earlier promises they would start “no later than April 2020.” González said she’s hopeful those talks can produce greater accountability.

Narasaki, the retired director of the Asian Counseling and Referral Service, said she was “immensely disappointed and outraged” by the results of the last police contract. In the wake of the protests — combined with the COVID-19 pandemic — she wants to see the status quo upended.

“We need to create a new normal,” she said. “We need to create a normal which addresses structural racism, which is showing up in the contours of this pandemic, disproportionately affecting low income and people of color — the same people who are disproportionately affected by negative policing. These things are not separate; they grow out of the same root.”