Rehiring and paying employees are among big problems on the horizon for many businesses. 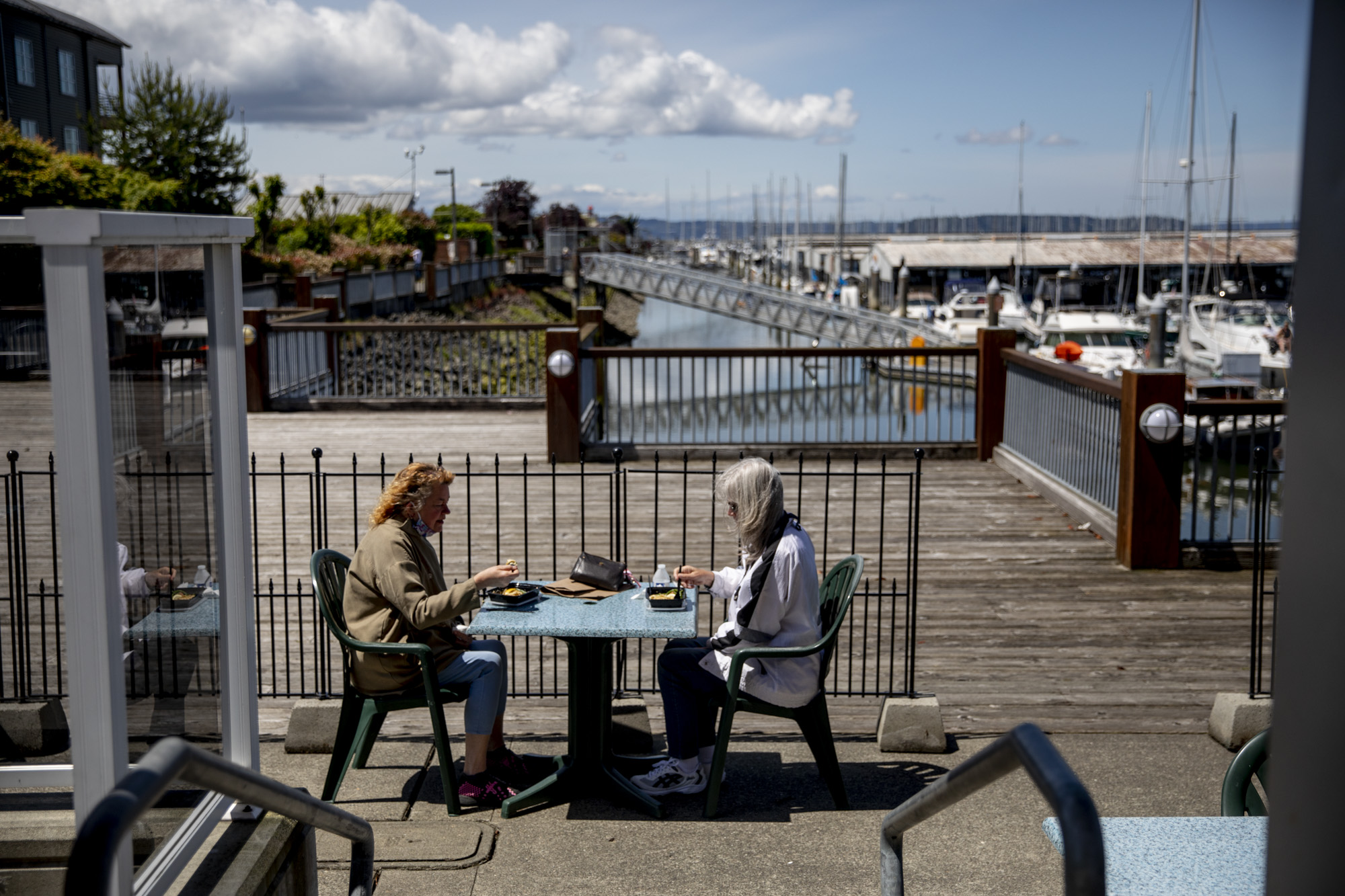 Leann Durnil, left, and Mary Buck, both of Everett, have their takeout lunch together on the patio of Lombardi's Italian Restaurant in Everett on June 3, 2020. (Dorothy Edwards/Crosscut)

Kerri Lonergan-Dreke, like so many business owners, is desperate to reopen. All three locations of her local Italian restaurant chain, Lombardi’s, have been practically closed since the state-ordered shutdowns began in March.

While Lombardi's continues to offer takeout and has received a federal Paycheck Protection Program (PPP) loan to help pay the employees Lonergan-Dreke has been able to keep, the money in the cash register is not enough to sustain her businesses or bring back employees she had to temporarily lay off.

In the meantime, Lonergan-Dreke has spent countless hours helping those laid off workers apply for unemployment, sending letters and checking in with them over the phone.

Sometimes it has seemed futile, as many of those laid of have struggled to get their benefits. One such employee, Jackie Cooke, was erroneously rejected from unemployment multiple times before finally receiving it — and recently has had payments halted once again.

“That has been horrendous,” Longergan-Dreke said. The problems with unemployment, combined with record unemployment rates in Washington, give her a particularly alarming incentive to reopen.

Like many small business owners, Longergan-Dreke is eager to put her workers back on her payroll, but at the same time she wonders how she can be sure she can afford to keep them.

”Why would we want to take someone off unemployment, have them receive PPP money and then in two months lay them off so they have to go through that nightmare again?” she said.

The state-ordered shutdowns will inevitably change what business looks like after reopening. That transformation has already begun. The Main Street Alliance reports a quarter of the nation’s small businesses are in danger of permanent closure in the next five months.

“This is an extinction-level event for small businesses,” said Amanda Ballantyne, the small business network’s national director. She cited a failure in federal policy to create long-term solutions as one reason businesses are in this  predicament; PPP loans, for example, provide funding only for eight weeks.

Tiffany Turner, owner of the regional hotel, inn and restaurant chain Adrift Hospitality, said that severely impacted businesses like hers will require long-term solutions to recover. Although some locations she owns were able to open recently, like one in Pacific County and another in Oregon, eathey aren’t anywhere near normal capacity and will likely be unable to reach those levels with current restrictions in place for the foreseeable future.

“This is not an eight-week issue in our economy,” she said. “There needs to be a much more certain fix.”

Since the coronavirus outbreak began, lawmakers have attempted to respond to the growing need for financial aid to businesses. In late March, the federal CARES Act established a pool of loans for businesses and tax credits, deferrals and deductions that would allow employers to hold on to the money they made.

But those solutions were limited in scope. Now, with reopening dates in sight, Congress is considering a number of new proposals that would help businesses nationwide plan beyond a few weeks or months in recovery.

Washington’s representatives and senators are focused on getting businesses the money they need to rehire and keep their employees, which would also would allow the workers to regain health insurance. Keeping those workers requires a stable source of funds, since employers need to know that they’ll be able to pay them, and a lot of flexibility as businesses work to rehire staff in batches.

Some have focused on reforming the PPP loan program after seeing inequities in its distribution. U.S. Rep. Suzan DelBene, D-Medina, wants to expand the CARES Act’s payroll tax credit.

That provision was designed to encourage employers to keep workers on their payroll by offering a refundable tax credit equal to 50% of up to $10,000 of an employee’s wages, so $5,000 per person. But originally, employers couldn’t get the tax credit alongside a PPP loan. DelBene’s proposal would change that, upping the credit to equal 80% of $15,000, allowing employers to receive up to $45,000 a year alongside other loans. DelBene says it’s a reliable solution, especially because uses preexisting relationships between the Internal Revenue Service and businesses.

U.S. Rep. Pramila Jayapal, D-Seattle, has proposed the Paycheck Recovery Act, which would cover employee salaries up to $90,000, allowing employers to keep workers on a payroll even if the business hasn't reopened.

The act follows the lead of relief legislation in countries like South Korea and the United Kingdom, which are giving businesses direct governmental support rather than requiring them to go through banks, as loans through the PPP do. Chris Evans, Jayapal’s communications director, said grants under the act could be renewed beyond the year’s end, possibly giving businesses more certainty in the future.

The Woodland Park Zoo, which spends $2.5 million each month on upkeep and has received a PPP loan, has voiced support for Jayapal’s initiative. Its CEO, Alejandro Grajal, said there’s little room to cut back on costs as many employees provide necessary care for the zoo’s animals. He’s concerned about the budget going into next year. Regardless of any help the zoo has received or will receive, 2021 is looking “very scary financially,” he said, as the zoo has used savings from previous years to stay afloat.

“We’re burning through cash,” he said. “The zoo will have to resize their budget in 2021, no matter what.”

In other relief legislation, U.S. Rep. Denny Heck, D-Olympia, has proposed $100 billion in emergency rental assistance.  U.S. Rep. Derek Kilmer, D-Gig Harbor, is co-sponsoring a bill that would give Americans a job skills training credit of $4,000.

A reopening date for businesses has been elusive and frequently delayed since the pandemic began, but it now looks like it may soon become a reality for parts of Washington. Some counties have already allowed certain businesses to reopen with restrictions — some of Turner’s Adrift Hospitality locations have been approved to start receiving a limited number of guests — but others, like two of Lonergan-Dreke’s Italian restaurants in Snohomish County, are still on hold.

In the meantime, Cooke, the laid-off Lombardi's employee, has been able to snag a few hours at the restaurant to assist with takeout, although she still hopes to receive the partial unemployment benefits she’s eligible for. She said she’s taking whatever she can get.

Lonergan-Dreke said that she’s been ready to reopen Lombardi’s since receiving a guideline for health protocols from the Washington Department of Health in mid-May. She’s anxious to use up her PPP loan as well; since she received it in mid-April, her time to use it runs out sometime in June unless Congress decides to expand the number of weeks beyond the eight that she’s allowed to use those funds.

Snohomish County has applied for approval to move on to Phase 2 of reopening and expects to hear back soon from state government. As they wait, Lonergan-Dreke and her staff have started updating their website to reflect new safety protocols at Lombardi’s and continue to prepare for a reopening day.

With small businesses around the state closing permanently due to lost revenue, Lonergan-Dreke is hoping for good news someday soon.

“It’s just carnage what’s going on with small business,” she said. “Every day that we’re forced to stay closed is another day that a small business dies.”