Labor council to Seattle police union: Address racism or get out 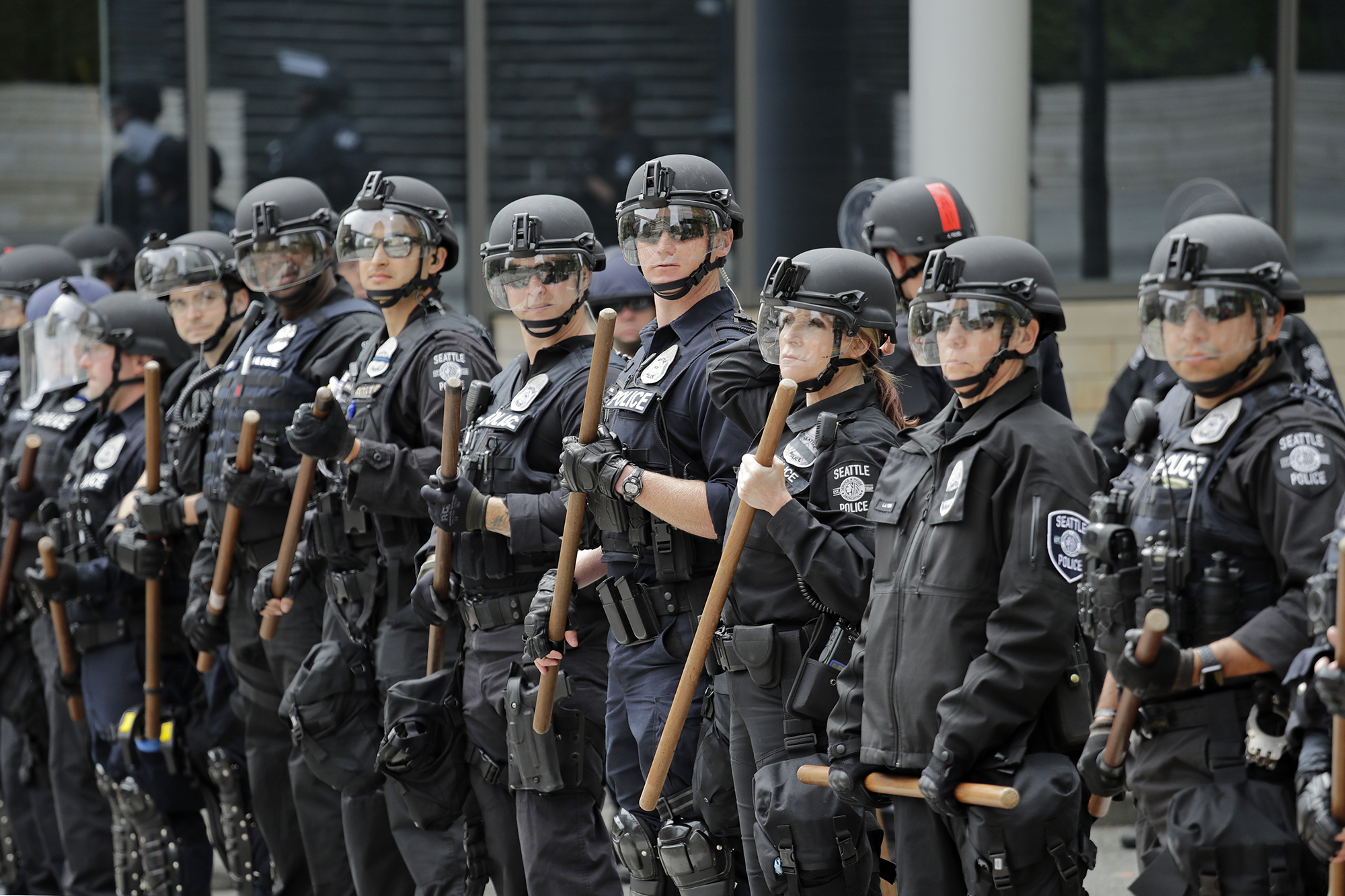 A line of police officers surrounding City Hall on June 3, 2020, in Seattle look toward demonstrators following protests over the death of George Floyd, an African American who died on May 25 after a white Minneapolis police officer pressed a knee into his neck for several minutes even after he stopped moving and pleading for air. (Elaine Thompson/AP)

The largest labor coalition in King County is giving the Seattle Police Officers Guild an ultimatum: acknowledge and address racism in law enforcement and in their union or risk being kicked out of the group.

In a vote Thursday, executive members of the King County Labor Coalition — a sort of union of unions — passed a resolution laying out tasks for the police guild, which represents over 1,000 rank-and-file officers.

SPOG must state that racism is an issue in law enforcement and within its own organization. The union must participate in workgroups focused on addressing racism in the union. It must commit to police contracts that do not evade accountability. And there must be consequences when professional standards are not followed and harm is done.

Jane Hopkins, executive vice president of SEIU 1199, said she wants to hear the head of the union, Mike Solan, say, “Black lives matter,” and to mean it.

The labor council is basically giving the police union one last opportunity to reform itself. SPOG has until June 17 to meet these demands, or the council will vote on whether to throw it out of the organization.

The resolution, which was brought forward by health workers' SEIU1199 and grocery workers' UFCW 21, also calls on Mayor Jenny Durkan to move swiftly and prioritize strong police accountability in the next round of labor negotiations with the union and to reconsider investments in law enforcement. It calls on City Attorney Pete Holmes to not prosecute protesters.

The resolution is a dramatic turnaround for the labor council, which welcomed the police union into its ranks in late 2014 and had fought on its behalf ever since. Labor council representatives even hosted a press conference in 2018, calling on the Seattle City Council to ratify a new contract with the police union.

But things have changed, said Nicole Grant, executive treasurer-secretary of the labor council. While she once believed bringing police into the labor movement would foster community engagement and reflection on racism, she now has her doubts.

“After what we’ve all experienced as a city over the last couple of weeks, do I feel as confident in that vision of everybody coming together and meeting at the level of our humanity and really changing things?” she said. “As beautiful as that vision is, I find myself clinging to it less. I have an obligation to hear what community leaders are saying to the labor movement and to hear what Black union members are saying to the labor council and to be accountable to them and their vision.”

Protests have roiled Seattle for nearly a week, thrusting the issue of race and policing into the public narrative in a way not seen since at least the Ferguson, Missouri, protests of 2014, and perhaps never.

The pressure is already having an effect. Seattle City Attorney Pete Holmes said yesterday he would not ask to remove federal oversight of the Seattle Police Department.

As the protests have swelled, so too have calls for the labor council to remove SPOG from its ranks.

“So long as they’re a part of the Martin Luther King County Labor Council, you will always have to be at SPOG’s beck and call,” Nikkita Oliver, a community leader and former candidate for mayor, said to a large crowd of protesters Wednesday. “We ask you to expel them.”

The Highline Education Association recently voted to call for SPOG’s ouster from the labor council. A petition from union members of color has garnered over 500 signatures and was delivered to the labor council Tuesday, said Isaura Jimenéz Guerra, a White Center teacher and union member, who helped start the petition.

Police unions — which lean more conservative — have long had a precarious relationship with the much more progressive labor community. Calls to separate the two are not new.

“These tensions are not new and exist everywhere in the country,” said retired Judge Anne Levinson, who acted as auditor of the Seattle Police Department’s accountability system for years.

But as eyes turn toward police accountability, the role of police contracts has received new scrutiny and calls to disband their unions have increased.

“People are right to wonder why the police union views its role as protecting officers who’ve engaged in misconduct rather than seeing their role as helping to ensure that the public is treated with dignity, respect and fairness,” Levinson said. “That’s what the rest of the labor movement is about: how to improve the lives of the broadest cross-section of community as possible.”

In Seattle, the relationship between police and the labor community was uncommonly close. The police guild joined in 2014 on the urging of its former president, Ron Smith, and the ties grew closer when Kevin Stuckey, who is Black, took over as president.

Stuckey made a show of advocating for labor causes outside of his own, including on behalf of new scheduling laws before the Seattle City Council and for nurses striking outside of Swedish hospital.

In turn, he and his union received strong backing from the labor council in favor of their new contract.

Stuckey, however, was swept out of his position earlier this year, losing his seat in a landslide to the more hardline Mike Solan, who is white. Grant said she’s had only minimal contact with Solan since. Solan did not respond to a request for comment.

Lisa Daugaard, executive director of the Public Defender Association, said there was a hopeful period where it looked like the cooperation was producing good results.

“But by 2018 that tentative relationship was in the trash heap,” she said. “It seemed as though SPOG suddenly devalued the relationship with the civil rights community and retreated to a more traditional view of their own self-interest. It was sad to see the window for partnership close after so much effort.”

Hopkins of SEIU 1199, which represents medical health professionals, said she too was hopeful that the cooperation could bring the police union along toward self-reflection about racism and relationships with the community. But she’s been dissatisfied, a feeling that has crystalized for her in the past week. She’s hopeful the ultimatum will produce results, but she needs to be convinced.

“There needs to be a true change,” said Hopkins, who is Black. “The way to do that is actually accepting that ‘yes, we are a racist organization and we are going to do what we can to make sure we dismantle that in our organization.’ ”

SPOG was slated to begin new negotiations with the city in April, although they have delayed that start. As Seattle and the police department continue to limp forward under the eyes of a federal judge, the results of that bargaining have taken on new significance. If the next contract doesn’t include strong enough accountability measures, neither the public nor the judge will be pleased.

Looking back on the labor council’s advocacy for SPOG’s contract, Grant said she has second thoughts — even regret.

by / June 16
Inside Crosscut