Mayor Jenny Durkan is not the trailblazer Seattle needs

Our city deserves a leader who can see beyond our current reality into uncharted territory. 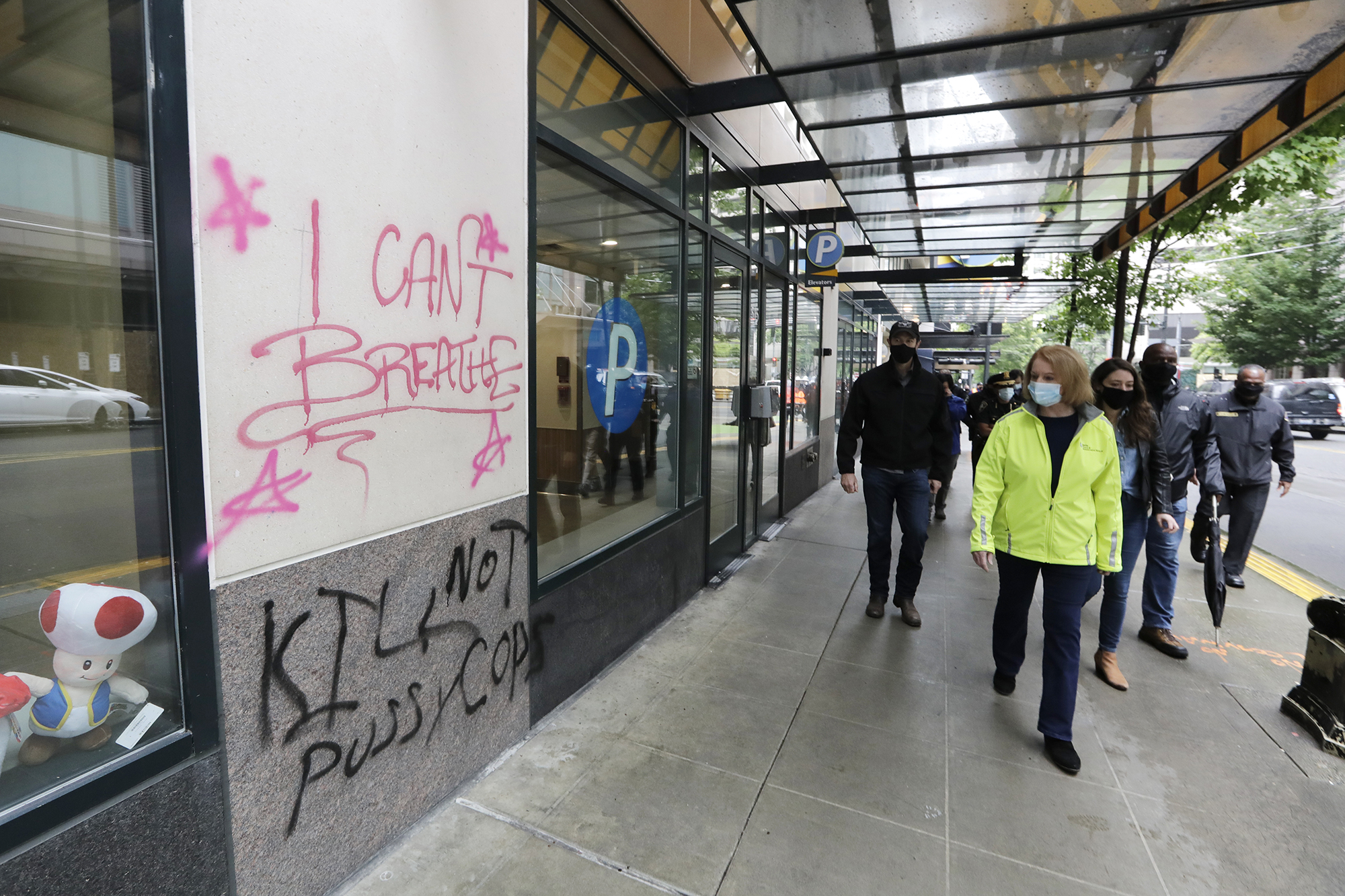 Seattle Mayor Jenny Durkan walks past graffiti on store windows Sunday, May 31, 2020, in downtown Seattle, following protests the night before over the death of George Floyd. (Elaine Thompson/AP)

On Wednesday, June 3, Seattle Mayor Jenny Durkan addressed a large group of protesters. Did you notice the ashen look on her face as she walked through the crowd and up the steps of City Hall? It was the look of both shock and horror when the valedictorian of a small high school arrives at Harvard, the star of a community theater sees their first Broadway performance, a congregant discovers their pastor is being arrested for rape, or a spouse learns their partner has another family. It is cognitive dissonance mixed with awe.

That moment comes alive when someone realizes their reality is a very small bubble within a much larger context and they have a decision to make: open to the new reality or run from it in fear. The moment is fraught with incalculable possibility and danger. It is an instant when the universe holds up a giant mirror to one’s emotional, spiritual, philosophical, intellectual and political life and screams, You are not who you think you are! I believe, in that moment, Durkan saw how little she and those in her circles of influence understand the world they inhabit. It’s an experience currently shared by millions of people.

I suspect that when Durkan looks into that mirror, she expects to see someone who has worked hard and stayed focused on fully realizing her potential. She wants to see a winner. She expects someone surrounded by advisers who share her values and priorities and have succeeded because of it. She envisages an excellent mind with strong opinions. So why are so many people angry with her? Why won’t they follow her lead?

And therein lies the key — follow her lead to where?

My father’s parents and grandparents were Black Texas cowboys. On their ranch, trailblazer was a verb, not a noun. It described someone tasked with going ahead of the main body of cattle and cowboys to scope out the trail ahead. Their job was to understand the route, identify and possibly remove obstacles, negotiate property access, find sources of water or supplies, leave markers along the way guiding those who would come behind and, where required, get all the way to the day’s goal and return back to the drive in time to report their findings and set the next goal. Unlike a cattle drive’s boss, tasked with day-to-day management of logistics, resources and personnel, trailblazers had to see beyond the drive’s current reality into multiple future possibilities. They had to hold an informed vision of where the drive could go and be willing to risk their own safety to travel into uncharted territory. By the time the drive arrived at a place of danger, the trailblazer would have been there before and calculated the best ways to navigate it.

At this moment in our local and national history, we need the wisdom and insight of trailblazers. We need leaders who have proven themselves as visionary, have explored social structures beyond the limits of our current norms. We need those who understand the dangers in the pathways ahead and are willing and equipped to lead us through them. We need leaders willing to resist the temptation to follow the well-traveled routes because we all now know they will lead us right back to this fatal status quo.

Those leaders exist. Some formed the coalition that made our region among the first to adopt a decent (though still not livable) minimum wage. Some took us to the forefront of policy to protect our newly immigrated neighbors. Some led the fight to ensure the bonds of marriage were available to all.

There are people among us who have a vision of society not centered on humiliation or diminishment, a society instead where those who help and empower are valued over those who hoard and destroy. There are those who have long envisioned the transitions necessary to navigate this dangerous space, who know how we need to deform and reform every aspect of our society. Like children who become astrophysicists to explore the stars of their dreams, there are among us people who have spent their lives envisioning and exploring the pathways to a society where racism, classism, sexism or homophobia would be unthinkable. Isn’t it time we followed their lead?

Bertha Landes, Seattle’s first female mayor, is celebrated not just because of her gender, but because she was fearless in doing something mayors before and after her wouldn’t do: Stand up to the corruption of the police department. While she excised financial corruption in its ranks, the moral corruption, rooted in the hunger to dominate, clearly endures. As we have seen the past two weeks, those empowered to protect and serve the community have become its abusers, using violence to dominate rather than common sense and compassion.

Durkan’s vision is bound by her success at navigating where we have already been. She has exhibited timidity in moving the obstacles put in her way by our economic and political behemoths, whose success is contingent on the status quo. Had she and Seattle Police Chief Carmen Best taken early, decisive steps — including immediately announcing the name of the officer who, on May 30, allegedly pepper sprayed a child and firing him or her on the spot — without using the amoral language of politispeak to shield themselves, they would have gained a measure of respect. Instead we hear about the importance of protecting those who are fully armored from those wearing T-shirts and sneakers.

So here we are, standing at a dangerous moment in history. While Durkan has shown herself to be a very able bureaucrat, there is nothing that shows her to be a trailblazer, to indicate she has seen beyond the current moment’s danger into future possibilities. Nothing to indicate she intimately understands the pitfalls ahead.

Her timidity in dealing with the police department reveals quite the opposite. Allowing the rank and file to use passive-aggressive tactics, like momentarily replacing tear gas with pepper spray bombs, exposes her inability to see how they, just as a 5-year-old child told not to throw a rock throws dirt instead, are challenging her authority. Instead of dealing with the disrespect the police leadership shows toward her, Best and the public, Durkan responds with another set of supposed guidelines, which they, like the 5-year old, will undoubtedly promptly ignore.

Jenny Durkan needs to step aside, not because there is something innately wrong with her, but because there is nothing in her history that shows she is a trailblazer whose skill, experience, knowledge and wisdom can innovate the way forward.