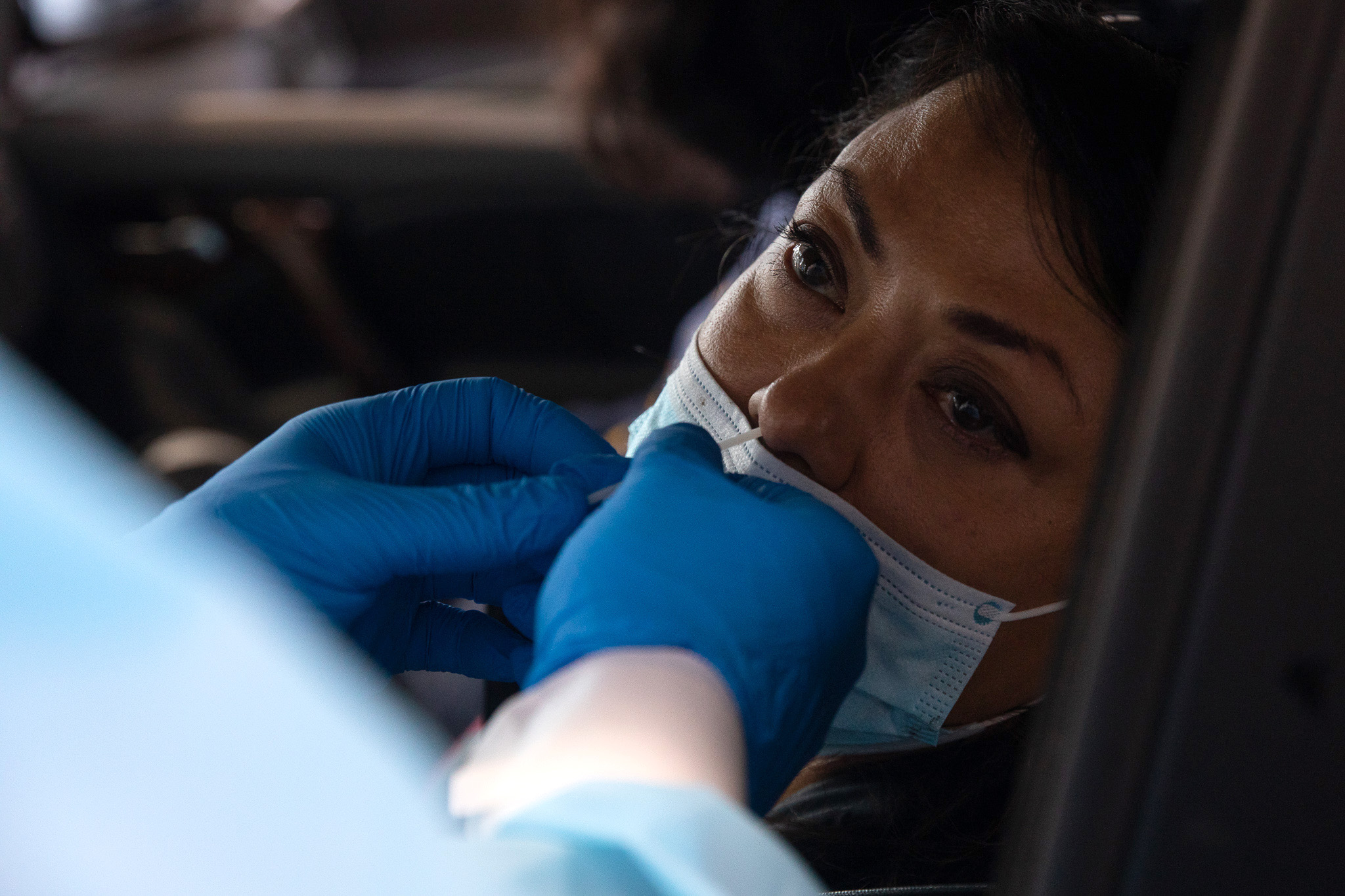 Christi Cruz, a Seattle-area school teacher, receives a nasopharyngeal swab test at a drive-up COVID-19 testing facility at what had been a state vehicle emission testing facility in North Seattle, June 12, 2020. "As long as it doesn't feel like giving birth, I think I'll be OK," says Cruz in the moments before the test was administered. "I have marched several times and wore a mask each time, trying to keep a safe distance from others, and I'm also very diligent about hand washing." (Matt M. McKnight/Crosscut)

“Yep, that’s the back of your throat.”

A cheerful firefighter tells me this as he pushes a COVID-19 test swab further up my nose than anything is supposed to go. He looks at me kindly from behind the face shield as my eyes fill with water.

Two deep breaths and it’s over. I return a warm, weak smile; wipe the tears and make sure to grab the piece of paper on the seat beside me that has the QR code for my result. The test swab will leave this retrofitted vehicle emissions testing site on Aurora Avenue, get analyzed by the University of Washington’s Virology Lab and come back negative 17 hours later, while I sleep.

I chose to get tested because on June 3, I walked around the edge of the crowd at 11th Avenue and Pine Street on Capitol Hill, observing the scene while barricades still separated police and protesters. The call-and-response chant “Say his name: George Floyd!” by hundreds of voices filled the air, and a masked woman offered hand sanitizer to every passerby. There were as many people as I’d seen in one place in months, and I wondered if I’d been exposed to COVID-19.

I wasn’t alone. The next day, the city of Seattle announced that it would team up with the Seattle Fire Department and the University of Washington to open two free drive-thru COVID-19 testing sites, one on Aurora Avenue in North Seattle and the other in SoDo. Seattle Mayor Jenny Durkan issued an emergency directive to use the former vehicle emissions testing sites for this purpose and encouraged anyone who had attended protests to get tested. The SoDo location started swabbing noses on June 5 and the Aurora location opened on June 8.

Since then, the two firefighter-staffed sites have administered more than 3,500 COVID-19 tests, and the preliminary results indicate that there has been little transmission of the coronavirus among protesters. Protests against police brutality began in earnest in Seattle on May 30, and because symptoms of COVID-19 may not show up for two weeks following exposure, it’s still too soon to know the full extent of their effect on COVID-19 rates in King County.

But results have been promising enough so far that the city of Seattle recently updated its guidelines on who should seek testing and now recommends it primarily for people who are experiencing symptoms. The absence of a dramatic spike in new cases was one factor that led the King County Board of Health to vote in favor of applying to enter Phase 2 of Washington's "Safe Start" plan on the evening of June 15.

“Results are in from UW Medicine and out of 3,000 tests fewer than 1% were positive,” the City of Seattle's COVID-19 website now reads. On June 14, an additional line appeared below this one, reading, "To our knowledge and based on volunteered information, there is no evidence so far of people testing positive for COVID-19 from attending protests in Seattle." By Monday, June 15, that line had vanished. Kamaria Hightower, deputy communications director for the Office of Mayor Jenny Durkan, said that this wording was removed because one person tested positive over the weekend who reported attending a large gathering, presumably a protest.

Amelia Fujikawa attended the first protest in Seattle following George Floyd’s death, on May 30, and hasn’t been back to a demonstration since. Although she wanted to go back out, she began to feel achy the next week, and initially wasn’t sure whether to blame stress or COVID-19. She booked an appointment for Tuesday at the Aurora testing site.

Fujikawa describes the firefighter who administered her test as being patient, despite her fear of the swab. Fujikawa had to have her nose cauterized several years ago to help reduce the frequency of the chronic nosebleeds she experienced as a child.

“He had kitten whiskers drawn on his mask, which was really cute,” she says. “I felt like a kid the whole time. I thought that my nose was going to start bleeding uncontrollably.”

After the test, which came back negative, she said it took a while before she could close her eyes and think of anything other than the sensation of the swab. She said that even though the COVID-19 test wasn’t exactly painful, the discomfort has made her more cautious about returning to protests, where she might be exposed to the virus and need to get tested again.

“I’m more curious about antibody tests now, because it would be nice to know for sure that you’re good and could go out in the world and be immune,” she says.

At the Aurora testing site, Seattle Fire Department Lt. Brian Wallace mans the easternmost of the five bays, blue painter’s tape cuffing his nitrile gloves to his personal protective equipment gown and keeping the sleeves from billowing. A couple pull up in a gray sedan and Wallace asks if they’ve been having symptoms.

“No, we just went to the protests,” they volunteer.

Wallace nods, prepares the swab and warns the couple that the test will be uncomfortable, but doesn’t really hurt. He tells them to resist the urge to grab his arm, and if they must sneeze to please turn into the vehicle.

Wallace, along with Seattle Fire Chief Harold Scoggins, has been leading the effort to train Seattle’s first responders to administer COVID-19 tests since March. At that point, he helped create the first site in the country where paramedics and emergency medical technicians could administer the test to other first responders. Then, in mid-April, the fire department began sending small teams to local long-term care facilities to test elderly residents.

After that, Wallace says, there began to be “real possibility for the city to do its own long-term testing run by firefighter-paramedics. I got tasked with thinking about how to really make this grow to a scale that we could do some serious testing in Washington.”

"The rate of infection has been so low that the city is shifting its message about how aggressively people who were at the protests should get tested," Wallace says.

The firefighters administering tests are also all either emergency medical technicians or paramedics, and the two new sites together add 1,600-test capacity to a system that had already been conducting about 2,000 tests per day. Patty Hayes, the director of Public Health — Seattle & King County, said at a press conference that the county’s current goal is to test 5,000 people per day for the coronavirus.

Currently, 18 places in King County, including the two new sites, offer free testing regardless of insurance or citizenship status. Most of these locations require access to a personal vehicle, but the Downtown Public Health Center and the Rainier Beach testing site, run by Neighborcare Health, offer COVID-19 tests for people who walk, bike or take public transit there.

Under both state and federal law, all COVID-19 testing must be free for anyone, and in Washington state, insurance companies can’t charge co-pays for testing. Some testing locations in the county do require insurance, and the county has created an interactive map showing the location of every testing site, color-coded by whether insurance is required. Public Health still recommends that those who regularly visit a doctor or primary care practitioner get a coronavirus test through them.

Raymond Sánchez, a graduate student at the University of Washington who attended three protests last week, said he initially put off going to the demonstrations because of concerns over the pandemic. Eventually, feeling that he needed to show solidarity in person, Sánchez decided to go with a mask on. Nearly everyone else he saw protesting was also wearing a mask, which helped him feel safer.

Afterwards, Sánchez got tested at the Aurora site, which he described as similar to a peaceful border crossing, with cars idling in the lanes as each person waited to have a conversation with someone who worked for the government. It was his first time getting tested for the virus.

“Now I’ll probably stay away [from protests] for a bit, because I don’t want to push my luck,” Sánchez said. “I did test negative.”

“I still worry about the spread of coronavirus,” he adds. “Obviously, protests may contribute to that, but it's just as likely that places that are opening, restaurants or bars that increase their capacity, those things will also increase the number of cases that are happening. For me, protests feel like an essential activity. Racism is also a public health issue.”