The time to abolish Seattle police was yesterday

Historical efforts to reform the city’s police department and rid it of racism have all failed. Now is the time to change the narrative. 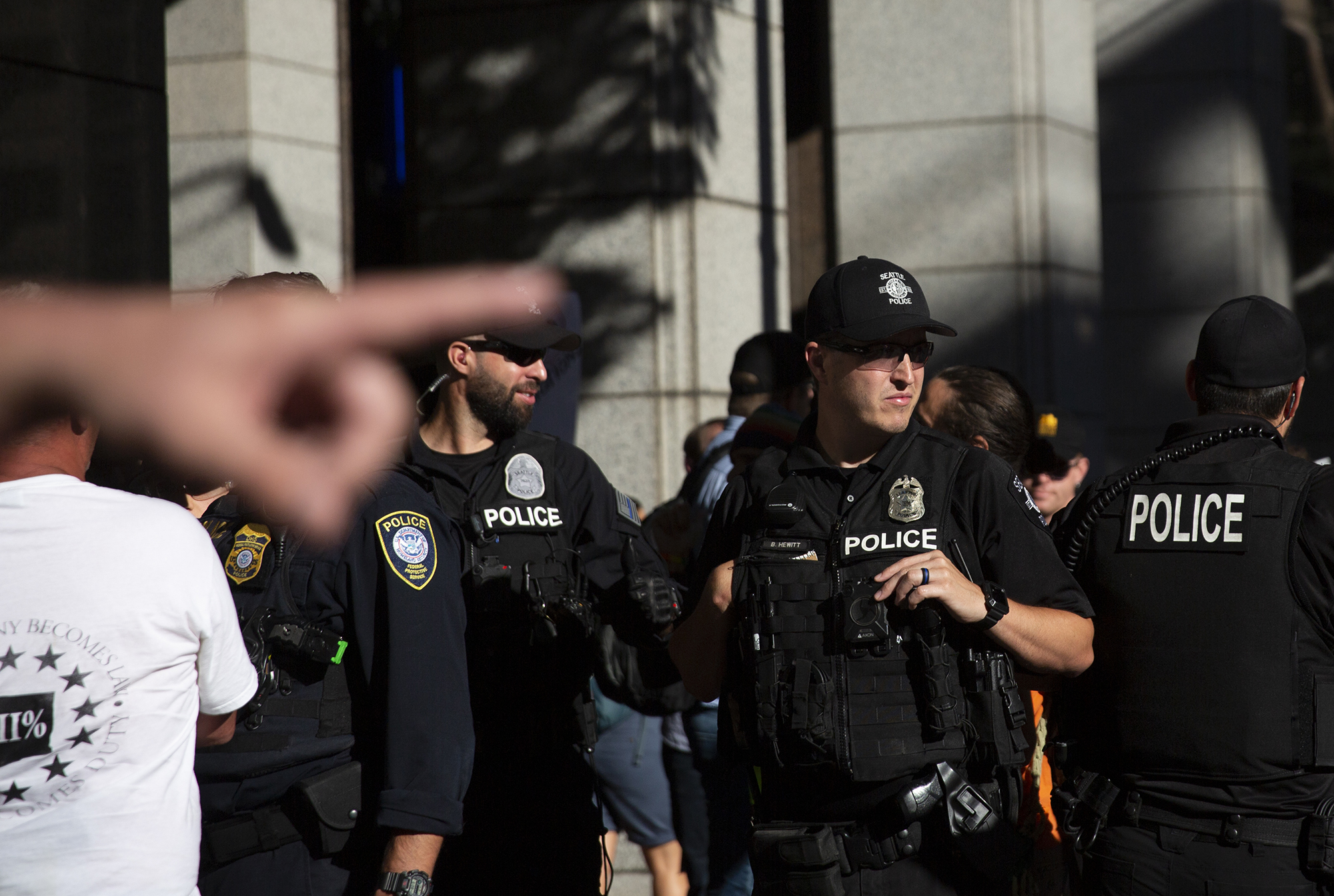 Seattle Police officers form a line separating counterprotesters during a rally outside of Washington ICE headquarters in downtown Seattle on Aug. 1, 2019. (Lindsey Wasson for Crosscut)

The annals of Seattle political history are filled with heartbreaking what-ifs, hard won progressive victories and turning points where our town failed to turn. But the history books are resoundingly clear on one point: No attempt to reform the Seattle Police Department into an anti-racist institution has ever succeeded.

Clarence Bagley’s 1916 tome History of Seattle From the Earliest Settlement to the Present Time relays that “police regulation” in Seattle began with an 1865 municipal ordinance concerning the sale and theft of — of all things — pigs. That year, Seattle’s first city council also criminalized the presence of Native Americans in the city named after a Duwamish chief, then disbanded briefly before reincorporating again in 1869.

The Seattle Police Department was officially established the same year that the council returned. It wouldn’t hire its first Black officer until a generation later, in 1890. That lone Black Seattle policeman — Isaac Evans, a former Minneapolis officer — mysteriously resigned soon after his appointment; his career a casualty, perhaps, of a racist and vindictive police force that arrested Black journalist Horace Cayton Sr. on baseless libel charges because he reported on Seattle Police corruption in 1901.

Cayton Sr. had a son, Cayton Jr. Against all odds, junior was savvy and politically connected enough to be appointed the first Black deputy King County sheriff in the 1920s and 1930s. “[Police in Seattle] were used to Negroes as suspects,” recalled Cayton Jr. in his memoir The Long Old Road. “[But] they looked at me as an unfortunate experiment that would or should fail, or at least they were not going out of their way to help me succeed.”

A little after Cayton Jr. left the force, three Seattle police officers brutally murdered 27-year-old waiter Berry Lawson in 1938, accusing him of loitering in the lobby of his own hotel. Decades before displays of Black death reduced entire lives to trending hashtags, political pressure from the NAACP and the Urban League led to the conviction of the three officers. The cops who killed Lawson each received 20-year sentences on second-degree manslaughter charges. One year later, in 1939, all three were pardoned by Washington Gov. Clarence D. Martin.

For Black servicemen emerging from the Great Depression, participation in World War II brought the promise of equal treatment for African Americans as a whole. But the post-WWII years remembered fondly by many Seattleites as a paradise of ample Boeing jobs, hydroplanes and Dick’s hamburgers were a time when the city’s Black population was still segregated into the Central Area. Until the late 1960s, Seattle north of the ship canal was a “sundown zone” where Black Seattleites would be subject to police harassment for appearing after dark.

Seattle had just one Black police officer in the 1950s and 1960s — a period where the Seattle Police Department, writes Quintard Taylor in The Forging of a Black Community, “held racist attitudes about black citizens, frequently stereotyping them as criminals.” In 1955, the Mayor’s Advisory Committee on Police Practices found that the city’s cops demonstrated patterns of racist policing against Black Seattleites. City government offered offending officers ineffectual sensitivity training and intercultural workshops.

In 1964, Seattle Mayor James Braman humiliated a group of Black Central Area youths who organized in favor of civilian review boards of local police, telling them “not one single inch of progress has been made by groups like you.” That same year, the Washington chapter of the American Civil Liberties Union petitioned the Seattle City Council for a hearing on discriminatory police practices. In response, the council passed a resolution declaring there was “no necessity for additional boards or offices to protect the public” from the Seattle police. Weeks later, two off-duty Seattle police officers killed Central Area resident Robert Reese in a Chinatown restaurant. Witnesses at the scene reported that the officers exclaimed, “Just show me any nigger in here and I’ll kill him, I’ve got a gun,” shortly before taking Reese’s life.

Continued racist policing and the indifference of the city’s politicians forced Black Seattleites to seek more radical solutions. In 1965, the Central Area Civil Rights Commission and the Seattle chapter of the Congress of Racial Equity, or CORE, organized “freedom patrols” in which unarmed community leaders policed the police by following cops on their neighborhood beats, documenting police misdeeds as a kind of “walking civilian review board.” The Seattle chapter of the Black Panther Party would later adopt the tactic.

Four decades before protesters occupied the area surrounding Seattle’s East Precinct in the area formerly known as CHAZ, Seattle’s Black Panthers grew powerful enough to turn parts of the city’s Central District into “autonomous zones” before that was even a phrase. In his memoir, My People Are Rising: Memoir of a Black Panther Party Captain, Aaron Dixon recalled that the Panthers “focused [their] attention on feeding hungry kids breakfast, offering ambulance services, free shoes and clothing, free pest control, free busing for Black Seattleites to [visit incarcerated family members], and free medical clinics.”

In response, the Seattle Police Department hired the same Oakland police chief who was responsible for cracking down on the Panthers in the Bay Area.

The lie of reform

From the founding of the city and its police department in 1869 to the formation of the Black Panther Party in 1968, what stands out in the history of Seattle’s first century is the meaninglessness of police “reform.” The inherent culture of racism at the Seattle Police Department was so intense that few Black officers were permitted to join the force for a hundred years, and even their presence did little to erode the political edifice that shielded Seattle cops who abused their power. In the rare event that Seattle police were actually held accountable, they enjoyed legal impunity, eventually eschewing the pretense of “law and order” to exercise naked force on their political enemies.

When I ran for Seattle City Council in 2019, I did so as an open police abolitionist — not because I believed that the Seattle Police Department was “broken,” but because I thought history indicated the department was working exactly as intended. Even a federal probe initiated after Seattle cops killed John T. Williams in 2010 did not prevent the 2017 police killing of Charleena Lyles in the district I attempted to represent. In my lifetime — and in the lifetimes of millions of millennials and Gen-Z’ers — American policing has taken a turn even more troublesome than the pattern established in Seattle centuries ago.

The past 35 years have seen federal grants for military equipment given to local police departments in a devastating “War on Drugs” that threatened to reduce resilient Black communities to socioeconomic rubble. During the past 35 years, racist laws like Seattle’s “drug-loitering” and “prostitution-loitering” ordinances were used as a pretext to badger transgender and cisgender Black women. In the middle of those 35 years, the ugly spectacle of police brutality was put on display at the 1999 World Trade Organization protests, ushering the department’s historic use of unconstitutional force into the 21st century.

Some local “progressives” have responded to this continued escalation by cheerleading the construction of youth jails, while many of our favorite superstar Democrats accept campaign contributions from police unions. It seems the past 35 years were not so different from the 19th and 20th centuries, when Seattle politicians gave a racist police establishment political cover.

But 2020 is a new day. The Seattle Police Department is on the political defensive. The Seattle Police Officer’s Guild has been expelled from King County’s AFL-CIO labor federation. The movement to defund the Seattle Police Department and reinvest in Seattle’s Black community has heralded a shift from the futility of reform to the specter of abolition. The widespread uprisings in the wake of George Floyd’s killing in Minneapolis show that many across the country view their local police departments as regressive political forces who maintain chokeholds on municipal budgets everywhere.

The Seattle Police Department currently flaunts a $13.3 million line item for “homeland security.” Total operating expenses for the city’s 2020 streetcar system come to $11.7 million. The city has paid $6.3 million in overtime wages to police officers since widespread anti-police brutality protests began on May 30. Seattle’s current annual expenditure for its Office of Civil Rights — which features dozens of volunteer appointees who advise the city council and mayor on substantial policy recommendations — is $4.6 million.

What is a free society that spends more on carceral infrastructure than on the programs that make it free?

The fire this time

Saturday, May 30, 2020, was a momentous day in Seattle history. Wearing taxpayer-subsidized riot gear, Seattle Police awaited their Armageddon with the right side of history, clinging to the façade of institutional legitimacy, faithfully executing their solemnly sworn duty to protect and serve the Cheesecake Factory. Rolling rainclouds forecasted a new American Spring. Seattle skies brought water, but Seattleites brought fire; the “fire next time” predicted by James Baldwin in his 1963 book of the same name.

Baldwin referred to the caveat of increasingly radical tactics to initiate the change that had eluded previous generations of civil rights activists. And yet the path of escalation is a city boulevard with two lanes traveling in opposite directions; as anti-racists gain new ground in this country’s new civil rights struggle, racist police will feel a renewed sense of political invincibility if they are not properly taken to task in this pivotal moment.

In 2020, the Seattle Police Department is still what it has been since 1869: a political institution that keeps tabs on real and perceived political enemies, waiting impatiently to exact revenge. In 2017, two Seattle cops had the brass to sue a sitting city council member who referred to their killing of Che Taylor as “murder.” When protester Evan Hreha recorded and circulated video of Seattle Police pepper spraying a 7-year-old child on May 30, Seattle officers tracked Hreha down and arrested him for no real reason at his doorstep a week later.

Should Seattle’s political leadership not make use of the mandate to defund and dismantle racist policing once and for all, the results could be catastrophic for the populations most likely to be subject to racist policing in the first place.

“The hard-fought victories of the Civil Rights Movement caused a reaction that severed the jugular of the Voting Rights Act, poured crack-cocaine into the inner cities, and locked up more black men proportionally than even apartheid-era South Africa,” wrote Carol Anderson in her 2016 book White Rage: The Unspoken Truth of Our Racial Divide.