More than 90% of the songs aired on Daybreak Star Radio are written, produced or performed by Native American or First Nation peoples. 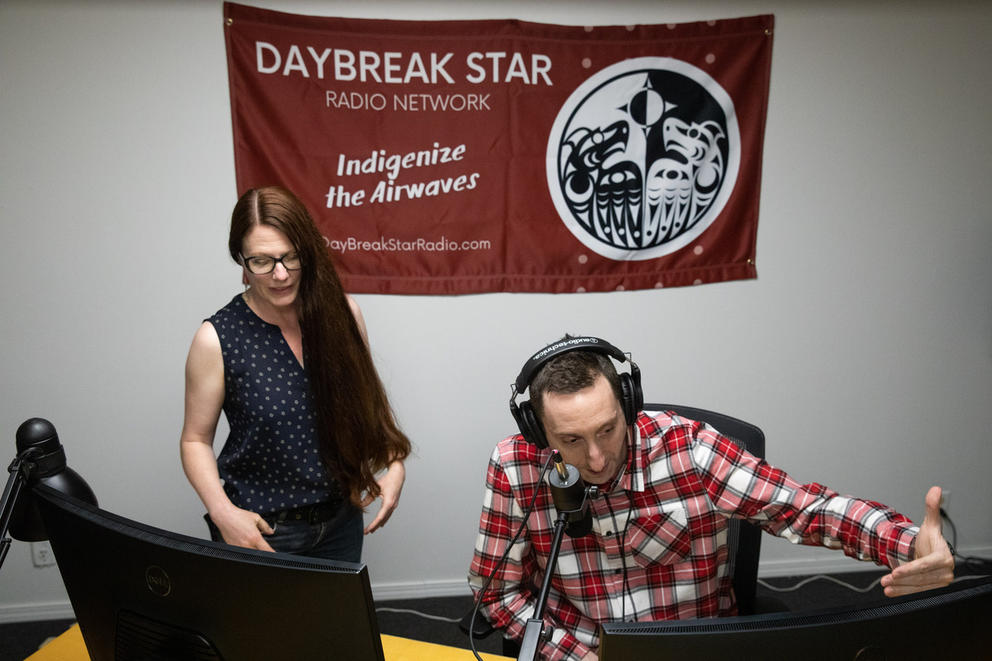 Tracy Bone’s “Woman of Red” has all the trappings of a good country song: a twangy tune, catchy riff and, most importantly, a one-two punch of pain and perseverance. “I’d walk with my eyes to the ground so I couldn’t see,” she croons, “the beauty in people like me, the courage to fight the memories.” Hailing from the Keeseekoowenin Ojibway First Nation, the singer-songwriter struck a chord with her 2012 album by the same name. “I am a woman of red,” she sings. “Resilient my spirit.”

As the song fades from the speakers, DJ Harris Francis keeps one eye on his monitors and the other on the broadcasting console beneath his fingers. He brings the mic closer to his face. “Hopefully you're having a great day, got exciting plans for the weekend coming up,” he says, turning on his practiced radio voice. “We got some Bear Fox coming up, ‘Pink Skies.’ We got Willie Dunn, ‘Crazy Horse.’ We got William Prince, ‘Wasted.’ We got a lot of great music coming up right here on the Daybreak Star Radio Network.”

On his screen, blue pins on a digital U.S. map indicate that people are currently tuning in from the Pacific Northwest and Oklahoma. “Right here, Native American, 24/7. Coming from Seattle,” he says, “Thanks for listening.”

In Francis’ case, “right here” is a small, soundproofed room on the lower floor of the Daybreak Star Cultural Center in Seattle’s Discovery Park. The longtime Native community center and headquarters of the United Indians of All Tribes Foundation is now home to a brand-new — and rare — initiative: Daybreak Star Radio, an international online radio station fully dedicated to Indigenous music, arts and culture.

The station launched last month, and last week premiered a rotating cast of DJs, including the hip-hop-focused Jamie “DJ Tee” Thomas, who will be broadcasting from Lapwai, Idaho, on the Nez Perce Reservation, and David Hillaire, aka DJ Big Rez of Bellingham radio station KZAX, a member of the Lummi Nation. An Android and iOS app will be released in the coming weeks.

“Our be-all, end-all goal is to be the No. 1 Native American radio station in America,” says Francis, the station’s program director (who is not Native), as he takes a break from DJing while the NextCast system automatically plays the songs he has lined up.

Though Daybreak Star Radio’s mission is to “Indigenize the airwaves” — a motto written in white cursive on a large red banner hanging near the DJ table — the music isn’t actually broadcast on the airwaves in the radio and television sense, but rather digitally, via a browser or app. That’s a lot easier and cheaper than establishing an FM station, and has a much wider reach potential, as it’s accessible to anyone with an internet connection.

Provided they have internet access or 4G, “every single reservation could get our station,” says Daybreak Star Radio station manager Sherry Steele, an enrolled member of the Peoria Tribe of Oklahoma. “Our goal is to reach Native peoples, specifically of the Americas. Everyone from Chile to the [Arctic]. We want the tribal peoples involved and we want their music, and we want people to hear it.” 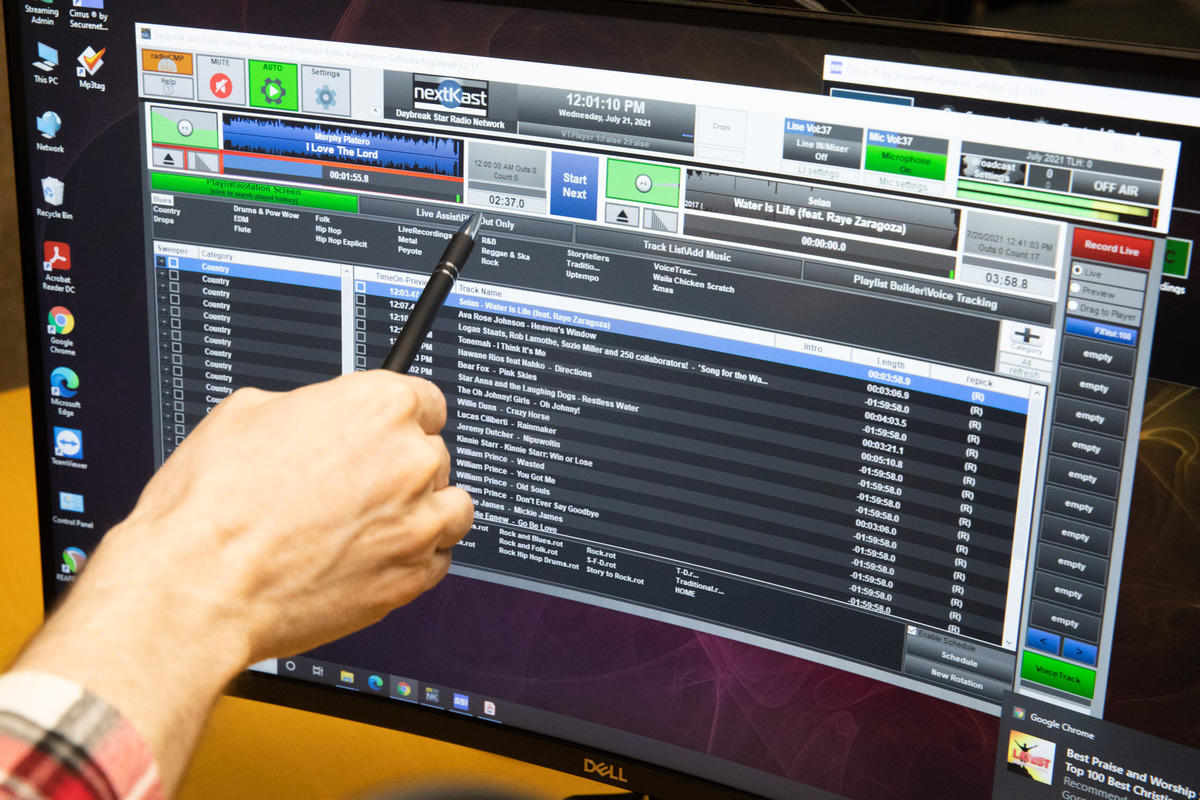 On air during my visit is a “Country Chill” set, a mix of folk, country and “chill-out” music, all written and/or performed by Native American and First Nations musicians. Also on the docket today: two hours of rock, a hip-hop set, as well as storytelling, flute music and traditional/peyote and drumming. And later, Francis assures, there’ll be pop, R&B and EDM, too. And metal. The vast majority of aired songs — about 95% — are produced, written, created or played by Native American or First Nation peoples.

This includes Pacific Northwest bands and musicians, such as Litefoot, a Seattle-based hip-hop artist also known as Gary “Litefoot” Davis (Cherokee and Chichimeca), the Portland-based Katherine Paul aka Black Belt Eagle Scout (Swinomish/Iñupiaq) and Blue Flamez, the stage name of Scott Kalama (Confederated Tribes of Warm Springs). But Daybreak Star Radio plays music from all over the Americas, as well as some other world tribal music. They also play music by non-Indigenous artists who advocate for Indigenous causes, such as Standing Rock, or who help preserve Indigenous musical knowledge.

“What I really wanted to do is to provide not a station that played Native hip-hop, I wanted to have a station that played Native music,” says Steele, who helped found the station with Francis and is responsible for much of the music curation. “Which meant we would incorporate all genres as much as possible and reflect the experience of Native peoples in music — and not just the stereotype of Native peoples and music.”

The recent documentary series Rumble: The Indians Who Rocked the World, and traveling Smithsonian exhibit Up Where We Belong: Native Musicians in Popular Culture have highlighted the contributions of Native American musicians — such as rock ’n’ roll icons Buffy Sainte-Marie, Link Wray and Jimi Hendrix, influential blues musician Charley Patton and The Black Eyed Peas’ Taboo — to the music canon. But stereotypes about Native music (and musicians) persist.

“Some people just think of us as powwow music or maybe some spiritual music,” says Michael Tulee, executive director of the United Indians of all Tribes Foundation, during a recent phone call. “In reality, Native Americans have had a hand in all kinds of music from all across our nation.”

Though Tulee, a member of the Yakama Nation, is a music buff whose extensive collection has helped build the station’s playlists, he originally envisioned a cross-country talk radio station that would enable Native people to have a space to discuss issues affecting their communities and the Native community at large.

Many tribes broadcast from their own radio stations, Tulee says, but they’re usually limited to a certain FM range. “I thought: how do we get more? How can we get a stronger platform? How can we get the word out, touch more lives?” 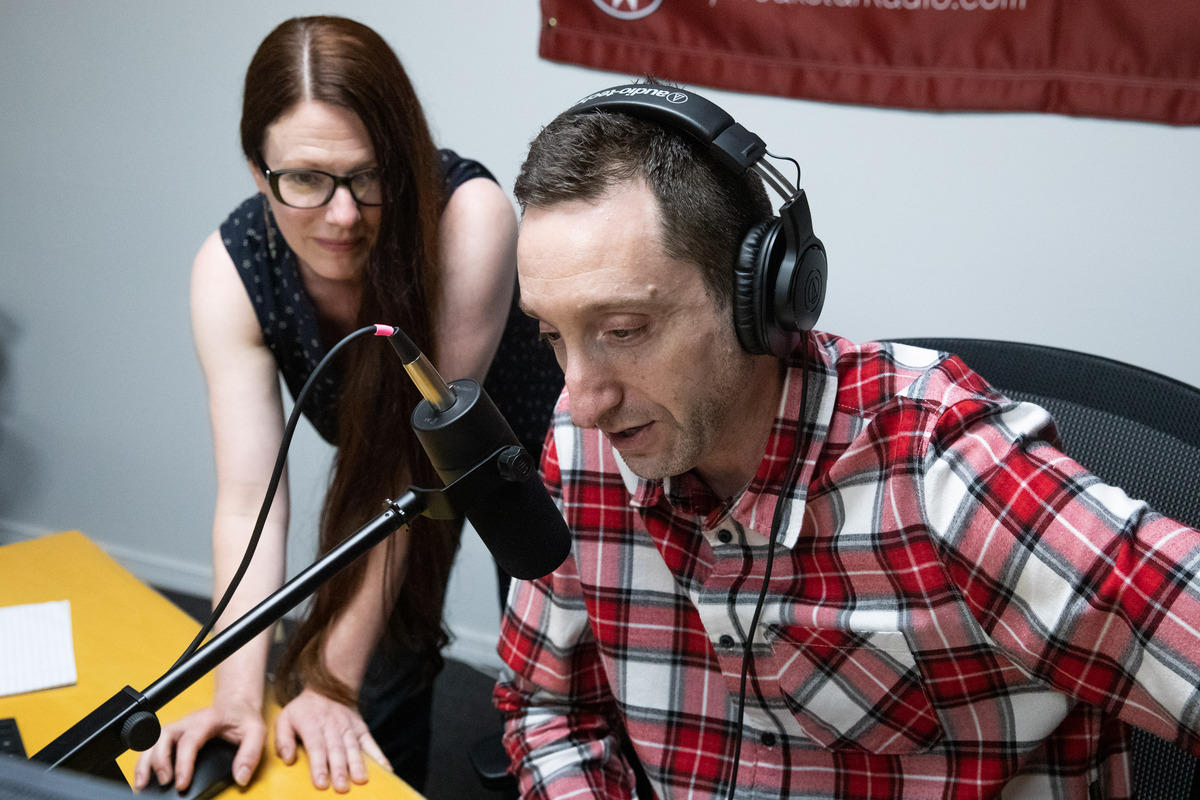 So, early this year, he decided to call in to a radio station himself, the Central District-based Rainier Avenue Radio, where he’d once been interviewed. His question: “If I was to set up a radio station, how would I go about it? Who do I talk to?” The person to talk to turned out to be Francis, a longtime DJ who walked Tulee through the basics of radio. Kismet.

Early this past spring, Tulee tapped Francis and Steele to build the radio station together. Over the course of half a year, they transformed what used to be the nonprofit’s inventory/storage room into a soundproofed radio studio, painting and padding the walls and installing a special soundproof drop ceiling. Francis scouted for DJs while Steele focused on building up the music library based on Tulee’s and her own collection.

Steele and Francis may seem like a bit of an unlikely pair, but they work well together. Steele, who also does the nonprofit’s accounting, has amassed a personal Indigenous music collection that could run for 50 days without playing the same song twice.

She often stays up late researching new artists, getting sucked into a YouTube wormhole. “I get excited and then I can't sleep. Like, oh they're featured with this other artist? Oh, my gosh, that person's from the Navajo Nation. Oh, wait, they're playing with this Tohono O'odham person. Oh, wait, now this Cherokee person is also doing something similar and cool,” she says. Her most recent find is a Pacific Northwest fiddling group called 3Fiddlers 3Traditions, whose backgrounds are Danish, American, and Native American (Métis).

Francis — aka DJ Dirty Harry — has extensive radio experience, most notably as executive producer at local hip-hop station KUBE 93.3. When I meet him, he’s wearing shiny, gold Nike sneakers, an oversized watch and a Gucci-patterned face mask. He likes to dream big, and talks about the technical ins and outs of radio, business deals and sponsorships.

“Mike [Tulee] and I talked quite a bit about having a non-Native person as our program director,” Steele says regarding the decision to bring Francis into the mix. “Harris has tremendous experience in the record and music industry. And it was his willingness to lead us to create a radio station that is unmatched,” she says. Plus: his willingness to share his knowledge of the industry. “We really want to be able to teach our youth, or anyone really, who would want to learn how to use radio,” Steele says. “We would like to bring them in and teach them how to do that.”

Also in the works: licensing deals with a daily Indigenous news broadcast and The War Cry, a woman- and Two-Spirit-run podcast that takes a crime story approach to the issue of missing and murdered Indigenous women. The station is also in talks with other podcasters and Native storytellers. More DJs will join the roster, including DJ Abe Cortez — who will play rock and hip-hop rooted in Latin-American Indigenous traditions — and Luminous Pariah, a Seattle-based, Indigenous burlesque performer (Seminole/Choctaw/Navajo) who will be playing EDM and electronica. Steele also plans to do interviews with nonmusical artists, particularly those who showcase their work in the Sacred Circle Gallery & Gift Shop locations at Daybreak Star, the Seattle-Tacoma International Airport and the new offshoot in Ballard.

Tulee is also hoping to have regular talk radio sessions where Indigenous people from across the Americas can call in to discuss (often tough) issues, such as disenrollment, education and missing and murdered Indigenous women. “That's something that we would like to begin in Indian Country. I'm pretty sure that doesn't quite happen yet,” Tulee says.

With Daybreak Star Radio Network, the launchpad for these discussions and connections is here — and the possibilities are endless, Tulee says. “I want it to reach all across our nation,” he says. “I want people to really feel like, ‘Oh my gosh: we got a voice.’ ”