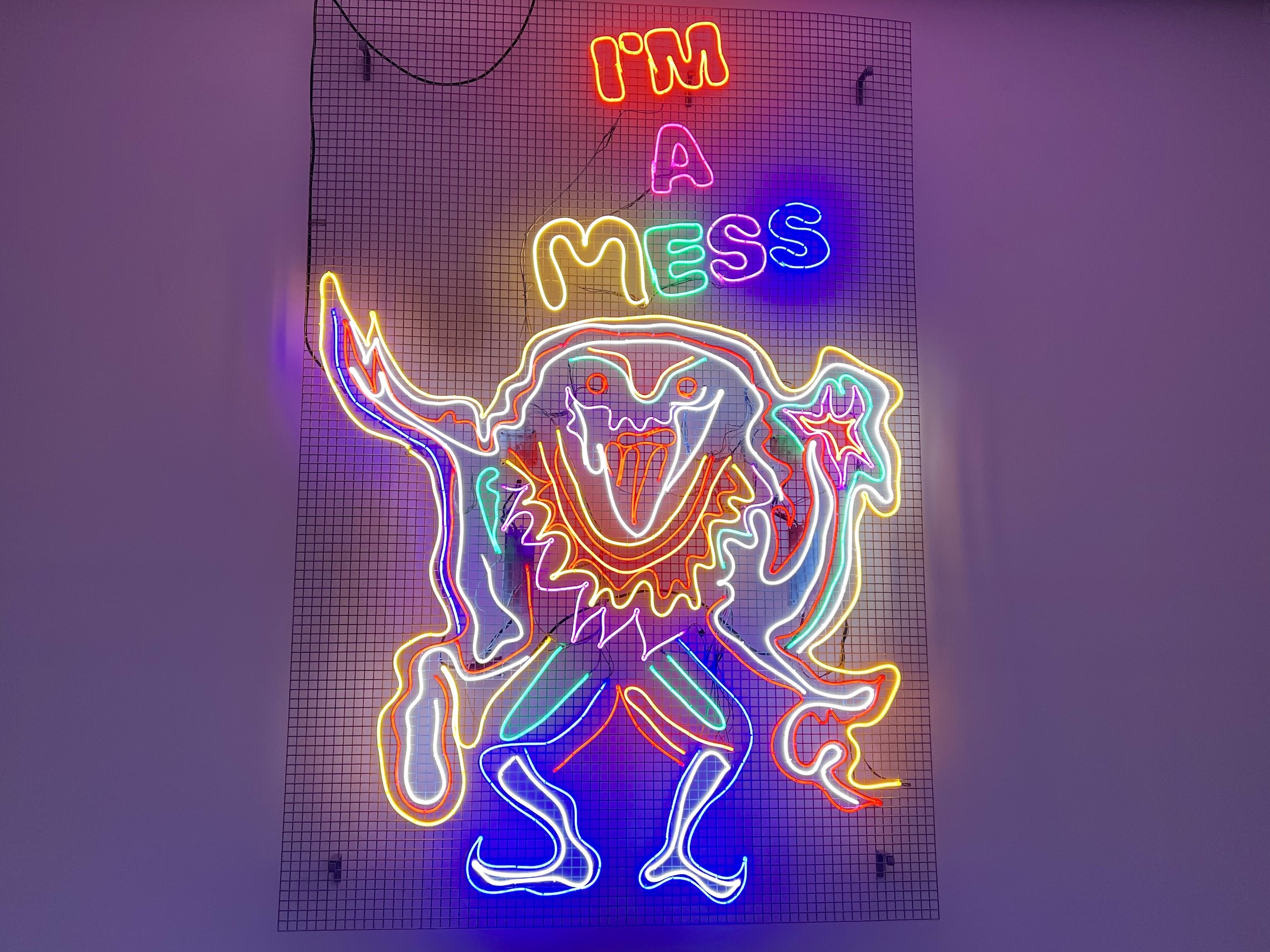 Ever since flickering onto the pop culture scene in the 1920s, neon signs have been designed to entice passersby — into bars, theaters, dens of ill repute and chapels of love. Far more rarely have they drawn onlookers into venerable art museums. But a new neon sign at Seattle Asian Art Museum might do just that.

Aglow in the windowed jewel box gallery that’s visible to walkers in Volunteer Park, a vivacious neon figure looks both ready to party and a little hungover. The squatty creature is imbued with a jittery aspect, thanks to multicolored, asymmetrical, wavy neon tubes. Its elfin blue toes suggest a playfulness, while its scribbly mouth hints at something more dangerous. (It might not have control of its many limbs.) “I’m a Mess,” reads the neon block text.

It may not surprise you to learn the piece was made in 2020. British artist Chila Kumari Singh Burman originally created “Kali: I’m a Mess” as part of a large-scale neon installation on the august façade of the Tate Britain museum in London. She intended this Kali — the Hindu goddess of protection, destruction and time — to resonate with the political and social upheaval of that year.

“Kali: I’m a Mess” is part of the new exhibit Embodied Change: South Asian Art Across Time (through July 10). It’s the first show curated by Natalia Di Pietrantonio, SAM’s new (and first-ever) assistant curator of South Asian Art, who has brought together a lively mix of works focused largely on the body. 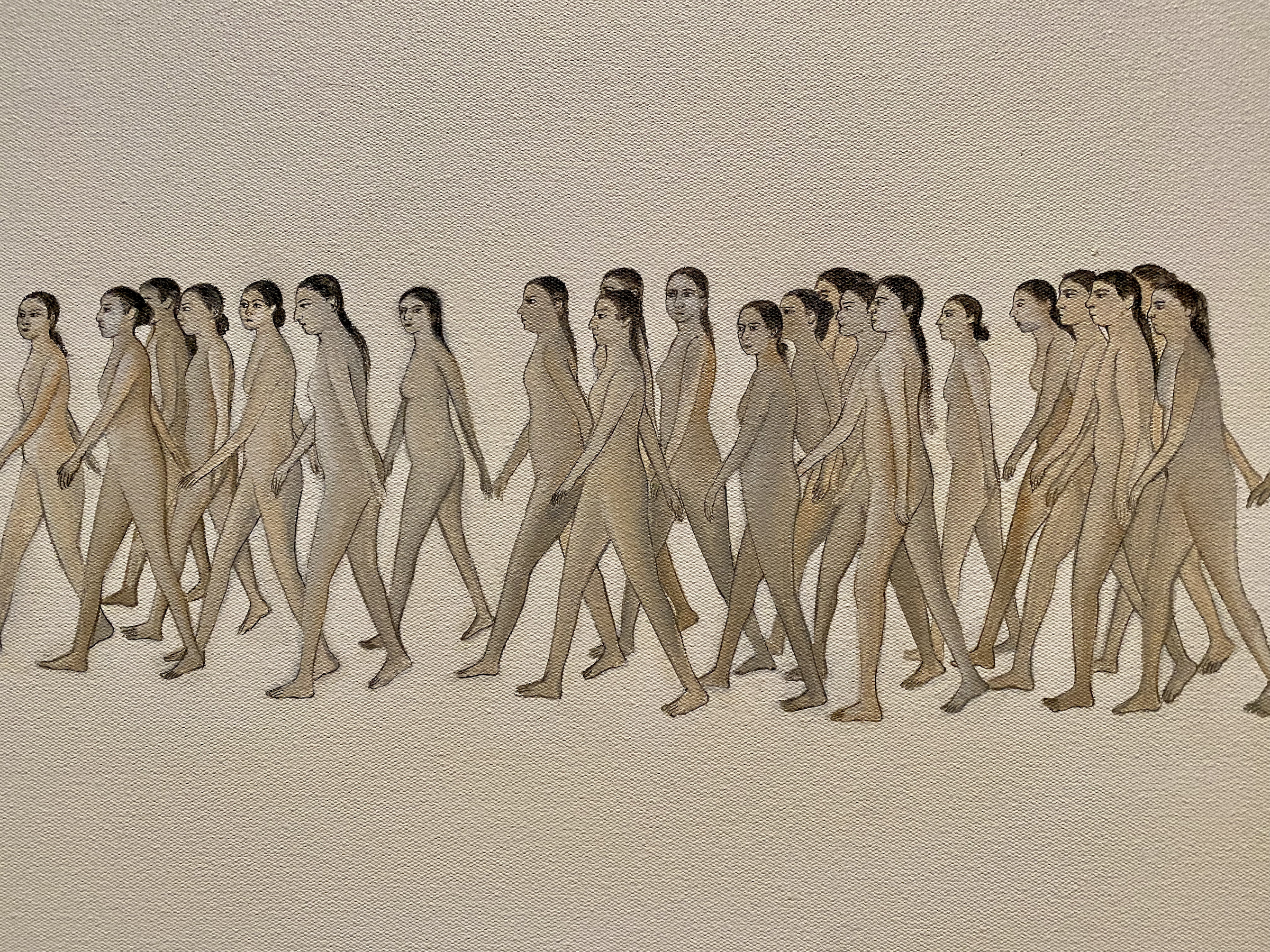 When I visited the show last weekend, I was thrilled to learn about contemporary artists who were entirely new to me, including neon artist Burman, as well as longtime Indian artist Baua Devi, whose “Madhubani” folk paintings are electrified by vivid natural paints instead of neon gas.

In Malavika Rajnarayan’s mysterious, elongated painting, a crowd of nude women walks determinedly toward something in the distance. Influenced by Indian miniature painting techniques, she made it with a traditional instrument: a tiny paintbrush made of squirrel hair. And it’s always a treat to see Pakistan-born Northwest artist Humaira Abid’s hyper-realistic wood carvings up close — this time taking the shape of a suitcase packed with clothes and prayer beads, outside of which a dark wooden handgun lies inert but menacing.

I was particularly taken with “Death at a 30 Degree Angle,” a dual-channel video installation by Pakistani artist Bani Abidi. In the 15-minute documentary style video, she reveals the busy studio of renowned real-life statue sculptor Ram Sutar (who designed the Statue of Unity, the world’s tallest), where artisans mend broken arms and form clay into serious faces. All around, bruised facsimiles of former leaders are stored in various states of decay.

Into this scene Abidi adds the fictionalized scenario of an upstart official who has come to have his likeness sculpted. The film contains few words but incisive humor, as we watch him try out different poses and outfits with which to commemorate his legacy. Using cleverly placed mirrors, Abidi juxtaposes this man with the detritus of faded glory, as well as a puffed-up pigeon and the backside of a clay horse. 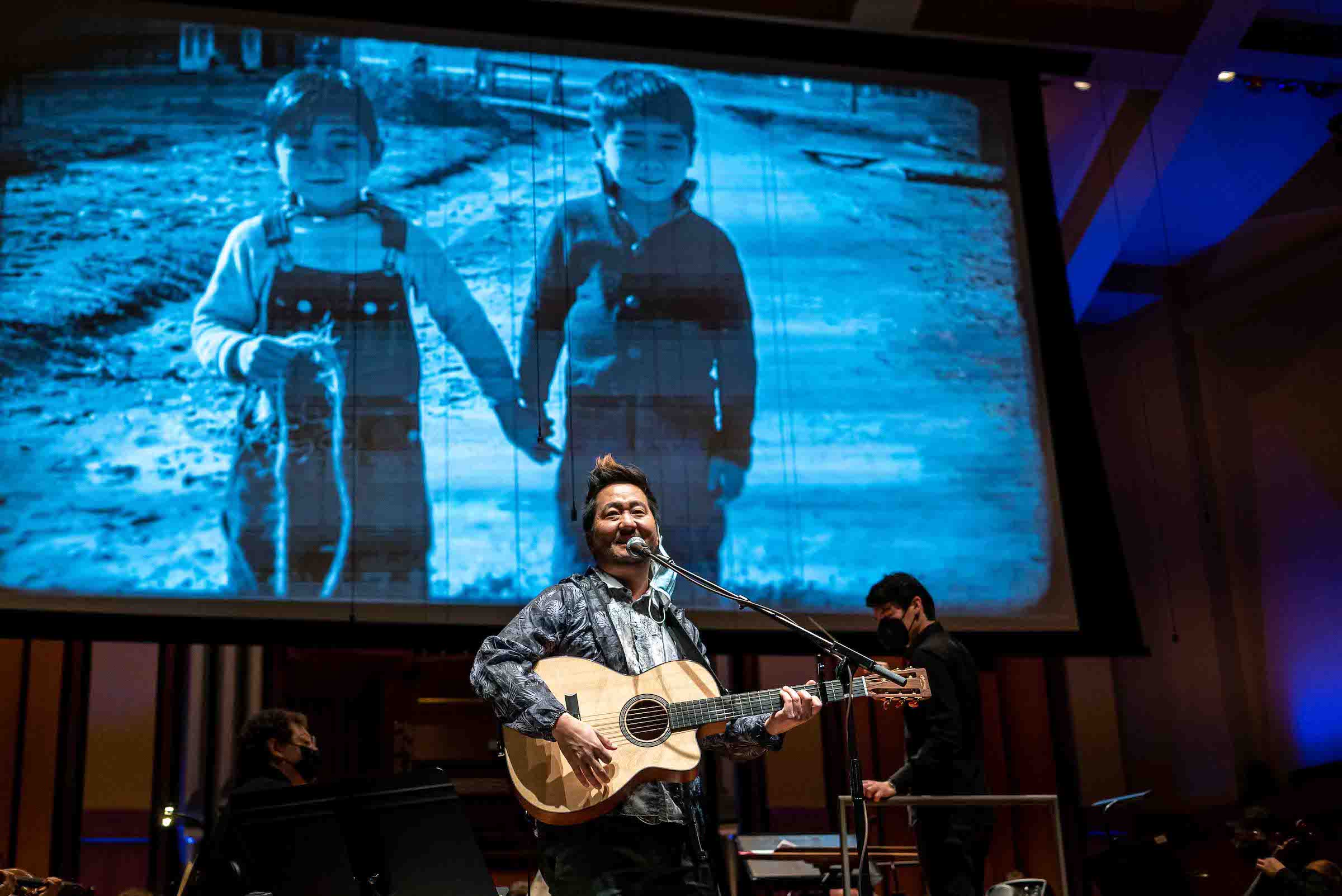 On the darker side of delusions of grandeur: Today is International Holocaust Remembrance Day, which two local organizations are commemorating with online concerts. Music of Remembrance, a group dedicated to remembering the Holocaust — and calling out other human rights abuses — through classical music, is presenting Art from Ashes (free, streaming through Jan. 31). This year’s lineup of all-new performances features solos, duets and choral pieces written by composers who were imprisoned in Nazi concentration camps, including two beautiful tango works written by prisoners in Auschwitz and Buchenwald.

More stories of stunning perseverance will be showcased in Hours of Freedom (free with tickets starting Jan. 27, available online after). Presented by Seattle’s Holocaust Center for Humanity, the streaming concert features works that composers wrote while imprisoned in the Terezín concentration camp. The event reflects two astonishing truths: that these compositions survived the camps, and that even amid horrific circumstances, the musicians were compelled to create art to be heard in the future.

We’re coming up on the anniversary of another painful legacy from World War II: Feb. 19 marks 80 years since Franklin D. Roosevelt signed Executive Order 9066, which led to the incarceration of some 120,000 Japanese Americans in internment camps. The majority of those imprisoned were American citizens. The Seattle Symphony is marking the anniversary with a concert featuring original compositions by two Seattle-born composers.

The EO9066 program (at Benaroya Hall, Jan. 27 at 7:30 p.m., Jan. 29 at 8 p.m.) starts with the world premiere of Beyond the Hills, by Japanese American composer Paul Chihara. He based the piece on his memories of the music he listened to while incarcerated with his parents in the Minidoka camp in Idaho, where they lived for four years.

Also on the bill is singer/songwriter/violinist Kaoru Ishibashi — aka Kishi Bashi — whose contemporary orchestral piece Improvisations on EO9066 was inspired by his visits to several historic internment sites. While his parents came to the U.S. after the war, he says experiencing the locations in person helped him connect with his identity, as well as his understanding of how this history lives on today. His songs hum with compassion — and a hopefulness inherent to survival. 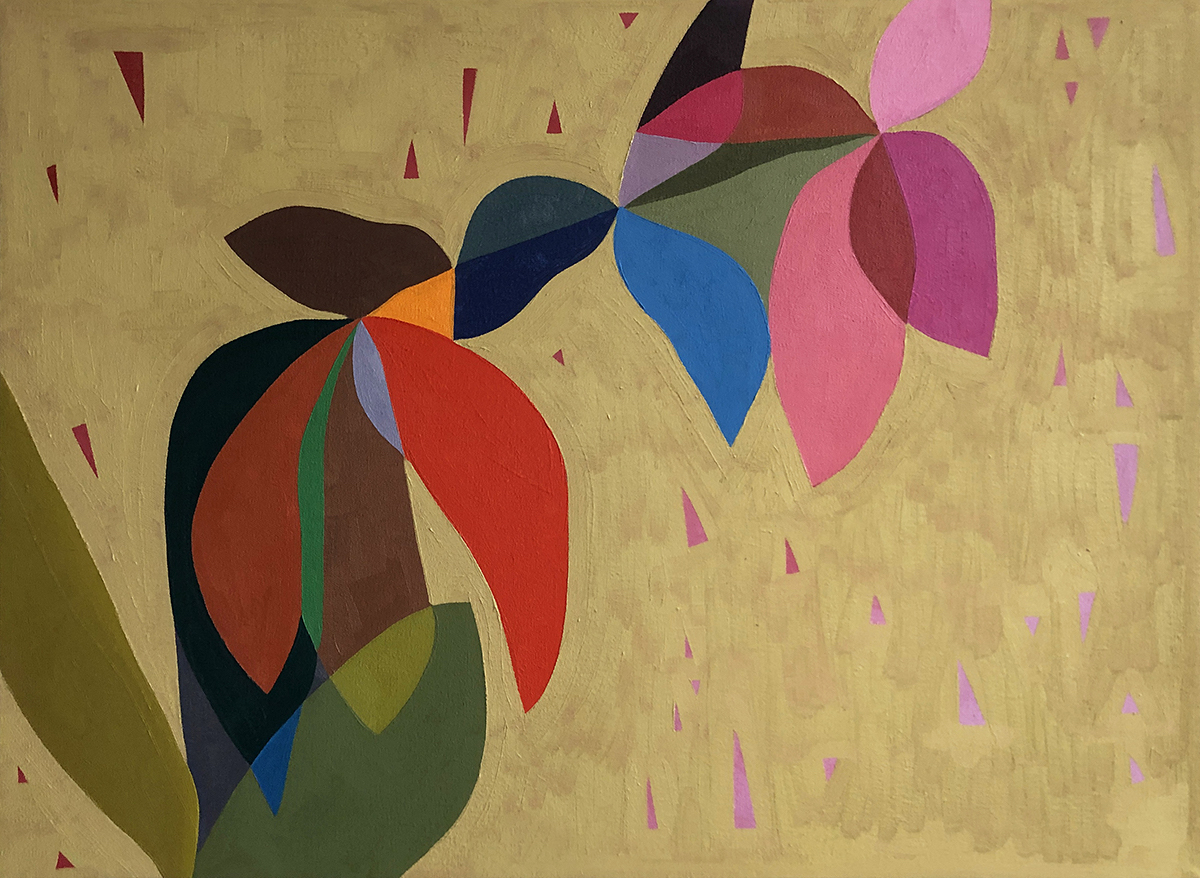 I’ll close my 150th newsletter as I started my first: sharing ways to experience work by some of the many local artists who make this region such a special place for art.

• The always astute Seattle playwright Yussef El Guindi presents the world premiere of his new play Hotter Than Egypt at ACT theatre (Jan. 28-Feb. 20). The dramedy concerns an American couple on vacation in Egypt, where their marital issues become unearthed and entwined with their locally based tour guides — an engaged couple. As always, El Guindi delights in digging into the power dynamics of gender, ethnicity and class.

• Seattle-based Canadian author Kim Fu celebrates the release of her new short story collection, Lesser Known Monsters of the 21st Century, with a virtual reading via Third Place Books (Feb. 2 at 7 p.m.). I was a big fan of Fu’s first novel, For Today I Am a Boy. Now I’m reading this latest book and really enjoying the haunting mix of Black Mirror meets magical realist tales.

• And for those seeking a hit of rich color to get through the cold days, check out these local painters offering up hues you can use: Elizabeth Gahan’s pastel-pop renderings of urban Seattle landscapes at Linda Hodges Gallery (through Jan. 28); Johanna Christianson’s lush abstractions recalling Matisse cutouts at Koplin Del Rio Gallery (through Jan. 29); and Barbara Robertson’s layered architectural tableaus at Zinc Contemporary (through Feb. 28), some available on canvas and others as NFTs.