Can younger generations spur corporations to divest from fossil fuels?

Youth activists in Seattle call out banks and insurance companies for fueling the climate crisis. 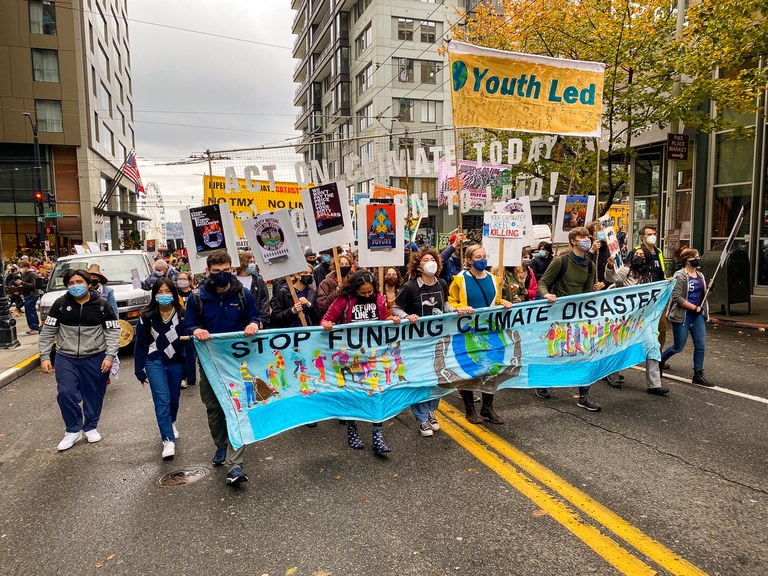 Bulging gray rain clouds threatened to open up on a crowd of protesters on a recent Friday morning in Seattle. A few hundred people, mostly high schoolers and university students, held banners and hand-painted signs that read: “Youth demand climate justice,” “Stop the money pipeline” and “It’s our turn to lead.”

They marched six blocks, from Pier 62 on Seattle’s waterfront to the corner of Second Avenue and Union Street, where they unfurled a long banner and staged a die-in — lying on the ground to dramatize the deadly stakes of the climate fight. In many ways, the actions and rhetoric mirrored previous youth climate protests, but this one differed in one notable regard: Instead of standing in front of City Hall and appealing to elected officials, the protesters were lying in front of the Pacific Northwest headquarters of the JPMorgan Chase bank.

This story was originally published at High Country News on Nov. 4, 2021.

The “Fossil Free Future” campaign aims to engage a growing number of young people to boycott banks, insurers and other companies that fund fossil fuel projects, not just by withholding their money, but also their future labor.

“Why not just go to the source if we know that corporate actors are the issue?” asked Sof Petros, a 24-year-old climate activist who helped organize the Seattle protest. “We have power as current and future customers, employees and the public to push these banks to move towards better positions and be held accountable for past, current and future financing of fossil fuel projects.”

Seattle’s protest — one of dozens in cities and towns across the U.S. — came in the wake of national struggles to pass policies that experts say are needed to keep the U.S. on track to meet its climate targets. It also coincided with the start of the 2021 United Nations Climate Change Conference, or COP26, an international gathering of governments around the world that many have said will be “the whitest and most privileged” assembly yet.

Over the past two decades, these conferences have largely failed to achieve the greenhouse gas reductions needed to keep the world from reaching dangerous levels of warming. It’s this growing disillusionment with government action that has motivated youth to follow the money instead, said Petros.

The International Energy Agency and Intergovernmental Panel on Climate Change both released alarming reports this year showing that if the world is going to stay below 2.7 degrees Fahrenheit (1.5 degrees Celsius) of global warming, no new fossil fuel projects can be built.

Yet major banks and insurance companies continue to underwrite and insure new coal and oil and gas extraction and infrastructure. A report released in March found that since the Paris Agreement in 2015, the world’s 60 biggest banks have funded almost $4 trillion worth of new fossil fuel projects. The new youth campaign includes pledges not to bank or work for financial institutions that finance fossil fuel projects, as Chase does.

“You’re more likely to divorce than you are to switch your bank,” Petros said. “Banks know that, and they are courting youth as lifelong customers. And we represent decades of a future customer base.”

The high school and university students join a growing number of climate campaigns, from shareholder activism to university divestment campaigns, that are calling for institutions to stop financing fossil fuel projects. But the power that they hold over companies goes beyond just their money. As baby boomers retire, the U.S. faces a growing recruitment crisis.

According to a survey by ManpowerGroup, one of the world’s largest staffing firms, the number of employers struggling to fill positions has tripled from 14% in 2010 to 69% today. COVID-19 sparked a wave of resignations and made the ongoing labor shortage worse. Financial services and the insurance sector in particular are in the midst of what some have called a “crisis” to recruit new talent.

The priorities of the younger generations are obvious. Polls regularly show that climate change is one of the top concerns of Gen Z. And almost three-quarters of millennials would take a pay cut to work with a company that is environmentally responsible.

Aedan McCall, who spoke outside of Liberty Mutual during the Seattle march, is one example. The University of Washington student is studying computer science and grappling with how to enter a workforce and industry that directly and indirectly contributes to climate change, not just through emissions, but also by supporting the extraction of fossil fuels through their products, such as helping develop algorithms to find new oil reserves.

McCall says that when students enter the labor market in the next few years, evidence that a company takes climate change seriously and shares key values will influence everything from where they decide to work to where the recruits bank and what kind of life or property insurance they choose.

Outside of Chase, demonstrators constructed an altar to showcase objects that they expect to see disappear in their lifetime. Someone had scrawled, “Every summer I watch another place I love burn down. We can never return” on top of a Lake Tahoe road map in front of pictures of penguins and sea stars. “Now, more than ever,” said McCall, “is a key moment to act because we're running out of time.”

This story was originally published at High Country News on Nov. 4, 2021.

Sarah Sax is the climate justice fellow at High Country News currently living in rural Washington. Email her at sarah.sax@hcn.org.

Sarah Sax is a freelance environmental journalist and producer.