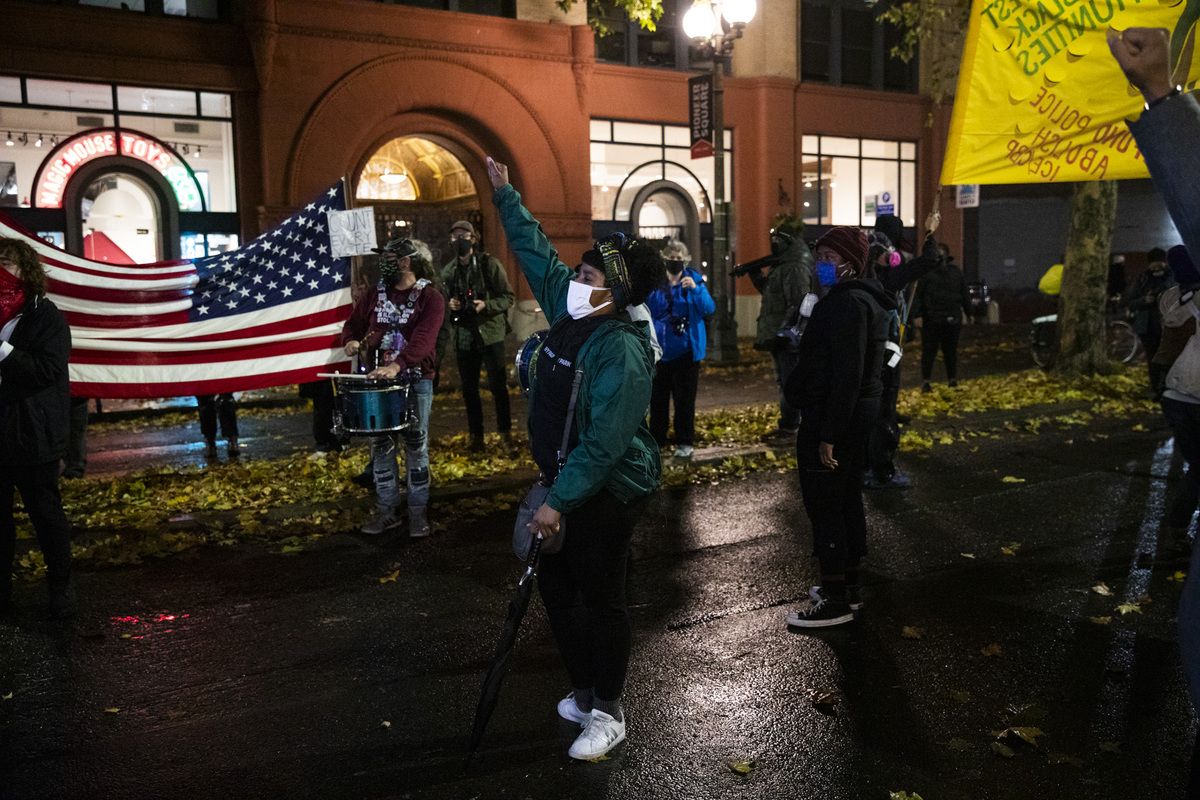 Protesters chant as they march during a “Count Every Vote, Protect Every Person” march in Pioneer Square on Nov. 4, 2020. Protesters demanded counting every vote, ending the Electoral College, protecting undocumented immigrants, defunding the police and investing in Black communities. These demands are a continuation of what Black organizers in Seattle have been calling for every day for months. (Dorothy Edwards/Crosscut)

Last week, days before Joe Biden became president-elect, hundreds of people gathered in Seattle to express their outrage over the Electoral College, in part because of its connection to the systemic racism the Black Lives Matter movement has protested.

“The Electoral College was literally built on the idea that Black peoples are not human beings,” said activist, attorney and former mayoral candidate Nikkita Oliver. “We must face the white supremacist racist history of this country, and we must abolish every mechanism that keeps it in place, from the electoral, to police, to the criminal punishment system.”

Oliver joined the chorus of people calling for this constitutional change. As the vote counting in the presidential election dragged on for days, in part because of the surge in mail-in voting necessitated by the pandemic, social media was flooded with messages from people lashing out at the Electoral College.

Activists, politicians and academics in the Pacific Northwest and across the country are asking themselves what can be done to ensure the 2024 presidential race doesn’t turn into another unnecessary nail biter.

“It's a cliffhanger in the Electoral College, but you won at least 4 million more votes,” said Alexander Keyssar, a professor of history and social policy at Harvard University, referring to Biden’s lead in the popular vote as of Monday.

“That gap and this whole screwball thing that we've been through for the last X number of days about this state and that state, this margin and that margin, I mean, is this really your way to run a railroad?” continued Keyssar, who just published a new book on the Electoral College titled Why Do We Still Have the Electoral College? Keyssar said he believes the movement to abolish the Electoral College is stronger now than it has been since the 1960s.

Recent polls show that a majority of Americans agree with that sentiment. In a 2018 PRRI/Atlantic survey, 65% supported selecting the president by popular vote, compared with 32% who preferred keeping the Electoral College. 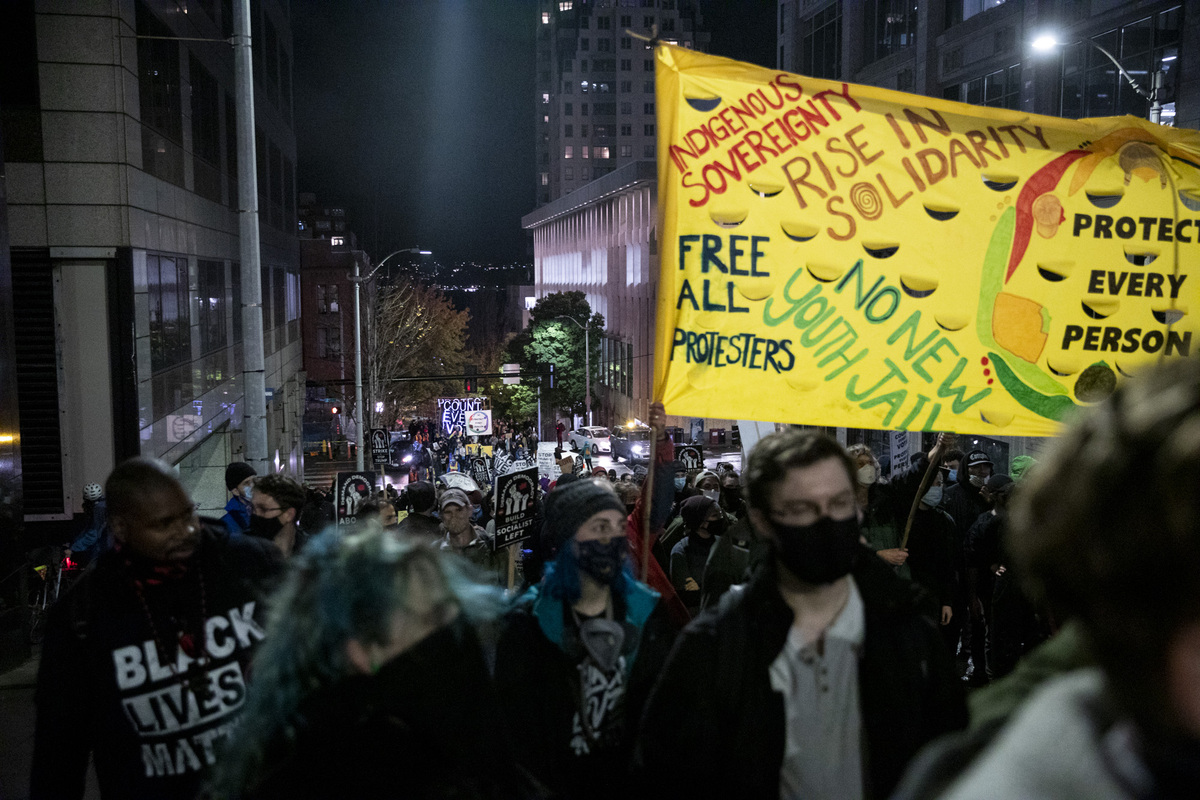 Hundreds of people march through Pioneer Square during the ‘Count Every Vote, Protect Every Person’ march on Nov. 4, 2020. Protesters demanded counting every vote, ending the Electoral College, protecting undocumented immigrants, defunding the police and investing in Black communities. These demands are a continuation of what Black organizers in Seattle have been calling for every day for months. (Dorothy Edwards/Crosscut)

Hundreds of people march through Pioneer Square during the ‘Count Every Vote, Protect Every Person’ march on Nov. 4, 2020. Protesters demanded counting every vote, ending the Electoral College, protecting undocumented immigrants, defunding the police and investing in Black communities. These demands are a continuation of what Black organizers in Seattle have been calling for every day for months. (Dorothy Edwards/Crosscut)

According to the system laid out by the Constitution, when Americans vote for a presidential candidate, they are technically instructing electors in each state how to cast their votes. The number of electors in each state is based on the number of people it sends to Congress. So that's two for a state's U.S. senators, plus the number of seats it holds in the U.S. House of  Representatives. The House number is based on the state's population and is reassessed each decade after the completion of the U.S. census.

Historians say the framers of the Constitution designed the system this way for a number of reasons. They feared, for example, that the interests of states with smaller populations would be ignored if a direct national popular vote were employed instead. Only the more populous states would have a say in presidential races.

But over the decades, the Electoral College has remained controversial not only because it avoids the one-person, one-vote principle, but because of slavery's role in its development. Although slaves were unable to vote, the constitutional framers decided that enslaved people would be counted as three-fifths of a white person with regard to the apportionment of congressional seats in each state. This gave states in the South with more enslaved people more power in the Electoral College. The desire to hold on to that power remained long after slavery was abolished.

“It was originally about rewarding slave states, and it continues to have a racial impact today,” said William Blake, a political science professor at the University of Maryland, Baltimore County.

Blake said the Electoral College gives more votes per capita to smaller states, which tend to be more white. Federal land policies encouraged the population to move west, but African Americans didn’t have the money to move, Blake said.

Those who advocate abolishing the Electoral College argue that the system has encouraged a lack of political engagement in certain parts of the country and has unduly emphasized a handful of states and issues important to those states. This year, for example, fracking became a key issue in the presidential race because many experts saw Pennsylvania — a so-called swing state — as the state that could potentially put one candidate over the top. Fracking, a form of oil and natural gas extraction, is important in Pennsylvania because it sits atop the Marcellus Shale, estimated to be the largest gas field in the United States.

Those who favor abolishing the Electoral College also argue it creates an opening for potentially messy scenarios. An Electoral College tie, for example, would mean each state — no matter its population size —would each cast one vote to decide the race. 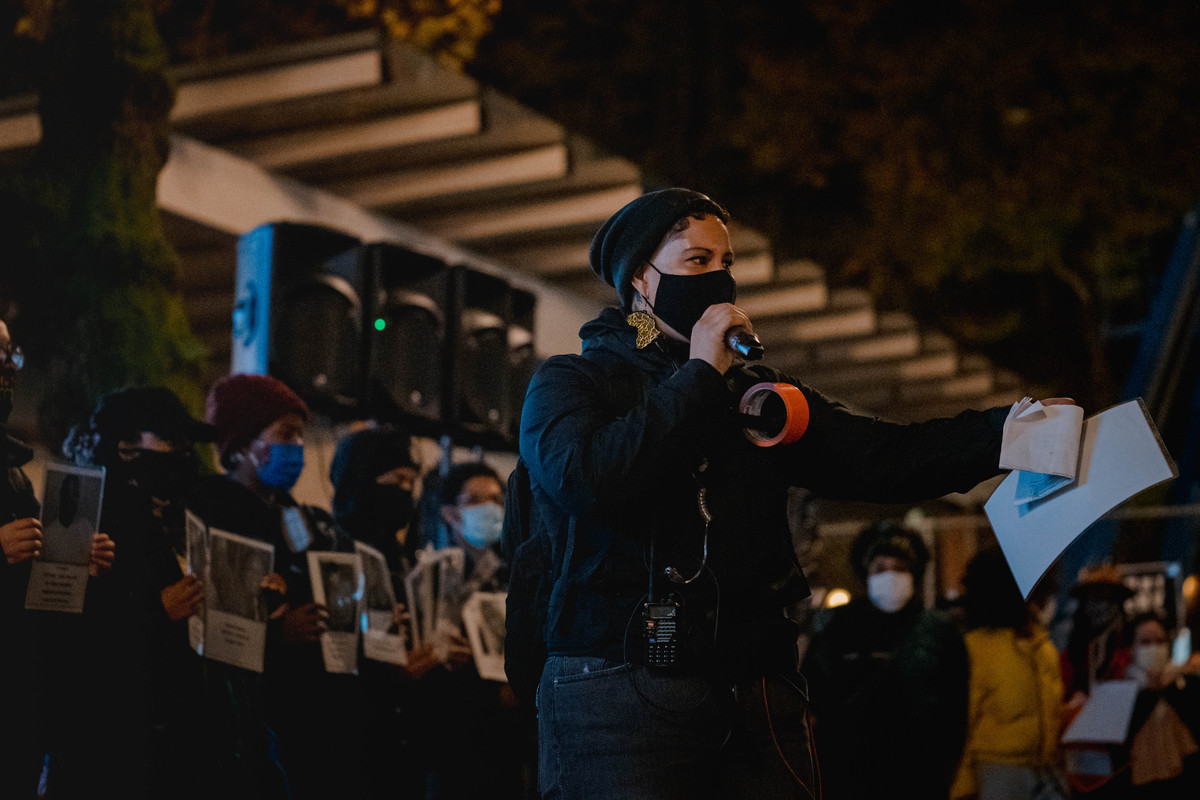 Nikkita Oliver at a rally at Occidental Park in Seattle, Wash., on Wednesday, Nov. 4, 2020, the night after 2020 Election Day. The demonstration was organized by a coalition of groups including Seattle Evening March, Morning March Seattle, Black Action Coalition, and the Engage Team. (Jovelle Tamayo for Crosscut)

Nikkita Oliver at a rally at Occidental Park in Seattle, Wash., on Wednesday, Nov. 4, 2020, the night after 2020 Election Day. The demonstration was organized by a coalition of groups including Seattle Evening March, Morning March Seattle, Black Action Coalition, and the Engage Team. (Jovelle Tamayo for Crosscut)

The most obvious but cumbersome way to tackle the Electoral College is through a constitutional amendment, which would require two-thirds approval from both chambers of Congress, as well as 75% of states.

The closest that came to happening was in 1970 when the House of Representatives voted overwhelmingly in favor of a constitutional amendment that would have abolished the Electoral College. The proposal failed in the Senate.

Some have proposed another solution: eliminating the winner-take-all approach in each state and instead awarding a proportional division of electoral votes to the presidential candidates. A candidate winning 38% of a state's vote would get 38% of that state's electoral votes. Employing that system, however, would also require a constitutional amendment.

Washington state is already a member of the leading proposal to solve the Electoral College dilemma: the National Popular Vote Interstate Compact. Under the compact, each state agrees to give its Electoral College votes to the winner of the popular vote.

King County Councilmember Joe McDermott helped pass legislation that made Washington state part of the compact back in 2009.

He said he still supports the movement.

“I think this is an eloquent way to address the issue,” McDermott said.

The compact would take effect only after enough states have joined to reach the 270 electoral votes needed to win the presidency. The National Popular Vote Interstate Compact is currently 74 electoral votes short of reaching that goal.

Kim Wyman, Washington’s secretary of state, said she worries about the consequences of enacting the compact.

“What if Donald Trump had won the popular vote, but lost the Electoral College?” Wyman asked. “We would tell the majority of voters in Washington state that, ‘Oh, you guys won, but we have to give our votes to the Republican Party because they won the popular vote?’”

Harvard's Keyssar said he agrees with that critique.

“There is a political scenario here, which is talked about quietly, which is get the compact somewhere close to 270, which will threaten chaos and then compel Congress to turn its attention to an amendment,” Keyssar added.

Some are convinced the compact can be in place within the next four years.

“We certainly believe it will pick up steam between now and 2024, just because we have a system that's crashing under its own weight,” said Pat Rosenstiel, a Trump supporter and a senior consultant with the National Popular Vote Interstate Compact.

“I am a card-carrying Republican, and I've supported Republican candidates for office my entire life, but I'm tired of the system where four out of five American voters are left on the political side,” Rosenstiel said, conceding that every state currently in the compact leans Democratic.

“I believe it's one of the most important social justice issues of our time right now,” he continued. “What should matter is that you're an American citizen and that you choose to participate on behalf of the candidate. You should see your vote go up on that board. You know what I mean?”