While the pandemic hampered in-person outreach efforts, census participation is on the rise among Native communities in Washington. 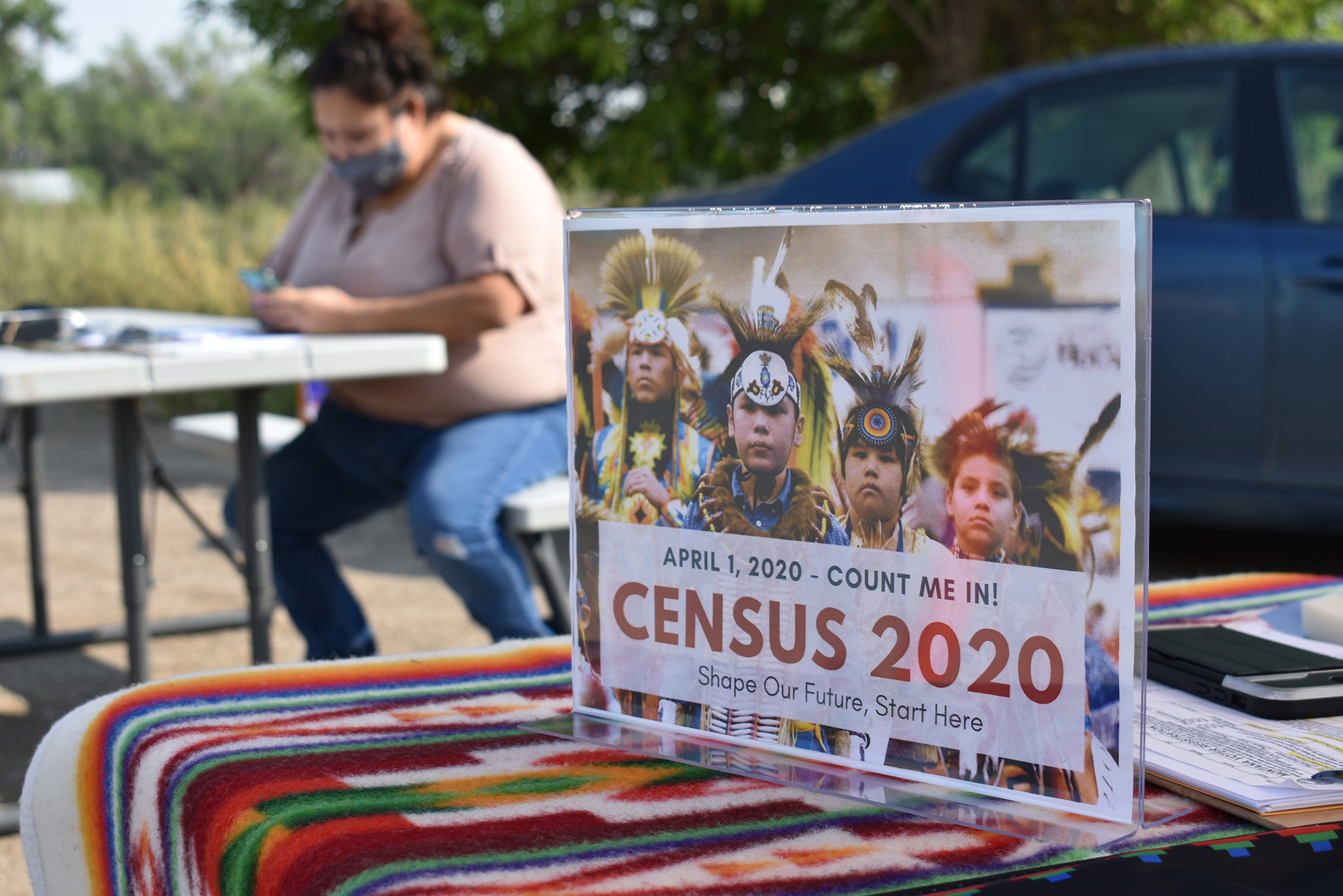 A sign promoting Native American participation in the U.S. census is displayed as Selena Rides Horse enters information into her phone on behalf of a member of the Crow Indian Tribe in Lodge Grass, Montana, Aug. 26, 2020. Native Americans make up less than 2% of the U.S. population and often are listed in datasets as "other" or denoted with an asterisk. Even as a product of surveys, the results can be considered statistically insignificant because the sample size isn't large enough, or the margin of error is too great to accurately reflect the population. The National Congress of American Indians has said there's a critical need for data that is accurate, meaningful and timely within tribal communities. (Matthew Brown/AP)

Last year was critical for Indian Country: On top of nationwide U.S. elections, the 2020 census provided a rare opportunity to address the historical undercounting of Native communities throughout the country.

But those in-person efforts came to a screeching halt once the coronavirus pandemic began during the spring. Fires on the reservation later in the year added further complications in reaching out to residents. The pandemic, Boyd says, set in at the same time that the team had planned to begin that outreach.

“This is something we’ve never dealt with,” he says. “To have to put everything on hold was a serious issue for us.”

Since the inception of the census, Native people have been among the most severely undercounted populations. In 2010, the U.S. Census Bureau estimated that American Indians and Alaska Natives living on reservations were undercounted by 4.9%. It’s more than double the next undercounted group, African Americans, at 2.1%.

That has big impacts: It makes it more difficult for undercounted communities to advocate for themselves, especially when seeking federal funding. Fawn Sharp, president of the Quinault Indian Nation, as well as the National Congress of American Indians, says righting the undercount was a serious focus for Native people nationwide. Preparations began years ahead of the census, as Native leaders planned how best to reach out to their communities.

“There was so much at stake in this census,” Sharp says. “By not having our numbers, not only are we failing in achieving the necessary federal funding to meet the basic needs and services of our communities, but also to have the proportionate and political voice — [one] that we simply have not been able to express.”

On the Colville Reservation, the self-response rate was 38.1% this year. But after in-person census taking, Boyd says the count reached 84.9% of reservation residents as opposed to the just under 30% total participation in 2010.

“A lot of it had to do with the internet or social media, getting information as best as we possibly could on those avenues,” Boyd says. “In prior years, fewer people were on those platforms, and now we’re able to reach out to younger people.”

But the internet can’t fix everything. Boyd added that many members still don’t have adequate access to the internet or phones (an issue seen throughout Indian Country), so in-person outreach remains an important piece in boosting census participation.

Alaina Capoeman (Quinault) says that in Washington, community outreach included hiring a team of tribal liaisons for the census; she is one herself. Liaisons were trained on the census in advance and then connected with tribes. They offered assistance and information, a job that typically requires a lot of in-person work.

Social distancing prevented some of the usual door-to-door and in-person work from happening early on, but Capoeman says liaisons eventually set up outside tents on reservations where they could hand out personal protective equipment and briefly talk to residents about the census. She says it helped that many liaisons, like herself, were from the communities they served and therefore familiar with them.

“We really focused on hiring people from the communities here,” she says. “I think that goes a long way with the trust.”

Boyd says that for the Colville Reservation, the census extension issued in September to provide an additional month before the deadline gave enough time to nearly double their participation numbers. In mid-September, census outreach workers known as “trusted messengers'' visited houses on the reservation that had yet to respond to the census in order to get them counted. The effort was originally supposed to begin earlier, Boyd adds, but it was delayed by the pandemic.

“That definitely had a big impact,” he says. “The deadline being pushed out was a way for us to get our resources out there, even at those last-second stops and homes that wouldn’t have normally been counted.”

Sharp says that given persistent barriers for census-taking in Native communities, she still expects to see a significant undercount of Native communities throughout the country, once census numbers are released. Even so, the efforts led by Native people this year are promising and, she says, part of the bigger picture in building up better data.

“We know that the impacts are going to be very real,” she says. “But with each census … we collect more data, and we improve our ability to count our citizens.”