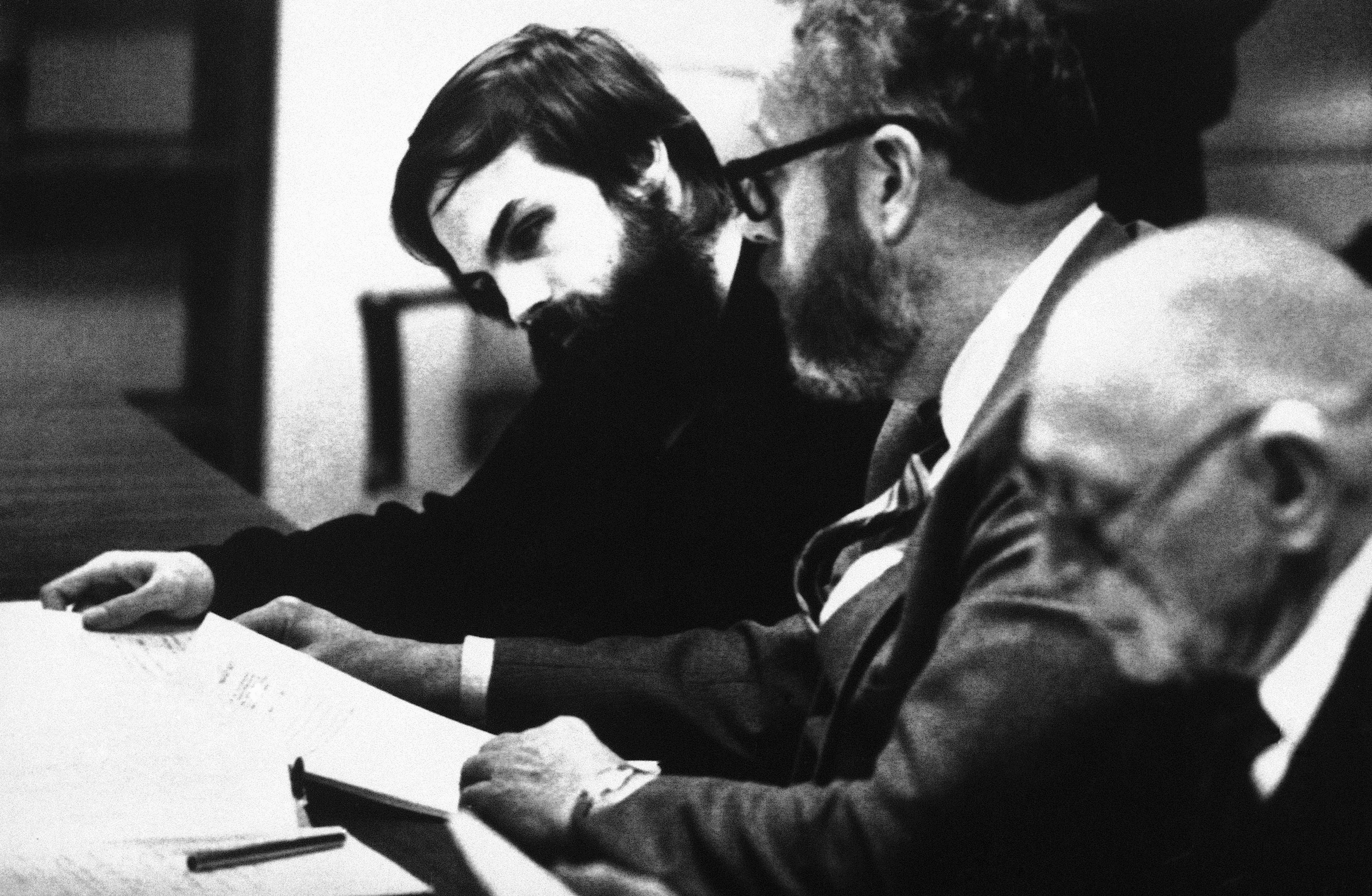 David L. Rice, 27, far left, sits with his attorneys Anthony Savage and Bill Lanning during his trial for the murders of Charles Goldmark and his family on Seattle, May 13, 1986. (AP Photo)

The hammer attack on Paul Pelosi, husband of Speaker of the U.S. House of Representatives Nancy Pelosi, is a reminder that words have consequences.

It is an especially painful reminder for those of us in Seattle in the mid-1980s, when an assault on a prominent attorney and his family on Christmas Eve 1985 ended in brutal tragedy. As happened in the Pelosi case, the attack on the Goldmarks followed a history of extreme political accusations.

The story begins in the early 1960s when a rancher in Okanogan County who served in the Legislature as a Democrat was accused of being a communist. John Goldmark and his wife Sally had moved to the area after World War II to start a new life in the West. John got into politics. A HistoryLink article describes him as “a surprising hybrid: A tough-as-nails rancher with a crew cut, cowboy boots and a Harvard Law degree.” Sally had joined the Communist Party in the 1930s during the Depression but had grown disillusioned and quit.

Despite success and three terms as a representative, Goldmark and his wife came under attack from two newspapers, The Vigilante in Spokane and the Tonasket Tribune, which called Goldmark “a tool of a monstrous conspiracy to remake America into a totalitarian state which would throttle freedom and crush individual initiative.”

The Goldmarks became targets of a far-right fever dream that contributed to Goldmark's loss in his bid for re-election. The Goldmarks filed a libel suit against the newspapers and others who attacked them, including former state Rep. Albert Canwell, who had led the Legislature’s red-hunting committee in the late 1940s.

The Goldmarks won their suit but lost on appeal. They were vindicated by the courts and found not to be communists, but the libel case didn’t meet the standard of actual malice. The Goldmarks felt they’d won a moral victory, but Goldmark’s accusers also claimed vindication.

By the 1980s, this was all ancient history for most folks. But not for some. People in far-right circles still talked about the Goldmarks, and the dangers they supposedly posed to American society were passed down by word-of-mouth.

David Lewis Rice was a young man, an itinerant, sometimes sleeping in cars or couch-surfing. He suffered from paranoid delusions at times. He lived in Seattle and circulated among far-right political enthusiasts. One group he visited was the ultra-conservative Duck Club. It was here, he later said, that he heard about the “Jewish” Goldmarks and their communism. Rice’s focus fell on Charles Goldmark, the late John Goldmark’s grown son, who was a prominent Seattle attorney and active in Democratic politics.

On Christmas Eve 1985, Rice knocked on the door of the Goldmark family in Madrona posing as a cab driver making a delivery. His plan, he said, was to get Charles Goldmark to confess to his political sins and the conspiracy to take over America. He conflated the accusations against the father with those against the son, and apparently did not realize that the Goldmarks were neither communists nor Jewish, not that being either was justification for his actions.

Interrupting the family’s plans to host a Christmas dinner with friends, Rice handcuffed, chloroformed and then stabbed and beat with a steam iron Charles, wife Annie, and their two young sons, Colin, 10, and Derek, 12. Annie died immediately; the other three lingered for a time, but all died.

Rice fled, but soon confessed, writing before his arrest that he'd knocked off the area's leader of the communist conspiracy. He’d left plenty of evidence behind. Rice is currently serving a life sentence in Walla Walla.

The impact on Seattle was profound shock and grief. Writing in The Washington Post in 1986, Bill Prochnau captured the mood: “Seattle prides itself as one of the country's most livable cities, a place where people come to escape eastern problems, from pollution to crime, a place where many prominent citizens still list their phone numbers and addresses in the telephone book. The Christmas Eve killings blew that illusion away.”

The lesson for many people also had to do with the lurking dangers — and immediate ones — of extreme speech. Today, such speech has oozed out for the far conspiratorial political extremes into our mainstream politics. Antisemitism is on the rise, hate speech is routine, ordinary citizens are accused of being in league with Satan.

For some, it’s just blowing off steam with a socialmedia megaphone. For others, it’s a call to action.

This seems to be the case with the Pelosis, where a young man at the margins, apparently fueled by Q and right-wing conspiracies, seeks to attack Nancy, who is not home, and then bashes her husband Paul with a hammer in their San Francisco home.

Violence and extreme rhetoric has become normalized; action, for some, follows. The impact of lies and extreme accusations can reverberate for decades, down through the generations, sometimes fatally.

A starting point to stop the madness is honoring the truth and respecting the power of our words.