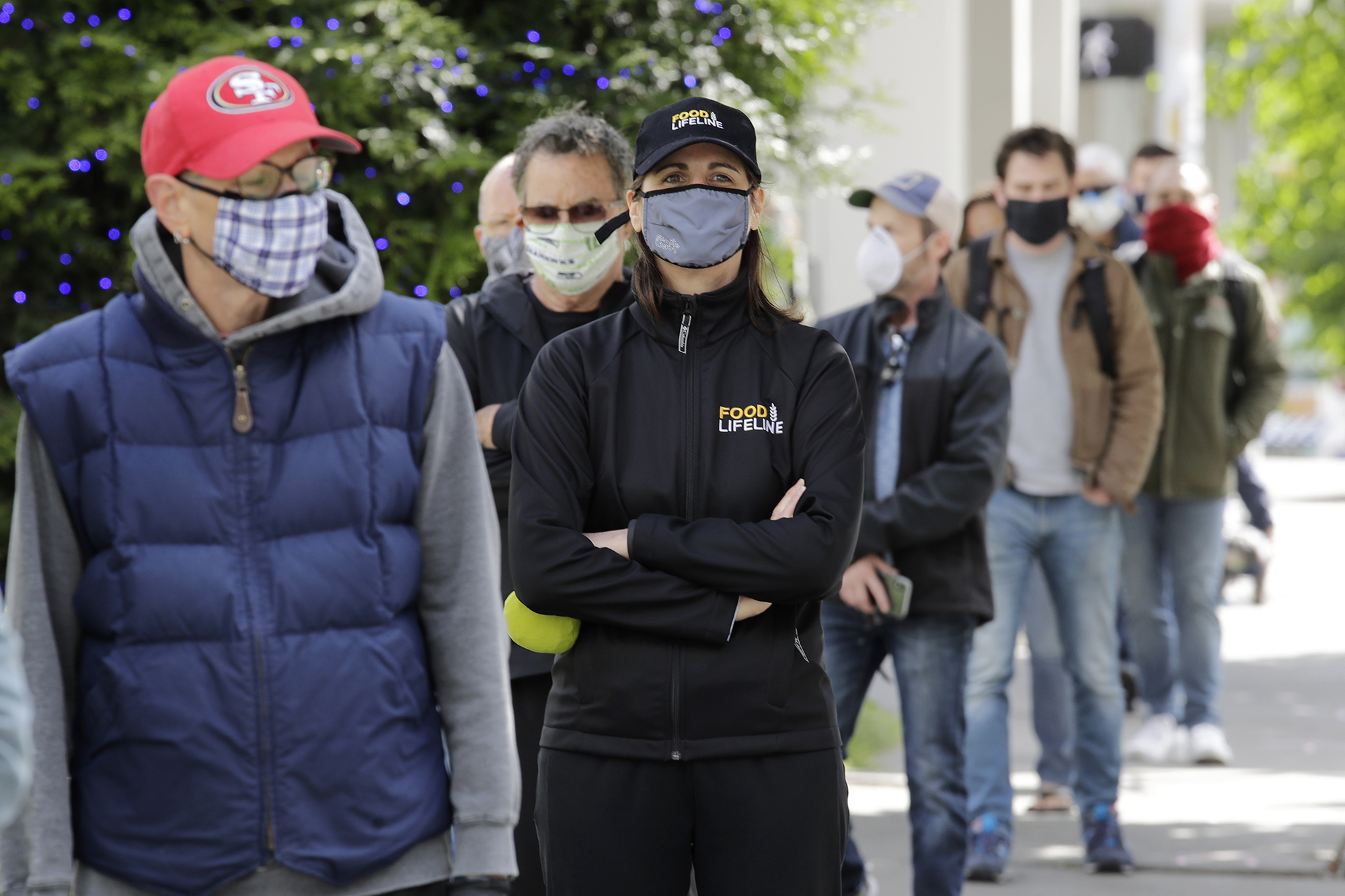 A line of customers wearing protective masks waits to enter the West Seattle Farmers Market, May 3, 2020. The line extends around the block during the market's first opening in nearly two months because of the coronavirus outbreak. (Elaine Thompson/AP)

A majority of Washingtonians believe the recent uptick in coronavirus cases means the state should pull back or pause its reopening plans, according to results from a new Crosscut/Elway Poll.

When asked how the government should respond, 26% of those surveyed for the statewide poll said Washington should reimpose restrictions to control the spread of the virus. Thirty-three percent said the reopening should pause to see what develops, while 38% said they believe Washington should continue reopening its economy. Just 3% of registered voters interviewed between July 11 and 15 said they had no opinion on reopening.

Viewpoints on this topic were sharply divided between those who identified themselves as Democrats and those who called themselves Republicans, as well as between people who live in urban or suburban communities and those from rural parts of the state.

While 72% of the Democrats in the random sample said either reopening should pause or restrictions should be reimposed, 23% of Republicans said the state should at least freeze its reopening process. Only 23% of urban voters and 37% of suburban voters thought it was a good idea to continue reopening, while 48% of small town and rural voters felt that way. The poll has a sampling error of plus or minus 5% at a 95% level of confidence, which means that if the survey had been conducted 100 times, the results would be within 5 percentage points of the results reported here at least 95 times.

The previous Crosscut/Elway Poll in April found 76% of voters believed the pandemic restrictions were working, and 61% were concerned about lifting them too soon. Only 17% of those polled in April disagreed, saying the danger was exaggerated in the first place and most of the restrictions were not needed.

The survey results also may reflect the geographic spread of coronavirus across the state, because urban centers and their surrounding suburbs have seen the most COVID-19 cases and deaths. Because they have seen fewer coronavirus cases, many rural and small town communities have reopened more quickly in the county-by-county process. The latest numbers from Washington state show King, Yakima and Snohomish counties — all home to urban centers — have the most confirmed coronavirus cases, as well as the most hospitalizations and deaths. The next most affected counties — Pierce, Benton, Franklin, Spokane and Clark — also include most of the rest of state’s biggest population centers. 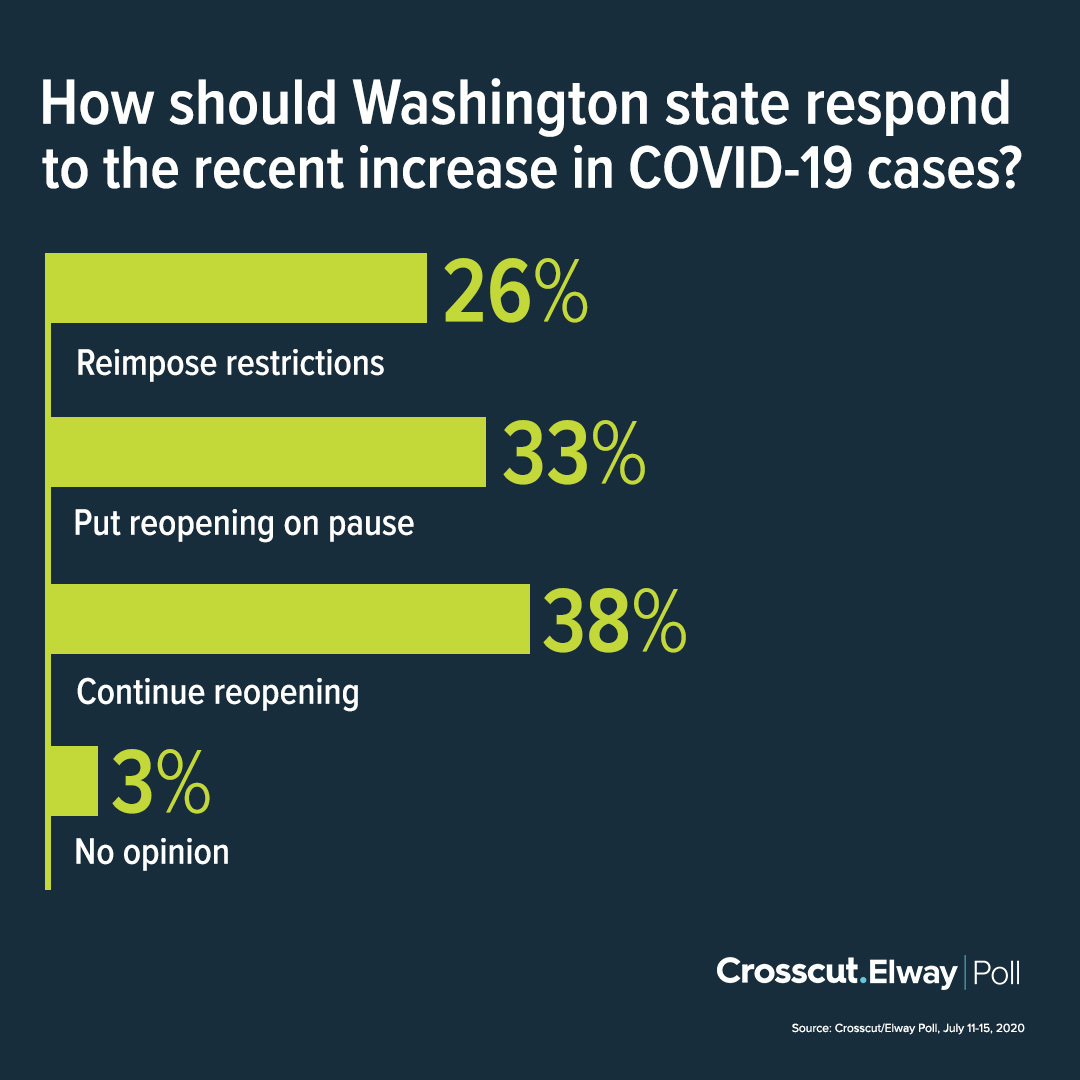 The Washington Department of Health reported the 7-day average of confirmed new COVID-19 cases across the state was 617 a day, as of July 15, which is almost twice as high as the peak of about 360 cases a day on average in late March. Nearly 48,000 Washingtonians have contracted coronavirus and 1,453 people have died as of July 19.

Last week, Gov. Jay Inslee announced a step back from reopening in some places, with new restrictions beginning this week on how many people are allowed at social gatherings. Last week, the governor also paused reopening statewide, saying no county would advance to a new phase in the state's Safe Start reopening plan, at least through July 28.

Although rhetoric on social media about mask usage seems to fall along party lines, most people who responded to the Crosscut/Elway Poll said they were wearing masks whenever they are out in public and can’t keep a 6-foot distance between themselves and others. The poll found 74% of people across the state wear a mask whenever they leave the house or when they are out and cannot keep a distance. Nearly all Democrats said they wear a mask under those conditions; while 53% of Republicans do and so do 64% of those who identified themselves as independents.

Only 10% of Republicans and 5% of independents said they never wear a mask.

Carolyn Saunders, a retired medical office assistant and community college instructor from Skagit County who participated in the poll, said she always wears a mask when she goes out. The Republican, who says she plans to vote for Loren Culp in the primary for governor, lives in a multigenerational home in the small town of Burlington.

Saunders said her grandson caught coronavirus while attending a party at the end of June with about 30 other young people, who also came down with the virus. Still, she does not believe Washington should slow down reopening the economy, even though the state has seen a sharp increase in coronavirus cases lately.

“We can’t completely stay shut down,” said Saunders, 79, whose family is squarely in the category of people for whom getting COVID-19 could be dangerous. She is battling cancer, has a husband on home dialysis and has a daughter who is diabetic. “Our economy will completely fall apart if we do that,” she said.

Saunders said her opinion is partly based on a lifetime of experience facing polio and a series of serious flu epidemics. Being cautious is a good idea, said Saunders, whose own family has stopped gathering, but the government response needs to be more nuanced, in her opinion, since much of the country has had very limited contact with the virus.

“To completely shut down everything would have been foolish,” she said. “We have to deal with it.” When asked about Inslee's handling of the pandemic, Saunders gave the governor poor marks, mostly because she felt he has been too political in his statements.

One surprising result of the July poll was how little impact a personal experience with COVID-19 seems to have on choices concerning reopening the state. Nearly as much as party affiliation, age seems to have the most influence on choices over whether to wear a mask, with older adults making that decision more often than younger people. This might illustrate a lack of understanding of the value of wearing a mask, since they are more effective at protecting others than from keeping coronavirus away from the mask wearer.

To stop the spread of the virus, epidemiologists have strongly encouraged people to wear a mask while out in public when they cannot stay 6 feet away from others. Scientists believe the virus can spread even when the person with COVID-19 has no symptoms.

Toby Jarman, 50, a teacher in Seattle Public Schools, says she became more serious about wearing a mask after a friend who lives on the East Coast became very sick with the coronavirus, and after the sister of a student came down with the virus.

“I didn’t want to believe it as first. I remember the big scare over H1N1. I was very skeptical at first,” she said comparing COVID-19 with her experience during the 2009 flu pandemic. “My students’ older sibling really was the wake-up call. He was a young man, didn’t fit the risk profile and was hospitalized and on a respirator.”

Her two close experiences with the coronavirus both happened before schools were closed in March. Their stories made her realize COVID-19 was a lot worse than most people knew. Jarman, a Democrat, now believes reopening the economy should be paused. She says the governor has done an excellent job handling the pandemic and plans to vote to reelect him for a third term.

“I just appreciate his tone and how he walks the line between being warm and also firm,” Jarman said, adding that she’s nervous about the possibility of reopening schools in the fall. But she trusts Inslee and Superintendent of Public Instruction Chris Reykdal and says if they believe schools can reopen safety, she will follow their lead.