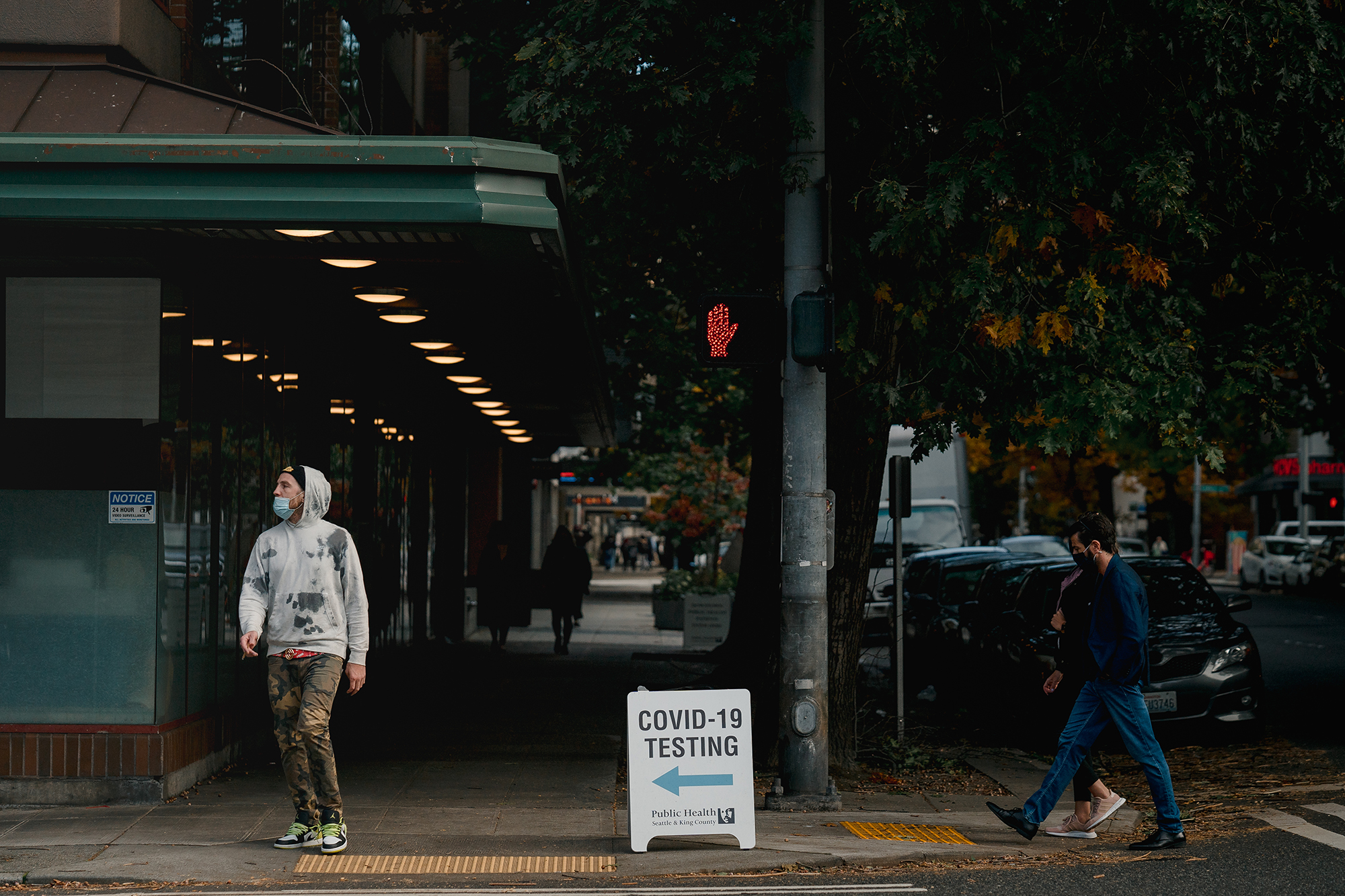 With an uncertain holiday season nearly upon us, dangerous pandemic trends in King County and throughout the state — coupled with no new health restrictions or state financial support to those most vulnerable to the spread of disease — could make celebrating in any capacity especially risky this year.

COVID-19 positivity rates* in King County are surpassing case highs seen in the spring. The number of daily reported positive COVID-19 cases has trended upwards in King County since late September, and since the end of October those rates have doubled. According to Dr. Jeff Duchin, health officer with Public Health — Seattle & King County, hospitalization rates in King County rose 30% over the past week.

In a chilling and familiar summary, Duchin says, “COVID-19 is a viral wildfire, and we are the fuel.”

With the surge showing no sign of slowing down, local epidemiologists and medical professionals are now declaring that the third wave of the pandemic has arrived, following a first wave in the spring and a second in the summer.

Health officers don’t make game-day decisions when weighing whether to reverse course on “reopening” Washington counties to business, socializing, and other aspects of daily life ⁠— that’s up to Gov. Jay Inslee. In a televised address on Thursday, Inslee encouraged Washingtonians to rethink their holiday plans. The governor has not yet reintroduced mandatory restrictions on social gatherings, although further measures to reduce the spread of the virus are expected to be announced over the next few days. Health officials are hoping that Washingtonians will voluntarily comply with social distancing directives and not gather with others whom they don’t already live with.

At a press conference Tuesday, Inslee’s chief of staff, David Postman, said, the governor “doesn’t have some secret plan in his pocket. This is the plan.”

"We know that holidays create problems,” Postman said. “Thanksgiving, Christmas, those are the holidays where people pack their houses full of people. That can't happen this year.”

On Friday morning, Inslee tiptoed toward enforcing that, issuing a request to anyone entering the state to voluntarily quarantine for 14 days, while asking locals to (also voluntarily) stay local.

The trend is pronounced enough that Washington medical experts and officials from across the state, including Public Health’s Duchin, issued requests for pandemic vigilance with an underlying message of this being their final request before more restrictions are put in place.

“We're at a point that if we cannot change the current trajectory of disease by changing our behaviors, we'll need to take actions that will hurt our economy, and no one wants to do that again,” says Dr. Kathy Lofy of the Washington Department of Health.

Where is the wave?

While the entire state of Washington is suffering spikes in COVID-19 cases, Lofy says surges are most pronounced in Western Washington, particularly in King County. Positive test results are now more highly concentrated across South King County — spanning urban and suburban areas, including Tukwila and Auburn, as well as rural spots like Enumclaw — than they were in previous waves.

“This is not due to increased testing,” Lofy says. “This is a real increase in disease.”

More people in King County were recorded as testing positive on Nov. 5, than on any other single day this year — and that number could go up, because the county’s most recent data is still incomplete.

“We should probably all stop socializing for the next several weeks to try to slow down the disease that's rapidly spreading,” Lofy says.

King County’s crests have looked different from Seattle’s, because the virus takes time to move and has reached different pockets of the county at different speeds. Previous countywide highs occurred on April 1 and July 23, when the urban and suburban parts of South King County saw cases rise dramatically, but rural parts of the county were still comparatively virus-free.

Those positive cases don’t necessarily lead to hospitalizations or deaths, but knowing where people test positive can give us a decent idea of where the virus is spreading fastest.

County’s experience by the numbers

OK, a breath: The county has been keeping track of this kind of data since late March, so we can learn some things from the stats so far.

As of this writing, 32,570 people in King County have tested positive for the virus since all this started. Considering that as of last year’s census estimate there were about 2.253 million people living in the county. That comes out to just over 1.4% of all King County residents testing positive.

COVID-19 positivity rates are currently increasing across every age group, but earlier in the year, different age groups caught the virus at different rates. The two groups that have caught COVID-19 most frequently in King County so far are people over the age of 80 and those between 20 and 29. Large outbreaks among groups of people who mostly associate with others their age — like the outbreaks that happened in long-term care facilities in the spring and those associated with the Greek system at the University of Washington in early fall — have contributed to those higher rates.

Nearly two-thirds (61.9%) of all the people in King County who have died from COVID-19 since May have been associated with a long-term care facility — as a resident, an employee or a visitor. That translates to 511 people, most of whom died between late March and mid-April. There was a second surge in cases in long-term care facilities in midsummer, which led to an uptick in deaths during the first week of August.

So far, 685 people experiencing homelessness in King County have tested positive for COVID-19 this year. That’s 2.1% of all the cases in the county, and about half of those instances have been linked to outbreaks of the virus at emergency shelters.

The data listed in this section have all been at the King County level, and may or may not reflect what’s going on closer to you, since every city is experiencing COVID-19 a little differently. But all demographic data (showing COVID-19 rates by race, age and sex) is available at a city level, too, and can be accessed here, going to the "Demographics" tab and changing the drop-down menu from “All King County” to whatever city you’re interested in.

What to watch for

While a number of White House weekly reports to states this week noted that testing of people without symptoms is essential to getting the virus under control, King County’s testing situation is not keeping up with rising need. The county’s goal is that for every test that’s positive, 50 or more come back negative — that’s the benchmark for whether there’s enough testing happening to catch the spread. Right now, one in every 17 tests is coming back positive.

However, experts noted during Tuesday’s press conference a few areas of concern that they will monitor when making restrictive decisions. One important variable to them is hospital capacity.

“Since our case counts are accelerating, I'm afraid that our hospitalizations will soon accelerate as well and overwhelm our health care system,” Lofy says. COVID-19 hospitalizations have indeed been rising, and some hospitals are already making adjustments to prepare for another wave of patients. The UW Medical Center’s northwest campus recently rededicated an entire floor to exclusively caring for COVID-19 patients after months without one. This creates a ripple effect, as hospitals then lose space to treat other serious medical conditions, like heart attacks, strokes or cancer.

Medical professionals say they look at the King County COVID-19 dashboards daily, and that they’ve learned from past peaks and surges what they needed to do to best prepare for this one. But even a better understanding of the virus doesn’t mean there isn’t extreme stress on staff.

“There has never been a day that has not felt overwhelming,” says Vanessa Makarewicz, Harborview’s infection control manager. “It's always something new. Just when you think that you're like, OK, well, we got a handle on what our processes are around testing, or we got a handle around what our processes around PPE mitigation and conservation are, the next day COVID always hits you.”

Though medical workers are learning ways to conserve resources like masks, or even making their own face shields with 3D printers, that doesn’t address the mental and physical toll.

“If there is another pandemic, I said to someone today, ‘I'm tapping out,’ ” says Makarewicz. “I don’t know if I could do this again.”

Public Health's Duchin says his agency will spend the next few days in close contact with area hospitals to evaluate whether the wave is resulting in untenable hospitalization rates that exceed facility capacity.

Based on the data, Lofy expects to see increased deaths, which tend to lag behind increased hospitalizations, which themselves lag behind positive cases. At this point, elder care facilities are in their strictest lockdown scenarios.

Contact tracing as a tool is expected to be less effective as case numbers increase, given that tracers may reach a smaller proportion of people who’ve tested positive.

While case counts have risen dramatically, Public Health hasn’t hired more contact tracers since the first week of October. But that could soon change. On Tuesday, the county posted a job listing for more tracers, along with a note that it was looking to hire up to 30 additional tracers whose jobs could be expected to last through June 2021.

This month, with twice as many cases per contact tracer but the same number of hours in a contact tracer’s work day, people who test positive aren’t able to be contacted as quickly. For the week of Nov. 1, contact tracers interviewed 23% of cases the same day they were assigned. In August, they had been able to interview 66% of cases that first day.

Health officers have not yet mandated lockdowns for the holidays, but they recommend self-implemented ones. “We know that informal gatherings are contributing to spread already,” Lofy says. “Our neighbors in Canada celebrated their Thanksgiving about a month ago and saw large increases in cases following back. We cannot afford those in Washington state.”

Officials recognize that people likely won’t go cold turkey on socialization, and have offered guidelines for reducing exposure leading up to and during holiday gatherings: doing quarantines for two weeks leading up to a gathering, limiting holidays to members of the same household and, as a last resort, having gatherings outside and limited to five or fewer people you don’t live with.

“We know that folks are done with COVID and looking forward to the holidays, but COVID isn't yet done with us,” Lofy says.

Update: This article was updated at 9:09 a.m. on November 13, 2020, to reflect new information about Inslee making a 14-day quarantine request.