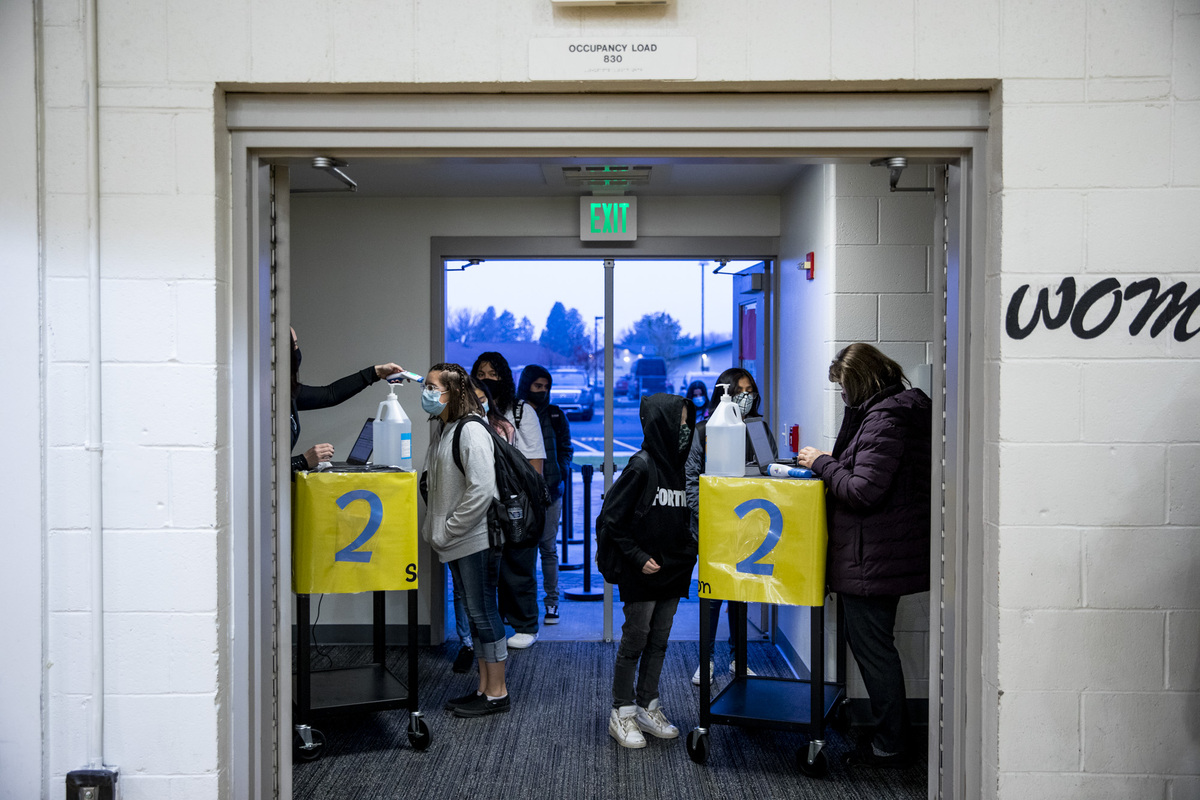 As school districts across the state scramble to transition their classrooms safely from the online world back to the real world, they may benefit from the advice of the dozens of Washington districts that welcomed students back into their halls this past fall.

Gov. Jay Inslee recently encouraged school districts to work toward bringing elementary school students back to class this winter or spring as long as COVID-19 rates continue to decline. Currently, 116 districts across the state have already embarked into the uncharted territory of educating the state’s youth in person during the COVID-19 pandemic, according to school reopening data from the state’s Office of Superintendent of Public Instruction. Those districts have more than 50% of their students learning through some kind of hybrid online and in-person method.

District leaders said their relative success at in-person education during the pandemic stems from a mixture of luck, well-timed innovation, flexibility, determination and careful planning. Some also pointed to strong, consistent communication with their local public health officers as a critical element. But at the core of many superintendents’ advice was to embrace their own learning curve about how to run a school district during a pandemic.

This past fall, the Moses Lake School District, home to some 8,500 students in Central Washington, welcomed nearly a third of its elementary kids back to its campuses five days a week. Superintendent Joshua Meek acknowledged that the district had a leg up last March, when Inslee first shut down the state, since it had long worked technology into their school infrastructure.

“We were in a position both from a teaching and learning standpoint, but technology standpoint [too, so] we transitioned immediately to remote learning,” Meek said of the district’s transition to online learning last spring. “Every one of our students has a device.”

In 2018, the district began what it calls its one-on-one program, equipping all students third grade and up with their own laptops. During the 2020 spring semester, the district had ample time to adjust its approach to online learning, with the intention of bringing students back in the fall.

Over the summer, the staff troubleshooted different approaches that would meet OSPI recommendations. They decided to offer three options: fully remote classes, a traditional all-week schedule and a partial week mixed with online classes. Nearly a third of all students across the district naturally fell into each option. Giving students and parents a choice was a winning strategy.

“Like many places, this community has all sorts of beliefs, from all kids should just be in school, and we should pretend the coronavirus isn’t there or that kids aren’t infected by it to the opposite, that we should be in a full lockdown as a country,” Meek said. “Everybody loves to have their voice heard and have a choice, so hands down the parent choice option gave us a lot of opportunity.”

While the Moses Lake School District has been successful in bringing students back, Meek said it still weighs on him whether it was the right choice to push in-person learning for the benefit of the students, given he’s had to shut down some schools after an outbreak. But in the end he feels he made the right decision and urges districts not only to “believe that you can do it,” but to keep in close communication with everyone, from the school nurses to the community.

For the Ellensburg School District, about 70 miles west of Moses Lake, creativity and communication both seem to be tied to the district’s success at combining online and in person learning. Ellensburg has a truly hybrid model, with students split into two schedule groups and each attending school in person on different days.

The district eased into school in the fall by first phasing in higher-need students beginning on Sept. 9 and bringing everyone else back in October.

During the planning and decision process, Ellensburg Superintendent Jinger Haberer held listening Zoom sessions that attracted as many as 200 participants. Hearing directly from the community helped Haberer decide to offer hybrid classes.

Communication with parents wasn’t the only important way the district needed to build solid relationships. Haberer notes that having a strong partnership with her local public health officer, Dr. Mark Larson from the Kittitas County Public Health Department, has been tremendously helpful.

“I talk to him at least two or three times a week; If I send him an email saying, ‘Hey, I’d like to talk to you,’ we talk,” Haberer said, adding that she keeps track of all possible school outbreaks, touching base with Larson and being transparent about it with parents. So far, only two coronavirus cases have been traced back to a school campus. 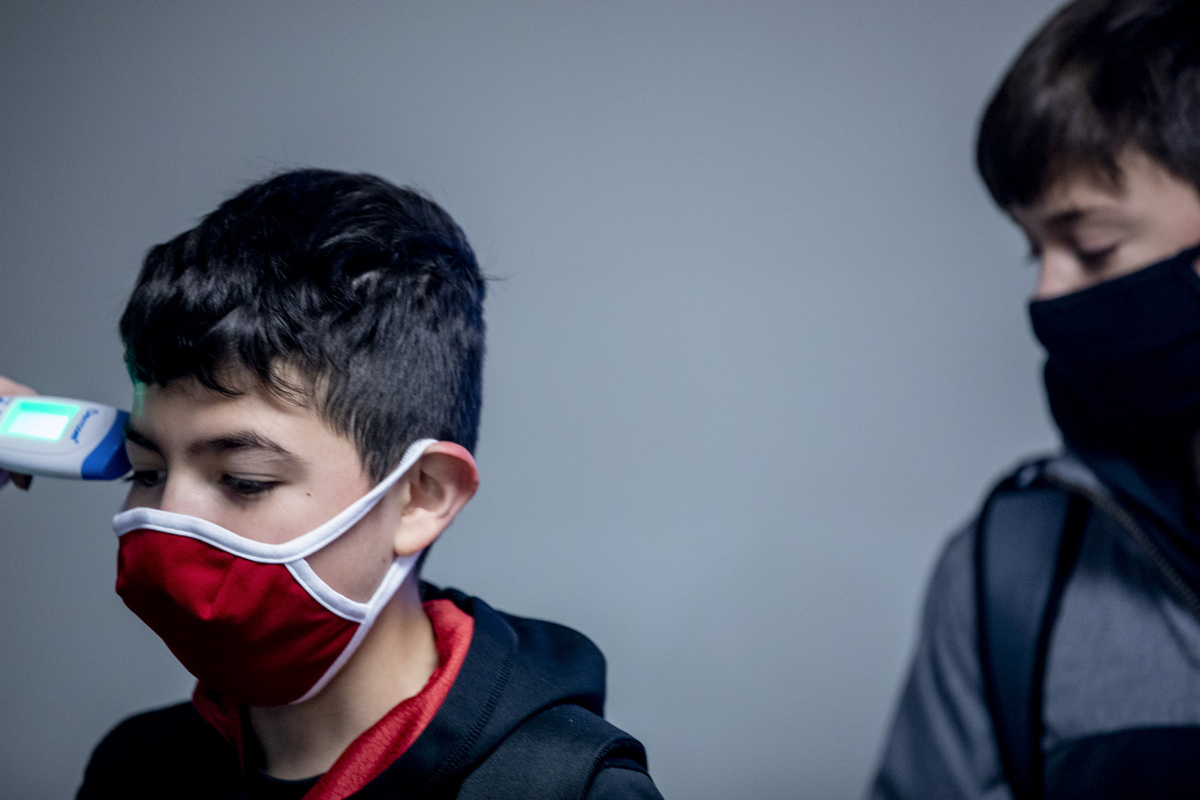 At Ellensburg schools and many of the other hybrid districts, wearing masks, hand-washing, temperature checks and prior digital acknowledgment that a student or family member has not shown COVID-19 symptoms before attending class have helped reduce any on-site infections, Haberer believes.

“You hear a lot in the media about ‘the lost year,’ — that’s not going to happen,” Haberer said. “We are determined and have hope and confidence in our people that we will succeed in providing support and seeing our students thrive.”

Students also play a major role in keeping schools COVID-safe by following guidelines set by schools and local health departments. When Selah School District students returned to school in the district, about 40 miles south of Ellensburg, in October, Superintendent Shane Backlund felt proud of their resilience and ability to follow protocols.

“I would say my colleagues that have had kids in session for some time would agree with me: The kids have fallen right into a routine,” Backlund said. “Kids have just adapted really well, and they really love to be at school. We’ve found that once something has been taken away from you like that, kids, especially K-8, are exceptionally happy to be back.”

As districts have adapted and adjusted to the pandemic, as with anything, they’ve sometimes run into growing pains and have had to problem-solve. Backlund is blunt about the answer: “We just have to be flexible.”

Backlund said success is a result of a multilayered … “swiss cheese” plan, from communication, to working with families and students, to having everyone wear masks and wash their hands and staying home if they feel sick.

“There’s probably improper mask wearing, there’s probably not the best hand-washing every time, some kids are probably not going to socially distance as well as others, you might miss a kid by attestation screening. But when you layer all those together, you’re able to really provide a safe environment,” he said.

Sometimes flexibility just looks like improvising. Right before school started in the East Valley School District in Spokane, Superintendent Kelly Shea recalls how multiple bus drivers had to quarantine because of a coronavirus exposure. That left the district with too few drivers to pick up students based on the newly adjusted bus route schedule. On top of that challenge, all buses were limited by the virus to carrying 20 students rather than the usual 60.

“We had to scramble very quickly to either find enough drivers or run buses twice,” he said. They decided to have drivers run their buses out, pick up some kids and drop them off at school and then turn right around and do it again.

The Kennewick School District, which educates more than 19,000 students about 80 miles southeast of Yakima, clocks in as one of the largest school districts holding in-person classes this year. Superintendent Traci Pierce estimated that nearly half of all the students, mostly kindergarten through fifth grade, are on campus part-time. In February, the district plans to phase in middle and high school students for hybrid learning. Currently, the school offers hybrid and remote learning, as well as an all-online academy.

None of it has been easy, especially the fast timeline for implementation, Pierce acknowledged.

“It’s certainly not perfect. I think there's no replacement for in-person learning for students, but our staff has done a really good job of making the shift and trying to do the best that we can for our students,” she said.

The Kennewick School District follows a split-schedule model similar to the Ellensburg School District, bringing in two groups of students onto campus on different days. Pierce said the district has also collaborated closely with neighboring districts, Pasco and Richland. On top of doing internal safety investigations, the districts have all worked with external safety experts to provide families with an extra layer of assurance.

That assurance has possibly encouraged some parents to let their kids return to campus. Pierce said students and families have the option to transition from remote learning to hybrid learning. Similarly, the Moses Lake School District is also allowing parents to send their students back to campus after starting the year remote.

For other superintendents on the same path, Pierce said she thinks districts should feel confident about bringing students back to class, so long as they follow all the state and OSPI guidelines.

“I’m involved in networking calls with all of our superintendents in this region…. I don’t think there’s anything I’m saying that isn’t already being considered and done by every district across the state,” she said.

This story previously referenced the East Valley School District southeast of Yakima, instead of the one in Spokane.