The move by the King County Board of Health comes after a Crosscut report showing disproportionate enforcement toward homeless people. 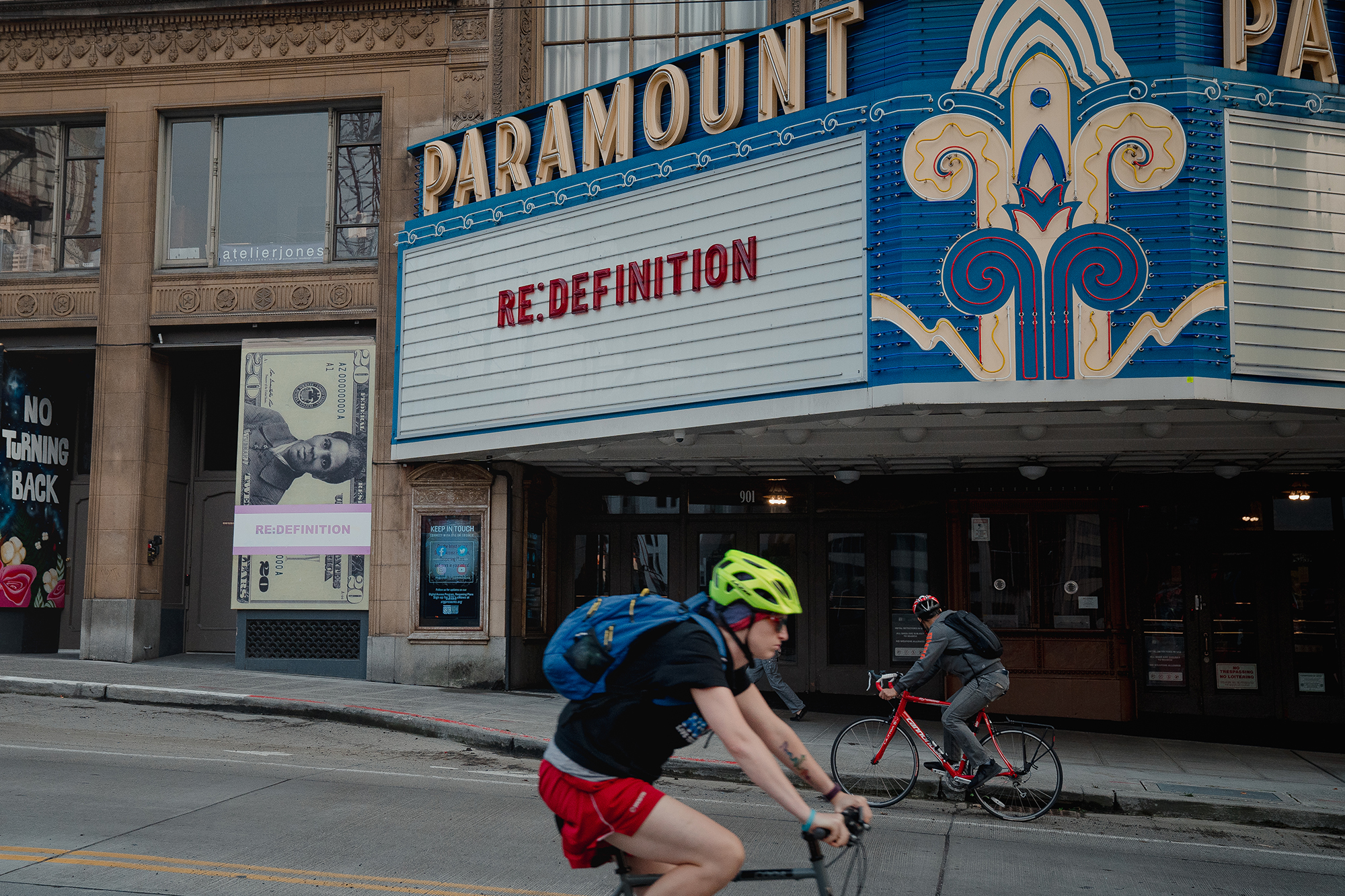 Cyclists bike past the Paramount Theatre, an arts venue in Seattle, on Sept. 30, 2020. (Jovelle Tamayo for Crosscut)

The King County Board of Health will reexamine its nearly 30-year-old law requiring bicyclists to wear helmets, raising the possibility that the rule could be repealed in the face of new evidence that it isn’t enforced equitably.

Members of the board, made up of both county and city officials, voted Thursday to add reconsideration of the 1993 law to its 2021 work plan. Board member and King County Councilmember Jeanne Kohl-Welles, who brought the amendment forward, said she was not presupposing that the law be rolled back, but wanted to look more deeply at the data around its enforcement. While she has supported the law in the past, she said apparent disparities in its enforcement have concerned her.

“I think this is important,” she said. “I think we could have a robust conversation with all of the cards on the table to assist us as a body in considering a new direction in helmet enforcement, not the helmet law per se.”

Other members, however, expressed more willingness to entertain a full repeal from the start. Board member and Seattle City Councilmember Andrew Lewis said he wanted to further examine whether the law had led to any improved safety outcomes when compared with jurisdictions without a health law.

“If it does come back that this rule is not an effective deterrent, I don’t see why we should have it on the books,” he said.

The law was not previously a priority for the board — which has primarily busied itself recently with the COVID-19 response — but opted to take it up following new reporting from Crosscut, as well as Central Seattle Greenways.

In December, Crosscut found that, while Seattle police rarely enforce the law on city limits, the citations officers did write went to people struggling with homelessness at least nearly half the time. The data raised concerns that the officers’ goal was not to promote safety while riding, as the law intends, but as an opening to approach people living outside.

This concern materialized most clearly in 2019, when a homeless vendor for the Real Change newspaper was struck by a driver in a hit-and-run collision while he rode his bike. Officers then proceeded to write him a citation for not wearing a helmet. Real Change released an edited video of the incident as a form of activism.

In a separate study, Central Seattle Greenways, in partnership with Real Change and Cascade Bicycle Club, found that Black people were four times more likely as white people to be cited for not wearing a helmet.

The new reporting reframed the helmet law in the context of broader discussions taking place around law enforcement, public safety and race.

“I think this is connected to a broader conversation that we've been having in our nation, around the country and in King County locally that we need to find alternative ways and more effective ways of advancing public safety that don't involve police interaction unnecessarily,” said board member and King County Councilmember Girmay Zahilay.

King County passed its mandatory helmet law in 1993 and expanded it to include Seattle in 2003. Enforcement in recent years has been minimal. However, Crosscut found that, since 2017, at least 43% of citations have gone to people believed to be homeless at the time. Crosscut came to that number by comparing citations to other public records in which individuals listed homeless shelters as their permanent address or were identified as homeless in police reports and news stories.

In a statement to Crosscut at the time, Seattle police Sgt. Randall Huserik said, “The focus is the behavior, not the status. A risk of serious brain injury/death remains just as dire for someone experiencing homelessness as it does for someone who is housed — that is the risk these citations are intended to mitigate."

As to whether the stops are "pre-textual" — a means to stop someone in order to investigate an unrelated or more serious crime — Huserik said, "That is a nuanced, fact-specific, Fourth Amendment analysis for a court of law; to my knowledge, none of these stops or citations have been challenged on that ground, nor have any charges based on evidence discovered pursuant to a helmet-related stop been quashed on such grounds."

In fact, at least one criminal case was dismissed for just this reason. In 2019, a man who was living in a homeless encampment was stopped for not wearing a helmet and then charged with unlawful use of a weapon. The man's defense attorney argued the helmet law was used to make an unconstitutional stop. The judge agreed and tossed out the charges.

The tide may be turning on mandatory helmet laws, especially as their effectiveness is questioned and low-level citations receive more scrutiny for their role in an unequal criminal system. Locally, Tacoma recently repealed its mandatory helmet law amid fears of unequal enforcement toward Black people.

The Cascade Bicycle Club recently came out in favor of repealing the law. In a post on its website, the advocacy organization said it encouraged helmet use. “However, data shows that other public policies including safer street infrastructure, such as protected bike lanes, and reductions in vehicle speeds are more important for reducing injuries and deaths among people riding bikes,” the group said.