Providers want local governments to prescribe when and how police should be involved in mental health calls. 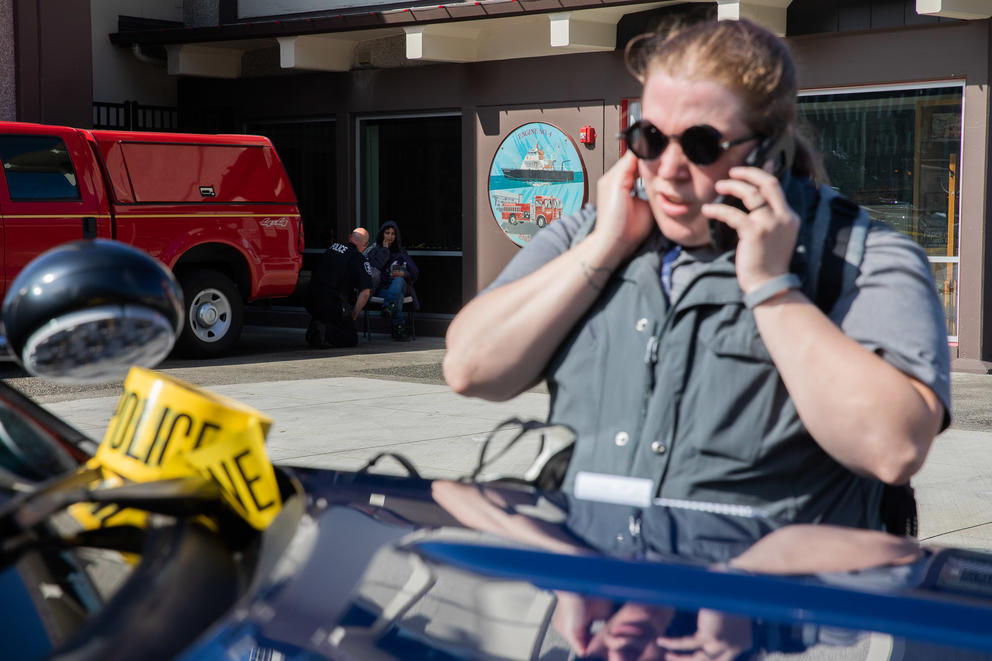 Mariah Andrignis, a social worker from the Downtown Emergency Service Center who contracts with Seattle Police Department to help with crisis response, speaks on the phone, while SPD Crisis Response Team Officer Sandlin Grayson and a witness speak to each other at the scene of a fatal stabbing in front of Seattle Fire Department's Station 5 along Alaskan Way in downtown Seattle, Aug. 6, 2020. (Matt M. McKnight/Crosscut)

It was a Saturday afternoon in September when Carlo Garcia decided he needed to call the police.

A shift lead with the jail diversion program CoLEAD, Garcia had watched as the mental health of a client, Donna, who was staying in a shelter provided by the program, had taken a turn for the worse. She had started to act out — hallucinating and knocking a gate off its hinges — and needed emergency treatment in a hospital. But it was unclear how to get her there safely without the help of law enforcement.

On the phone with a Seattle Police Department dispatcher, Garcia explained that this was a person in crisis. The staff was not seeking arrest, but instead wanted help with an involuntary commitment to the hospital.

Hours ticked by and no police arrived. Donna, a pseudonym, continued to slide deeper into a crisis, exacerbated by a missed dose of methadone earlier in the week. Staff members tried to calm the situation, but they were nervous about where she might go or what she might do next.

“Anything could have happened,” said Michelle McLendon, another shift lead with CoLEAD, who stepped in later that day. “She could have been in harm's way herself or a harm to others.”

CoLEAD’s experience with Donna has become an increasingly common one among service providers — in King County and across the state. At its root is the way in which law enforcement agencies are interpreting new statewide rules on using force (House Bill 1310). Since the law took effect in August, many service providers are  reporting a breakdown in managing people in severe crisis.

What was an already shaky response system has begun to crumble, they say, as law enforcement has pulled back from engaging.

In Seattle, police in August committed 45% fewer people to the hospital than was the norm during the previous four years — a trend that’s continuing into September, according to publicly available data from the police department.

Now, providers are ringing alarm bells. More than 20 King County service providers recently called for an “emergency summit” with city and county leaders, seeking clarity on what instructions those in law enforcement are receiving from police leadership, a legal analysis on the implications of the new state law and a plan for creating more alternatives to police. The providers’ goal is to produce short-, medium- and long-term solutions to this ballooning issue.

“Our community’s ability to adequately respond to behavioral health crisis events is itself in crisis, reads a letter from the providers addressed to Mayor Jenny Durkan and King County Executive Dow Constantine, as well as members of county and city councils and law enforcement agencies. “Without urgent action, people living with behavioral health conditions, the staff and organizations who care for them, and the community at large are at serious risk,” the letter continues.

Their call for a meeting was granted, with a summit set to take place Oct. 5.

The summit will occur at a time when Seattle and King County continue to wrestle with the role of police in society, a controversial and often rocky introspection following the mass protests of summer 2020.

One area of agreement that has emerged is that law enforcement need not play such an outsized role responding to noncriminal calls, especially during behavioral and mental health crises. But for service providers, the relationship with police is a complicated one; while many agree with the notion of removing police from the equation in theory, they struggle with its practical implications.

“We don’t want police to come in and inflame the situation,” said Flo Beauman, agency director of Catholic Housing Services of Western Washington, “But we also don’t want them to abandon staff who are being paid barely more than minimum wage while violent and scary people are not dealt with.”

Involuntary commitments are a last resort for service providers. They’re initiated only when individuals in crisis are found to be an immediate danger to themselves or others or are deemed “gravely disabled.”

People with two kinds of jobs are authorized to detain someone to bring that person to the hospital: designated crisis responders and the police.

Designated crisis responders, however, are so backlogged that it can often take them a week or more to respond. In the case of Donna, the service’s staff had sought and received authorization to commit her to the hospital days earlier, but were told they’d likely have to wait.

Historically, that delay has left the police as service providers’ only backup option, for better or worse.

“The avenues that we have, they're just insufficient,” said Dr. Cyn Kotarski, a physician with the Public Defender Association, the umbrella organization for CoLEAD.

“It’s just a tragedy to not be able to get someone the treatment that they need,” said Don Clayton, clinical director with Catholic Community Services. “That’s so hard to see.”

Sponsors and advocates of Washington’s new restrictions on police use of force say the legislative bill was never intended to prevent law enforcement from responding to mental health crises. Washington Attorney General Bob Ferguson agreed in a memo to lawmakers; Ferguson is due to issue a more formal interpretation next year.

But that hasn’t stopped many police departments from putting new limits on what sorts of calls their officers should respond to or how they should engage at the scene.

Interim Seattle Police Chief Adrian Diaz said he did not think the new law should prevent officers from responding. At the same time, when officers do respond, data shows that they’ve been notably less willing to detain someone for involuntary treatment — a trend that began in August and is acknowledged by high-ranking officials in the department.

“In light of 1310, it is definitely logical that officers are being more critical of when to engage a situation where force might get used to affect an ITA, though I have no definitive evidence of that,” Dr. Chris Fisher, chief strategy officer of  the Seattle Police Department, said in a message to members of the Seattle City Council earlier this month.

Seattle police did finally arrive to help with Donna at midnight — around 10 hours after the initial call. When they pulled up, they asked about the property damage, not the mental health crisis. By that point, the staff had managed to persuade Donna to get into an Uber to the hospital. It was a fortunate turn, made possible only by McLendon, the CoLEAD shift leader spending seven hours with Donna. But it easily could have gone in a different direction,the staff said.

“The fact that we were able to have Michelle be there for seven hours is highly unusual,” said Kotarski.

Whether the delay was directly related to the interpretation of the new state use of force law is unclear, although CoLEAD staff members said they have no memory of it ever being so difficult to get police to respond.

But this confusion is exactly why service providers are calling for a summit. Often, different police officers will have different interpretations of how they can and should respond.

“The issue is the breakdown in the system and how it’s being interpreted,” said Harold Wright of Pioneer Human Services. “We have different interpretations of how police are responding. I just think the leaders in the community need to understand this and have some clarity in how it’s being rolled out.”

Members of the Seattle City Council acknowledged and sympathized with service providers and expressed hope that a summit could produce more clarity.

“I totally agree and am aligned in the desire to get clarity on the intended impact of the state law and what the outcomes are for mental health engagements that are resulting from that intended impact,” Councilmember Lisa Herbold, chair of the council’s Public Safety Committee, said in a recent council meeting.

Meanwhile, both the council and the mayor are scrambling to show progress on standing up alternatives to policing. Mayor Jenny Durkan’s proposed budget includes $2 million to begin setting up “triage one,” a new path for dispatchers to send noncriminal calls away from armed officers. The city also has a collection of other mobile crisis and low acuity response teams. Yet none of it has been built to scale.

“We need no reminder as we walk around the city of Seattle,” said Councilmember Andrew Lewis, “that so many of our neighbors with undiagnosed or untreated behavioral health conditions are living without the support and access to care that they need to be successful.”