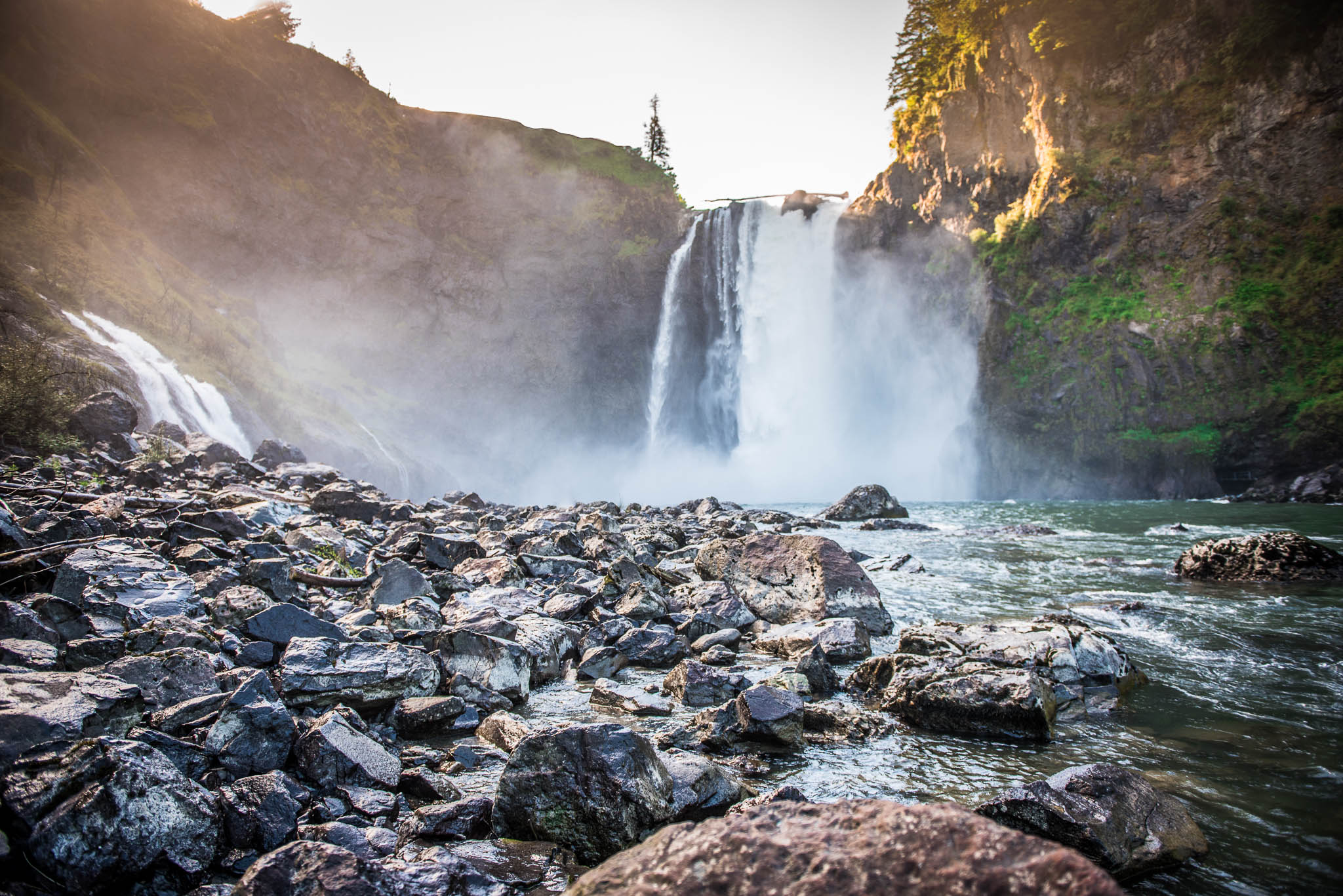 A view looking up at Snoqualmie Falls. (courtesy of the Snoqualmie Tribe)

An astonishing 1.5 to over 2 million people visit Snoqualmie Falls a year. With the increase in recreation and growing allure of Snoqualmie Falls, the tribe that considers this area sacred says the land is being “loved to death.”

The increase in recreation has resulted in the degradation of their ancestral lands, but one particularly loud intrusion – helicopter tours flying close to the falls – is a consistent disruption to their spiritual connection to the falls.

The falls are considered the Snoqualmie Tribe’s place of creation. It is where they gather to connect in ceremony and prayer to their ancestors and their creator. The noise of the helicopter tours make prayer incredibly difficult.

Billows of water stream down Snoqualmie Falls and erupt into a cloudy mist as it reaches the bottom of the 268 foot drop into the Snoqualmie river. The hiss of the falls is a soothing invitation to replenish mind, body and spirit in prayer and to convene with the generations of Snoqualmie people that came before.

Tribal leaders say low-flying helicopter tours are infringing on the rights of the Snoqualmie Tribe to practice their cultural beliefs and enjoy what is considered a sacred site.

“On a nice day, you'll see a taxi of helicopters or other smaller aircraft as they view the falls,” Christopher Castleberry, Snoqualmie tribal member, tribal council member and deputy secretary told Crosscut. “The start of summer is a very spiritual time where we take to the falls and we all try to visit there more often together, so it's super inconvenient that their peak season is the time that we're trying to be there together.” 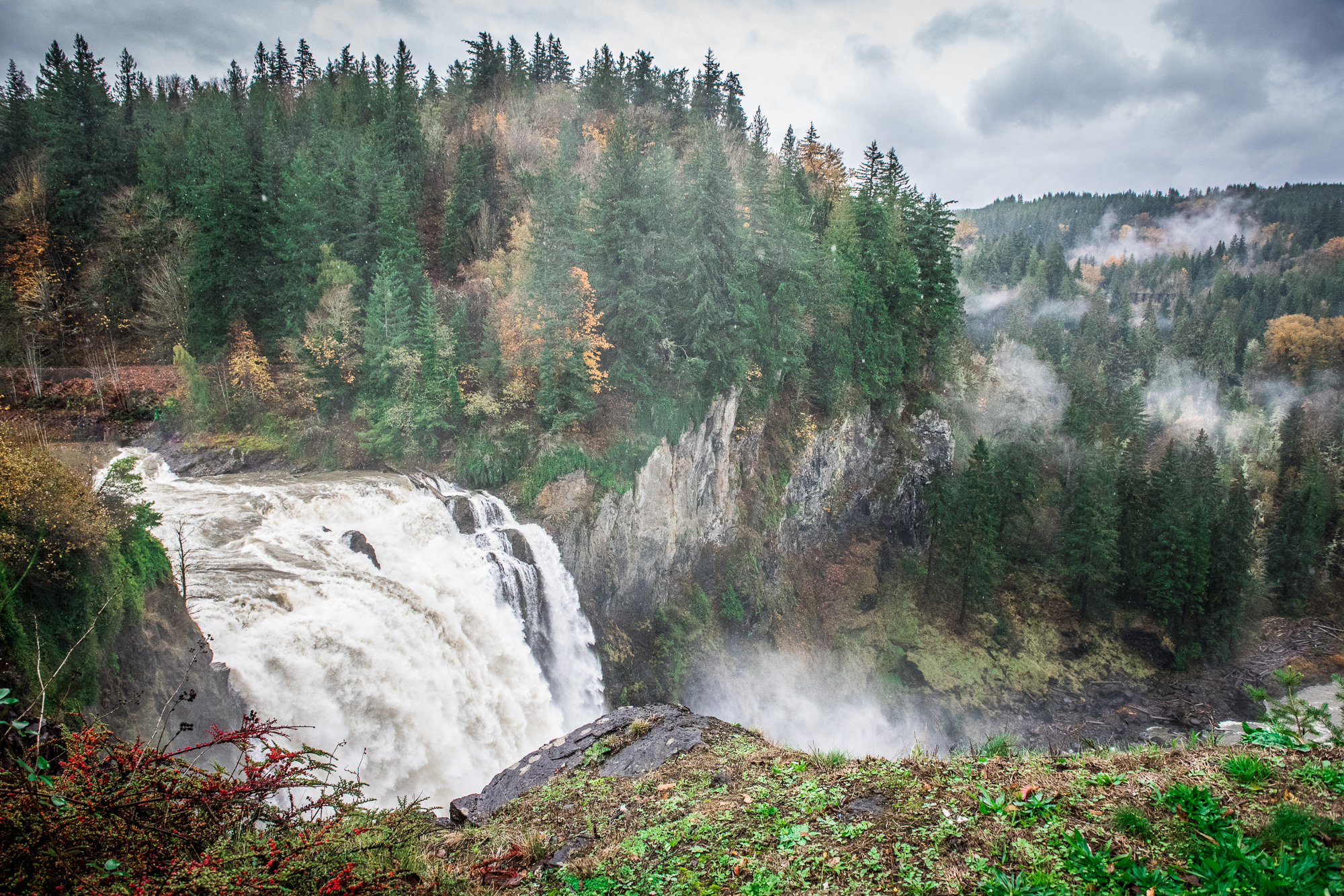 A view from the top of Snoqualmie Falls. (courtesy of the Snoqualmie Tribe)

A view from the top of Snoqualmie Falls. (courtesy of the Snoqualmie Tribe)

The People of the Moon

The Snoqualmie Tribe, also called The People of the Moon, believe that Moon the Transformer created the waterfall and the first man and woman, making Snoqualmie Falls a sacred site.

“It is our beginning and our end,” McKenna Sweet Dorman, Snoqualmie tribal member and assistant director of governmental affairs, said. “The transformation of that water travels over the lip of the falls, hitting the plunge pool becoming the mist and carrying those prayers to our ancestors and the creator.”

The tribe also worries about the danger of low flying helicopter tours in addition to feeling disrespected and they have asked the public and the Federal Aviation Administration to help them. “I see my grandma in the mist, and I feel a connection with her,” Castleberry said. “It's the only place I can do that and it's sad that people take advantage and try to exploit that and ruin that experience for us.”

Castleberry is referring to an advertisement on the website of a company called, Tinggly, which promoted a helicopter tour by Atomic Helicopters, a small Seattle based company. The website promotes the tour by sharing information about Snoqualmie Falls being a sacred and traditional burial site for the Snoqualmie Tribe.

The advertisement has since been taken down and Tinggly has not responded to requests for comment by phone or email.

Sara Andersen, general manager and charter director at Atomic Helicopters, asserts that Tinggly posted that advertisement without the consent or knowledge of the company and once they became aware of it she was told to reach out to Tinggly and request that they remove Atomic Helicopters from their site.

Less than a dozen of Atomic Helicopter’s flights went over the falls this year, each maintained a distance of 1,800 feet or higher and many of these flights were guests of the Salish Lodge, according to Andersen. But as the Snoqualmie Tribe has warned, some local helicopter tours may not be nearly as precautious as Andersen says Atomic Helicopters is.

“Classic Helicopters in Auburn and Helicopters Northwest, now they do some fancy flying but we're the squares of the aviation world,” Andersen said.

The Snoqualmie Tribe says its initial outreach to Atomic Helicopters tours didn’t result in any change. After Dec. 13, when Crosscut spoke to Andersen, all tours that included views of Snoqualmie Falls were removed from their website. Andersen says that they will no longer be including Snoqualmie Falls on any of their future flights either.

“I know we can't stop everyone from flying over their sacred space, but I know that we can do our small part,” Andersen said. Classic Helicopters and Helicopter’s Northwest did not return phone calls or emails requesting comment. 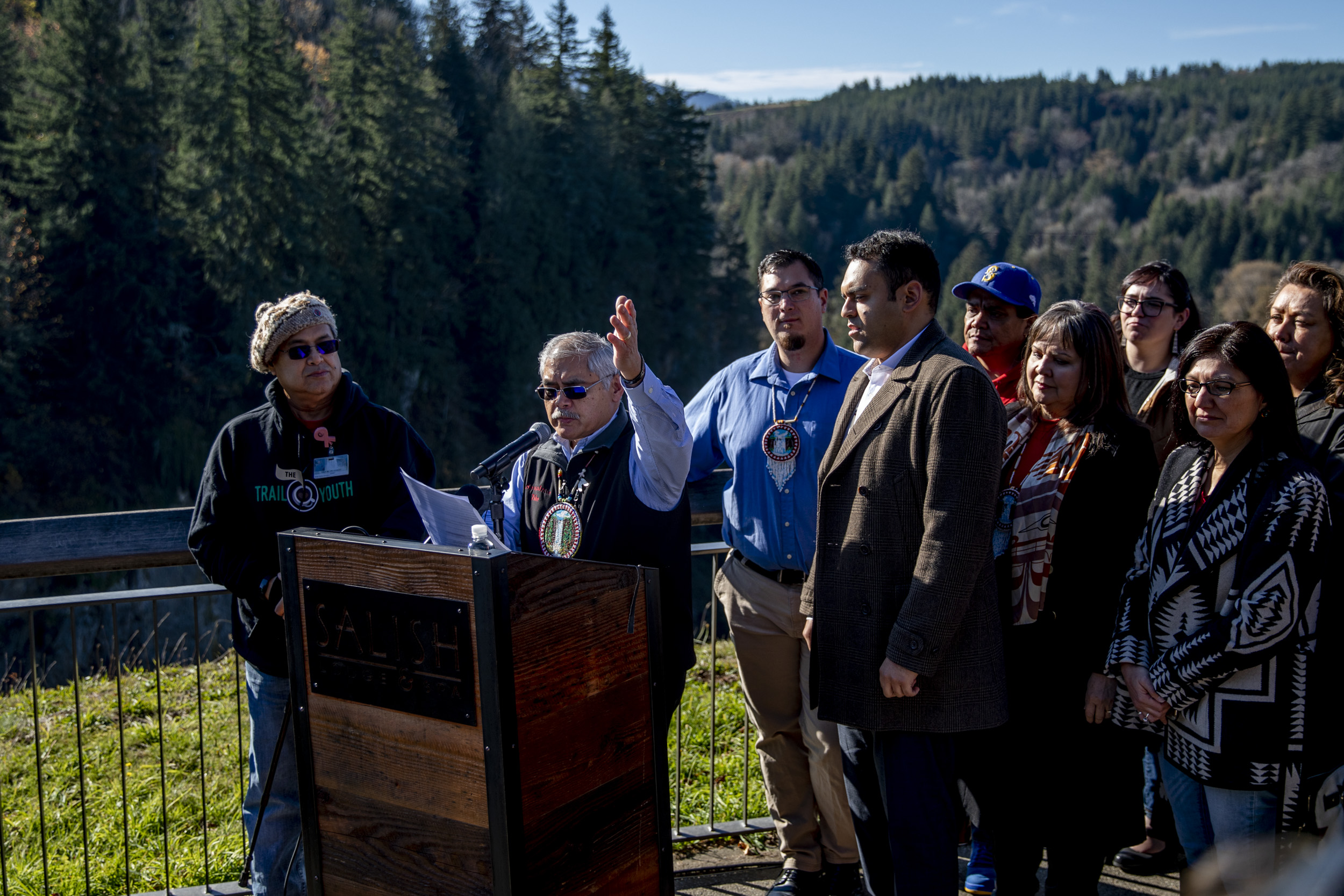 This recent decision by Atomic Helicopters is one small step in the direction the Snoqualmie Tribe is working toward. The tribe’s concerns about unregulated air traffic disturbing their most sacred site has become part of the Snoqualmie Tribe Ancestral Lands Movement that launched this past summer.

“Part of the intent for that movement is to provide actionable things that people can do to practice tribal acknowledgement, tribal support, and land acknowledgement,” explained Jaime Martin, Snoqualmie tribal member and executive director of governmental affairs.

“Hopefully, one of the things that people feel like they can engage with is being able to file an FAA complaint,” Martin said.

A place worth preserving

The Federal Aviation Administration (FAA) regulates aviation for the United States and the surrounding waters. They impose flight restrictions over national monuments and landmarks and even regulate drone usage near monuments and dams. Snoqualmie Falls is listed as a Traditional Cultural Property by the National Register of Historic Places which lists historical places worthy of preservation. In order to preserve and protect this sacred site and the millions of people who visit it, the tribe is urging the public to support them by filing a FAA complaint about the unregulated airspace above Snoqualmie Falls that has become an impediment to the tribe’s cultural sovereignty and safety.

Donnell Evans, spokesman for the FAA commented through email that, “The FAA is aware of the concerns and is working with all parties to consider available options.”

The Snoqualmie Tribe is seeking restrictions similar to the FAA and National Park Service Air Tour Management Plans which restrict the frequency, altitude, duration and more for commercial air tours.

“We know they can do it,” said Rob Roy Smith, attorney for the Snoqualmie Tribe from Kilpatrick Townsend. “It's a matter of motivating them to do it to uphold their responsibility to Snoqualmie people.” 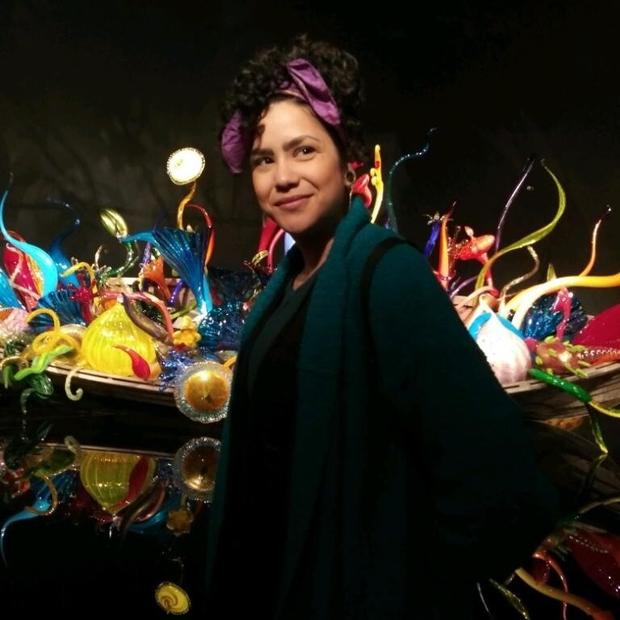