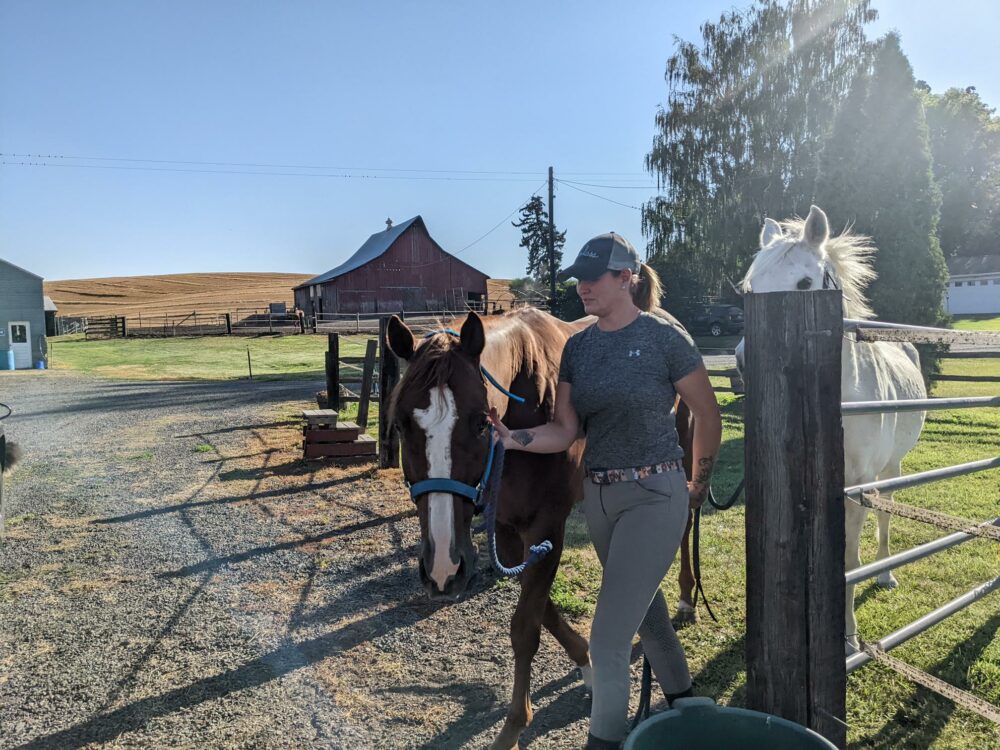 Erin Tomson bringing her horses into the family barn. Her mother Dee used to board horses at their ranch in Pullman, WA. The price of hay is making it harder to afford horses. (Lauren Paterson)

When Dee Tomson began boarding horses in the early 1980s, she paid around $35 a ton for hay. That included loading the hay in the barn with a rack and draft horses.

That somebody includes machines that need fuel.

“It’s all mechanized and takes a lot of effort, which is very expensive. Anybody that buys fuel knows,” Tomson said. “That directly affects the price of both hay and grain. So it’s becoming very expensive to maintain any kind of livestock.”

Tomson is feeding hay and grain to her horses at her property in Pullman. She could feed them something else, something less expensive, but decided against it.

“We swallow the extra cost, because it’s that good-quality feed that makes healthy animals. And if you skimp on what you’re feeding him, you’re going to increase your vet bills, or you’re going to have your horses die,” said Tomson. 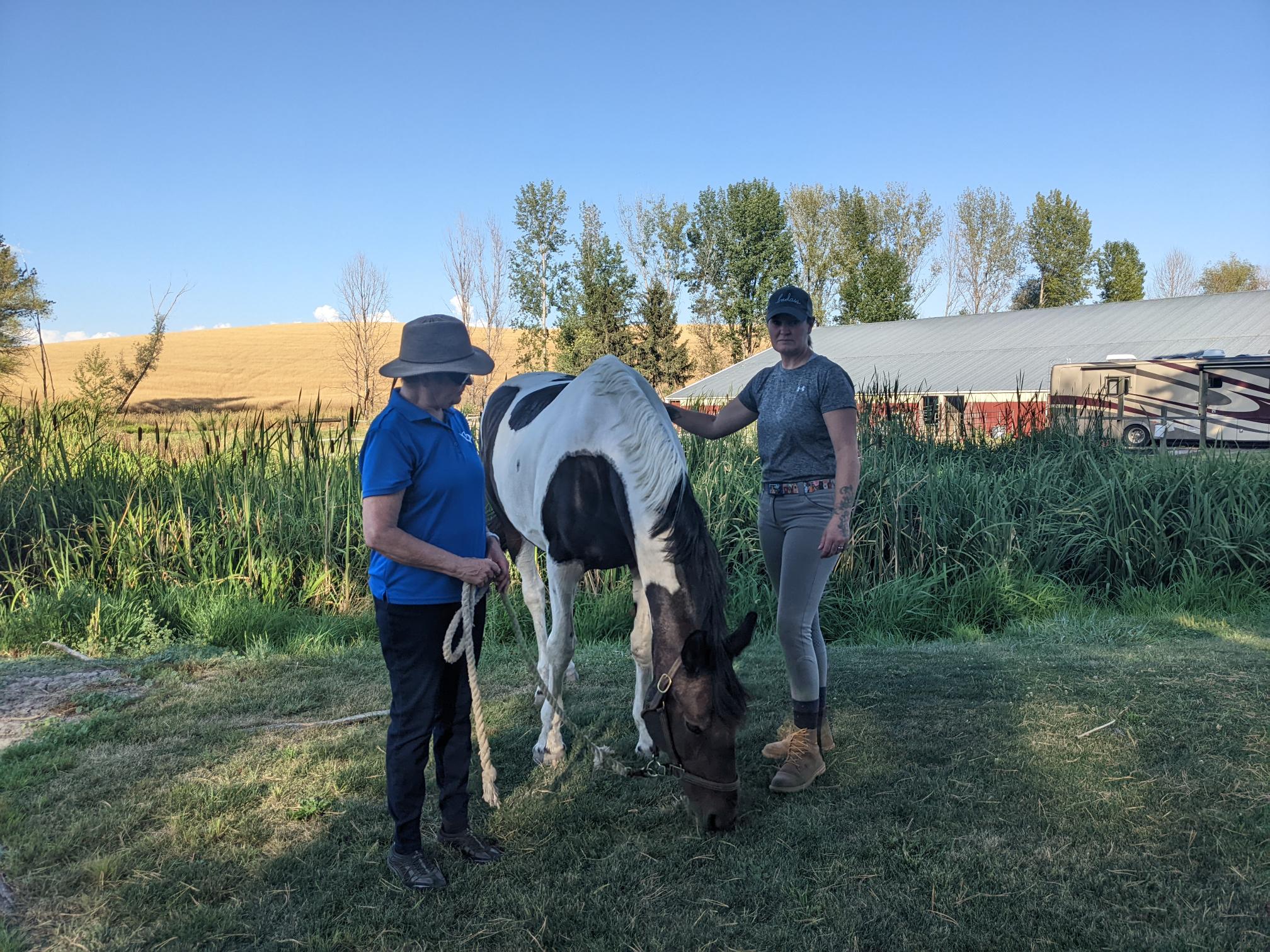 Dee and Erin Tomson stand near Dee’s horse at their home in Pullman, WA. The family says they have plenty of space, but can’t afford more horses because of the price of hay. (Photo by Lauren Paterson)

Dee and Erin Tomson stand near Dee’s horse at their home in Pullman, WA. The family says they have plenty of space, but can’t afford more horses because of the price of hay. (Photo by Lauren Paterson)

Josh Callen knows hay. He runs the website known as The Hoyt Report, tracking market analysis and insights for the U.S. hay market. As he talks to me he’s visiting a farm in southern Idaho. He tells me the long, wet spring made it hard to get a good first cutting.

“But the hay that did go up, obviously, the prices were really strong. And then once we got into second cutting, in late June versus July, the prices just jumped like $30, $40 a ton on the export side.”

And then, in early August, hay exporters started getting pushback from their overseas customers and the prices started going down again, which makes it hard for farmers to make any money.

Callen says there’s plenty of middle- and low-grade hay on the market, but what customers  are looking for is the good stuff.

Customers in places like Japan, Saudi Arabia and South Korea.

“The hay that has grown in the Pacific Northwest is some of the highest quality in the world. And so it is in high demand in key export markets,” said Steve Balaski, director of business development at Northwest Seaport Alliance. His job is to manage products being shipped from the ports of Tacoma and Seattle.

Balaski said hay has not escaped supply-chain issues. He says hay exports are down almost 24% for the year.

He says one reason for that is that ships sometimes skip ports in order to get back on schedule. Or, they’ll only pull in for a limited time. Balaski says he’s working with ocean carriers to figure out how to get ships back on schedule, and get more capacity for exporting products like hay from the Northwest.

Balaski said that price has now tripled. That hurts, because hay’s profit margin is so small.

“Any additional cost that the ag exporter has to bear goes directly to their bottom line,” said Balaski.

The price of hay is also dependent on things like fertilizer, labor, and the costs of production. Growers in Washington state are now mandated by law to pay overtime to farm workers.

If hay growers can’t ship their products, they’re less likely to grow it next year.

One guy who’s likely to continue growing hay is Andrew Eddie. He’s the president of the Washington Hay Growers Association and farmer of 1,300 acres of alfalfa, timothy hay, and orchard grass in Moses Lake.

He said the higher cost of hay is likely to have downstream effects for other agricultural products.

The fourth cutting for hay is usually finished by the end of September or early October. Depending on how that goes, we might all be paying a little more at the grocery store.

This story was produced for Northwest Public Broadcasting on Sept. 20, 2022 and is republished here with permission. 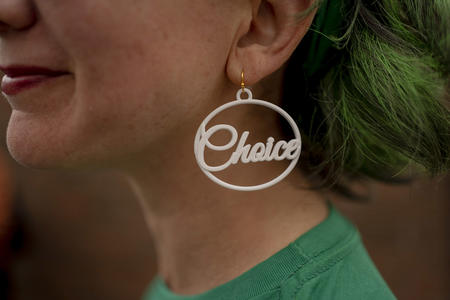 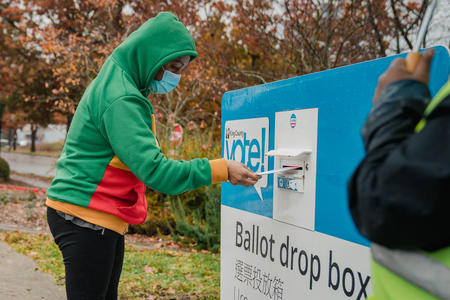 Lauren Paterson is the Inland Northwest Regional Multimedia Journalist for Northwest Public Broadcasting and Spokane Public Radio. Her beats follow socioeconomics, the arts, education, and the complexities of rural life.