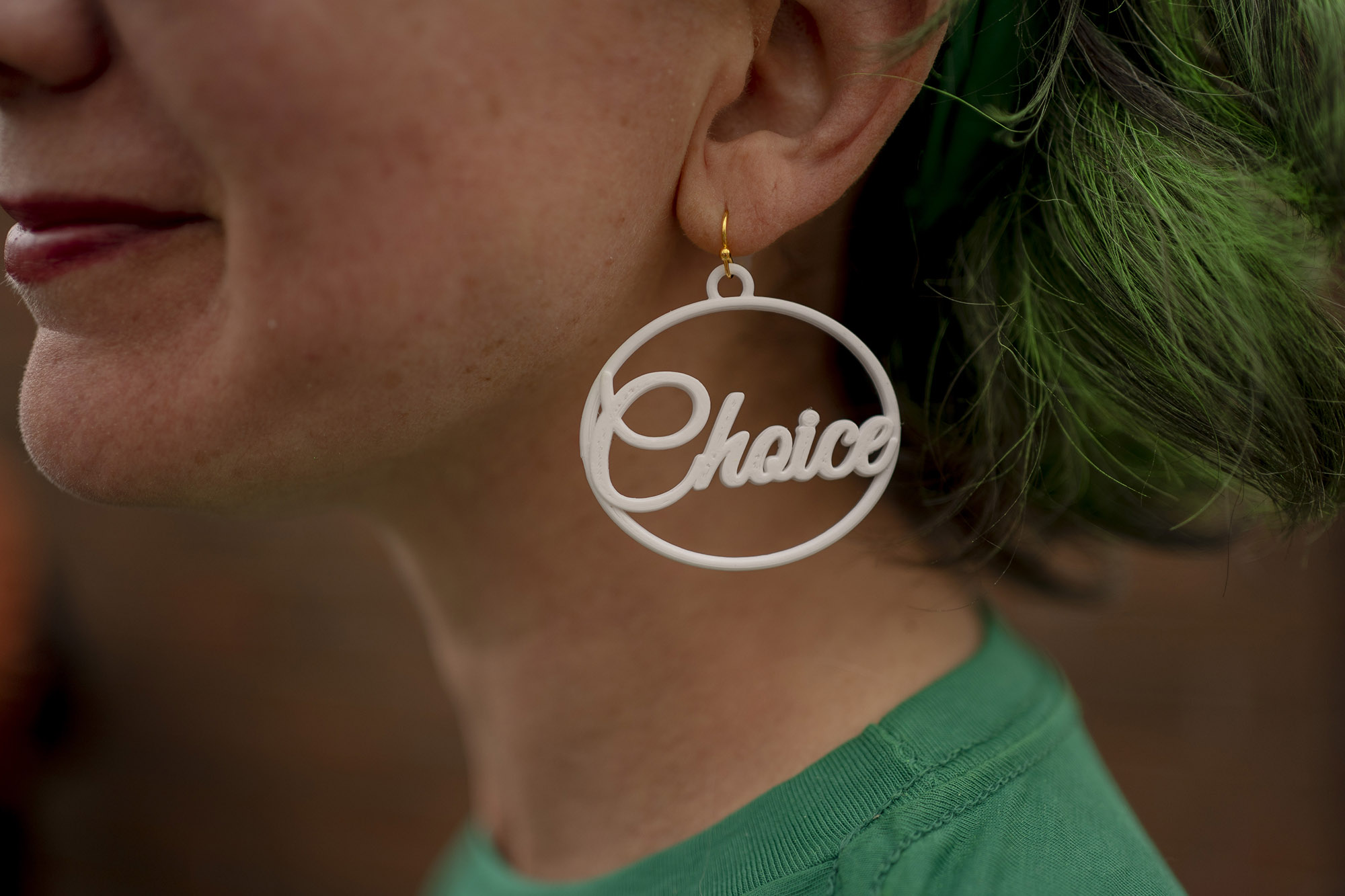 Emily Pinzur wears an earring that says “Choice,” paired with one on her other ear that says “Pro,” during a walkout, rally, and march in support of abortion rights that began at Seattle Central College on May 26, 2022. (David Ryder/Crosscut)

Washington voters are heading into the midterm elections with abortion rights, the economy and political polarization at the top of their minds, according to a new Crosscut/Elway poll.

The Sept. 12-15 survey of 403 likely voters shows Democrats maintaining a broad advantage in races for U.S. Congress and the Legislature.

But the numbers have tightened since a similar poll in July, with Republicans gaining some ground as the fall campaign season moves into full swing.

In the new poll, 38% of voters identified themselves as Democrats, compared to 27% who said they were Republicans. That’s a slimmer margin than the July survey, when Democrats led that question 40% to 22%. The Democratic advantage on that question is also below the average  since the Obama administration, according to pollster Stuart Elway.

Still, Democrats have an edge in intensity when it comes to keeping the U.S. House and Senate in Democratic hands. Of those surveyed, 49% said they wanted Democrats to keep control of Congress, including 39% who said that was “important.”

Another 41% said they’d like Republicans to take at least one chamber of Congress, including 29% who called it “important” to do so.

“The races have tightened up, which is typical at this time of year as more voters start to focus on the election,” pollster Stuart Elway wrote in an email. “The polls may change more in the closing weeks, but Democrats still have a considerable edge.” 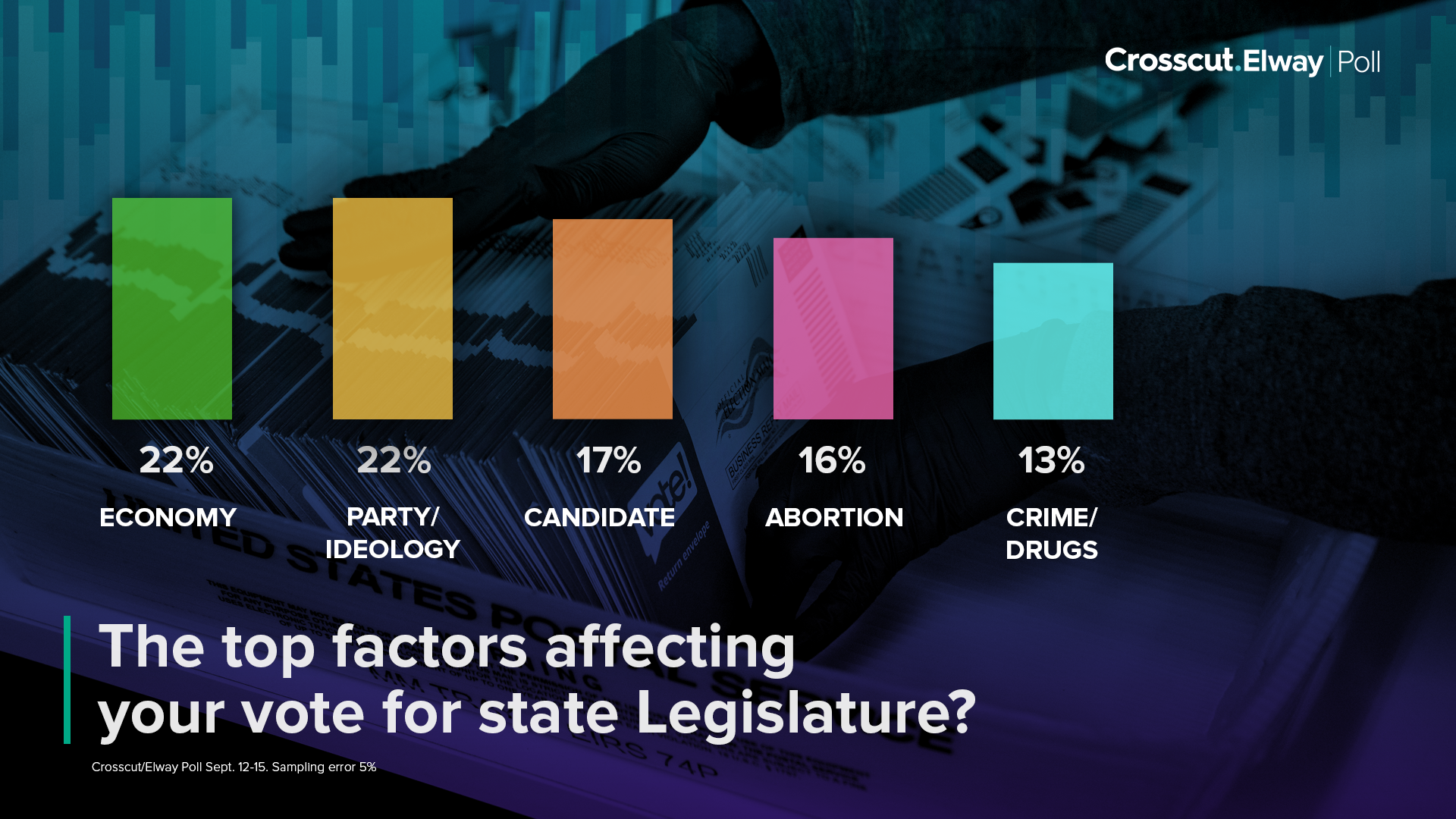 The Crosscut/Elway Poll has a 5% margin of error at the 95% confidence level. That means that if the survey had been conducted 100 times, the results would be within 5 percentage points of the results reported here at least 95 times.

The latest survey arrives as the turbulent economy and political news out of Washington, D.C., have continued to factor in voters’ minds as the major political parties make a final push ahead of the Nov. 8 general election voting period.

In addition to the senate election, Washington voters will vote on representatives, including in a pair of congressional districts – the 8th, which includes eastern King County, and the 3rd in Southwest Washington – that could help determine the balance of the U.S. House. Voters are also chiming in on state House and Senate candidates, which will determine what happens to Democratic control in Olympia.

There’s also a special election for one statewide position – secretary of state – which appears to be a tossup.

Washington Secretary of State Steve Hobbs is narrowly leading Julie Anderson, a nonpartisan candidate, according to the new poll. Hobbs, a Democrat appointed to the office last year to fill a vacancy, leads Anderson 31% to 29%. Another 40% of voters remain undecided.

As Democratic President Joe Biden’s poll numbers have sagged this year and inflation – which has driven up the cost of gas, groceries and other needs – has fluctuated, voters have cited the economy as a main concern.

But the June U.S. Supreme Court decision overturning federal protections for abortion energized Democratic voters in an election cycle that often is rough for the political party holding the White House. By the time the August primaries rolled around, hopes among Republicans of a “red wave” had faded. Although the general election could bring surprises, the August primary results showed Democrats handily keeping their legislative majorities in Olympia. 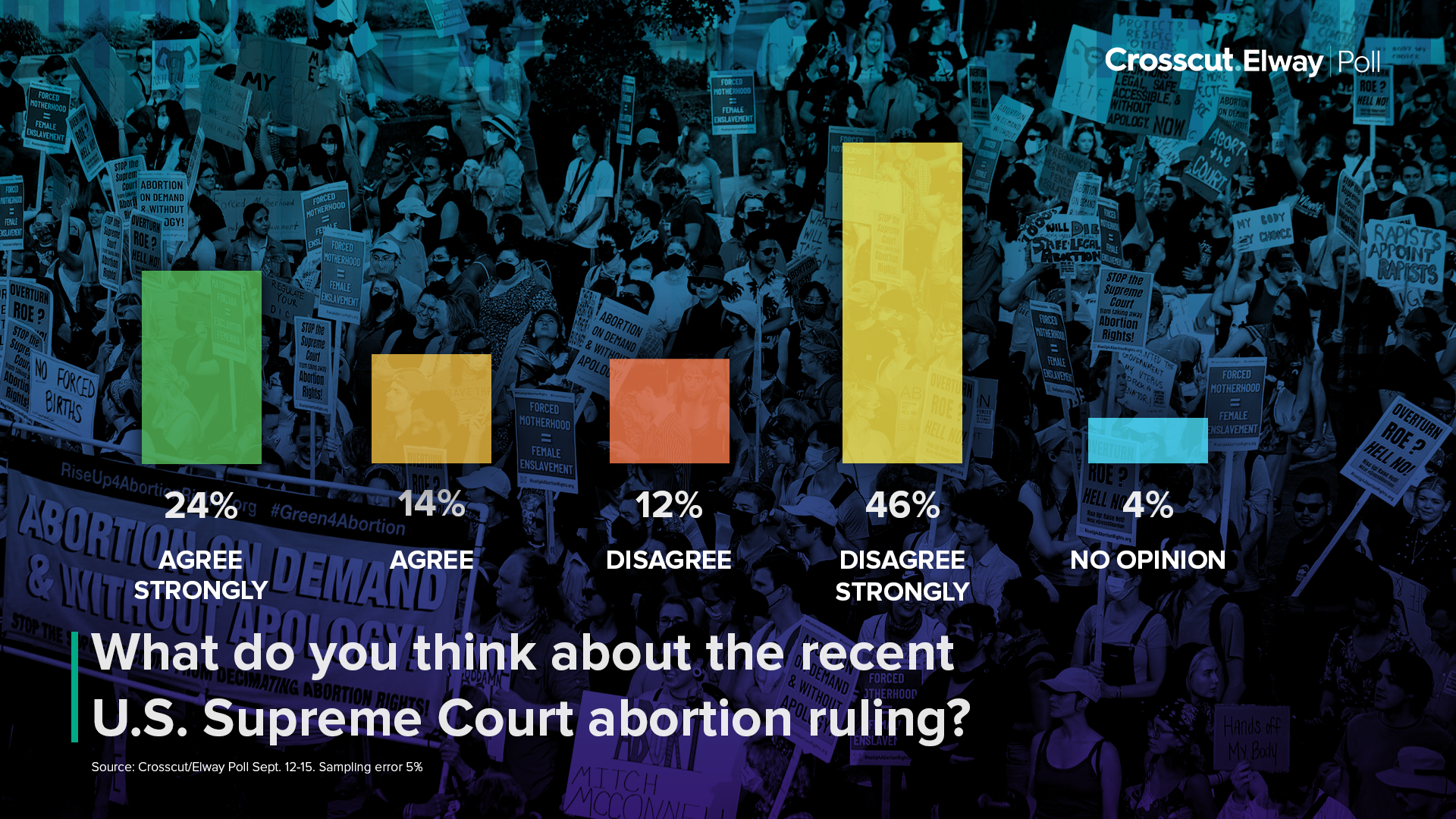 In the new poll, 58% of Washington state voters said they disagreed with the court’s abortion ruling. Meanwhile, 16% of those polled cited abortion as an important factor when choosing a candidate for the Legislature. While Washington’s existing laws make abortion legal in most situations, the Legislature could change those laws if they have the votes.

Still, abortion wasn’t the biggest factor among those surveyed, with 22% of voters citing the economy, gas prices or jobs as their biggest factor when choosing a state lawmaker. One of those voters is Patricia Pearson, a retiree who lives in Elma, a rural community in Grays Harbor County. Pearson, 80, cited the cost of gas as the most important issue to her.

“I have to drive 30 miles if I have to see my doctor or go to the Walmart,” said Pearson, who criticized the Biden administration for halting the proposed Keystone XL pipeline.

The new poll also documents the deepening effects of political polarization. Another 22% of voters said political party or ideology was the biggest factor for them. When asked, some described their motivating factor with terms like “Anti-Democrat” or “Pro-Democrat” or “Anti-Trump” or “Not woke.”

CORRECTION: This version of the story corrects the poll data on the U.S. Senate race to fix a rounding error. The correct percentage shows Sen. Patty Murray is leading Republican challenger Tiffany Smiley 50% to 37%.

“Party identification has always been a factor, but we’ve seen it grow over the last several cycles,” said Elway. “Elections have become more partisan, and more voters are looking at party ID as their primary decision factor.”

Richland resident Steve Barlow, a retired research scientist, is among them. He cites his biggest factor is voting against Republicans, he said, especially after their hands-off response to the COVID-19 pandemic and efforts by former President Donald Trump and some of his supporters to overturn the 2020 election results and make it harder in other states to cast a ballot.

"The whole thing of trying to overturn elections ... standing in the way of people, trying to discourage voters they don't want at the polls from voting," said Barlow, 72.

“Which indicates that most Republicans are still Donald Trump supporters, though it's not quite the commanding majority that it might seem,” Elway added.

Voters showed a range of opinions about four key recent decisions by the U.S. Supreme Court, which now has a consistent conservative majority.

A majority of those polled also disagreed with a court decision restricting the U.S. Environmental Protection Agency’s ability to regulate the emission of carbon coming from power plants. The 53% who were against that decision included 37% who “strongly disagreed” with it.

At the same time, almost a majority of those surveyed – 49% –  agreed with the court’s ruling that a Bremerton high school football coach could lead prayers on the field after games. That included 31% who “strongly agreed” with the decision. Another 39% disagreed with that court ruling, including 27% who “strongly disagreed.”

The biggest split came with a Second Amendment-related ruling, where the court struck down a New York state requirement to prove a need for self-protection to get a concealed-carry license for a weapon.