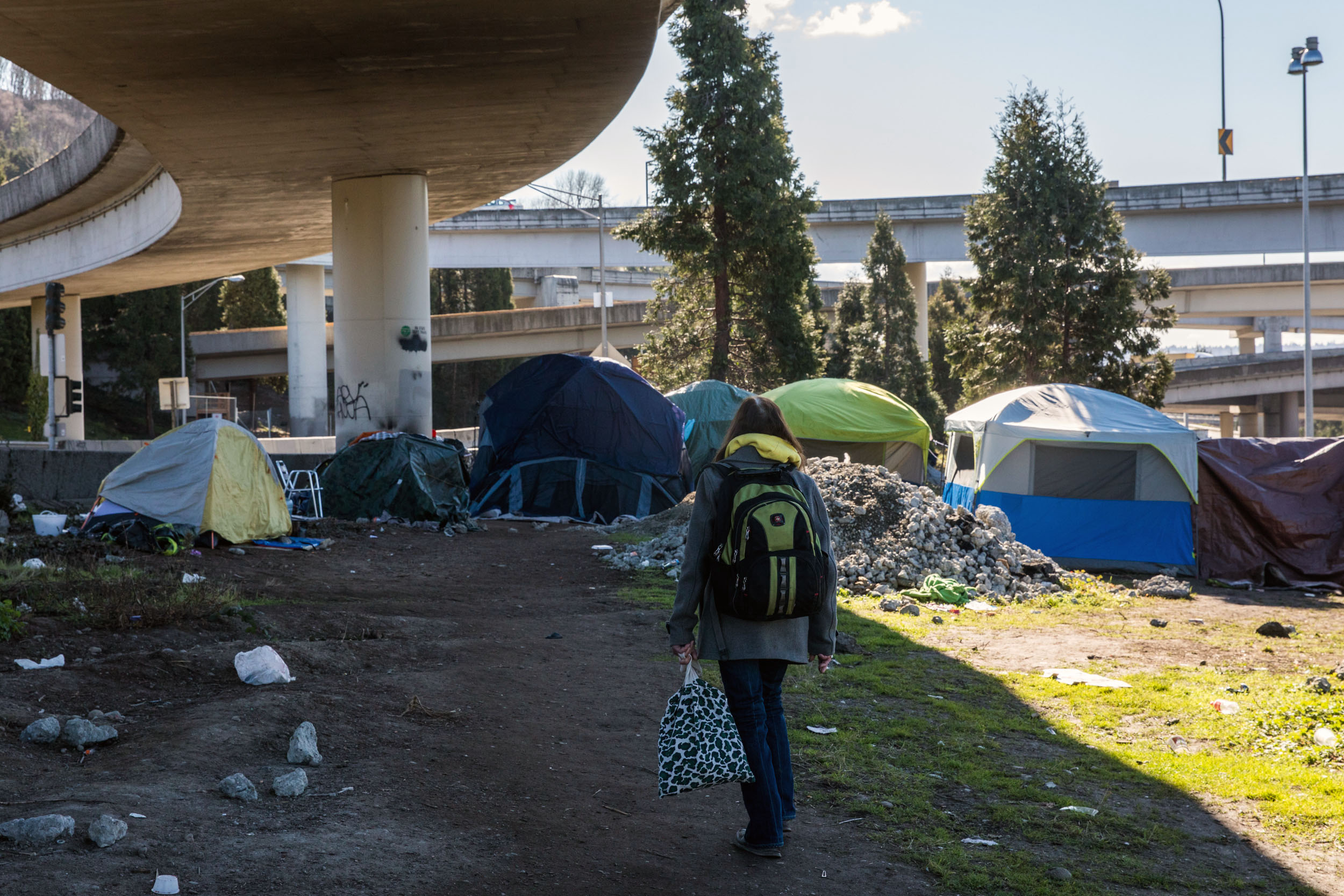 Former Seattle City Councilmember Tim Burgess and a bevy of business groups are tired of the tents.

They have a vision: The city should, very quickly, create a lot of new shelter or housing. Then it should move people off the streets and out of the parks and into that shelter or housing. And it should provide whatever supports, like mental health services and drug treatment, people may need to stay there. Voilà. No more tents.

To achieve this vision, they’ve cooked up a proposed amendment to the city charter, which is kind of like the constitution of the city. And they’ve launched an initiative campaign they hope will win the hearts and minds of Seattle voters: Compassion Seattle.

Is amending the city charter a reasonable way to address Seattle’s homelessness crisis? And does the most recent language, honed through several rounds of input from some service providers, really embody a “compassionate” approach? Those questions have divided homelessness advocates. Compassion Seattle claims not only that the answers are yes, but also — hold on to your hat — that the city can carry out this work with no new resources.

Earlier this month, the campaign released a “Cost Fact Sheet,” which purports to show, in nine points, “how existing funds can be reallocated to achieve the amendment’s objectives.” Let’s take a look.

Two of the points are not actually about funds, they’re about polling. According to the campaign, 57% of respondents named homelessness as their top issue of concern, and 73% thought the city should implement a plan like Compassion Seattle’s without raising new taxes. The campaign hasn’t made its poll public, so we don’t know the wording of the questions or what information respondents were given. But you can bet they weren’t told what programs and services would be cut to produce the required funds. Fun fact: 73% of children think their parents should buy them a pony. That doesn’t mean their parents have the money.

Three more points simply restate, in slightly different words, what is supposed to be demonstrated. We are told that “the City has the capacity to redirect existing funding,” that “adopting any form of new taxes is not necessary” and that “we believe the City of Seattle has the necessary resources in its general fund.” Clearly the campaign has taken to heart one of the basic rules of propaganda: Repeat something often enough, and people will start to believe it. No evidence needed.

So, five out of the nine points are essentially packing peanuts. The remaining four better be good. Let’s keep rooting through the box.

Show me the money

Now we get to some actual numbers. The charter amendment would require the city to direct 12% of its general fund to human services, and allow philanthropists and other private actors to contribute, too. Compassion Seattle’s fact sheet states that if this requirement were in effect this year, $18 million more would flow into the human services fund from the general fund, for a total of nearly $193 million.

The rosiest revenue forecast to date, released several days after the fact sheet, puts $1.594 billion in the general fund this year; and 12% of that is $191 million, not $193 million. Quibbles aside, let’s assume that the city shifts $18 million more to homelessness starting in 2022. The fact sheet doesn’t state what should be cut, but the most obvious area to draw from is public safety, which accounts for half of general fund spending this year. We’ll call that progress.

The next substantial point notes that “Seattle/King County is expected to receive approximately $800 million from the federal government as part of the American Rescue Plan Act of 2021.” This is true. However, $437 million is headed to King County government and a bunch more to other cities in the county, leaving Seattle with just $239 million. The city already plans to spend half of that this year on pandemic priorities, including but not limited to homelessness — also rental assistance, vaccines, food assistance, child care, aid to small businesses and more. The other half will be allocated during this fall’s budget process for anticipated spending in 2022. So let’s assume, unrealistically but for the sake of argument, that mayor and council reserve every cent for the charter amendment. That’s $120 million. More progress!

The next point recommends the “innovative use of Medicaid waiver funds.” (Medicaid waivers allow states to provide some services not normally covered by Medicaid to eligible individuals.) I asked Susan McLaughlin, executive director of HealthierHere, the agency the fact sheet says the city should partner with, what this means.

She pointed out that Medicaid waiver in question is time-limited. “2021 is the last year of the five-year waiver,” she says, “although the state Health Care Authority is pursuing a one-year extension” due to COVID. If successful, there may be some limited funds — likely in the hundreds of thousands, not millions, of dollars — available next year to test new concepts over and above continuing the current program. But beyond 2022, it's unclear whether there will be a new Medicaid waiver or what its parameters might be. This doesn’t sound like funding the city should count on.

The final point refers to House Bill 1277, which is thankfully becoming law. The bill increases the document recording fee and, according to the fact sheet, will “raise hundreds of millions of dollars that could be applied.”

In fact, the bill will generate an estimated $146 million per year statewide, and our local portion will be handled by King County, not Seattle. Michele Thomas, director of policy and advocacy at the Washington Low Income Housing Alliance, says that a high priority will be addressing a chronic shortfall of funds for the operation and maintenance of permanent supportive housing projects that already exist or are in the pipeline.

“Over 1,000 units currently funded in Seattle are designed to serve vulnerable and homeless populations,” she says. “Many of those units are in need of operations support to ensure that they can serve the intended populations."

While it’s possible that some funds from HB 1277 will be spent within Seattle to create and staff new emergency housing, as directed by the charter amendment, the city will not have discretion over this.

So there we have it: $120 million in one-time federal money, plus $18 million cut from who-knows-what other city programs, augmented by ample hand-waving about philanthropy, future federal grants and assorted funds that are already spoken for or that the city doesn’t even control.

Getting real about revenue

Is this enough? The charter amendment directs the city to provide, within a year of its adoption, 2,000 new units of “emergency or permanent housing with services including access to behavioral health services and necessary staffing to serve people with the highest barriers.” Can this be done for $138 million?

The short answer is almost certainly not, but the actual costs depend heavily on the details. Compassion Seattle doesn’t seem much interested in details. By contrast, the Third Door Coalition, a collaboration between service providers and business leaders, has examined what it would take to end chronic homelessness in King County. It ain’t cheap — though, according to an analysis from the Seattle University School of Law’s Homeless Rights Advocacy Project, doing nothing is even more expensive. It’s just that the costs show up elsewhere: emergency room visits and hospital stays, cop salaries, court and incarceration costs.

If all 2,000 units were new permanent supportive housing, Third Door’s analysis puts construction at over half a billion dollars. That’s not counting operating costs, including services, which are often estimated at around $22,000 per unit per year. So that’s another $44 million per year.

In practice, if the measure passes, the city will likely seek other ways to comply. It will create “emergency housing” (noncongregate shelter) instead of permanent housing. Instead of new construction, it will try to buy distressed properties and buy or lease hotels. Still, it won’t be cheap. Maybe, hopefully, more federal money will materialize and make this easier. Maybe not.

What other options does the city have to shift existing funds? One possibility is to reallocate resources within the Human Services Department. But dedicating dramatically more of that budget to chronic homelessness would mean slashing programs that focus on, for example, youth, family and veteran homelessness. That doesn’t seem like a great idea.

Alternatively, elected officials could look to other areas of the city budget. How about defunding the police? Though that’s probably not what backers of Compassion Seattle have in mind.

Then there’s Jumpstart Seattle, the new big business tax. Burgess has mentioned this as a potential source; I guess it didn’t make it onto the fact sheet because the Seattle Metropolitan Chamber of Commerce, one of the business groups behind Compassion Seattle, is also suing the city to try to kill the tax. In any case, starting in 2022, the bulk of Jumpstart revenue is already slated for building affordable housing. Reallocating these funds to emergency shelter and services would delay real solutions to the homelessness crisis in favor of a short-term fix.

There just aren’t a lot of easy options. The service providers who have half-endorsed the charter amendment understand this, noting in a statement that “the solutions require additional financial resources to meet the scale of what’s needed.” As we’ve seen, the initiative’s business backers insist otherwise. Despite this discord, Lisa Daugaard, director of the Public Defender Association, thinks it’s a step forward:

"First, there has to be broad agreement on what needs to be done, and that’s the effort being made with this initiative, which we have not had in the past,” she says. “Getting past that fight is step one. There is little doubt that the level of revenue needed for the work the initiative would require is well above the minimum required in the proposed charter amendment, so that calculation could flow from this policy agreement.”

In other words, Daugaard and other service providers who helped shape the initiative hope that its passage will launch a serious conversation about the costs, revenue and how to truly address the homelessness crisis at scale. I sure hope they’re right.