The Gates divorce and the risks of billionaire philanthropy

Relying on the charity of the uber wealthy is a poor substitute for the kind of ongoing support more progressive taxes can provide. 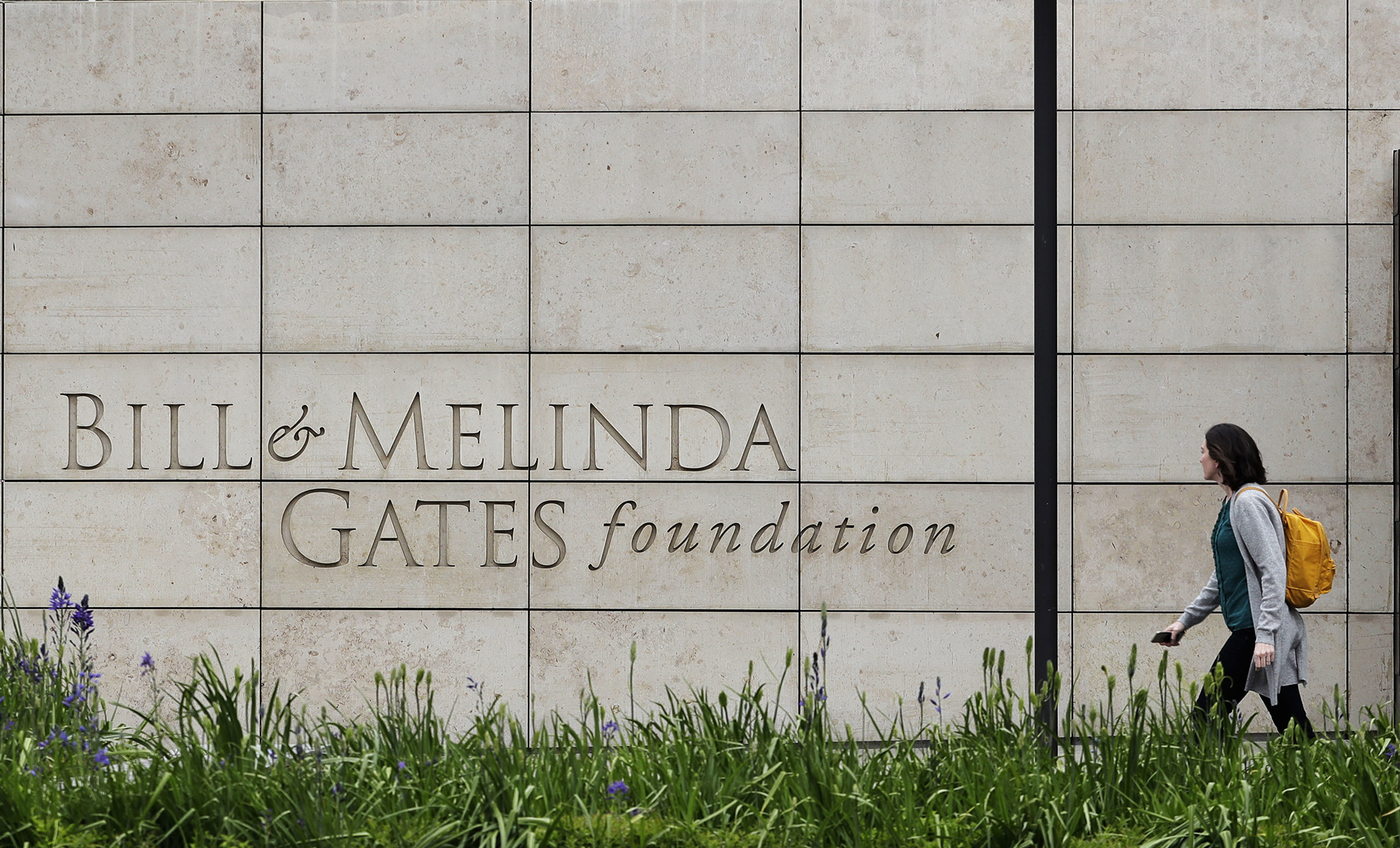 In this April 27, 2018, file photo, a person walks by the headquarters of the Bill and Melinda Gates Foundation in Seattle. (AP Photo/Ted S. Warren, File)

When I first heard that Bill and Melinda Gates were divorcing, my first panicked thought was about all the money their foundation distributes locally.

The Bill & Melinda Gates Foundation says it gives out about $300 million in grant money to Washington state organizations every year, which is sizable. That’s about as much money as Gov. Jay Inslee distributed to local governments last year from the federal stimulus package. Indeed, here in Washington State, we’ve grown accustomed to billionaire philanthropy almost as part of our annual revenue stream, relying on it to support the arts, journalism, health care, education, housing initiatives and more.

So I started asking people what would happen to that cash now that Bill and Melinda Gates are splitting up. The Gates Foundation told me, “No changes to their roles or the organization are planned. They will continue to work together to shape and approve foundation strategies, advocate for the foundation’s issues and set the organization’s overall direction.”

Washington Nonprofits, an umbrella association of the state’s nonprofits, told me it had “no comment” on the question of continuing support from the Gates Foundation for organizations statewide, which would seem to suggest, at the very least, that it’s not facing some imminent crisis. (Washington Nonprofits is itself supported by the Gates Foundation.)

The more I asked this question, though, the more I realized the problem was that I even had to ask it in the first place. Two people getting a divorce should not throw funding for so many organizations into jeopardy. Yes, for now, the Gateses’ money doesn’t appear to be going anywhere, but it’s almost lucky that their foundation has so much inertia. People are fickle and people can surprise you. Bill Gates could wake up tomorrow, decide he’s done with philanthropy, and go spend $300 million on a superyacht.

There is an obvious better way to secure funding for the social good: The amount of money the Gates Foundation distributes to Washington nonprofits every year pales in comparison to the annual revenue our state could generate through a wealth tax and other measures that would require the rich to pay their fair share.

Indeed, there are few clearer pictures of our state’s regressive approach to funding public services than our reliance on billionaire philanthropy. Instead of instituting a more equitable tax system, we place a greater burden on the working class, then depend on a mélange of government money, nonprofit organizations and private donations. That has put us in a situation where a single divorce can send shockwaves through both our state and the nation.

“It’s always scary when nonprofits are dependent upon private funders who can change completely at their own whim,” Inside Philanthropy editor David Callahan tells me. “I don’t think that’s the way we should fund really important needs in our society.”

That’s an opinion he holds even if nothing changes with the Gateses’ giving. I asked Callahan if he thinks the divorce will impact the Gates Foundation’s involvement in Washington state, and he said, “My guess would be probably not. It seems like the Gates Foundation has a long history of funding in the Northwest [and] I don’t see any reason why they would change that.”

Still, “probably” is a hard word to hear when the Gates Foundation supports organizations that work in so many vital areas, ranging from COVID-19 relief to affordable housing initiatives to early childhood education.

Taxes are a lot better than “probably.” (As Benjamin Franklin’s old saying goes, it’s one of only two things in this world that is “certain.”) If Washington instituted a wealth tax on billionaires — like the one Rep. Noel Frame, D-Seattle, proposed earlier this year, which would have applied a 1% tax to all Washington residents whose wealth exceeds $1 billion — the state could raise an additional $2.5 billion per year. That’s over eight times the amount of money the Gates Foundation says it gives out annually to Washington organizations in the form of grants.

The money would come consistently, predictably and in droves large enough to tackle some of our state’s biggest challenges. The ultrarich sometimes threaten to leave if taxes become too onerous — at least in their view — but the jury’s still out on whether they actually will, with some analyses suggesting that they care more about place than they do about optimizing their tax rate.

“It’s great that Puget Sound billionaires and others of wealth see value in supporting health and the arts and so on, but it’s not like public funding financed through progressive taxation,” Rob Larson, a professor of economics at Tacoma Community College and a critic of Bill Gates’s philanthropic giving, tells me. “It’s based on individual whims, and indeed major life events from divorces to strokes are the kind of thing that throw individual preferences and concerns into flux.”

Billionaires like Bill Gates are happy to wow us with big-ticket charitable donations — and indeed, the portion of their money they do give away has accomplished some actual good in the world and will continue to do so — but they tend to shy away from the idea of giving a percentage of their total wealth to the government. They’d much rather sign The Giving Pledge and maintain control over where they distribute their money than accept that the ethical thing to do would be to allow the voice of the people to influence where it goes via our elected officials.

At the end of 2019, Bill Gates wrote a blog post in which he correctly noted  that Washington has “the most regressive tax system in the country,” but stopped short of acknowledging one of the most obvious solutions, namely requiring “centibillionaires” like him to have their total assets taxed.

He voiced his support for the capital gains tax (which just passed here for the first time), for the estate tax (which Washington state has long had in place), and for a state income tax (which we, of course, don’t have). But he said nary a word in favor of a wealth tax — and, in 2020, when Democratic presidential candidate Elizabeth Warren was campaigning on a wealth tax, the Microsoft co-founder famously joked that he would have “to do a little math about what I have left over.” Ha-ha?

There’s a reason why the Gateses and the Bezoses of the world get squeamish or fall silent whenever the topic of a wealth tax comes up: They did not get rich based off their salaries, but from stocks and long-term investments that have skyrocketed them to even more meteoric heights during the pandemic.

“You really need a wealth tax to get at that money,” Callahan explains, noting that the wealthy tend to cite “philosophical” reasons for not wanting to pay one.

Indeed, Bill Gates wrote in his 2019 blog post that he “think[s] there’s value to society in allowing the wealthy to put some money into private foundations, because foundations play an irreplaceable role that’s distinct from what governments do well.” He also implicitly cautioned that raising taxes too high would disincentivize job creation. Those kinds of justifications are built on the same myth that was used to prop up Reagan-era trickle-down economics — the idea that rich people need to be allowed to pool massive amounts of wealth to create the companies that employ the rest of us.

The reality is that government, for all its imperfections, really is more effective at administering many kinds of services than private entities are. (See, for a recent example, CVS and Walgreens wasting more COVID-19 vaccines than all government agencies combined, as Kaiser Health News reported.) And with so many urgent problems staring us in the face here in Washington state — like homelessness and a lack of affordable housing — it’s clear that current approaches are insufficient.

There are approximately 30,000 nonprofits and 21 billionaires in Washington state, and yet we can’t seem to figure out how to house over 16,000 homeless people, to cite just one example of a stubbornly persistent problem. The Gates Foundation handing out some multimillion-dollar grants every year might make a dent in some of the symptoms of this crisis, but having a billion dollars to address its roots would be far preferable, wouldn’t it?

We’ve gotten used to this triangulated relationship here in the Puget Sound region: Billionaires fund organizations that offer the kind of public services that local governments don’t have the funding or the political backing to provide. (I’m writing this very article for an outlet that has received Gates Foundation money in the past — and I’m quite glad Crosscut exists!)

But whether it’s performed out of genuine altruism or out of a desire to burnish their image, as many cynics expect, billionaire philanthropy is a poor substitute for the kind of ongoing support more progressive taxes can provide. A divorce between two of our billionaires should be a sobering wake-up call for a region that has come to rely on what amounts to loose change falling from their pockets.