Update: Plans to tax the rich advancing in WA Legislature in 2021 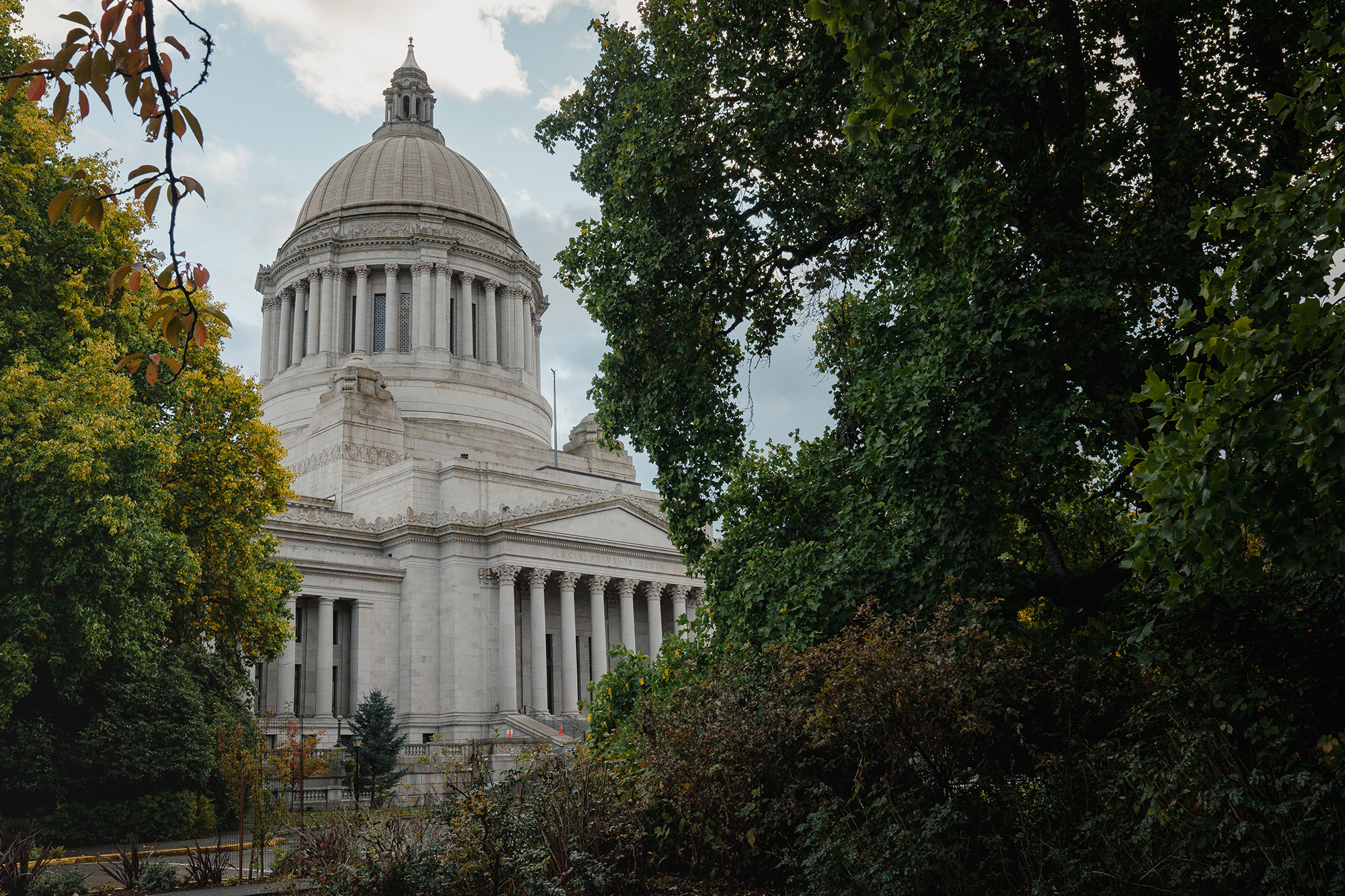 A tax on capital gains, such as profits from selling stocks and bonds, is something that has been discussed in Olympia for many years. But 2021 is the first time it has had enough support to pass the state Senate, as it did Saturday, March 6.

That means the capital gains tax could very well clear the Legislature this year and become law, since Democratic leaders in the House and Democratic Gov. Jay Inslee have long supported it.

A new payroll tax on corporations that pay high salaries — similar to a measure recently approved in Seattle — also is under discussion.

Another new measure would focus on taxing billionaires.

Each of the proposals is different. But for many Democrats, as well as others on the political left, the goal is the same: Make the richest Washingtonians pay for COVID-19 relief programs, public health and other services that would help people who are struggling. Democrats also say the state's current tax system is highly regressive, meaning lower-income people pay a larger share of their income in taxes than the wealthy. They are looking to correct that imbalance.

Republicans, who are in the minority in both chambers of the Legislature, have argued new taxes aren’t needed to pay for COVID-19 relief and other state programs, particularly given the money in the state's rainy day fund and the aid Washington expects to get from a new federal stimulus package.

Here’s a breakdown of the different measures to tax the wealthy in Washington state and how they differ from one another. We’ll attempt to keep this story updated as new tax measures are introduced during the 2021 legislative session and as existing ones change.

This tax would apply to sales of assets that generate a significant profit. Often, those assets are stocks and bonds, but they also can include real estate. One legislative analysis notes that even furniture counts as a capital asset that, if sold at a profit, would produce capital gains.

The proposals now under consideration are unlikely to apply to selling your couch on Craigslist, however. They most likely wouldn’t even apply if you are a homeowner choosing to sell your house.

A version of the tax sponsored by state Sen. June Robinson, D-Everett, would apply a 7% tax rate to capital gains that exceed $250,000 in a given year. Profits below that threshold would be exempt. This is the version of the tax that has passed the state Senate.

All real estate transactions, including home sales, would also be exempt from this version of the tax. So would earnings from retirement accounts, profits from selling livestock, and income from selling small business that gross under $10 million in the year before the sale.

Robinson's proposal would raise only about half of that. Her plan specifies that $350 million per year of the capital-gains tax revenue would be placed in an account that pays for investments in early education programs, as established by Senate Bill 5237.

The measure would provide a tax credit for certain businesses, so they wouldn't pay both the capital gains tax and a business and occupation tax on the same sales of assets. About $100 million of the revenue would go to the state general fund, to offset the cost of providing that tax credit.

The remainder of the tax revenue — an estimated $200 million or so per year — would go into a new taxpayer relief fund, but it's not yet clear exactly how that money would be spent.

On March 6, the Senate voted to advance Robinson's amended version of the capital gains tax on a 25-24 vote.

Senate Democrats said no more than 18,000 people would pay the tax, or fewer than 0.25% of Washington residents.

"Our hardworking Washington families are ready for us to reform and rebuild our tax code," Robinson said during the debate on the Senate floor. "They are asking for the wealthy few to be part of equitable investments in our state’s future."

During the debate, Republicans argued that the tax is a gateway to a broader tax on income. They also said they think the tax violates the state constitution. Past state court decisions have defined income as property that can't be taxed at differing rates, foiling some attempts to enact taxes that affect only the wealthy.

"It is clear to me that there is a hope this will go to the Supreme Court," said State Sen. Ann Rivers, R-La Center, who voted against the measure. The tax, if it passes the House and is approved by the governor, would take effect in January 2022, with the first payments due in early 2023.

Meanwhile, another rendition of a capital gains tax is working its way through the state House. That measure, sponsored by state Rep. Tana Senn, D-Mercer Island, would spend half of the capital gains tax revenue on child care programs, depositing the money into a special account dedicated to that purpose. The other half of the money would flow into the state general fund, which underwrites most functions of state government, including paying for K-12 schools.

Senn’s bill, House Bill 1496, has different tax rates and exemptions than the proposal in the Senate. Her plan would impose a 7% tax on capital gains from real estate investments and a 9.9% tax rate on profits from other types of transactions, such as sales of stock.

Under Senn's proposal, people who make less than $200,000 per year from capital gains would be exempt, as would married couples with less than $400,000 in capital gains income. Home sales would be exempt only if the seller lived there for two of the past five years and the selling price is $5 million or less. This plan would raise about $800 million per year.

A separate proposal, sponsored by Sen. Bob Hasegawa, D-Seattle, would tax capital gains as part of a plan to expand public health care. That measure has yet to have a committee hearing and it doesn’t appear that it will advance this session.

This is the new kid on the block when it comes to plans to tax the rich in Washington. The measure, sponsored by state Rep. Noel Frame, D-Seattle, is simple in that it would apply a 1% tax to all Washington residents whose worldwide wealth exceeds $1 billion.

The structure of Frame’s tax appears to try to get around that by imposing a flat, 1% tax on everyone, while simply exempting everyone who has less than $1 billion in worldwide assets.

“The Legislature’s power of exemption is quite broad,” Frame wrote in a recent text message, when asked about the tax’s legality.

Republicans are not convinced; they have said they suspect the measure would amount to an illegal income tax.

The 1% wealth tax would apply to the worldwide market value of a billionaire's "intangible assets," to include cash or cash equivalents, stock, bonds, commodities contracts, and stakes in certain types of business partnerships.

As written, the measure would raise about $2.5 billion a year, according to a state fiscal analysis.

The state Department of Revenue estimates that fewer than 100 people would be affected by the tax in Washington state.

Frame said the confidentiality of taxpayer data means that those individuals’ identities aren’t disclosable. But she said she thinks that Amazon founder and CEO Jeff Bezos, the world’s richest man, wasn’t included in the Revenue Department’s estimate of how much the wealth tax would raise, based on her rough math.

A 1% tax on Bezos’ total wealth, which sources such as Bloomberg have pegged at about $190 billion, would amount to $1.9 billion a year. Bezos recently announced he plans to step down later this year as Amazon's CEO, but will remain involved in the company by becoming executive chair of the Amazon board.

Technically, this measure does not yet exist. As of Tuesday, Feb. 16, it had yet to be formally introduced, even though it has been a topic of discussion behind the scenes for months.

The idea would be to charge large businesses a payroll tax based on how many of their employees receive high salaries. Under a draft proposal that was circulating in December, the tax would apply only to businesses with annual payroll costs of at least $7 million. Businesses would pay the tax on the portion of an employee’s salary that exceeds $150,000, according to the early draft of the bill — not on the entire salary.

The Seattle City Council recently passed a similar tax, with a few key differences. For one, state officials appear to be considering a lower tax rate than what Seattle officials approved. The draft version of the statewide measure would impose a top tax rate of 0.5%, while the top rate under Seattle’s new measure, called the “JumpStart” tax, is 2.4%.

Additionally, the statewide proposal would — naturally — apply statewide. But state lawmakers are closely examining how such a tax would interact with the local one now in place in Seattle.

Lawmakers working on the statewide policy say they are hesitant to layer a new state tax over Seattle’s. But they also don’t want to abruptly cancel Seattle’s tax, fearing that would negatively affect city programs and hurt the city budget.

It’s possible those complications, combined with other factors, could make a statewide payroll tax difficult to pass this year.

At least one proposal aims to increase taxes on wealthy people’s estates that they pass on when they die. House Bill 1465, sponsored by state Rep. Tina Orwall, D-Des Moines, would increase the tax rate on estates valued at $3 million or more. While right now the highest tax rate applied to wealthy people’s estates is 20%, Orwall’s proposal would increase the maximum tax rate to 40%, which would apply to estates worth at least $1 billion.

Other changes to the estate tax may be proposed as the legislative session continues. Lawmakers may also introduce new taxes as they flesh out a new two-year state operating budget later this spring.

The Legislature is scheduled to adjourn its current 105-day session in late April.