A new book puts homelessness at the center of Seattle history

Local author Josephine Ensign reveals how the city’s long legacy of poverty is crucial to understanding our current crisis. 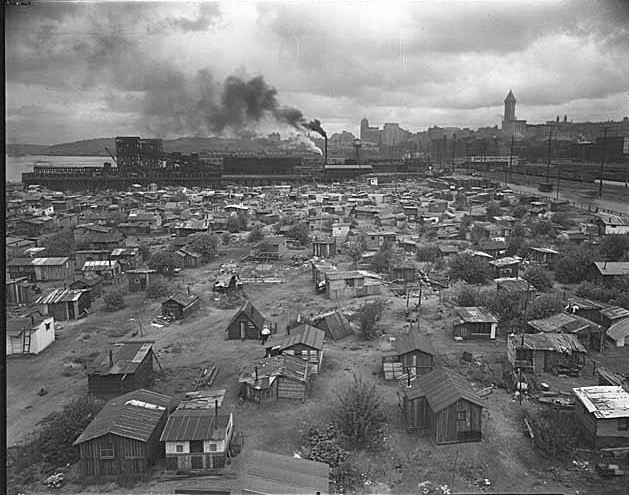 This 1933 photo, taken at Seattle's Hooverville, shows the small houses scattered between the roadway and the waterfront. (PEMCO Webster & Stevens Collection, MOHAI, Seattle)

In 1951, author and historian Murray Morgan published a book called Skid Road: An Informal Portrait of Seattle, which to this day remains one of the most celebrated treatments of our city’s history. Propulsive and bursting with rich narrative detail, it tells the story of Seattle’s first century through the lives of David Swinson “Doc” Maynard, an early white settler, and “the men like him, the ones who weren’t quite respectable but helped build the great city of the Northwest.”

Seventy years later, Josephine Ensign, a professor of nursing at University of Washington, has published a book by the same name. It borrows the spirit and sensibility — and even the first sentence — of Morgan’s bestseller, but has a wholly different aim. Released in August, Skid Road: On the Frontier of Health and Homelessness in an American City details the trauma experienced by poor and marginalized people throughout Seattle history, and the health care workers and institutions that have responded to their woes.

Unlike Morgan, who tied his telling of Seattle’s past to the boom-and-bust arcs of mostly influential men, Ensign chronicles the legacy of “overlooked and unheard people living and dying at the margins.” The difference in emphasis is notable and timely and makes for an important new “narrative history,” as Ensign calls it. While the focus lies not on solutions or even strategies for addressing homelessness, her historical perspective sheds light on the dire humanitarian issues facing us today.

The new Skid Road arrives at a time of unprecedented suffering on the streets of Seattle. Six years after declaring a state of emergency, the city has the third-highest number of homeless people in the country, after liberal mega metropolises New York and Los Angeles. Forced reductions in shelter space caused by the coronavirus pandemic have led to an explosion of tent encampments in neighborhoods across the city. In the book’s opening pages, Ensign points out an unavoidable truth of our times: “The marginalized and the margins in which they are located in many ways define, or literally frame, our collective lives.”

At the outset, Ensign asks, “How do we reconcile the fact that Seattle is both a progressive, hopeful city and a place in which homelessness is such a large, growing, and deeply entrenched problem?”

The answer, if there is one, is buried in a long, volatile history. From Henry Yesler’s sawmill to Jeff Bezos’ Amazonia, city neighborhoods have long been populated with homeless people. (This corner of the world, Ensign is careful to remind us, was first home to Indigenous peoples, who according to some estimates have lived in Puget Sound for over 12,000 years.) After white settlers arrived, in 1852, she writes, it did not take long before the city’s white and Indigenous residents became aware of “a wandering destitute fixture” named Edward Moore. He was King County’s first official homeless person.

Through historical records — some old, some newly discovered — Ensign learned that Moore, a 32-year-old sailor, lived in a makeshift tent on Seattle’s working seaport, at the corner of Lenora Street and Alaskan Way, just north of Pike Place Market. Moore washed up or was abandoned here by his captain after a shipwreck 164 years ago. When settlers discovered him on a damp December in 1854, his feet, severely frostbitten, were wrapped in rags. The community had no hospital, so they carried him to the town’s only rooming house. There, Ensign writes, “Doc” Maynard, one of Seattle’s founding fathers and the hero of Murray Morgan’s history, “promptly amputated most of Moore’s toes with an ax.” Several years later, Moore, who likely suffered from PTSD and schizophrenia, hanged himself.

Ensign sets this story as the dawn of Seattle’s history of homelessness. The timeline unfurls with researched descriptions of more residents struck by severe hardships: domestic violence, forced marriage, sexual assault, rape, suicide, infectious disease and countless other indignities thrust upon poor people by the strictures of class, gender and race.

Some of the homeless people profiled in Ensign’s book persevered through the torment and lived to old age; others had their youth stolen from them by predatory men; still others died far too young, often tragically.

Mercifully, beams of light occasionally pierce the darkness of this disturbing history. One of them is Ensign herself, whose own experience of homelessness and her nearly 40 years as a public health nurse serving marginalized populations make her a capable and compassionate guide. Beyond introducing readers to a cast of remarkable characters, she walks readers through the development of the legal and health care infrastructure tasked with tending to the indigent and mentally ill — a fascinating history that explains, among other things, the beginning of Harborview Medical Center and the much-troubled Western State Hospital.

At times Ensign’s dispassionate tone — likely a scholarly habit — can feel off key, discordant with the wrenching reality of her material. (It occasionally lands with a thud, as when she writes, “If we can view homeless teens as more than victims and vectors and give them opportunities … we will all be better off for that investment.”) But Ensign’s devotion to her subjects is palpable, as are the rigor of her research and the care she has shown in telling the stories of marginalized people long dead or still alive.

Ensign’s Skid Road exposes the entrenched roots of our contemporary crisis. She reveals how physical, visible sites of destitution — and the misery they contain — have long been features of Seattle’s landscape: shantytowns, the sprawling Hooverville, tent encampments, tiny villages, shelters, doorways, abandoned homes, vehicles, rundown RVs. She then humanizes this topography by adding flesh and bone and heart to some of the homeless people who have experienced it. 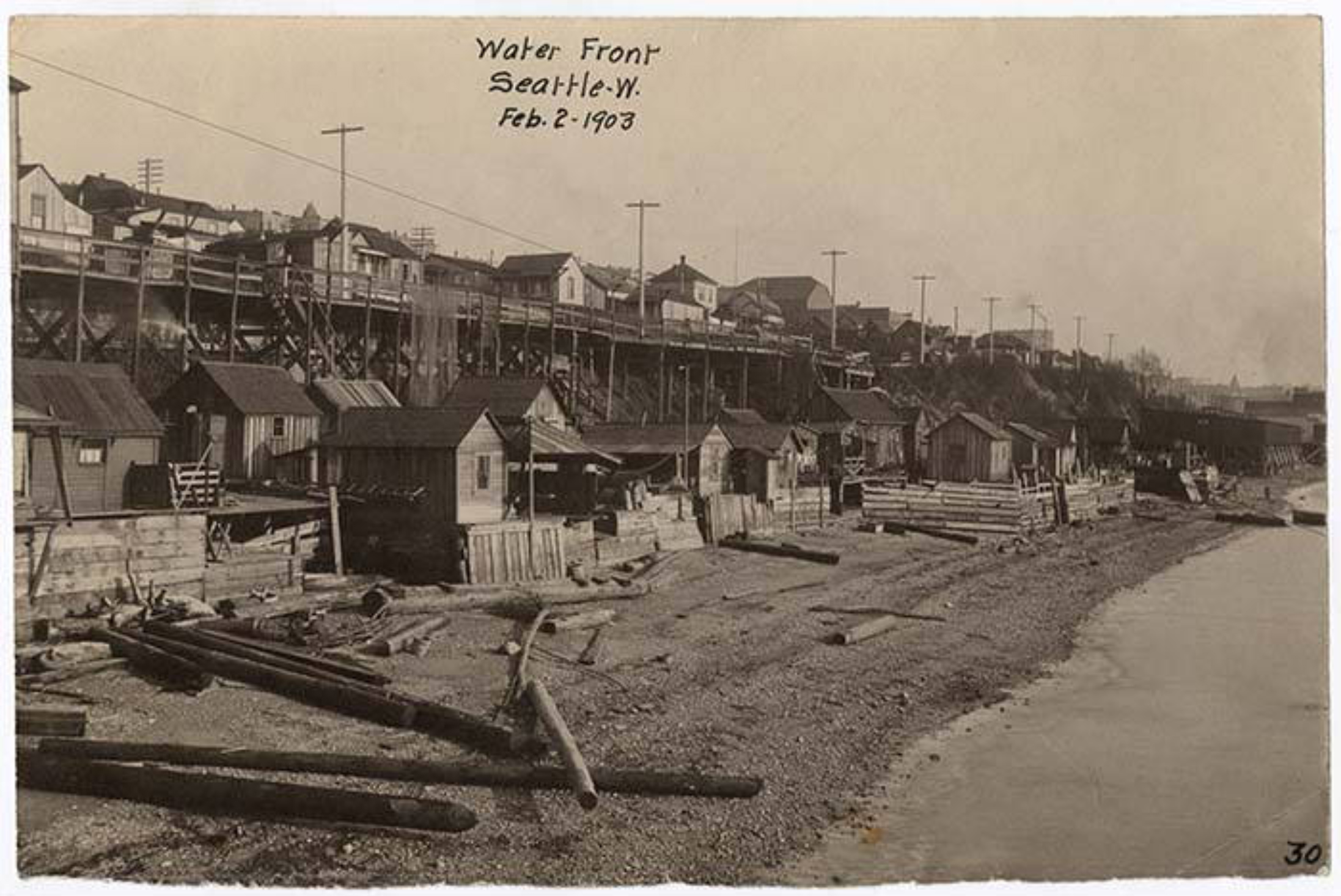 In the 1890s the waterfront from Pike Street north to Broad Street had developed into a community of small homes made from scrounged materials, including those deposited by the tides. Chief Si'ahl's (Chief Seattle) daughter Kikisoblu (Princess Angeline) continued to live in the area until she died in 1896. (MOHAI, Benjamin Pettit Photograph Collection)

In the 1890s the waterfront from Pike Street north to Broad Street had developed into a community of small homes made from scrounged materials, including those deposited by the tides. Chief Si'ahl's (Chief Seattle) daughter Kikisoblu (Princess Angeline) continued to live in the area until she died in 1896. (MOHAI, Benjamin Pettit Photograph Collection)

In addition to Edward Moore, she also profiles, in one especially stunning chapter, the life of Kikisoblu, Chief Sealth’s beloved daughter, aka “Princess Angeline,” who worked as a laundress and lived in a one-room shack on the shoreline. In other chapters, we meet Hazel Wolf, a shantytown resident and member of the Communist Party who agitated to stop evictions in Seattle’s infamous Hooverville; and Erin “Tiny” Blackwell, a 13-year-old girl, who, along with scores of other teenagers subject to prostitution and violence, lived on the streets of downtown Seattle in the 1970s.

Born in Richmond, Virginia, Ensign grew up in a family “riddled with Christian zealots, ministers and missionaries,” which she wrote about in her 2016 memoir, Catching Homelessness: A Nurse’s Story of Falling Through the Safety Net, chronicling the years she spent leading a clinic for homeless people before becoming homeless herself. Now, she is no longer religious, but echoes of her past faith can be heard throughout Skid Road. In her opening pages, as she walks the Seattle waterfront in search of the area where Edward Moore was discovered, she asks herself: “Am I my brother’s keeper? Are we our brothers’ and sisters’ keepers?” With biblical overtones, the questions encourage readers to consider the chapters that follow not only politically and economically, but also spiritually.

That perspective is fostered by Ensign’s humanism, which pervades these pages. Unlike the platitudinal pseudo-journalism of a documentary like KOMO’s Seattle Is Dying, Skid Road models an emotional and intellectual orientation for confronting homelessness that both takes seriously the issue’s complexity and honors the depths of suffering it causes.

The history of poverty in Seattle as Ensign tells it is brutal — I could not read this book in one sitting. After particularly difficult chapters, a sense of despair lingered for days. But what kept me reading was the overwhelming sense of discovery that attends these pages and made me ask, again and again: “Why didn’t I know this?”

This is not a civic history that extols the accomplishments of white settlers, our feats of structural engineering or our identity as a bastion of progressive politics. It’s not the rollicking remembrance of hardscrabble pioneers and other men of influence that fueled Murray Morgan’s famous history. On the contrary, it complicates the stories Seattle likes to believe about itself. It asks us to consider the poverty and violence, the illness and death that have been a constant throughout the life of this young city.

The people populating this book cast long shadows that extend far beyond their individual lives. Trauma, Ensign argues convincingly, lies at the heart of this pioneer city, and its haunting chill can still be felt today. What we do about it is the most defining challenge of our time.

Josephine Ensign will discuss Skid Road: On the Frontier of Health and Homelessness in an American City during a livestreamed event hosted by the Seattle Public Library on Wednesday, Oct. 20, 6-7 p.m. Register here.