In Seattle, 1918 Armistice Day led to celebrations — and a surge of flu

Celebration broke out on Armistice Day, and city residents seized their freedom, but at a cost. 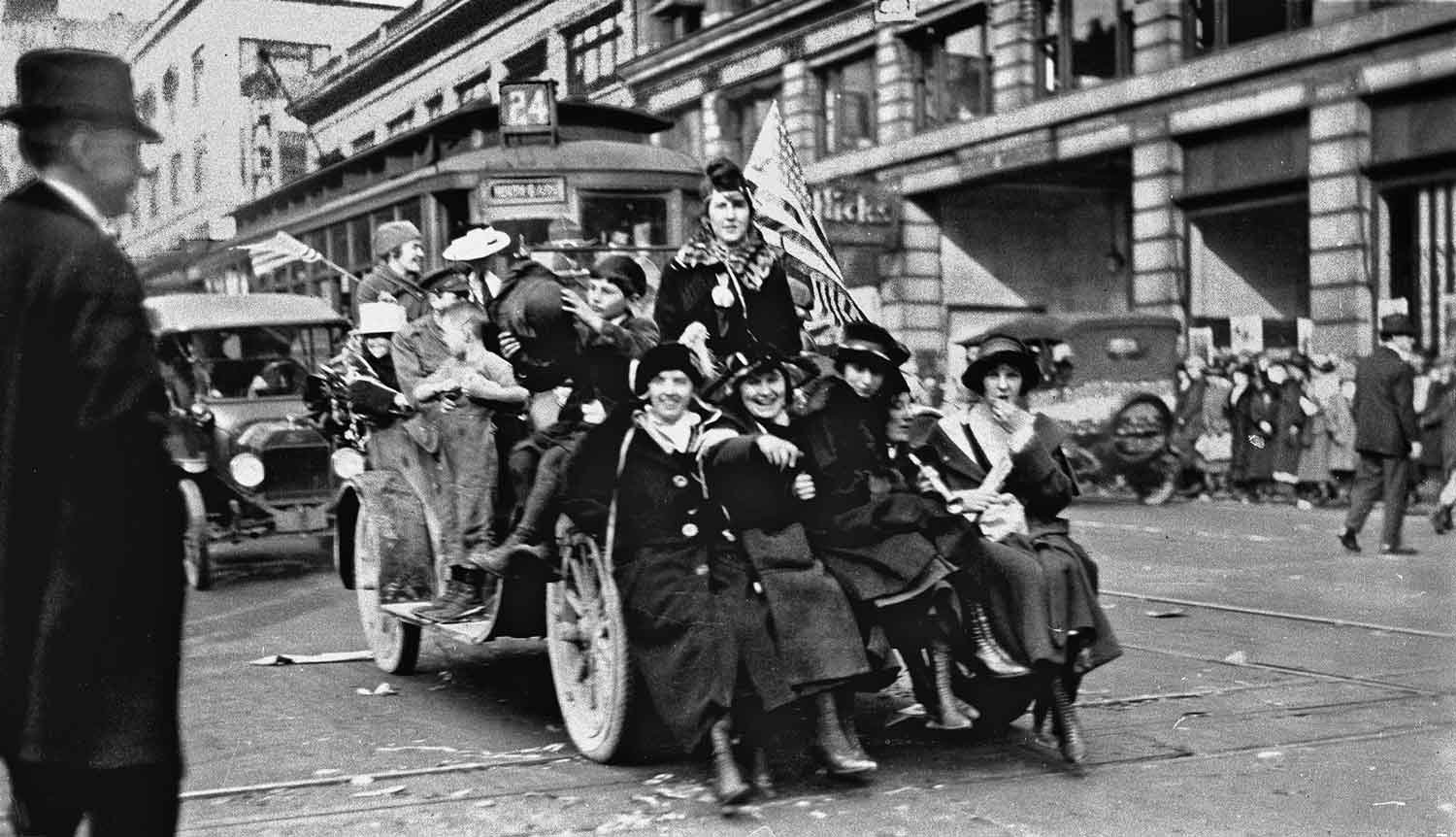 In November of 1918, Seattle was growing restless. For nearly five weeks, social life, schools and churches had shut down in an unprecedented effort to prevent the spread of a deadly influenza pandemic. How long the mask mandate and ban on public gatherings would last was unknown. To a city that had never experienced this before, the restrictions seemed interminable.

While Seattle was mostly mask compliant — unlike San Francisco, where there was an organized anti-mask effort —residents had begun to lose patience with the uncomfortable face coverings. They were heavy, four- and six-ply cotton masks, to be worn in public at all times. On Nov. 8, the Seattle Post-Intelligencer reported that many shipyard workers were “having difficulty obeying the state health department’s mandate regarding wearing masks.” Workers complained that the masks were hard to find, despite thousands of face coverings provided by Red Cross volunteers.

Frustrated authorities began to crack down on so-called “mask objectors.” A federal draft board using city facilities was shut down because the workers there refused to wear masks. And, for the first time, police issued a warrant for arrest of one N.S. Andrews, a driver for a shipyard jitney service, who was ticketed for failing to wear his face covering and skipped his court date. It was the first warrant issued by the state for such a violation. The fine: $25, the equivalent of about $450 today.

A letter sent to the P-I from an army corporal stationed in New Jersey ridiculed the city for its anti-flu efforts, especially the masking of its citizens. The "Queen City bartered her crown for a mask. … Eastern cities have been hit much harder than Seattle, but ‘business as usual’ is still their slogan. There were no signs of hysterics and the jazz bands played merrily on. … Future suffragettes in the full beauty of youth unmarred by time or mask went their way …, while in Seattle an outside observer would think himself transported to Turkey.”

But one big event caused Seattle to throw caution — what remained of it, at least — to the wind. In the wee hours of Nov. 11, news of the armistice hit town — the end of World War I. The Seattle Star rushed to the streets with news: The war was over! At 2:30 a.m. Monday, the 11th, celebrants hit the streets.

As day turned to dawn, the celebratory momentum increased as people woke to the news and clamor. Seattleites who had been denied public gatherings threw off their traces — and their masks — with the thrill of victory.

The day that dawned was dry and “sunshiny,” and an unparalleled state of “ecstasy” took hold in the streets, as one newspaper reported. “By a sort of spontaneous combustion of Seattle’s heart and soul," wrote The Seattle Times, "it grew from nothing into cheering thousands of marchers and screeching hundreds of automobiles; into waving flags, patriotic music, confetti, singing girls and floats telling the late unlamented Kaiser a good place to go.”

Some 5,000 cadets from the quarantined naval and aviation training school at the University of Washington spilled into the streets with their band and marched along Eastlake to downtown. Steam whistles, horns, sirens and blasts filled the air. The UW’s bells played “Bow Down to Washington,” the school’s fight song. Mayor Ole Hanson, apprised of the hubbub, declared, “The lid is off!” and joined the throngs. Gov. Ernest Lister declared a holiday, so newly opened shops and offices closed and sent their employees to join the celebratory hordes.

As the cadets swarmed in from the University District, they merged downtown with some 15,000 shipyard workers, arriving from what is now SoDo. “By 10 o’clock this morning,” reported The Times, “the city was delirious with joy and Second Avenue a howling, shrieking bedlam.” The paper called it “the greatest demonstration in the city’s history.”

Official medical advice still cautioned against crowds, and the mandate to wear masks remained in place. But all that was over. “Even influenza masks were forgotten,” The Times said, “except that they were used instead of handkerchiefs and waved from windows and doorways by cheering clerks and other operators who had not joined the paraders.”

Nov. 11 newspaper editions carried the news that the shutdown mandates were going to be lifted the next day. However, the city’s health commissioner, Dr. J.S. McBride, urged the city to keep the mask mandate in place. And for good reason: The anti-pandemic efforts were working. Deaths and new cases dropped dramatically in the five weeks of masks, restrictions and social distancing. In loosening up, McBride said, “We warn people that all danger is not over and if the gauze mask order is not obeyed to the letter it will be necessary to put the ban back on. … Although theaters will be open, over-crowding will not be tolerated. The people must not lose their heads.”

Still, on Nov. 12, the city lifted its restrictions, despite McBride’s warnings; officials claimed it was unenforceable. Mayor Hansen, under pressure to return to normalcy from the business community, insisted Seattle do the same, and an unhappy McBride went along. The P-I wrote, “The city is hoping never again to hear the word influenza and the command to don a face apron.”

The lifting of the ban, The Times reported, was “a double cause for celebration.” As historian Nancy Rockafellar has written, “Seattle was able to equate victory over the Hun with victory over the flu.”

Residents, feeling liberated, flocked to theaters and ramped up gatherings. “Seattle, now unmuzzled, put on the day resting tired feet at the movies,” observed the P-I. Theaters were jammed, so were stores that returned to full hours. Public transport was full and “not a mask was in sight,” the P-I reported on Nov. 13. Schools were slated to reopen the following day.

With the holidays ahead, celebrations were far from over.

In the days that followed the Armistice, Seattle citizens seized upon their own sense of liberation. Amid the euphoria, McBride must have been discouraged. He had steered Seattle through the beginning of an unprecedented pandemic — one complicated by an unknown disease and the demands of wartime with a woefully understaffed office. In a December 1918 profile in the Times, the paper wrote that McBride “has been discussed and cussed, lauded and censured, helped and hampered, and he and his office force have been worked from early morning until late at night — all because of influenza.” He had shut the city “tight as a jug. Then came freedom.”

Ah, freedom. It came at a price. The armistice was followed, predictably, by a second surge of disease. The death toll peaked a month after the end of the war. Cases and deaths continued into 1919. More than 1,000 residences were quarantined. Half of school kids were kept home by fearful parents, even though schools reopened. The so-called Spanish influenza stuck around until spring and derailed Seattle’s hopes of a second Stanley Cup by sickening the players and coaches.

Slowly, the disease petered out. In terms of death rates (measured by deaths per 100,000), Seattle fared much better than San Francisco, eastern cities like Boston and Philadelphia, and regional neighbors like Spokane and Portland. Seattle’s “hysterics,” as critics called its health mandates requiring distancing and masking, had saved lives. If these measures had continued after the Nov. 11 armistice, many more might have lived.

World War I wasn’t the “war to end all wars.” And the 1918 flu, which eventually killed nearly 700,000 Americans and millions more around the world, wasn’t the last pandemic. Nov. 11 is a good time to remember the joy and tragedy of 1918 — and its still-resonant lessons.