As governor, Inslee pushed hard for Boeing to get an $8.7 billion tax deal. Now, as he runs for president, he compares the experience to being 'mugged.' 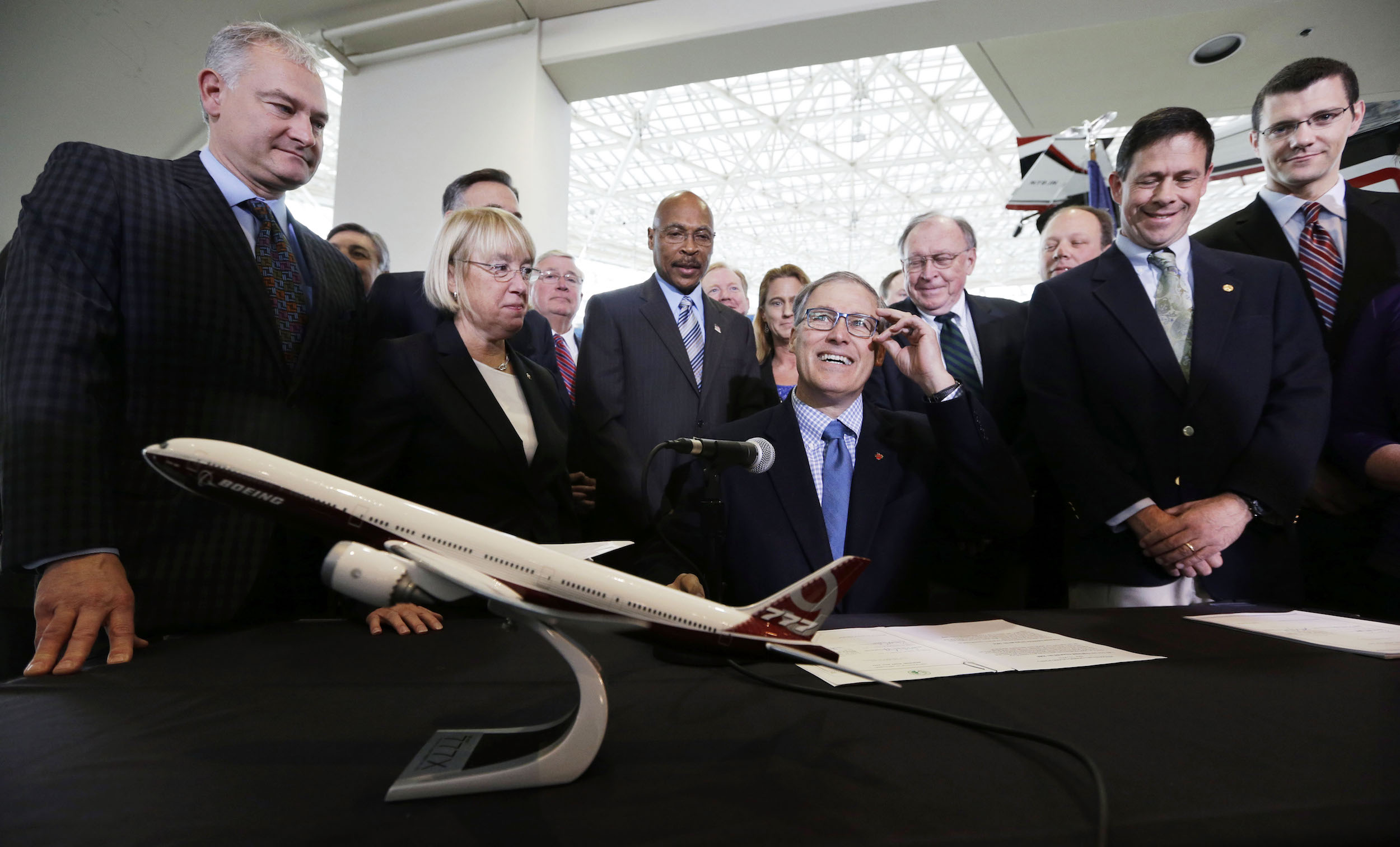 The day Gov. Jay Inslee signed a bill providing more than $8 billion in tax breaks for Boeing, he called the package “a great step forward for the state of Washington.” Surrounded by dignitaries at Seattle’s Museum of Flight, the governor praised the legislation as an example of how “the Democratic process worked” in his home state.

“This is a great day, because what happened in Olympia the past few days allows us to continue a great Washington state tradition, and that is to lead the world in aerospace,” Inslee pronounced then, in November 2013, shortly before signing the largest state tax break awarded to a corporation in U.S. history.

Six years later, the Democratic governor is running for president of the United States, and painting a very different picture of how the $8.7-billion Boeing deal went down.

During an interview this week, Inslee told The Daily Show host Trevor Noah that he “was not happy with the Boeing situation,” and compared it to being robbed at gunpoint.

“If you’ve ever been mugged, you understand what it feels like,” Inslee said. “...These corporations put a gun to your ribs and say you’re going to lose 20,000 jobs unless you get [them] a tax break.”

That rhetoric is perhaps the governor's starkest condemnation yet of the Boeing tax package, which he championed and urged lawmakers to approve during a whirlwind three-day special session in 2013. The deal required that Boeing build the wings of its 777X aircraft in Washington state, and also keep the final assembly of the new 777X aircraft in Washington. After the deal passed, however, Boeing still moved thousands of other jobs out of the state, prompting some questions about whether the deal's accountability provisions were strong enough.

Occasionally in the years since, Inslee has criticized the pressure on states to provide corporate tax breaks, but maintained that the Boeing tax package was the right thing to do. In a 2015 interview with The Boston Globe, Inslee compared the competition between states to offer corporate tax incentives to “extortion,” while still describing the Boeing deal as a good move for Washington. Inslee again defended the tax package as the right thing for the state in 2016 and 2017.

Now, Inslee — one of more than a dozen Democrats seeking his party’s presidential nomination — seems to be distancing himself more forcefully from the aerospace giant. Up against the likes of Wall Street-bashing candidates such as Bernie Sanders, Inslee is now using the Boeing deal as an example of his real-world experience dealing with corporate extortion — and as an example of the kind of interstate competition the federal government should intervene to stop.

At least twice in the past five weeks, Inslee has suggested the federal government should prevent corporations from shopping around to see which states can offer them the best tax breaks. In his interview with Noah this week, he said corporations shouldn’t receive those types of tax preferences.

“We should use the tax code so taxpayers aren’t victimized like that,” Inslee said. “...No local community should  be blackmailed by any corporation.”

Inslee has not elaborated on what such a federal policy might look like. A spokesman for his campaign, Jamal Raad, said the governor has some ideas “that we will roll out in due time.”

Inslee’s televised comments on the Boeing deal came on the heels of a second fatal crash of Boeing’s 737 Max, as well as the grounding of the planes by the Federal Aviation Administration.

To some, Inslee’s evolving disgust with the Boeing deal rings hollow, especially given that the governor convened a special session of the Legislature specifically to pass the aerospace tax incentives six years ago.

Senate Minority Leader Mark Schoesler, a Ritzville Republican who was involved in the negotiations of the tax package, called the governor’s recent comments “revisionist history.”

“He made the deal and brought it to us for refinement,” said Schoesler, whose mostly Republican coalition controlled the state Senate in 2013. “He gave glowing reviews to his deal. He took credit for it. And now, as a presidential candidate, there is a different Jay Inslee than the one that made that deal.”

Others say that while politicians wore smiles and delivered glowing remarks at press conferences back in 2013, behind the scenes Boeing was deploying strong-arm tactics. Sen. Reuven Carlyle, D-Seattle, who sponsored the Boeing tax incentive bill when he was a member of the House, called Boeing’s negotiation tactics to push the package through in a matter of days “absolutely ruthless.”

“Nobody felt good about it,” Carlyle said.

Carlyle said he was confident Boeing would have moved substantial operations out of Washington state had the tax package not been approved. At the time, Inslee talked about the deal being tied to about 56,000 jobs.

“I believe that threat was true,” Carlyle said. “I was not willing to play Russian roulette with a large percentage of our entire economy.”

Boeing declined to comment directly on Inslee’s or Carlyle’s remarks when reached this week, except to play up the company’s economic contributions to Washington state in recent years. In an emailed statement, Boeing spokesman Paul Bergman said the company paid out more than $8 billion in wages to Washington residents in 2018, while serving as the backbone of an aerospace industry that generates about $93 billion in annual economic activity in the state.

Larry Brown, the president of the Washington State Labor Council, said he was aware there was intense pressure on Inslee and state lawmakers to pass the Boeing package back in 2013. At the time, Brown was the legislative and political director of the Boeing Machinists union, which was asked to approve a new contract extension as part of the deal with the company to keep the 777X wing and final assembly in Washington state.

Brown said he doesn’t recall Inslee expressing regret at the time when the tax package passed the Legislature.

“He was very enthusiastic about the deal back then,” Brown said.

But Brown said he understands why Inslee’s attitude might have shifted in the years since. After all, he said, it didn’t take Boeing long to start moving non-Machinist jobs out of Washington after the deal was passed.

“To be fair, he probably didn’t think his reward for doing this would be all these jobs leaving the state,” Brown said of the governor.

Since 2013, Boeing has also reduced its Washington state workforce through attrition, buyouts and layoffs.

In an email, Jaime Smith, a spokeswoman for the governor’s office, downplayed the significance of Inslee’s latest remarks about Boeing, saying the governor has “talked in strong terms before about corporations playing states against one another and threatening to leave.” She mentioned his 2015 “extortion” comment to The Boston Globe as an example.

“Not sure where extortion, robbery and mugging all sit on the continuum of strong rhetoric, but they’re all there,” Smith said.