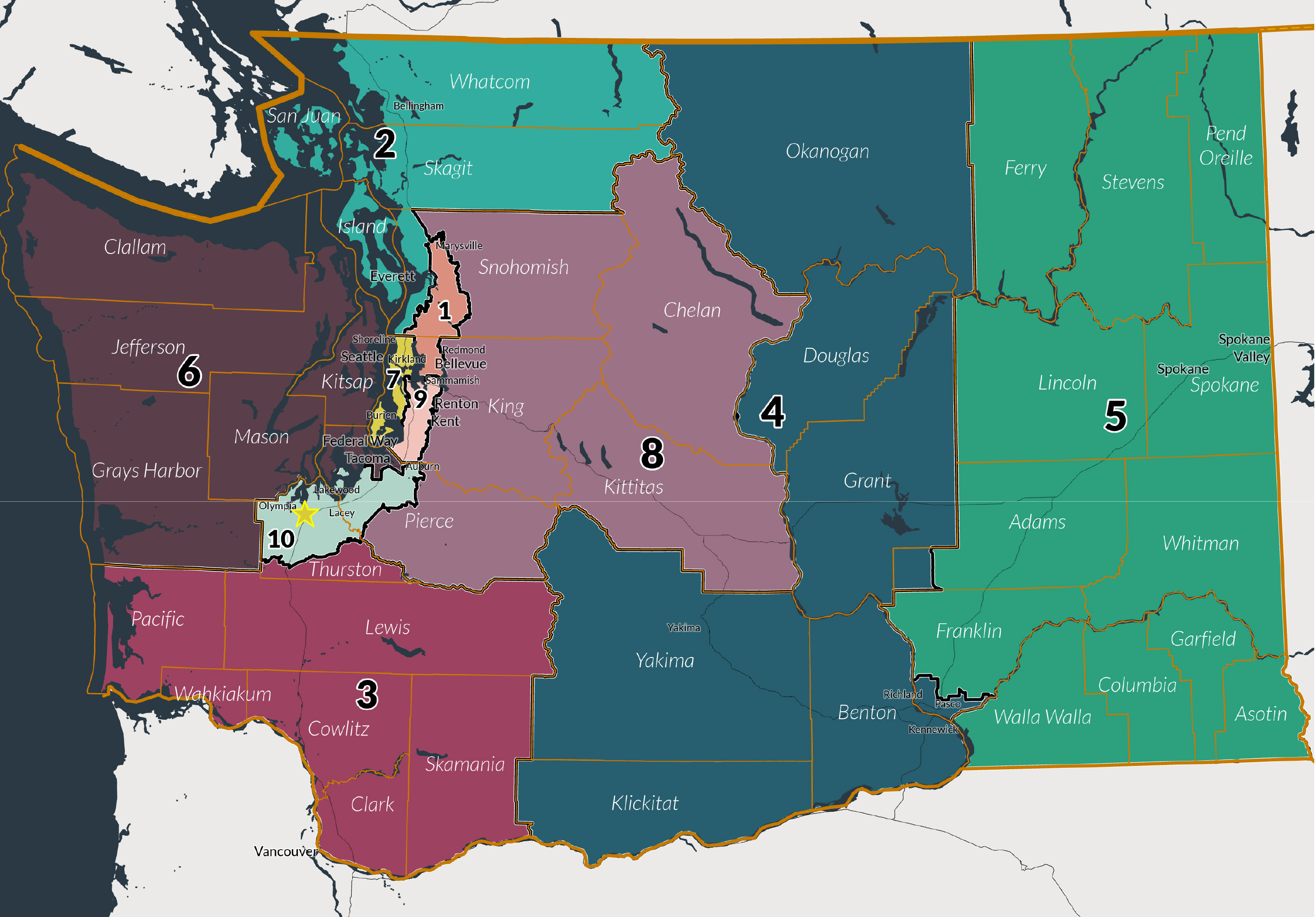 This is the Washington State Redistricting Commission's proposed map for the state's 10 congressional districts.

A new lawsuit argues that members of Washington state’s bipartisan Redistricting Commission broke the law by crafting new political maps in secret — and that their work should be thrown out as a result.

The allegations of secret deal-making, outlined in a complaint filed Thursday by the Washington Coalition for Open Government, are backed up by screengrabs and other information legislative staffers provided to Crosscut this week.

Three legislative staffers told Crosscut that the commissioners made various decisions about how to draw new legislative and congressional district lines in private, out of public view. Many of those decisions were made after midnight Nov. 15, the commission’s constitutional deadline for completing its work, said the staffers, two of whom asked to not be identified because they didn’t have permission to speak publicly.

The Washington Coalition for Open Government's lawsuit says the commission’s behind-the-scenes deal-making violated the state’s Open Public Meetings Act, which requires deliberations and decisions to occur in the open.

If the coalition’s lawsuit prevails, a judge could strike down the commission’s newly crafted congressional and legislative district maps, forcing the commission to redraw the lines. The nonprofit filed the lawsuit in Thurston County Superior Court, as well as with the state Supreme Court, which could decide to take up the matter directly.

“The commission damaged public trust in our system of governing, which always happens when secrecy prevails over transparency,” said Mike Fancher, president of the Washington Coalition for Open Government, in a news release announcing the lawsuit.

“... Our concern is that the commissioners convened a regular business meeting then conducted business and took action in private, not on the public record,” Fancher said.

The four voting members of the Redistricting Commission, April Sims, Paul Graves, Joe Fain and Brady Walkinshaw, declined to comment on the lawsuit. The commission’s executive director, Lisa McLean, wrote in an email that “the commission has received notice of the lawsuit and is consulting with counsel.”

Redistricting is the once-per-decade process in which political districts are redrawn to reflect changes in population, incorporating the latest data from the U.S. census.

How the lines are drawn determines who is eligible to run for seats in the state Legislature, as well as which political party has the advantage in a given district. Redistricting can also determine whether communities of color get split between districts, diluting their voting power.

The 2021 process in Washington state is the fourth that has been handled by a bipartisan commission.

It has been highly eventful.

At first, the commission’s four voting members conceded they didn’t meet their deadline for approving new congressional and legislative district maps. Following a process outlined in the state constitution, responsibility for redistricting then fell into the hands of the state Supreme Court.

But last week, the court declined to take on the task, saying it would accept maps the commissioners released a day after their deadline, on Nov. 16, as being finished on time.

That put those maps — and how they were developed — back in the legal spotlight.

The Redistricting Commission consists of four voting members, one appointed by each political caucus of the Legislature.

Leading up to the commission’s midnight deadline on Nov. 15, the commissioners met for five hours, but spent about 90% of that time out of public view, consulting in what their staff said were private “caucus dyads” — groups of two.

On Nov. 15, they emerged briefly before midnight, when they voted on an agreement they didn’t put in writing or share with the public. The commission then adjourned without explaining what it had voted on. Its members later postponed a news conference scheduled for the next day and instead issued a statement.

“It was an incredibly tense, chaotic environment with very little time or opportunity to ask questions or fully understand what was happening,” wrote Ali O'Neil, a Senate Democratic staffer who worked on redistricting, in a memo recalling the evening's events.

O'Neil added: “The agreement that the commissioners were voting to approve was not restated nor written down anywhere.”

In press interviews and public statements over the next two days, commission members clarified what, exactly, they had voted on. They said they approved a deal establishing the partisan metrics for key legislative swing districts — as in, how well those districts should perform for each of the political parties — but hadn’t voted on final maps.

The agreement the commission voted on was translated into final maps after the midnight deadline, after the commission’s public meeting adjourned, said Paul Graves, one of the Republican redistricting commissioners.

Graves told reporters at a commission news conference on Nov. 18 that this translation process didn’t involve any substantive decision-making by commissioners.

“They weren’t discretionary decisions — they were just decisions to make sure that, in the process of turning the agreement into the maps themselves, that [it] actually resulted in maps that met the specific agreement,” Graves said.

But staffers who worked with the commission that night tell a different story. All three who spoke to Crosscut said multiple versions of legislative map proposals were circulating after midnight, each of which would have complied with the partisanship requirements approved by the commissioners.

O'Neil said the commissioners and staff members had to gather in a room at the Hampton Inn in Federal Way after midnight to reconcile those different map proposals, making major decisions about specific district lines.

In a phone interview Friday, Graves had a different recollection of events, saying the commissioners were simply rejecting versions of maps that didn’t match the partisan metrics they had agreed on.

Leaked chats, texts and emails from Nov. 15 and Nov. 16 indicate some staffers also questioned the legality of the commission’s hurried, last-minute vote. In particular, staffers were concerned about the commission voting on a spoken agreement that wasn’t written down and that didn’t include finalized maps.

Some legislators have since echoed those concerns. “It is impossible to draw a map without making material decisions about where the lines are to meet partisan performance goals,” said state Sen. Jamie Pedersen, D-Seattle, who chairs the Senate Democrats’ campaign committee. Watching the redistricting commission in action was “almost like a coup was happening,” with the commission holding on to power by continuing to make decisions after its midnight deadline, Pedersen told Crosscut last month.

Republicans, meanwhile, have accused Pedersen and his colleagues of creating the conditions for the commission’s chaotic final meeting, saying that Senate Democrats delayed and frustrated efforts to reach a deal before the deadline.

Pedersen said he and other Senate Democrats probably felt more comfortable than some of the other negotiators in letting the state Supreme Court decide on final maps, but that was because they feared the commission’s map wouldn’t comply with the federal Voting Rights Act. Senate Majority Leader Andy Billig, D-Spokane, said he remains worried the commission’s plan doesn’t adequately empower Latino voters in Central Washington, where there is a large Latino population.

The lawsuit filed by the Coalition for Open Government doesn’t address whether the commission’s maps comply with voting-rights laws. But another lawsuit will likely be filed  challenging the maps on those grounds.

Redistricting Justice for Washington, a coalition of groups representing communities of color, has already said it intends to file a lawsuit alleging the commission’s legislative map violates the Voting Rights Act in the Yakima Valley.

This post has been updated to add the name of one of the staffers who agreed to be identified, as well as provide a link to a document that staffer wrote.