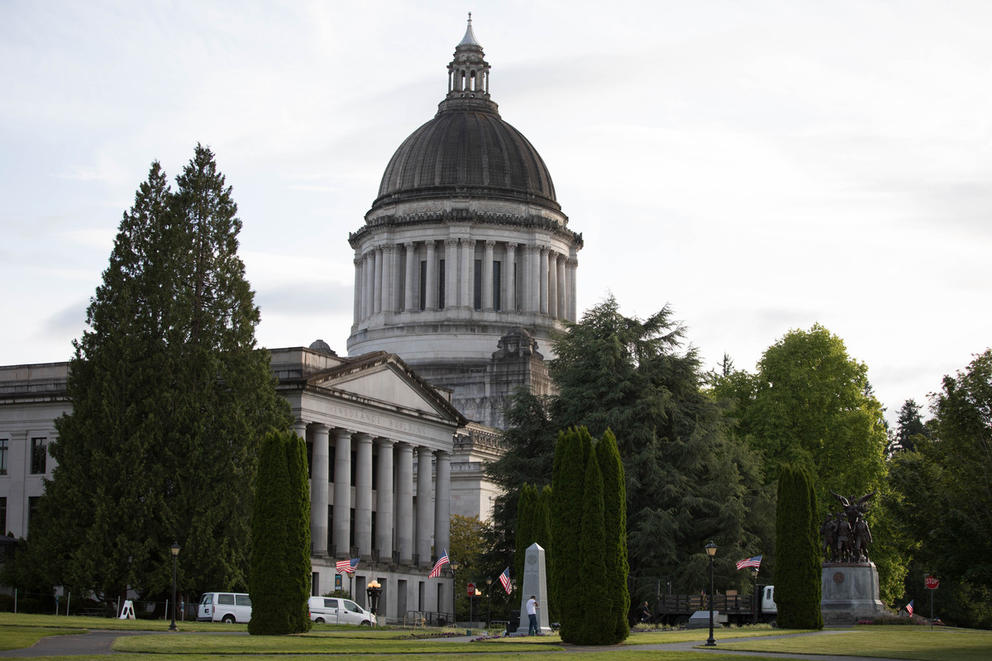 After five hours of meeting behind closed doors, Washington’s redistricting commissioners voted at roughly midnight Monday on new political maps they didn’t share or discuss in public, despite being obligated by state law to do so.

The four voting members of the commission had until the end of Monday to approve new congressional and legislative district maps and send them to the state Legislature.

But it wasn’t immediately clear whether the commission had completed its job or not. The two Democrats and two Republicans appeared to approve new maps with seconds to go until midnight, but it also appeared they didn’t vote to transmit them until after the midnight deadline had passed.

Then the commission immediately adjourned, without making the maps public — and without discussing whether members had successfully finished their work.

The four commissioners had spent most of the evening discussing matters privately, in what their staff said were groups of two. The state’s Open Public Meetings Act requires the redistricting commission to meet and make decisions in public, but the commissioners had virtually no public deliberation before their vote late Monday night.

If the commission didn’t complete the final maps and send them to the Legislature as required by law, it would mean that the state Supreme Court could be tasked with drawing new district maps — putting the judiciary in control of decisions that will shape the state’s politics for the next decade. That’s something that has never happened under the state’s current redistricting system, which Washington voters approved nearly four decades ago.

In the final minutes of their late-night meeting Monday, the commissioners made minimal comments about a handful of district boundaries that were still in flux.

Yet in recent weeks, one of the biggest disagreements was over whether to create a legislative district in the Yakima Valley where most eligible voters are Latino.

The two Republicans on the commission, Joe Fain and Paul Graves, had argued that crafting a district based primarily on voters’ race and ethnicity would result in racial gerrymandering, while hurting GOP incumbents in an area where Republicans have long dominated state legislative races. The Republican commissioners obtained their own legal analysis that bolsters this argument.

Redistricting is the once-per-decade process where political districts are redrawn to ensure each district has a roughly equal number of people, using the latest data from the U.S. Census. How these lines are drawn affects which candidates people can vote for, who can run for office, and which party has the political advantage in a given district.

In most states, redistricting is left in the hands of the Legislature, giving the party that controls the state Capitol the ability to skew maps in their party’s favor.

But in 1983, Washington voters approved the creation of a bipartisan redistricting commission, in an effort to introduce greater fairness to the process.

This year marks only the fourth time the state’s bipartisan Redistricting Commission has convened. Each time before, a majority of the commission’s four voting members have settled on a set of maps, avoiding the need for the state Supreme Court step in.

Meeting in groups of two may not technically constitute a secret meeting under the state’s Open Public Meetings Act, since a quorum would require three commissioners. But “it’s probably a violation of the spirit, if not the letter, of the law,” said Mike Fancher, president of the Washington Coalition for Open Government.

Under the state’s Open Public Meetings Act, members of voting bodies can retreat into private session only for specific reasons, such as to discuss pending litigation, real estate deals, or personnel matters. The commission provided none of those reasons before members retreated to discuss matters privately.

Jamie Nixon, a spokesperson for the state Redistricting Commission, said the commission didn’t hold a closed meeting, because the commissioners met in “caucus dyads” rather than as a full body. (The state public meetings act makes no mention of “caucus dyads.”)

Regardless, in the end, the public wasn’t able to watch commissioners discuss details of the redistricting plans, or their process for coming to a decision.

Sarah Augustine, the nonvoting chair of the commission, said the documents approved by the commission in its rush to meet its deadline will most likely be posted online Tuesday morning, but it wasn’t clear exactly when.

“Due to the late hour of approval of the required documents to meet the statutory deadline, the Commission is unsure when/if maps will be made available to the public,” Nixon, the commission spokesperson, wrote in an email.

“We will inform the public further as circumstances warrant,” Nixon added.

To those who have been watching the process closely, it might not be a surprise that redistricting decisions came down to the wire.  For the past several months, members of the redistricting commission have expressed somewhat different priorities when it comes to redrawing the state’s political lines.

The Republican appointees on the commission, Fain and Graves, had said they wanted to create more districts that are competitive swing districts, as opposed to safe seats for Republicans or Democrats.

The Democratic commission members, meanwhile, said they were focused largely on empowering communities of color and ensuring those communities aren’t split between districts, diluting their voting power.

While all four commissioners have said they want to create more so-called “majority-minority” districts, where people of color make up a majority of the population, they haven’t always agreed how to measure that.

In particular, they split over whether they should focus on creating districts where people of color make up a majority of citizens of voting age, or simply a majority of the overall population, to include children and non-citizens who can’t vote.

That disagreement was on full display in recent weeks, as the commissioners wrestled with how to craft new legislative districts in the Yakima Valley, an area that is heavily Latino  Barreto, the UCLA professor, said that to guarantee compliance with the federal Voting Rights Act, the commission should create a district that is majority Latino by citizen voting age population — not just by total population.

The legal analysis commissioned by Republicans argued otherwise, saying that constructing a district focused on a single racial and ethnic group risks violating the Equal Protection Act of the U.S. Constitution.

If the commission successfully sent its plans to the Legislature, the maps aren’t likely to change much. State law only allows the Legislature to make minor changes affecting up to 2% of the population of a district — and doing so requires a two-thirds vote of the Legislature, which is a high bar to meet.

If the commission missed its deadline, the state Supreme Court would be in charge of drawing up new maps, a process it must complete by the end of April 2022.

Yurij Rudensky, the redistricting counsel with the Democracy Program at the Brennan Center for Justice in New York, said it’s not uncommon for courts to finalize redistricting plans. It happens fairly frequently when state Legislatures can’t agree on new district lines, or sometimes when commissions like Washington’s fail to meet their deadlines, he said.

He said courts often draw fairer maps than state Legislatures do, from both a racial standpoint and a partisan standpoint. “Some of the abuses that happen in redistricting are just less likely to pop up when the judiciary steps in,” Rudensky said.

But, he added, Washington state’s bipartisan commission generally does “an OK job,” despite being “thoroughly political.”

“I generally think that courts try to do right by the law,” he said.

Whatever district maps the court would draw, they would be final, with no opportunity for the Legislature to make amendments.

This story was updated to include more detailed information about past redistricting processes.